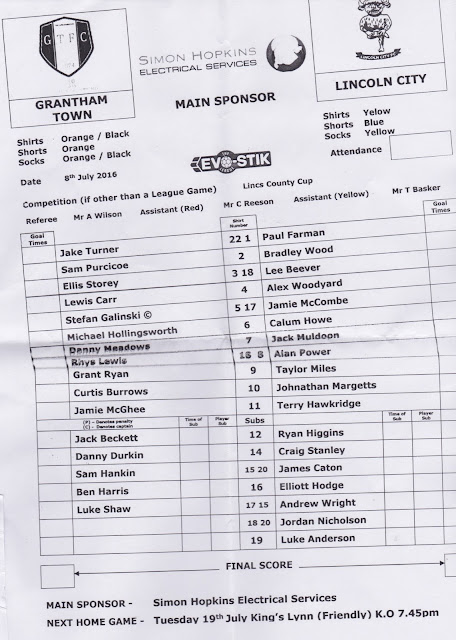 1:  Grantham Town were founded in August 1874 with their first match seeing them win a friendly game 2-1 against Third Lincs Volunteer Rifles.

2:  The club moved to the 7,500 capacity South Kesteven Sports Stadium in the early 90's after a spell sharing at Spalding United. Prior to that they played at their old London Road home where they had played since their early years;

3:  The great Martin O'Neill started his managerial career at Grantham Town. After a long period without success, the Irishman moved to the club in 1987. He missed out on promotion by a single point before going on to manage Wycombe Wanderers, Norwich City, Leicester City, Celtic, Aston Villa and the Republic Of Ireland national team amongst others.

4:  The nickname of 'The Gingerbreads' is said to have come from an error made by a local baker in the 1740's who whilst making Grantham Whetstone biscuits, mixed up the ingredients in error. The resulting creation, the Grantham Gingerbread proved so popular that it continued to sell and became a permanent fixture.

5:  The club's best ever FA Cup runs have resulted in them reaching the 3rd Round on 3 occasions. Twice in the 1800's, and most recently in the 1973-74 season. That game against Middlesbrough saw a credible performance in a 2-0 defeat and their record attendance at their old home of 6,573.

6:  In the FA Trophy Grantham Town have reached the Quarter Final twice. The most recent occasion drew the South Kesteven Sports Stadium's record attendance of 3,695 for the visit of Southport in 1998. The Gingerbreads drew 1-1 before going out in a replay on Merseyside.

7:  Grantham's best ever league finish came in 1974 when they finished as runners-up to Dartford in the Southern Premier. This was prior to the establishment of the Conference, and therefore was the joint highest league in non-league football.

10: The most famous person to come from Grantham was the divisive and controversial Prime Minster Margaret Thatcher who was born in the town in 1925 and ran the UK from 1979 until 1990.

Last season I attended a number of Friday night games and thoroughly enjoyed them as a way to wind down after a long and tiring week at work. I was keen to do the sane again this season and was very pleased when the Lincolnshire Senior Cup Quarter Final between Grantham Town and Lincoln City was scheduled for a Friday night in early July. It would be an interesting clash - not only was it a competitive game in a sea of Friendlies but it was the new Lincoln City management duo’s first game. Danny Cowley and his brother Nicky had moved to the Imps in May following a great season with Braintree Town in which the minnows finished 3rd in the Conference. Hopes were high amongst the Lincoln support of them finding the magic touch to propel them back into the football league following their relegation in 2011. Previous attempts had been way off the mark with last season’s 13th placed finish under David Moyses being their best so far. 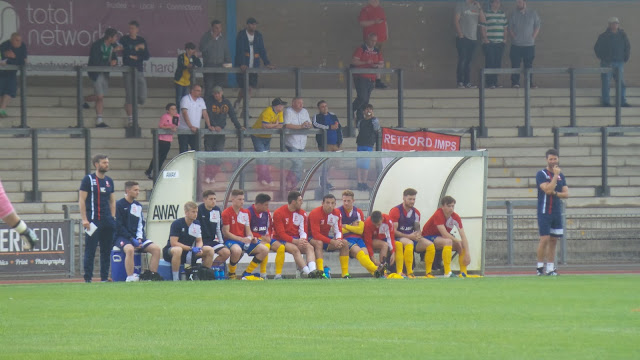 On the day of the game, work was a real grind as per usual, with absences meant that I had a load of extra work put my way and didn’t get out until over an hour after my shift was due to finish. I went home and checked out the FA Cup draws that had been released that lunchtime with an endless list of possible games for me to visit on August 6th. I’ll decide nearer the time though, once I know what games have been moved to Friday and Sunday. After I’d had a bath I made a start on my blog, but as time was tight I couldn’t get as much done as I wanted. I left home at 3.35, meeting Anwar in Aylesbury and before long we were on our way. 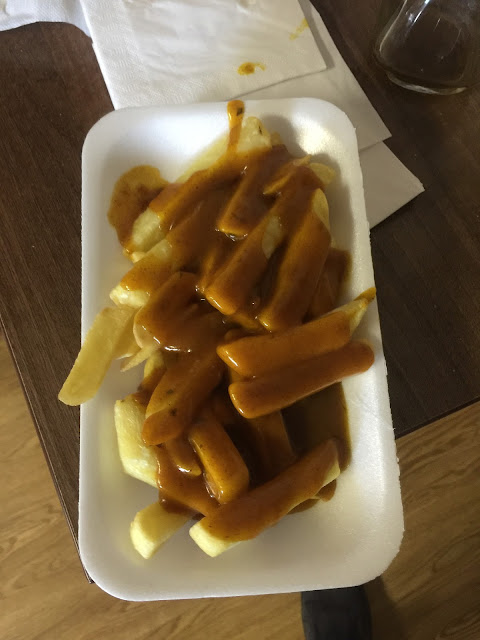 As expected in the Friday night traffic it was a frustrating journey over and there was an hour delay added to our journey as we crawled through various spots, mainly the A1. At one point it looked as if we would miss our pre-match meal but once the traffic cleared I started to make up time and we were in Grantham by 6.40. Previously the Tollemache Inn had been my favourite Wetherspoons in the chain, owing to it’s excellent drinks selection. But this time it was a bit of a let-down with them having none of the 23 ciders that I had remaining to tick in the festival on sale - instead having 6 of the 7 that I’d already had. Instead I had a retry of one of the weaker ones - Tempted Sweet Irish Craft and a Chicken Balti Curry which came in at under £7.50 for both. From there we left for the ground, getting there at 7.15 after a 10 minute drive.

We paid a tenner each to get in, which was just about reasonable enough. There were no programmes though, so I went up to the clubhouse and found a team sheet. It was a bit mangled and badly printed, but at least it was something and it was the only one available. I also got myself some curry sauce and chips for £2 as I was still peckish. After taking some pictures of the ground I went and stood on the terrace on the far side to watch the game. Lincoln were impressive and it was a great start for Danny Cowley’s management of the Imps as you can see from the Non League Paper’s match report below.

After the game we made our way home. Before leaving we stopped in Grantham as I wanted to pop into a cider bar to see if I could get some to take home. There was one called Weston’s Rocket Fuel that I’d not tried, but sadly they were not licensed to do take out and at 8.4% there was no way I was having it and then driving home. The journey home was decent, with just a small diversion off the A1 at Sawtry. Usually the diversions are a poor route, badly signposted and a right pain to use. For once though, it was well signed and only added 5 minutes onto the journey. I dropped Anwar off at 11.40, getting home myself at midnight. 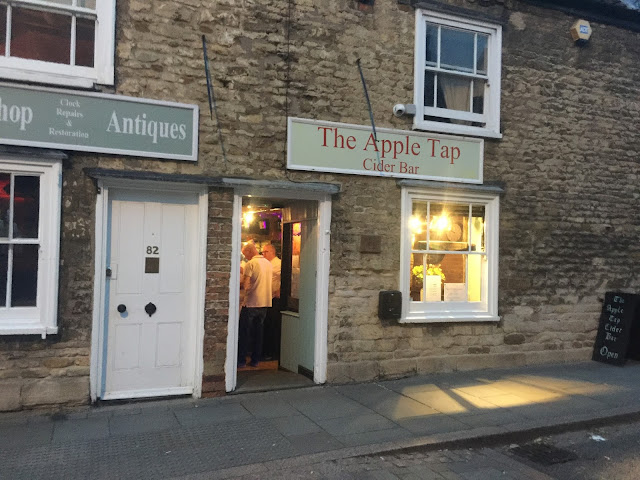 THE SOUTH KESTEVEN SPORTS STADIUM is one of the biggest grounds in the Southern League with a capacity of 7,500. Located just over a mile from the town centre the bar and food facilities at the ground are good, with a decent choice and regular special offers in the bar. There is also a small table selling club souvenirs and an outside food van. Other than that there is a chip shop on the way to the town should you not have so much time. Parking at the ground is plentiful and free. 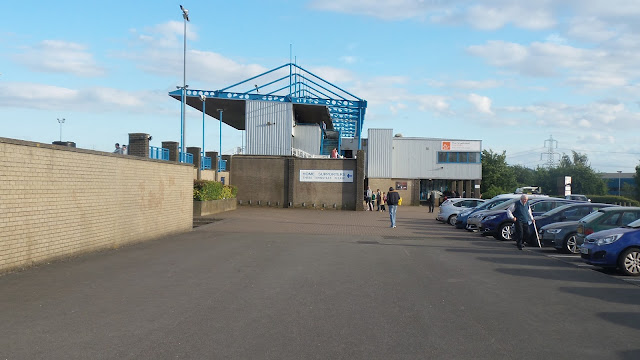 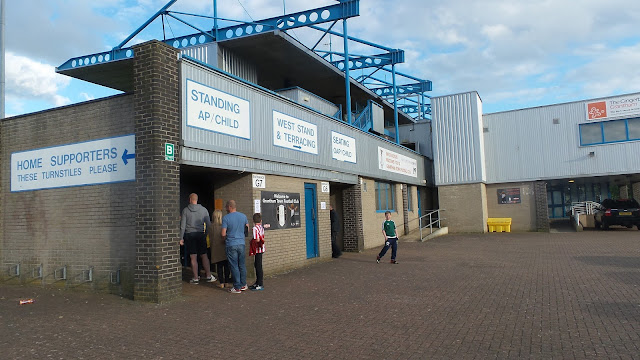 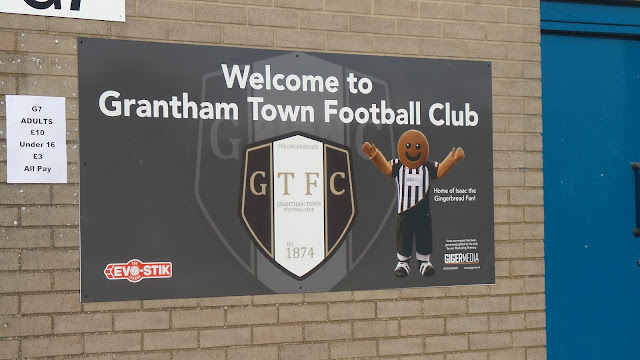 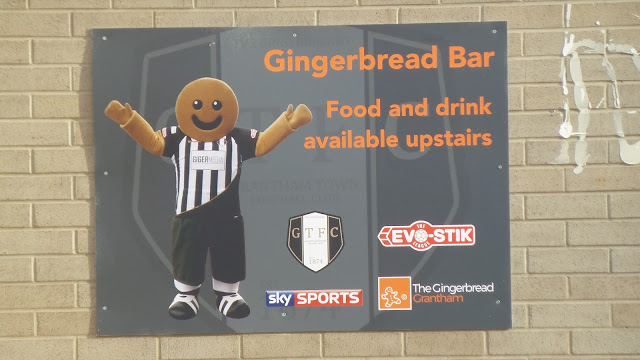 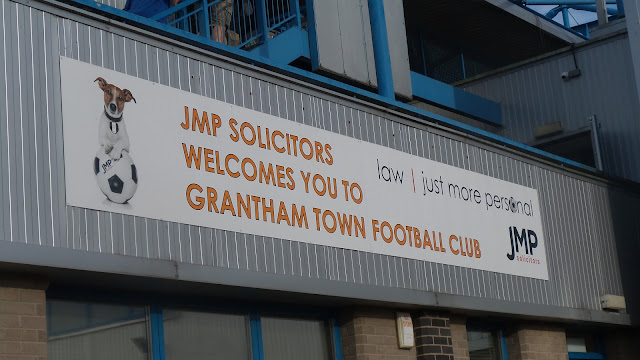 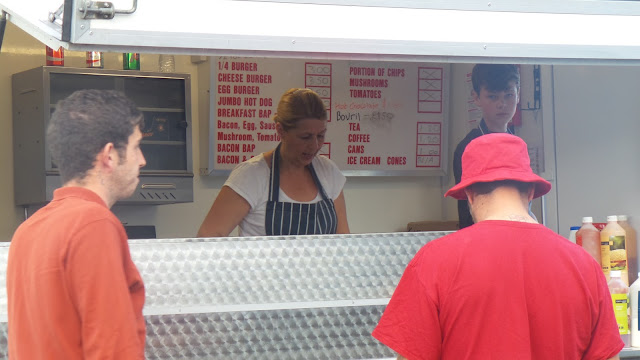 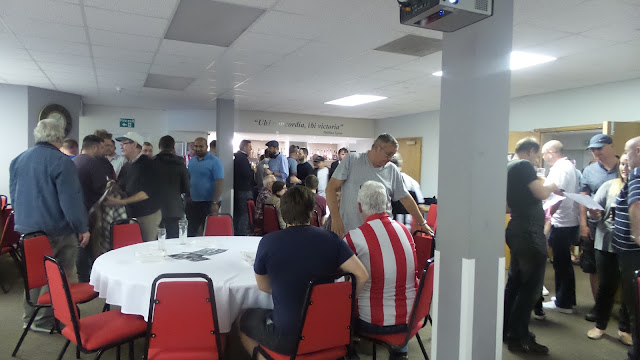 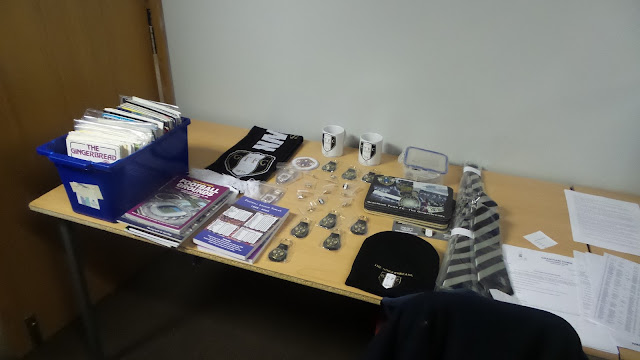 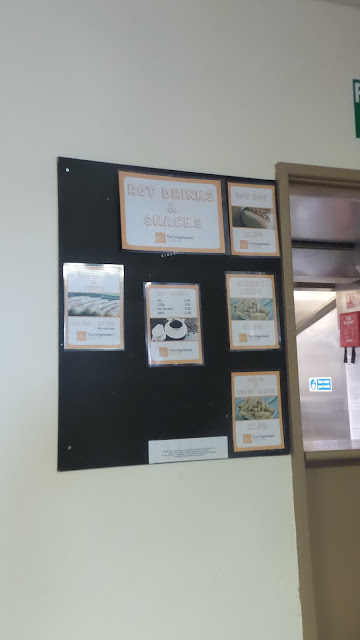 As for the stadium itself, I wasn’t looking forward to it as much as I should, due to the running track around the ground. It’s a fair distance to the pitch thanks to additional space between the stands and the track, but thanks to the steep pitch of the stands the view from them is not bad. There is seated accommodation for 750, with most of it under cover and elevated, so views are good. On the other side there is a covered terrace for around 1500. The rest of the ground is made up of a few large banks of uncovered terracing and a few steps around the rest of the ground, though the view from behind the goals is a bit distant. 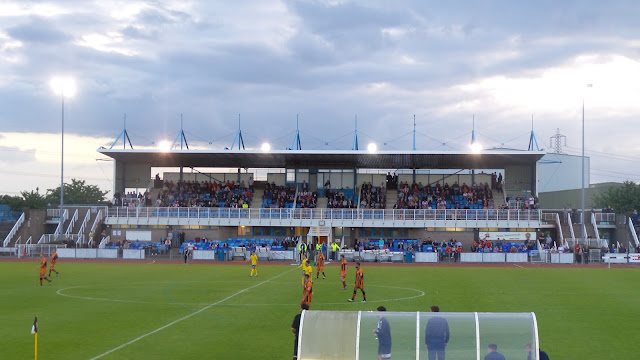 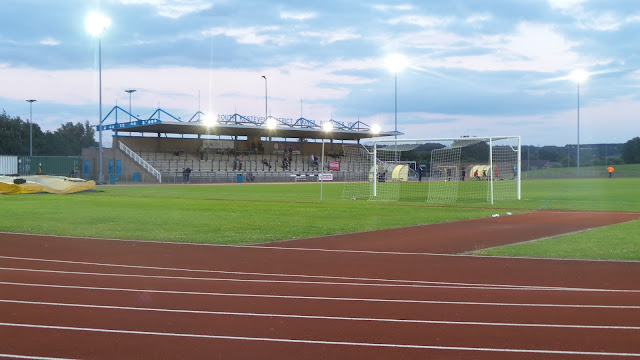 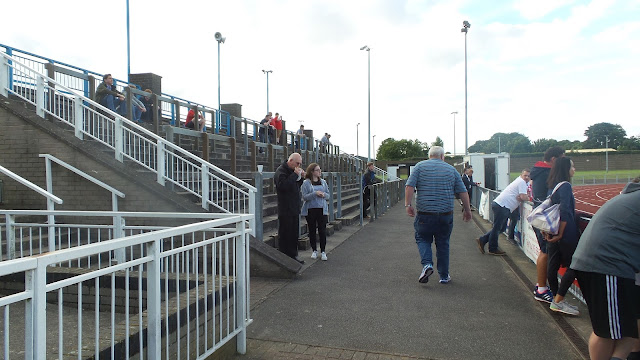 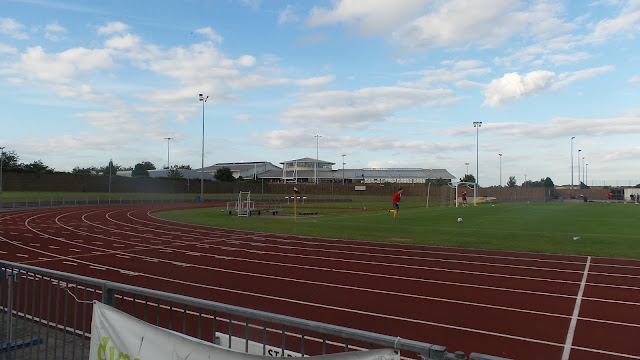 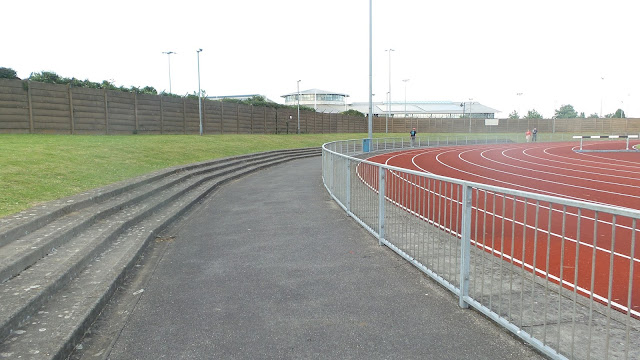 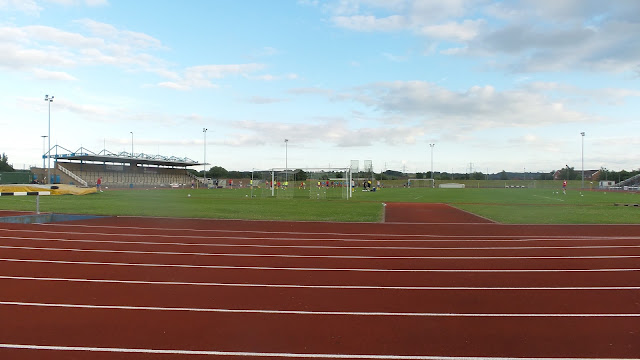 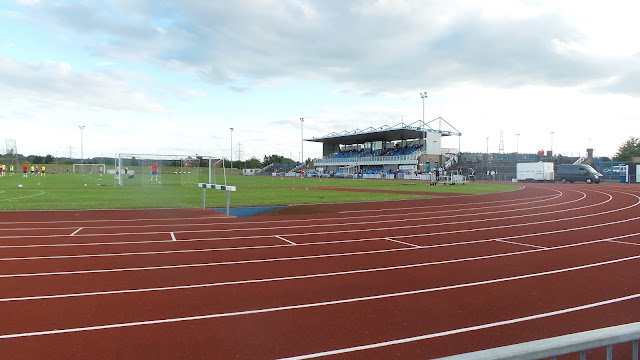 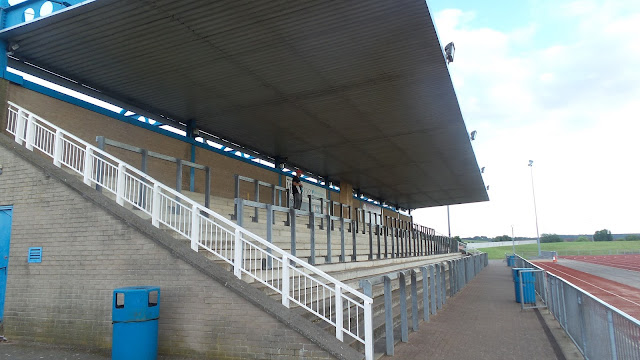 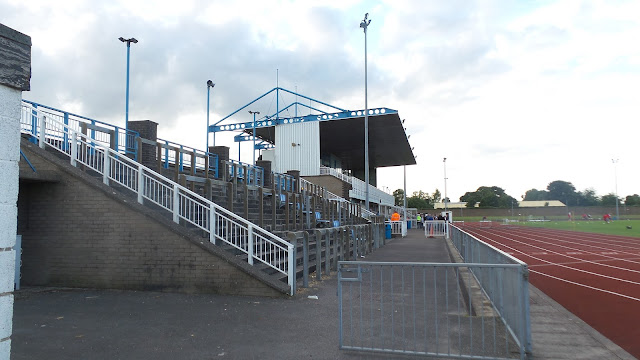 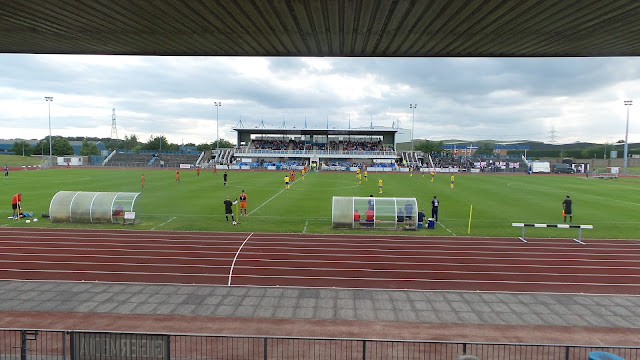