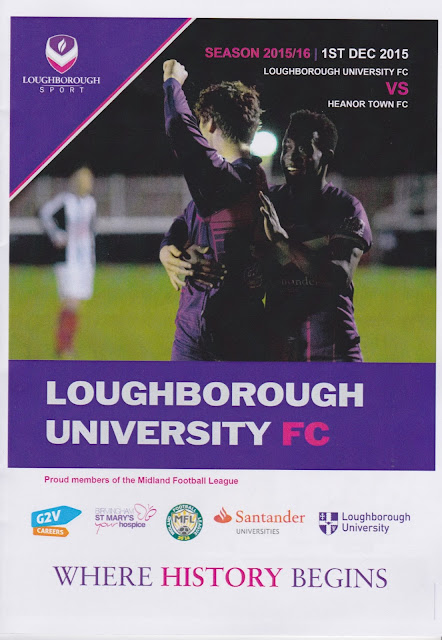 LOUGHBOROUGH UNIVERSITY FC was formed in 1920, initially under the name of Loughborough College. They would go on to have future Arsenal keeper Bob Wilson and Wimbledon's FA Cup here Lawrie Sanchez in their sides, whilst Hartlepool United winger Ebby Nelson-Addy is a current example of a player formerly on their books. The club hasn't actually played senior football for much of their history, preferring to remain amateur. They were in the Leicestershire Senior League in the late 60s and early 70's before joining the Midland Combination in 2007. After finishing 4th in their first season, they were champions in 2009 and joined the Midland Alliance. In 2014 the Alliance and Combination merged to become the Midland Football League and the University side finished in 20th place in their first season. They were faring a lot better this term, sitting in 13th but 2nd placed Heanor Town would be a tough test.

The students best ever progression in the FA Cup 1st Qualifying Round, which they reached in 2011 and 2013 losing to Quorn and Mickleover Sports on each occasion. In the FA Vase, the 2nd Round was reached in 2013 where they lost to Graham Street Prims. In 2011 they won the Midland Alliance League Cup after beating Boldmere St Michaels 3-2 at Walsall's Bescot Stadium. 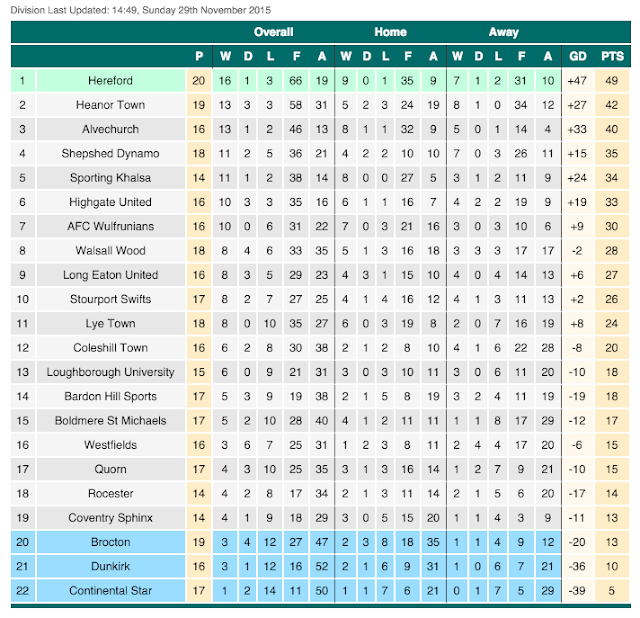 After doing my last 3 groundhops without Anwar, I was glad to have him back in the passenger seat for tonight's game. While I'd tried to keep the distance and costs down for those 3 games it had still put a dent in my budget and it would be good to have some company on the journey as well. There were plenty of choices for games to go, and with the weather forecast looking reasonable it looked as if there wouldn't be any issues with waterlogged or frozen pitches. Initially, I was leaning towards Highgate United v Nuneaton Griff in an FA Vase Replay as I'd attempted to go to last week before the referee's dislike of the pitch had diverted me to Boldmere St Michaels. In the end, though, I saw that Loughborough University v Heanor Town was free admission. I'd been wanting to go to Heanor for ages, mainly for the town and the ground but the team were also doing well and would be a good one to watch. I'd be joined by fellow hoppers Laurence, Chris & Jack who had also seen the tweet I'd retweeted, but they'd be making their own way up. It was the usual routine of a hard day at work on Monday, which is pretty much always the busiest day of the week for me. Thankfully I get a day off on Tuesday and so Monday night is the one time I get a decent nights sleep. If I’m lucky I will get 6 hours, though after going to a Tuesday night game I’m lucky if I get half of that. So it was good to get over 11 hours shut-eye. Normally I’d walk down Wycombe in the morning, but seeing as I had lots to do and my Dad wasn’t going anyway I didn’t bother in the end. I spent the day at home catching up, before leaving at 3 as I wanted to pop into Aylesbury before meeting Anwar at 4. 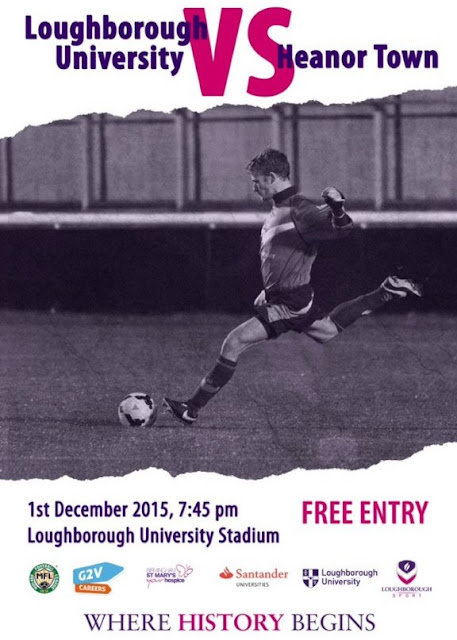 It was actually a decent journey up for once with the M1 on much better form than usual so it was only the roundabouts of Milton Keynes that delayed us. We got to Loughborough around 6 and parked in the town centre. I put the local Wetherspoons in my phone intending to have dinner there but in the end I found a place called Dominic's which did Pizza, chips and a drink for £4, a more sensible option as I was driving. It was great for the price and suitably full up we made our way to the ground. Getting there was easier said than done. First, my sat nav took me to a tennis complex which must have been the old ground. After that, I had to use Google Maps on my phone as my car Sat Nav didn't recognise the postcode. It ended up taking us down a dirt track to a farm and a dog seemed very keen to chase us off. Soon enough we were at the complex where the ground is but even then it was still a job to find where to go. We found it in the end, getting there just after 7. I headed straight for the bar to get a programme which was also free. I found a new cider - Somersby Cranberry which was very refreshing and nice and light at only 4%. I met up with fellow hoppers Laurence, Chris, Eddie and Jack and we had a natter while we waited for the game to start. I learned that the reason for the free entry was due to the original fixture being abandoned due to floodlight failure. 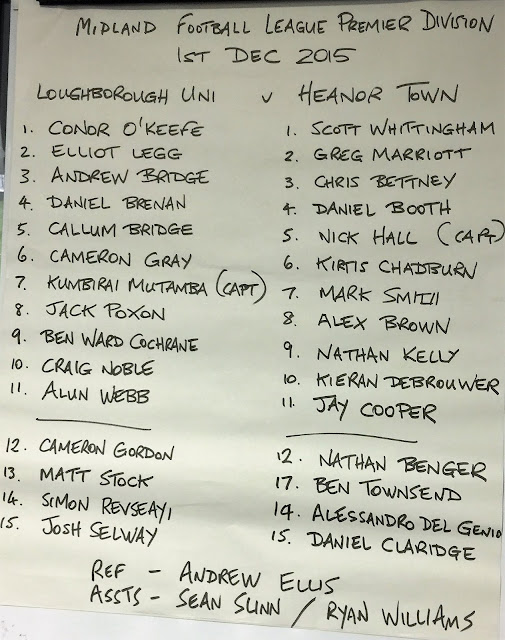 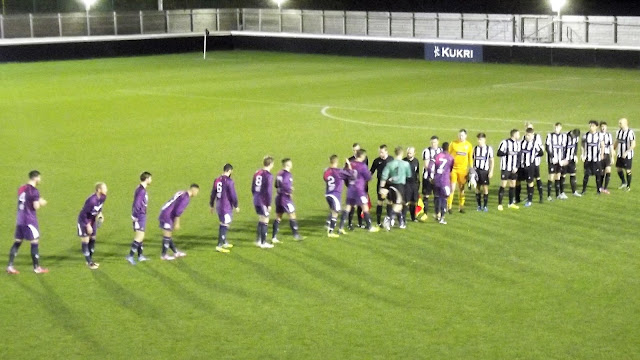 There were numerous chances for both sides before Heanor opened the scoring on 38 minutes. A good cross was put in from the right and Kieran Debrouwer slid in at the far post. Just before halftime, Alun Webb equalised with a measured finish into the bottom right-hand corner. Loughborough were probably the better side in the second half and they got their reward on 81 minutes when Alun Webb got his second with a low shot into the bottom left-hand corner and from tonight's showing he looks a really smart finisher. Deep into injury time Heanor got their equaliser when Alessandro Del Genio bundled over the line following some poor defending. A tad harsh on the hosts at the referee blew his full-time whistle moments later. During the second half, I was most disappointed to hear that Wycombe were 3-0 down to Bristol Rovers and was glad that I'd not made the trek down there. I'd only recently been just over a month ago and that sort of repetition was why I got into hopping. The city might be great but the ground isn't and when there is not 3 points and a good performance to go with it, it gets depressing. After the game, I said my goodbyes and made my way back to the car. The journey home was decent enough with minimal delays. I dropped Anwar off at 11.20, getting home myself 20 minutes later. I stayed up for around an hour, reading about Wycombe's poor performance, the adventures of other hoppers and watched some Youtube videos before going to sleep.

LOUGHBOROUGH UNIVERSITY STADIUM is a bit out in the sticks with little nearby so it's a good job the bar facilities are good, though there is no real ale. Food is limited to pies as far as I could see and they also have badges. As for the stadium itself, it's great and not far off Conference standard. There are 7 steps of open terracing all the way around, plus a large elevated stand holding around 300. Everyone there is really friendly making it well worth a visit. 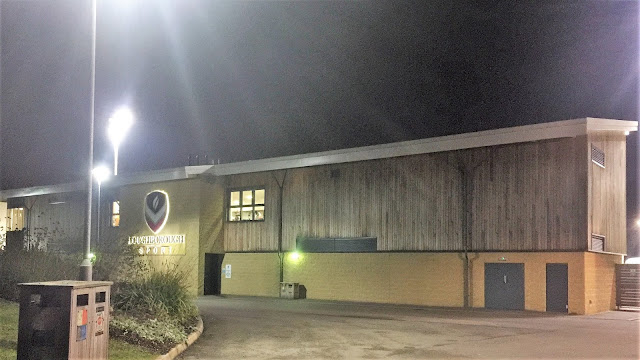 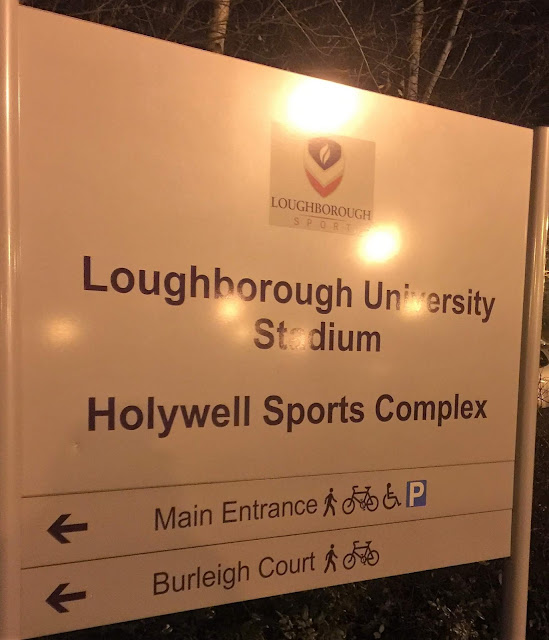 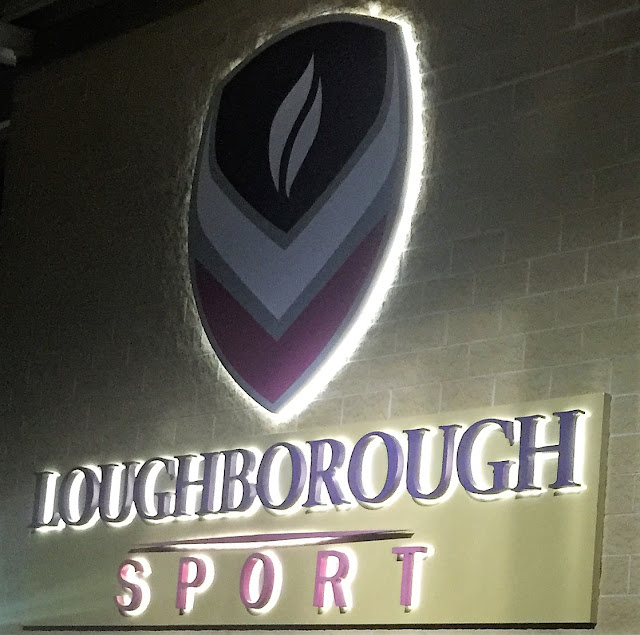 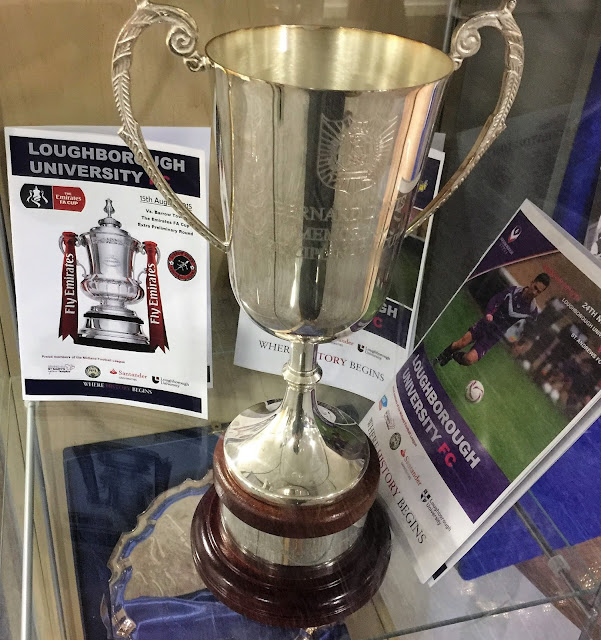 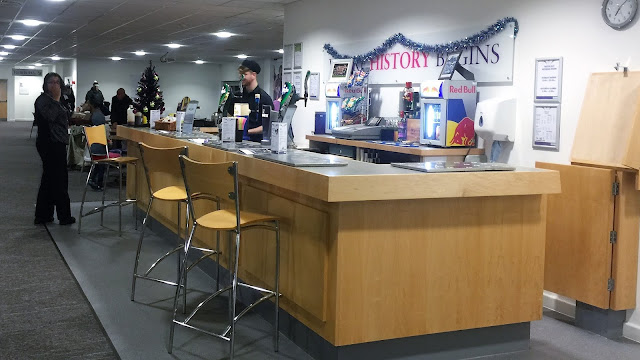 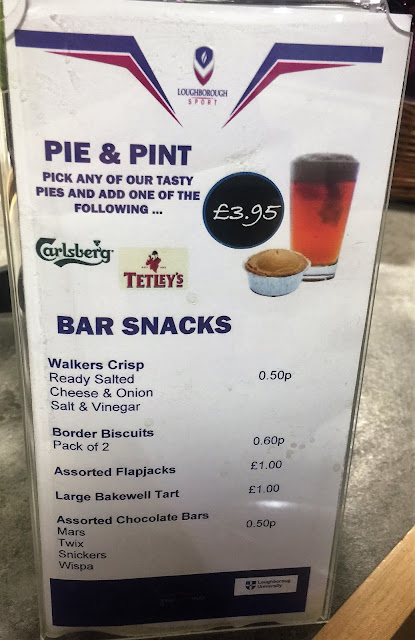 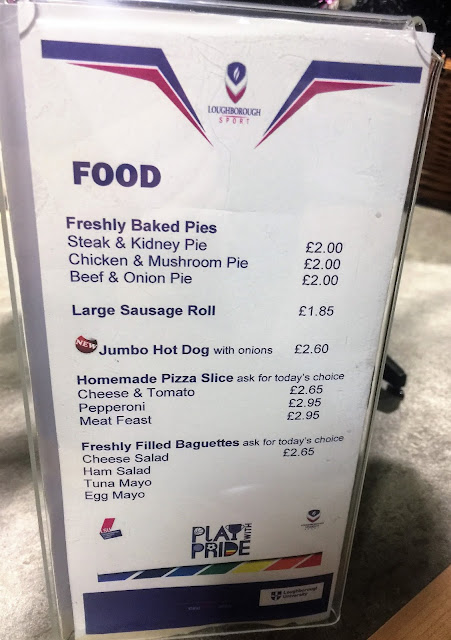 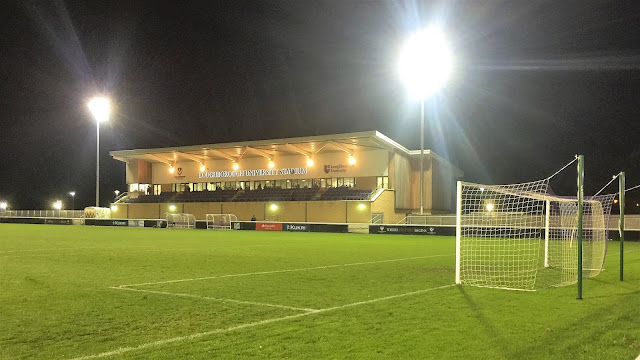 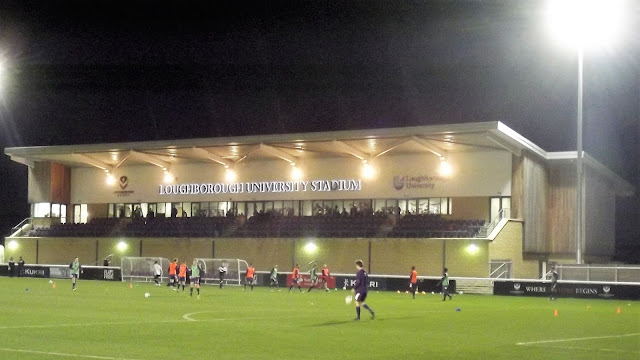 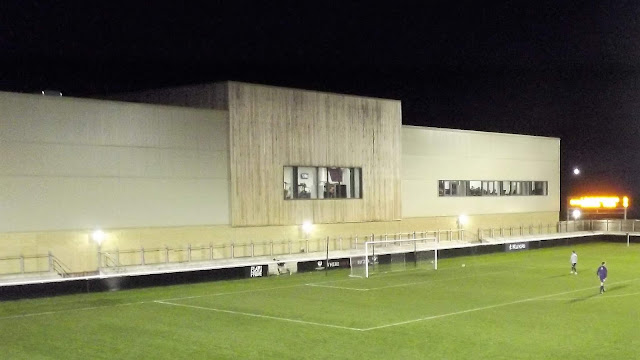 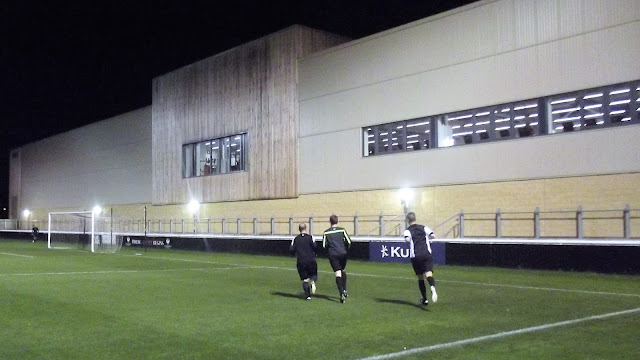 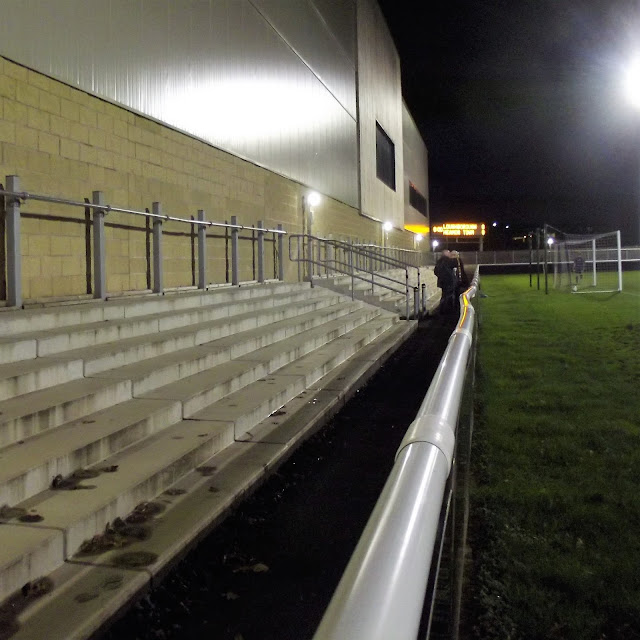 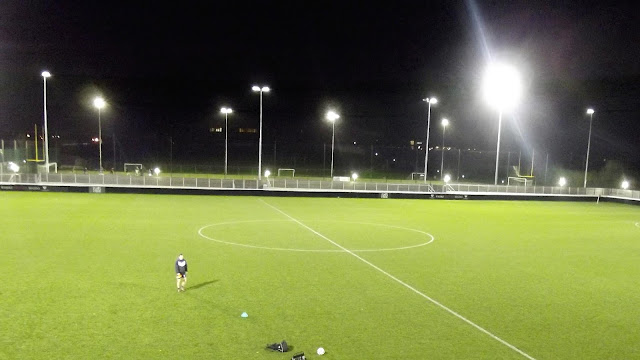 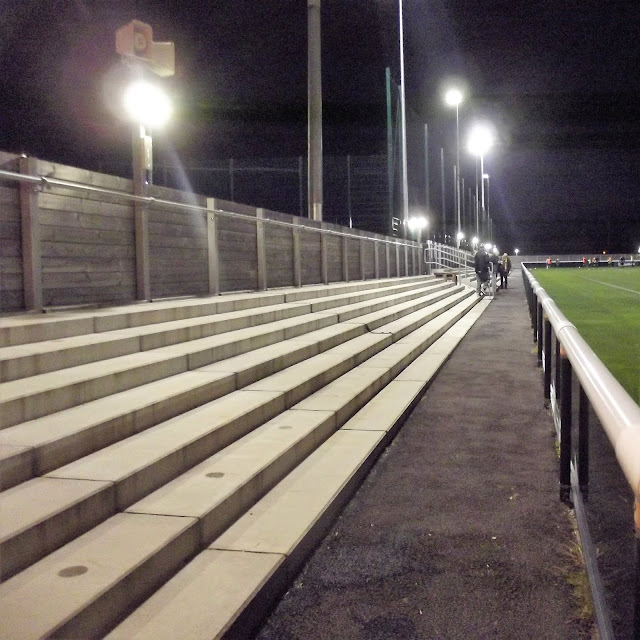 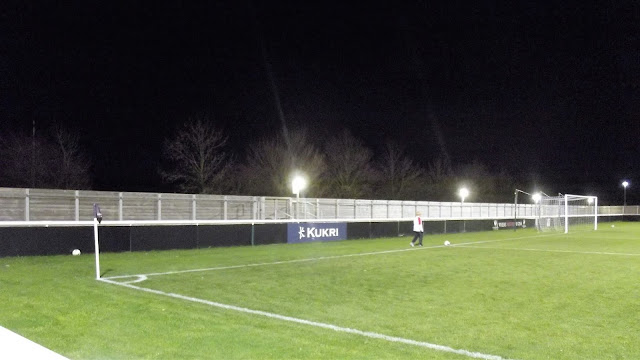 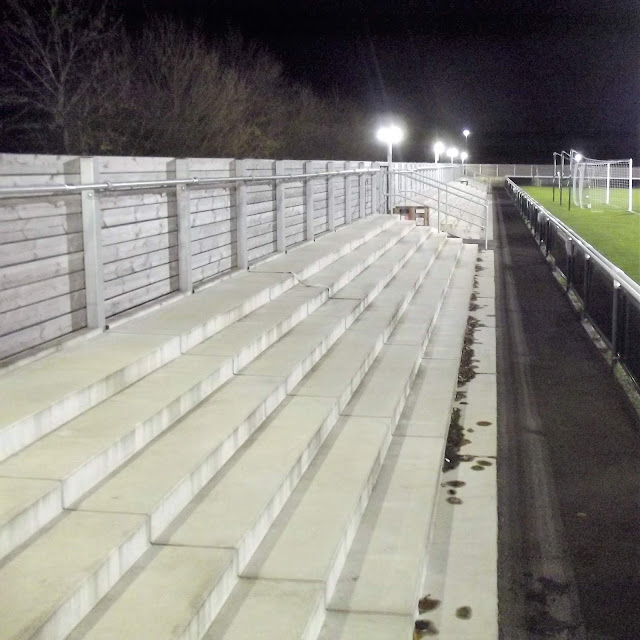