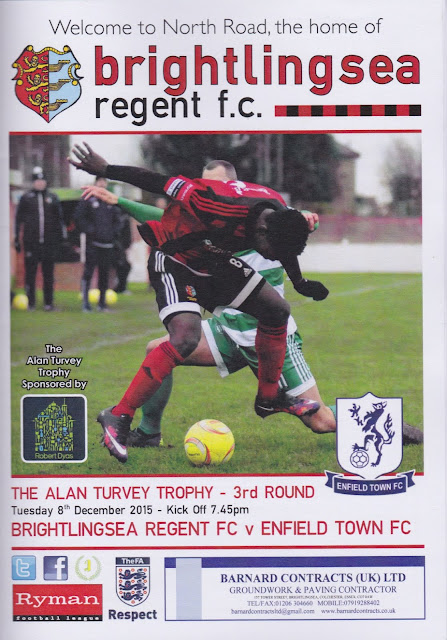 BRIGHTLINGSEA REGENT FC was formed in 2005 following the merger of Brightlingsea United and Regent Park Rangers. United had enjoyed their main period’s of success from 1972 to 2002 when they were in Essex Senior and Eastern Counties leagues, though come the time of the merger in 2005 they were in the lower Essex & Suffolk Border Leagues. The meter galvanised the club and they worked their way up through the ESBL’s leagues after starting in Division 2. In 2011 they joined the Eastern Counties League at Division 1 (step 6) level and in their second season won promotion after finishing in 3rd place behind Cambridge University Press and Newmarket Town. The 2012-13 season saw a runners-up spot behind Haleigh United and that was enough to earn them a spot in the Isthmian D1 North as the champions did not wish to apply for promotion. Last season saw the club fall just one place and 2 points short of an attempt at a 3rd consecutive promotion as they finished just outside the playoffs in 6th place. This season had seen a slight drop in form with them sitting in 12th, but they were at least one of the form teams at the time of tonight’s game - along with second-placed Thurrock they had gained 16 points out of the last 18 available.

Little success had been had in the FA Cup, with the best progression they had been able to muster was the 1st Qualifying Round which they reached in 2014 before losing to Spartan South Midlands side London Tigers, though too be fair they have only had 3 seasons in the competition. They FA Trophy has been just as barren, though the 2013-14 season did see a great run in the FA Vase. Starting out in the 1st Qualifying Round they beat Felixstowe & Walton United, Stanway Rovers, Team Bury, Takeley, Colney Heath & Bodmin Town to set up a 5th Round game with Dunston UTS. Then 2012 winners won 5-0 but it had been a very good run nonetheless. In 2012/13 the club won the Eastern Counties League Division One Knockout Cup, beating Great Yarmouth Town 1-0 in the final. The town of Brightlingsea itself was featured in the national newspapers in 1995 over ‘The Battle Of Brightlingsea’ as the town’s ports were used to export animals to Europe for slaughter in conditions which many believed to be inhumane. There were protests aplenty over a 9 month period with nearly 600 people arrested, but in the end, they got their way as the exports ceased. 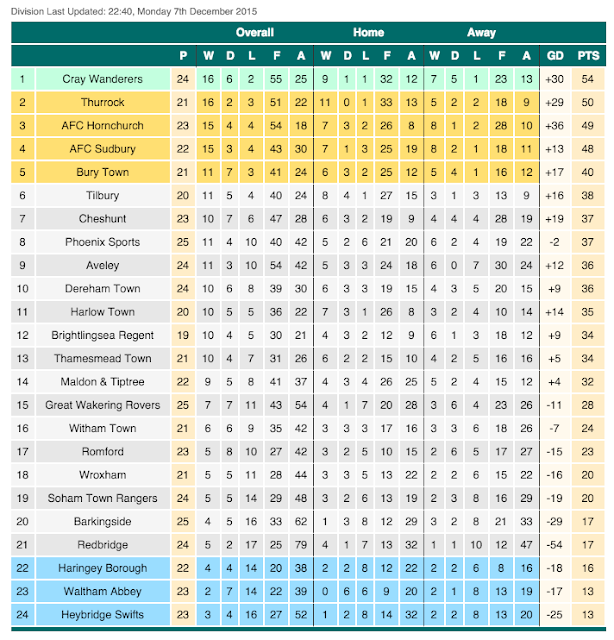 For what could possibly be myself & Anwar's final groundhop together before Christmas, we had 56 options. Until the day we were completely undecided as to where to go as the weather was not looking the best. I'd made a shortlist of around 5, that included options as diverse as Poole Town and Ollerton Town. The options were spread all over the country, so whatever one we chose it would have plenty of backups in the result of a  late postponement. It was a busy day at work on Sunday again thanks to staff 'sickness' and Monday was, as usual, the busiest day of the week. But once 3pm had come I could enjoy my time off, with the best night of TV of the week and the FA Cup draw too. There was only one team that I was looking out for and I was pleased when Wycombe pulled out Aston Villa at home. Hopefully, one that will get moved for TV to give the club some much-needed cash, and one where a positive result is not beyond the realms of possibility. I'd had a good night's sleep on the Monday as per usual and I did my usual walk down town the next day. It was during that hour or so stroll that myself and Anwar decided that it would be Brightlingsea Regent v Enfield Town for the night's hop. I got a nice welcoming tweet from the club when I mentioned it on Twitter and hoped that it would be a good tie in the Isthmian League Cup, with the potential of penalties if it was a draw. After having lunch I watched TV and looked around on the internet for a bit in case of any pitch inspections. There were none but I was late leaving anyway by just over 5 minutes. I had to stop at the petrol station too, which added even more time on, but even so I was only 5 minutes later for Anwar, getting into Aylesbury at 4.05.

We left straight away and without traffic we should have been hitting Brightlingsea just before 6, leaving enough time for a pre match meal. The roads out of Aylesbury were their usual slow self, but once we got on the A41 we knocked off the miles like nobodies business. The M25 was OK, well for about a mile anyway, then we hit serious delays. The junction at Waltham Abbey had witnessed some scumbag shooting an innocent person nearby, but the police had decided to keep the junction closed, even 8 hours after the incident had happened. This caused major jams and misery for everyone, and to my knowledge, this continued to the following day, at least the closure anyway. This added over an hour to our journey, and even though it was fairly clear, we still didn't get there until around 7.10. After getting an excellent programme from the gate for the great price of £1 we made our way into town to get dinner. After navigating to a Chinese takeaway on Google Maps only to find it closed we had to look for other options. A takeaway called 'Star Kebab' fitted the bill, and with it being a proper Turkish place I decided to push the boat out and get an Adana Kebab for £6.40. When I'd been to Turkey on holiday the kebabs had been fantastic, proper meat served up neatly on a plate with a nice sauce. This was exactly the same, albeit in a foil tray and I'd say without a doubt it was the best one I have had in England. Anwar got his doner meat and chips but as we were tight for time we decided to walk back to the ground before eating it, arriving at 7.40. Handily there were some picnic tables with a view of the pitch to eat our meals from. 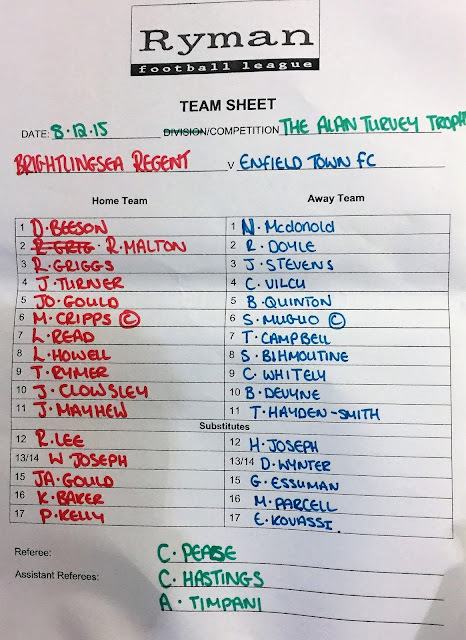 The first half started off with the home side starting brightly but soon enough Enfield Town took control. They'd already had a number of chances before they took the lead on 14 minutes, courtesy of a low shot from just inside the area by Joe Stevens. The goal of the evening put the visitors further ahead on 35 minutes when Tyler Campbell fired into the top right-hand corner. Brightlingsea had a goal ruled out for offside shortly after but with Enfield looking comfortable at the break and 2-0 up it looked as if the game was all but over. However, Brightlingsea made a real fist of it in the second half and they pulled a goal back on 51 minutes through Matt Cripps. Try as they might, they couldn't get the equalising goal though, despite piling on the pressure and forcing the Enfield keeper Nathan McDonald into several good saves. After the game, we listened to the 'most of them aren't Champions League' coverage on 5 Live on the way home. Normally I'd be disappointed that an English team were out but in the case of the consistently tedious Manchester United, I will make an exception. It was ironic that their most entertaining match, a 3-2 defeat against Wolfsburg was their death knell, and for a couple of minutes of the game, they were through thanks to them being level and PSV going behind. The other half of Manchester turned a 2-1 defeat into a 4-2 victory in the space of 4 minutes to see them finish top of their group. Because of listening to this and much better roads the journey home went quickly with me dropping Anwar off at 11.20, getting home myself at 11.45. I was still wide awake and didn't get to sleep until 1.40, making me very tired when I got up for work at 4 the next morning. 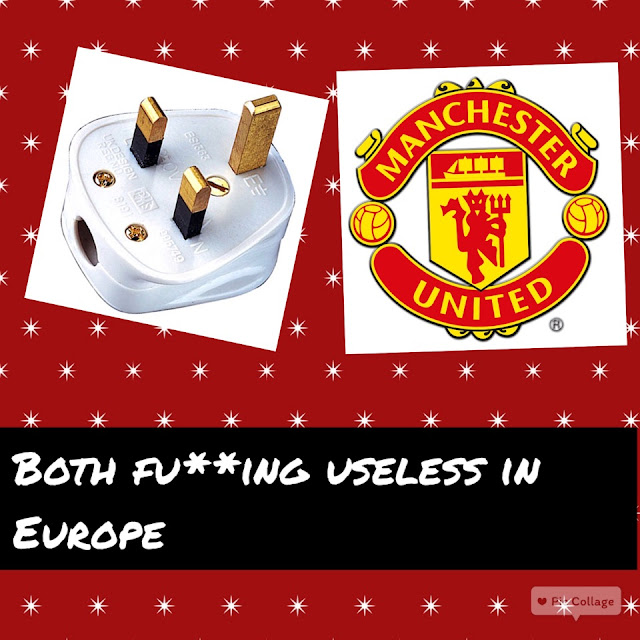 NORTH ROAD is a ground that has seen improvements made as the club has moved up the pyramid. There are a few random areas of flat covered accommodation that appear to be original and these hold around 250 at a push. There was already a standard metal stand holding 50 for step 5 football decked out in red and black seats, the club colours. That was fine for step 5 football but the club hit the headlines a couple of seasons ago when they bought a 107 capacity stand off of eBay for £5,500. Shipped from the Isle Of Wight, it had only been used once before for a tennis tournament and since acquiring it the club has added a roof and have named it 'The Danny Gee Stand' in honour of Daniel Girling who sadly died in a car crash on the M25 in February 2003.

The tea bar at the ground is pretty basic, offering burgers and bacon rolls. The bar has a reasonable range of drinks and has big screen TV showing live sport from various matches. The town is probably a decent bet - I'd heard good things about the Railway Tavern which is in the CAMRA Good Pub guide and is supposed to offer real cider, sadly due to time constraints I couldn't visit. One place I did go is the Star Fast Food takeaway and that was excellent, plus they help out by advertising in the programme. Overall this friendly club is well worth a visit and I had a good time there. 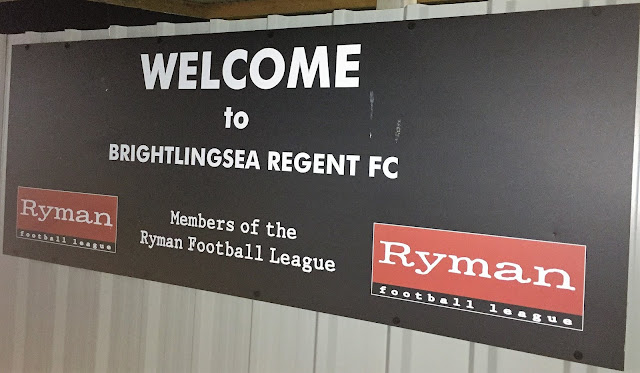 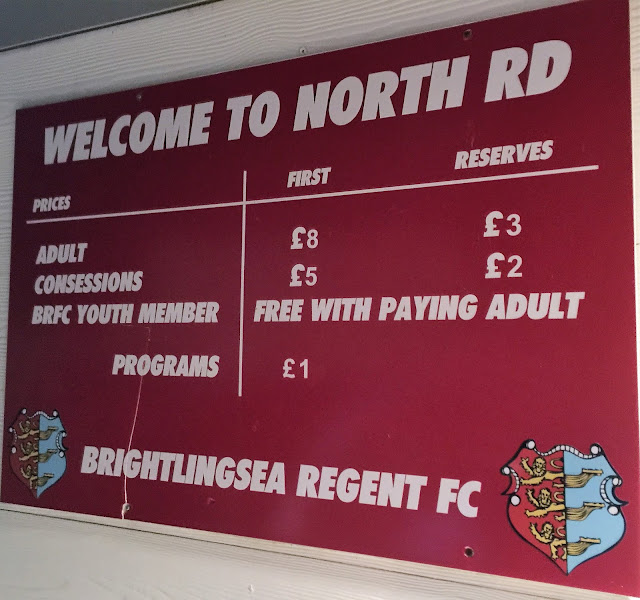 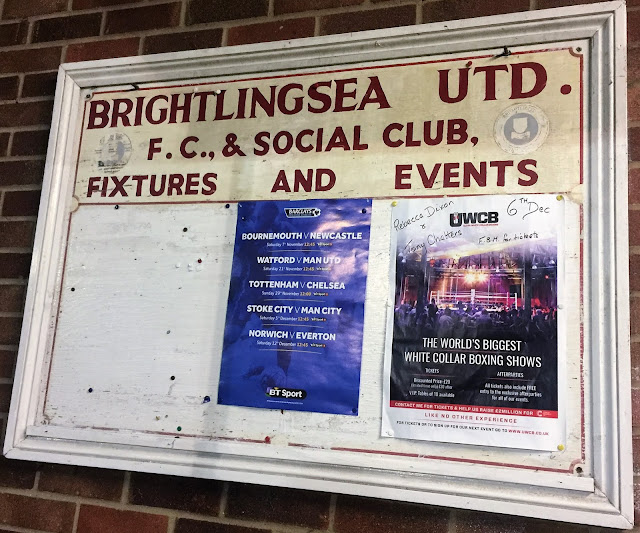 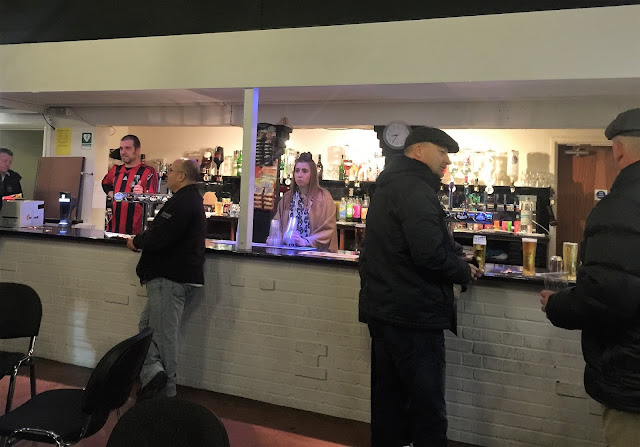 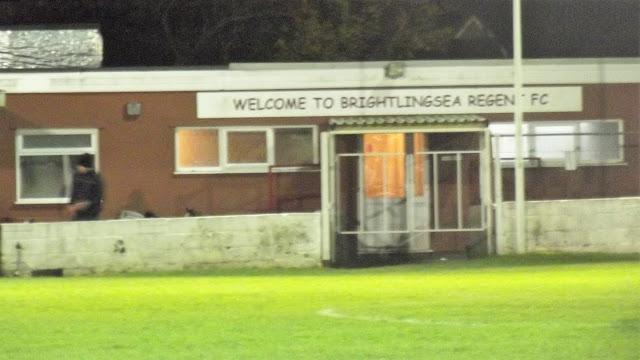 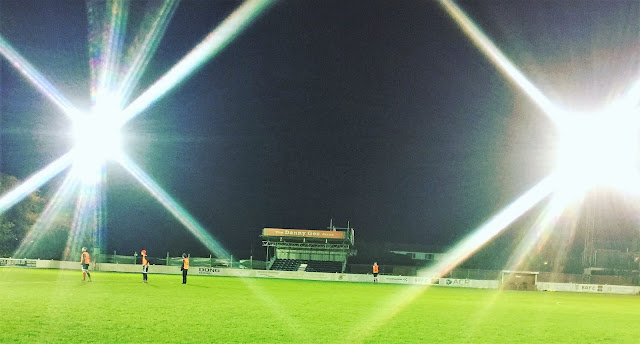 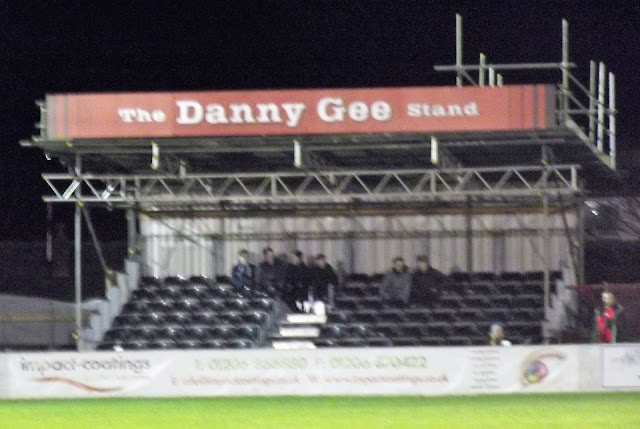 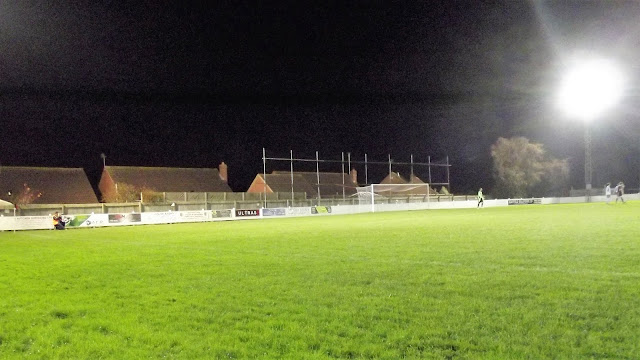 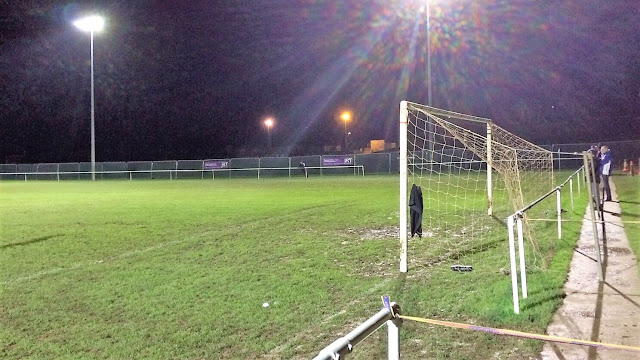 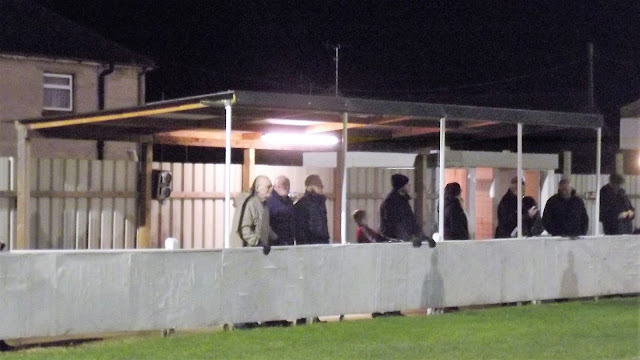 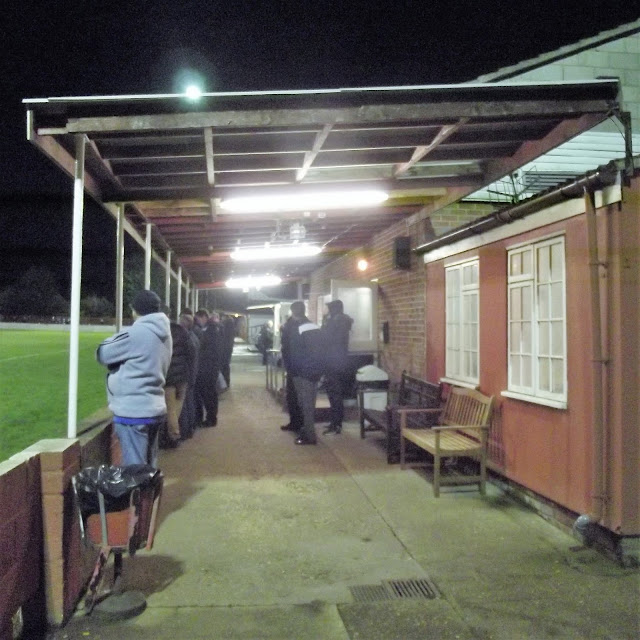 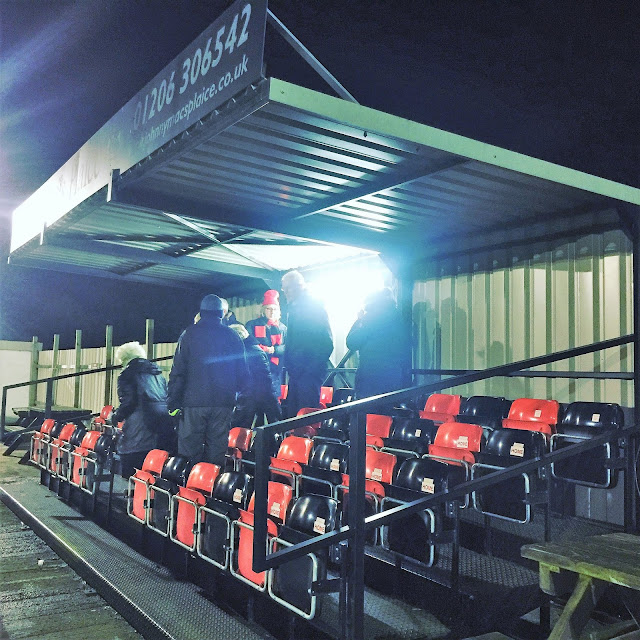 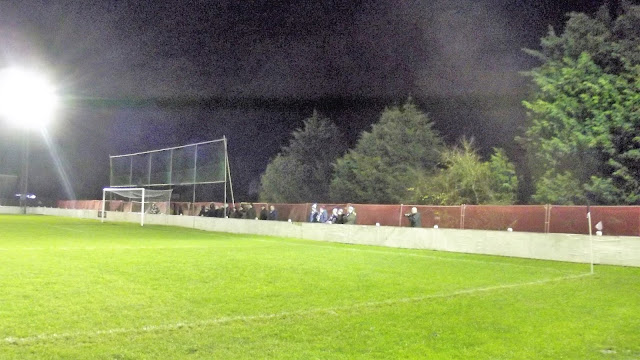