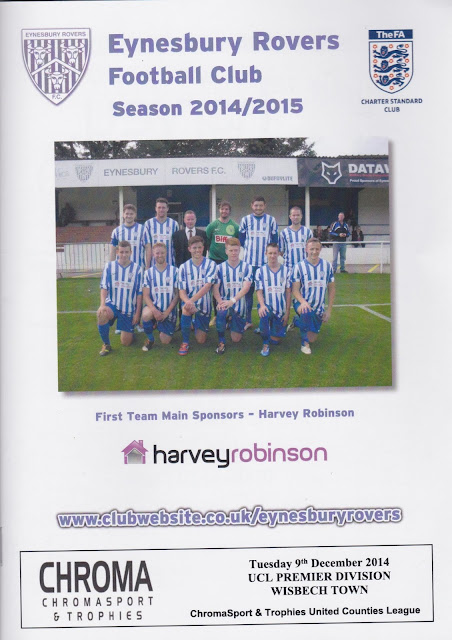 EYNESBURY ROVERS FC was founded in 1897 and started out in local leagues. They have been almost ever-present members of the United Counties League since 1946, apart from an 11-year spell in the Eastern Counties League in the 1950s and early 60s. They have generally struggled in the UCL Premier but did have a best-ever finish of 3rd in 1991. At the start of the game, they were in lower mid-table, not bad considering that they had only just been promoted after a long spell in Division 1 last season.

In the FA Cup, they have not played in it for a long spell before last season, where they lost in the Extra Preliminary Round to Spalding United. Previously they reached the 4th Qualifying Round in 1954 where they lost 3-1 to Cambridge United. Their best progress in the FA Vase came in 1994 when they reached the 3rd Round. They had a record attendance on 5000 in 1955 when they played Fulham in a friendly and Stanley Matthews starred for the home side. 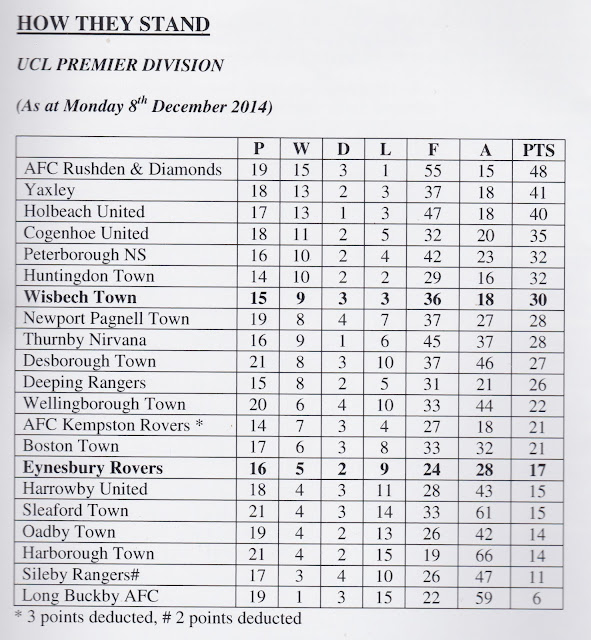 This week I was looking to do a groundhop that was fairly local and cheap, the main reason being that I had to be in work the following morning even earlier than usual. With me starting at 4am it meant that I was up at the crazy time of 3am, and so would get even less sleep than I usually did after a night at the football. Several options were considered, but myself and Anwar eventually settled on Broxbourne Borough v Amersham Town, which was just about the nearest one that we still both had to do. The weather looked fine, with only light rain pre kick off. We would be sure to keep an eye on the situation with it being freezing, but with no home club Twitter, that was easier said than done. In between this and my last groundhop at Long Eaton United on Saturday, Wycombe had played an FA Cup game. That was at home to AFC Wimbledon on Sunday and we were clear favourites with the bookies to win it. But on the day the team didn't turn up and we were very poor indeed, with us losing 1-0 in an awful game. I was gutted as the FA Cup is one of my favourite things in football, my 12 games attended this season in that competition proving this. With my last team to visit, Warrington Town, also going out, I will now cool my interest until next August. The consequences this to the club were felt on Monday as the Dons drew Liverpool at home, which would have bought the club much needed cash and raised local interest in the club. It's important to look at the bigger picture though, our form in the league has been brilliant, and much unexpected after last seasons struggle, resulting in the club being a much happier place, though the support has not gone up which is frustrating.

On the day of the game I had quite a lot to do down town. I was hoping to get my car washed, but the people that usually did it were not working, probably due to the freezing weather. I did get my hair cut though and got a few other bits, but due to waiting nearly an hour for a haircut, I didn't have time to carry on with my Christmas shopping. I came home and had lunch, during which my Dad told me about a bad accident on the M25. It happened at 2am, with a lorry having a crash and killing some poor soul. As a result, the road was closed for the foreseeable future, meaning getting to Broxbourne would be tricky. As a consequence, alternative plans were made, and we were off to Eynesbury Rovers v Wisbech Town instead. The knock on effect was that time was very tight with me having a dentist appointment in the afternoon, and having to leave at 4.15 to be sure of beating the traffic, meaning that it was too early to eat at home to save money. I'd also have to fill up with petrol as well as I was getting low on fuel, and with it being around 2p cheaper in Aylesbury than in Eynesbury, I decided to do it before we went. In the end, I stopped for diesel on the way to Anwar's and after filling up, still got there at the meeting time of 4.45. Anwar was there waiting for me and with no traffic, we got to Eynesbury at 6.15. I killed time by getting some dinner and doing a bit of Christmas shopping in Tesco but we still got to the ground with an hour to go before kick off. I eat my chicken in my car and checked Facebook before going in at 7pm. I was very pleased to see that entry was only £5 and included a programme. As I had some good pictures of the ground from stopping on the way to Kings Lynn last season I went in the bar before kick off. I wouldn't normally drink on a short midweek trip but they had been really friendly and entry was well priced, so I got a pint of Strongbow for £3.10. I drank this in the warm, going outside with 10 minutes to go before kick off. I got myself a £1 portion of chips to keep me warm for the first half. 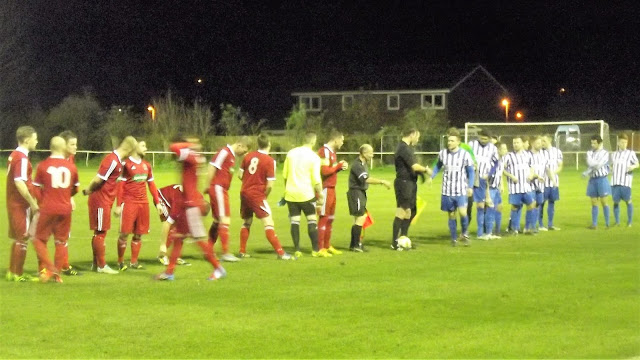 Wisbech took the lead a few minutes in with a tidy finish by Danny Beaumont after a good through ball from Matt Lunn. They were 2-0 up soon after with aToomy Treacher that looked well offside but caught the keeper out of position. And it was 3-0 to the visitors on 40 minutes when a parried shot was followed up by Beaumont for his brace. It had been quite a one-sided half and the Eynesbury players were none too pleased with each other's performances. During the break, I went and sat in my car whilst listening to the radio and put my bag back in the boot.  Eynesbury Rovers improved a bit in the second half, having lots of possession but never really threatening the visitors' goal. Finally, with around 5 minutes to go, the home side got on the scoresheet as substitute James Freshwater coolly converted a penalty, slotting it in the bottom right-hand corner. Wisbech added a 4th in the dying minutes through Jacob Smith as Eynesbury attacked more and that is how it stayed. After the game we made a quick getaway, listening to TalkSPORT on the way home and hearing that Liverpool had gone out at the group stage of the Champions League. I dropped Anwar off at 10.35 and after following a frustratingly slow driver most of the way home and unable to overtake, I got in at 11, going to bed an hour later.

ALBERT HALL MEMORIAL FIELD is one of the better grounds at step 5 level. The biggest stand stretches most of one side of the pitch and holds around 500 in a mixture of seating and standing. There is a smaller covered standing area on the other side holding around 100, while the rest of the ground is open. The tea bar and bar are fairly good and with not a lot else near the ground might be your only options. With it being an inexpensive night out and a friendly club, it is well worth a visit. 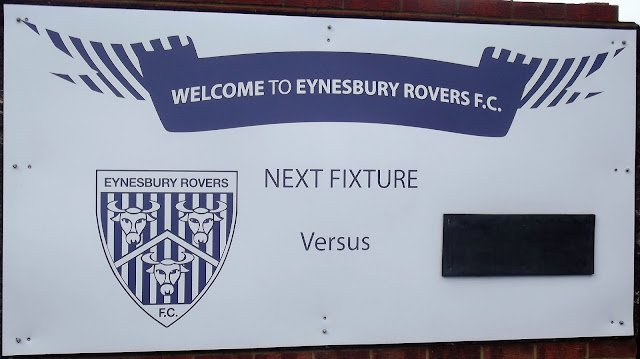 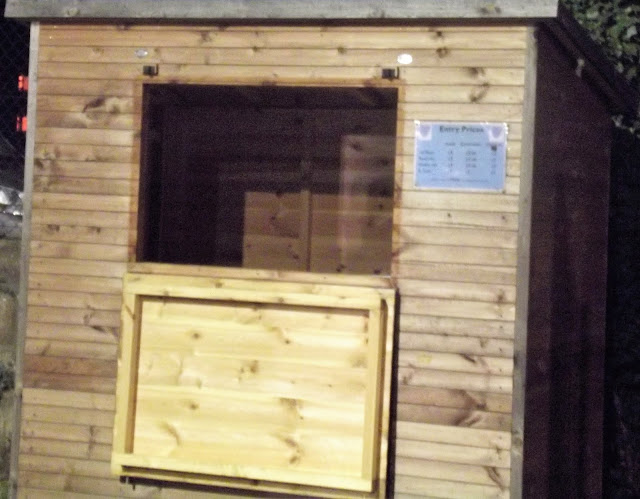 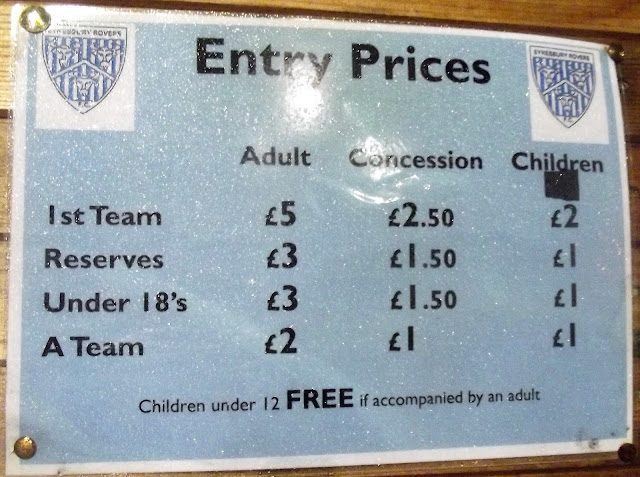 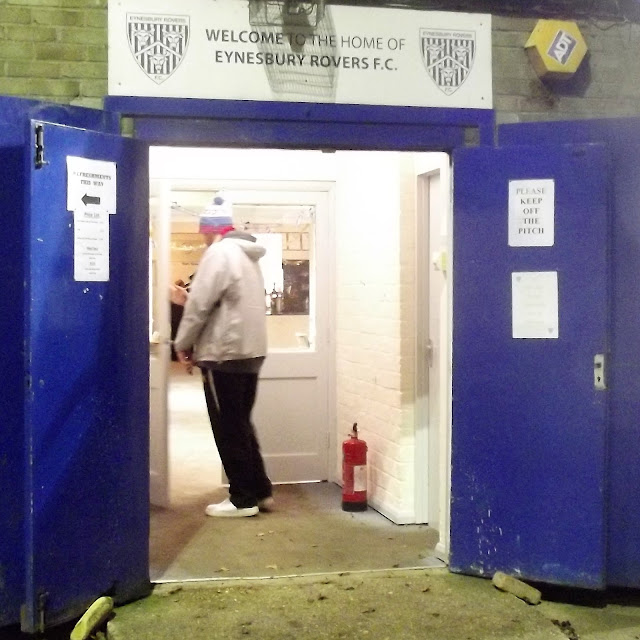 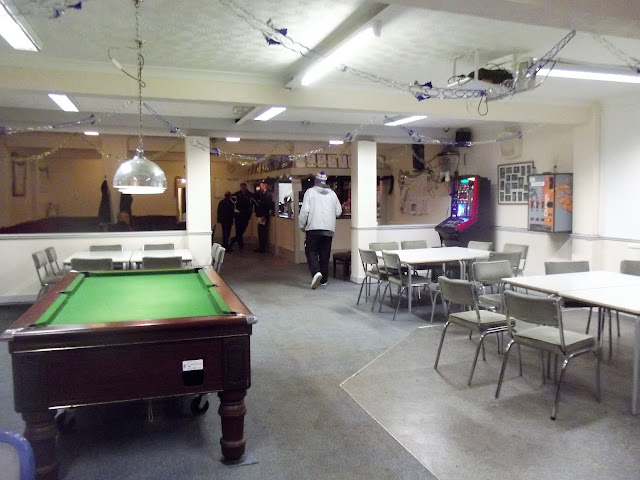 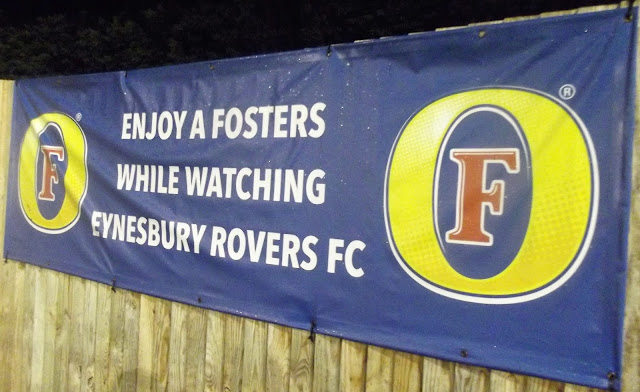 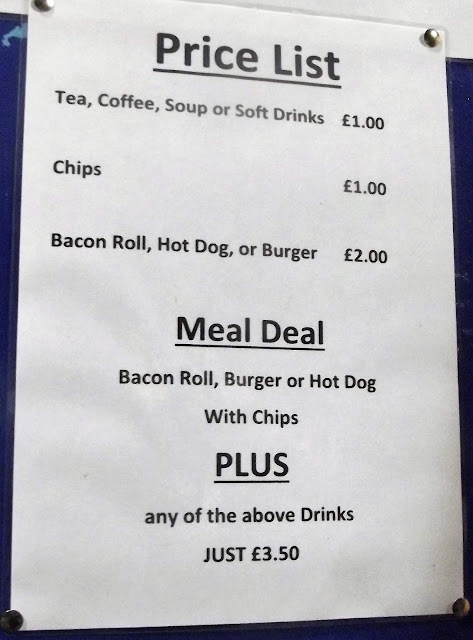 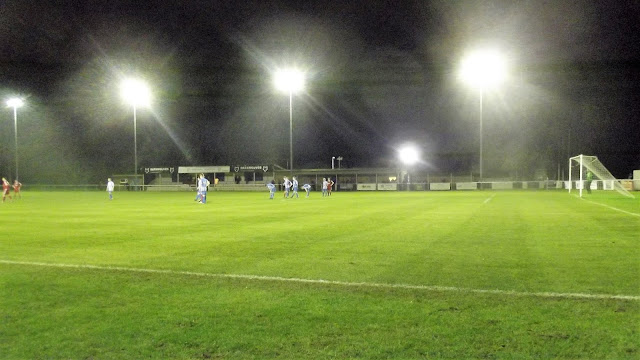 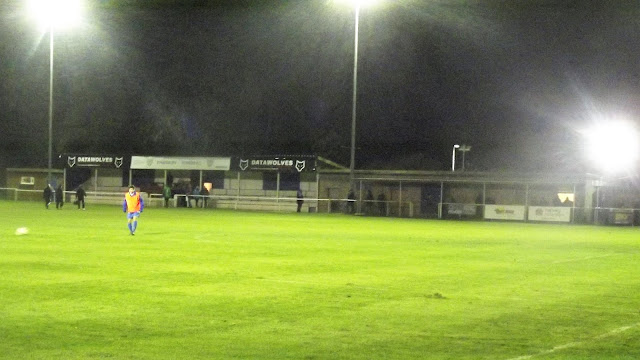 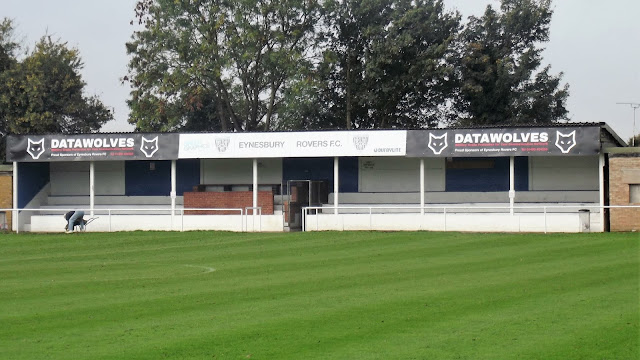 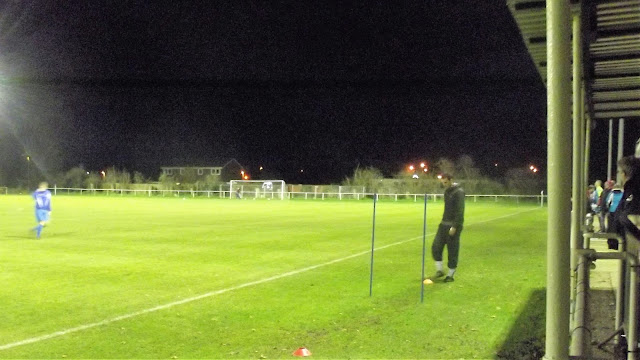 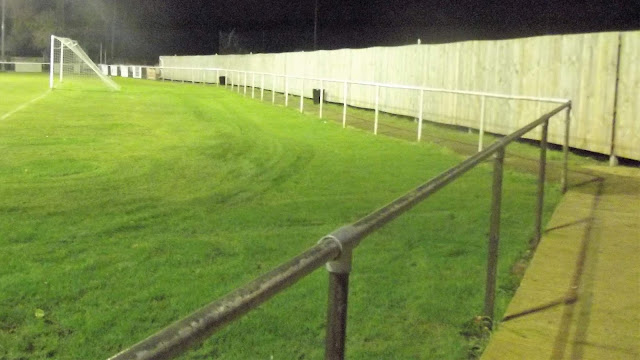 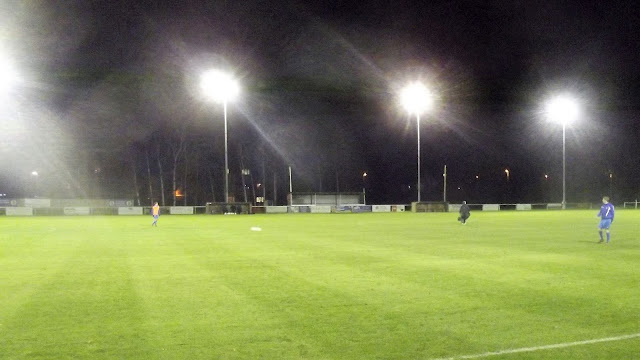 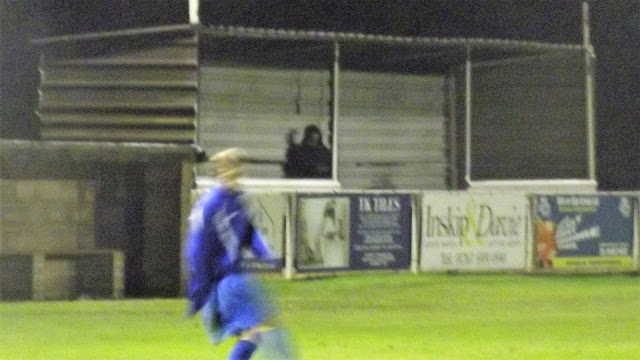 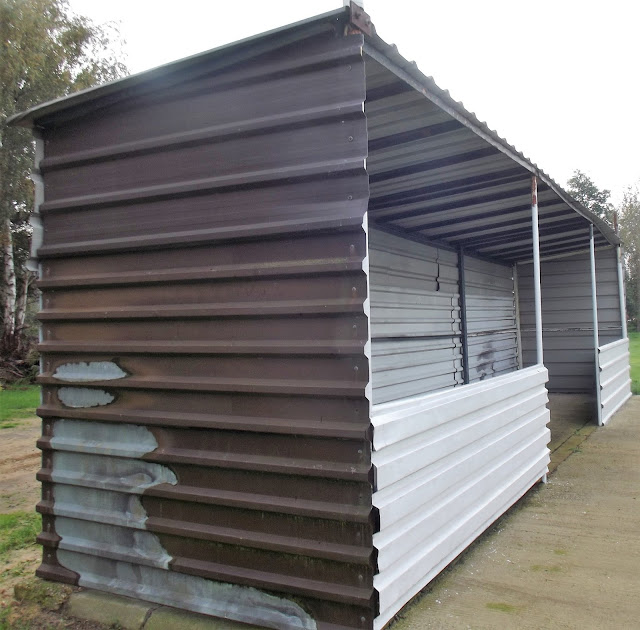