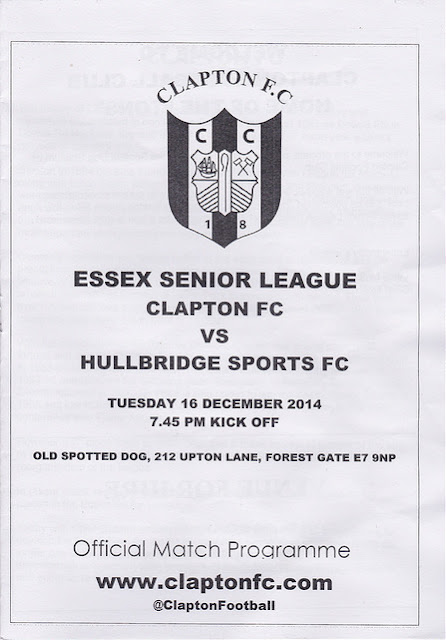 CLAPTON FC is a team who I first heard about due to their excellent ground name - The Old Spotted Dog. I once visited there when on a day in London. I didn't manage to get into the ground, but looking over the fence, the old place looked a bit sorry for itself, with piles of rubble and old mattresses scattered around the place. The ground had once held a 12,000 attendance against Spurs in the FA Cup back in the late 1800s and was used as an anti-aircraft station during World War 2.

The club was founded in 1878 as Downs FC, changing a year later to their present name. They were the first British club to play in Europe in 1890 when they defeated a Belgian XI 8-1 before beating Antwerp 7-0 the following year. They were founder members of the Southern League and in the first half of the 1900s were hugely successful in the Isthmian League. Since that time, however, the club has struggled, apart from the odd season where they finished in the top half of the table, even winning the Isthmian Division 2 in 1983. Following the introduction of the Conference North & South, they joined the Essex Senior League in 2006. They had their best ever finish of 10th in this league last season and were improving, even more, this season, sitting 5th at the start of play.

They had not made much progress in the FA Cup in recent years but did reach the 3rd Round in 1926 before losing to Swindon Town. Likewise, they won the FA Amateur Cup on 5 occasions, but have had little success in its replacements the FA Trophy and FA Vase. They have won a number of local cups though, most recently the Essex Thameside Trophy in 1984. 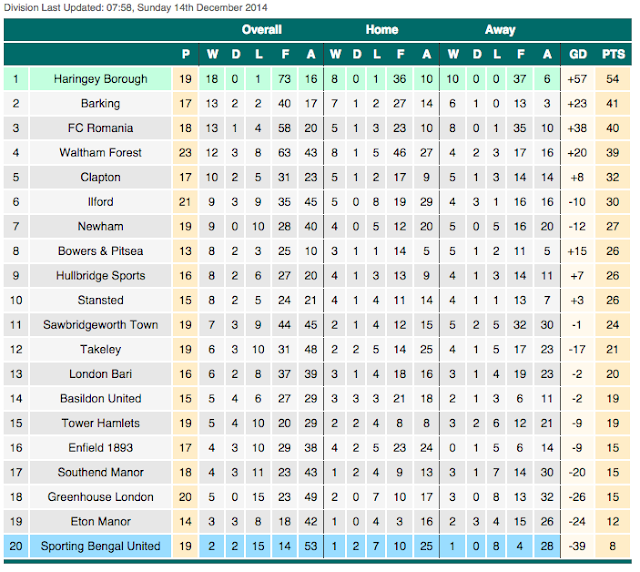 As it was getting nearer to Christmas, the midweek games were drying up, but I still had a fairly healthy selection to choose from. I would have to travel a fair way though, and after listing the fixtures that were do-able, I had a chat with Anwar and we decided that Clapton v Hullbridge Sports would be our first choice. It would mean a potentially miserable trip around the M25, but it would mean the chance to see the Clapton Ultras - a set of fans well known for their chanting and colourful presence at their team's games. I'd be keeping an eye on Twitter, however, the pitch was a regular for postponed games, just like Brentwood, another Essex club who I had tried to visit before, but had been thwarted due to the weather. The day of the game was my day off as per usual for a Tuesday, but I was still quite busy. I had my research to do for my blog, finding out a lot about Clapton in the process. Later on that morning, I went to our local shop to post Christmas cards and get some Diet Irn Bru. After having my lunch  I also had to go down town to pick up my prize of a packet of penguins that I won in last night's drive time competition on our local radio station. It might not match up to my previous prize of a home entertainment system that I won on Virgin (now called Absolute) Radio around 10 years ago, but they would do for tonight's match and I also had to get some bubble wrap to send a temperamental TV that I had sold on eBay in the morning, this was one that I picked up on the way to a groundhop at Burgess Hill Town last month. 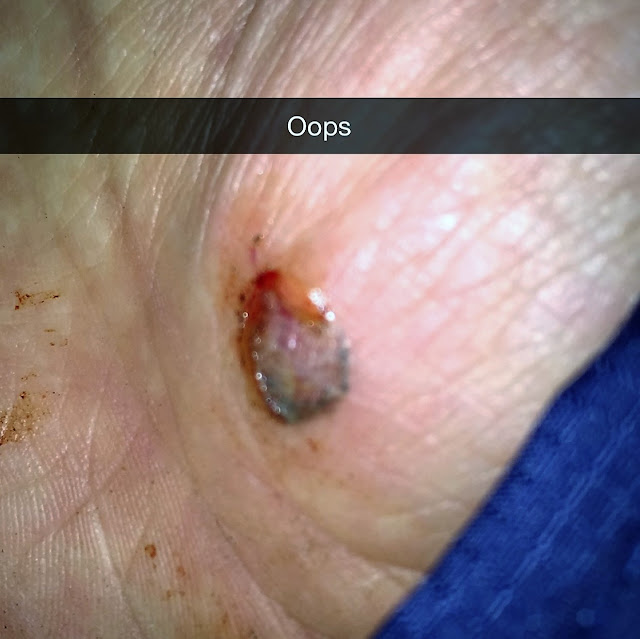 I had already arranged its replacement, which conveniently I had to pick up a few miles away from Anwar on my way to picking him up for tonight's game. I left home at 3.20, dropping the old TV at my local Parcelshop, I picked up the TV as arranged from a very nice woman at 4, before meeting Anwar 25 minutes later. We were soon on our way and we made good time for once, with just a couple of bits of heavy traffic. We got to Clapton at 6 and parked in a local side street. We went to a place called Spice Hut where I fancied a curry but they weren't ready. Nor were the Shish kebabs so I settled on a chicken wrap which was delicious and good value with chips and a drink at 3.50. I then went to search out the local Wetherspoons, The Hudson Bay. I found it and ordered a mulled cider, but after 10 minutes of waiting for it to arrive I gave up and walked out. On the way back to the ground we stopped for a pizza seen as it was only a quid for a 7 inch and that was great for the price. Then on the way back to the car to get my stuff I fell arse over tit when I tripped over a kerb and went flying. I grazed my hand and arm but just thought 'sod it' and got up and carried on. After picking up my stuff I went to the ground. 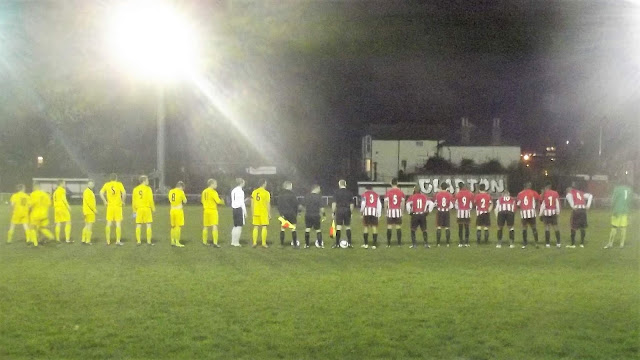 When we arrived the gate was unattended with money and a pile of programmes on display. When the bloke did come, we were charged £6 for entry which is fair enough but it was £1.50 for the programme which when it was 2 sheets of photocopied A4 was a bit of a mickey take. I still got one but Anwar didn't bother. I took some pictures and washed the cut on my hand before the game and stood on the halfway line for the game. The Clapton Ultras were in great voice supporting their team but it was a cagey opening with few chances. What few chances there were fell to Hullbridge though and they ended up taking the lead on the half-hour mark after some scrappy defending. Clapton improved and got their equaliser right on half-time when they took advantage of a slip in the Hullbridge defence. At halftime, there was a peaceful protest by the Clapton Ultras to show solidarity with Jimmy Mubenga who died on a plane during an attempted deportation. He was held down by G4S security staff and suffered a fatal heart attack. This fits in with the Ultras' strong anti-fascist beliefs and although I don't know enough about the case to comment fully, it's certainly a sad situation that a man has lost his life in such a manner. The second half saw the game tip in Clapton's favour and they began to take the tie to the visitors. They hit the woodwork and came close on more than one occasion, but Hullbridge did have some chances of their own. It looked as if it was going to end all square but Clapton popped up with a late winner, which happily I caught on video from behind the goal as I was walking around. There was quite a lot of added on time and as Hullbridge tried for an equaliser, tempers flared and there was a bit of handbags between the players, but nothing serious enough to warrant the referee taking action.


It had been a good night at the football, thanks mainly to the Scaffold Brigada, the nickname for the Clapton Ultras. They were noisy throughout and had some great songs and it reminded me of AFC Wimbledon back in their Combined Counties League days. As for the standard of football, the Essex Senior League looked below par for step 5, a trend which I have noticed from watching games in various leagues. Perhaps it suffers from the lack of a step 6 league directly below it because, with no relegation, the competition level gets a bit stale. I had a decent journey home, that was at least until the junction of the M25 that we needed to get off at was closed, meaning we had to take an 8-mile detour which meant I dropped Anwar off in Aylesbury 10 minutes later than I planned. I got home myself at 11.30 and after looking at Facebook and watching some Youtube videos on my iPad, I went to sleep around an hour later, only getting a couple of hours sleep as I was up at 3am for work. 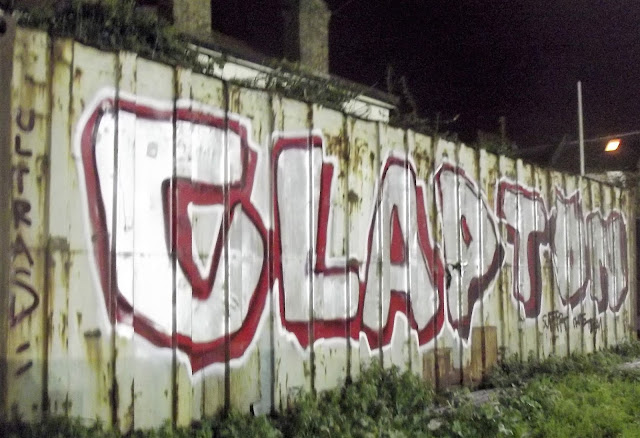 THE OLD SPOTTED DOG is a traditional non-league ground, which is a bit smaller than I expected. It's also in a state of disrepair with overgrown grass, though it does have a ramshackle charm with Ultras stickers everywhere and club graffiti on a wall. The smartest stand is on the near side, a fairly modern covered seating area holding 100 whilst on the opposite is the 'scaffolding' stand where the ultras reside. Apart from a few steps of open terracing the rest of the ground is undeveloped.

The clubhouse looked pretty empty and forlorn, this was due to the fans protesting against the person who owns the club, believing that he falsely claims to own Clapton FC. Perhaps that was the reason they didn't bother opening the tea bar. In both cases, there are plenty of great value takeaways near the ground, plus a Wetherspoons. There is also a Costcutter store opposite, which sells chilled cans an there were several fans drinking on the terraces during the game. 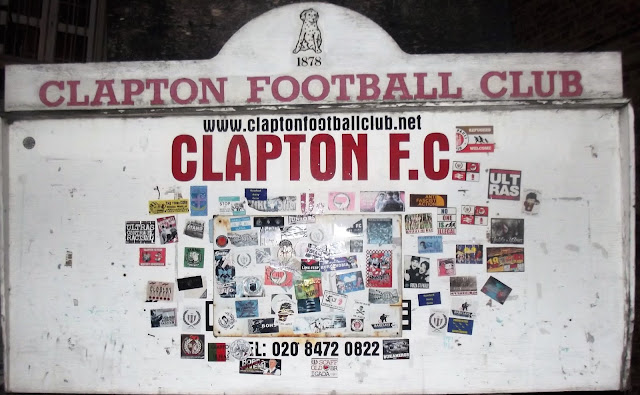 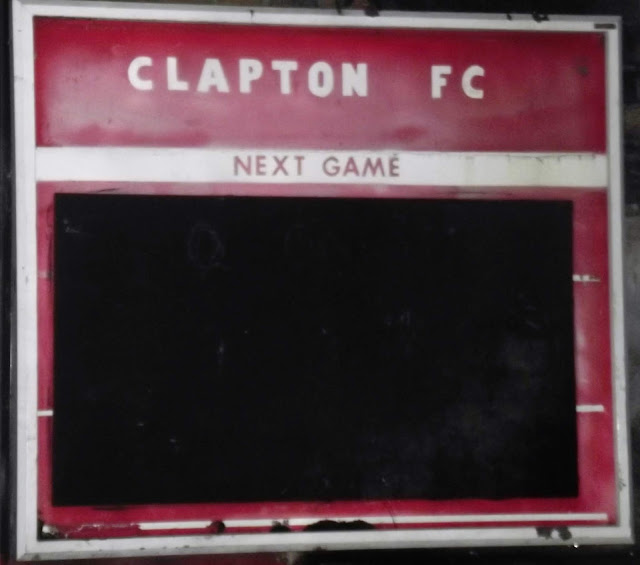 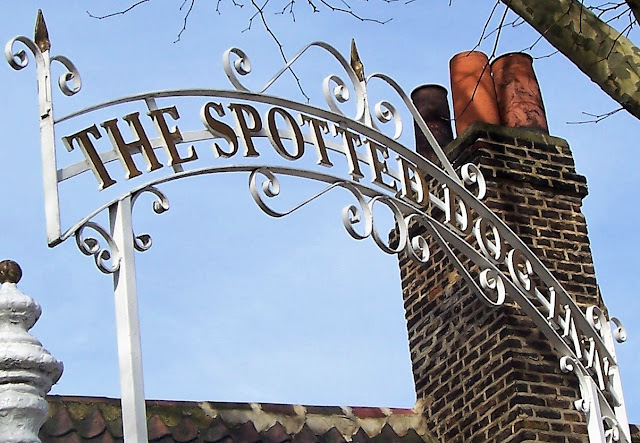 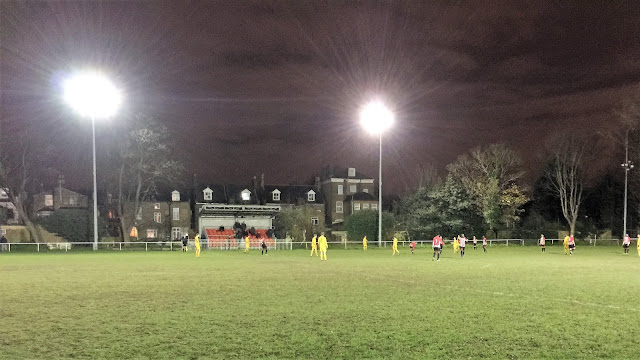 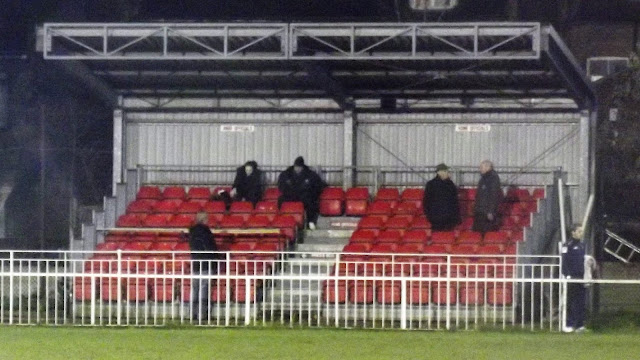 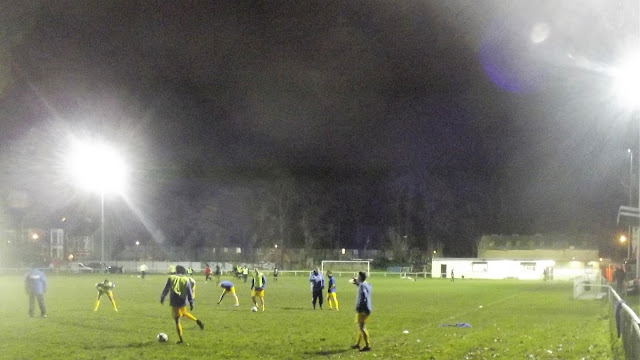 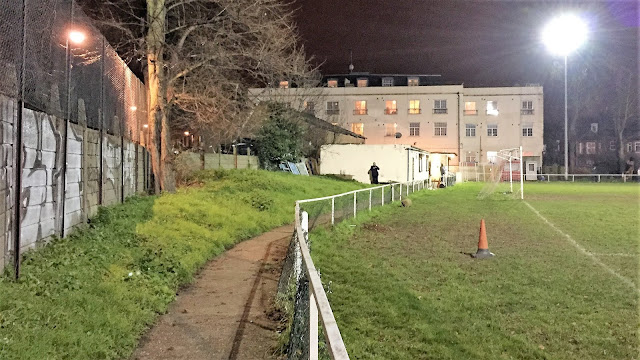 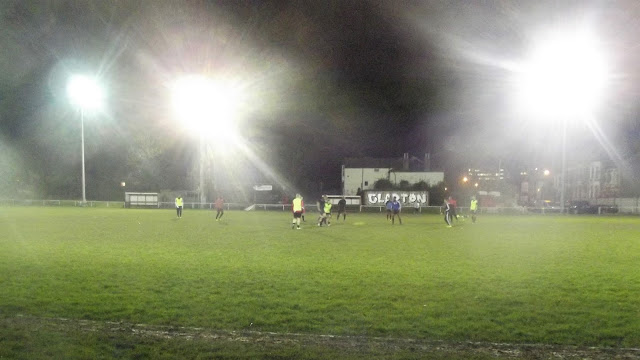 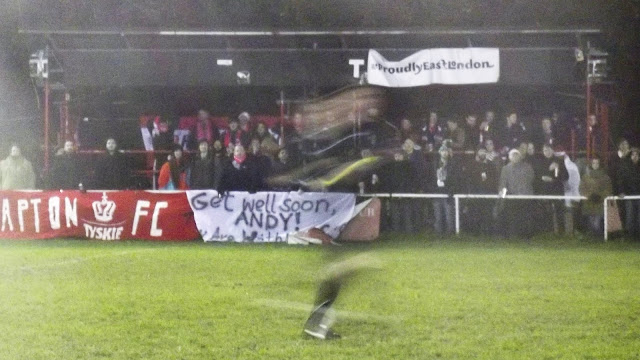 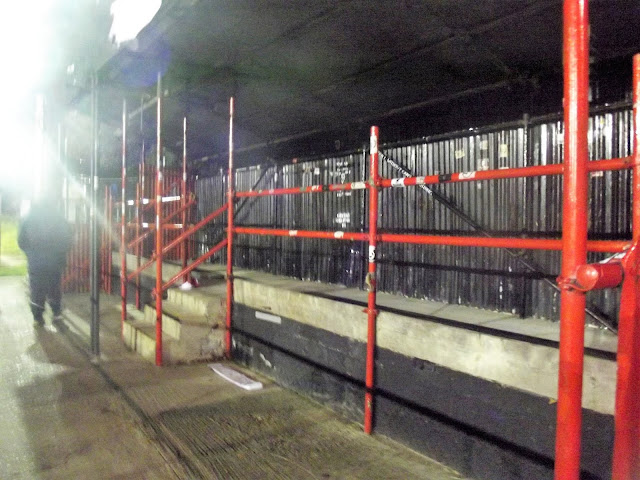 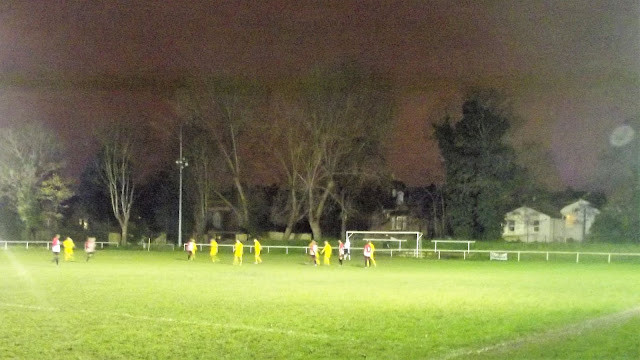 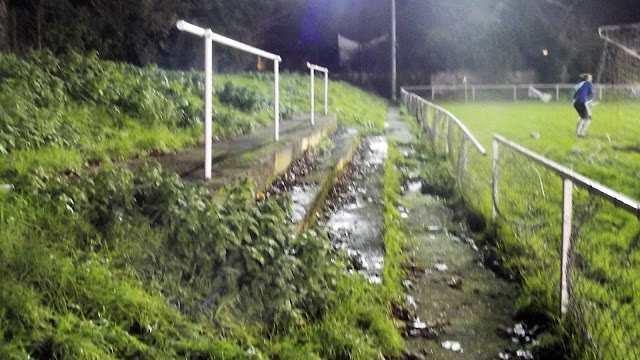