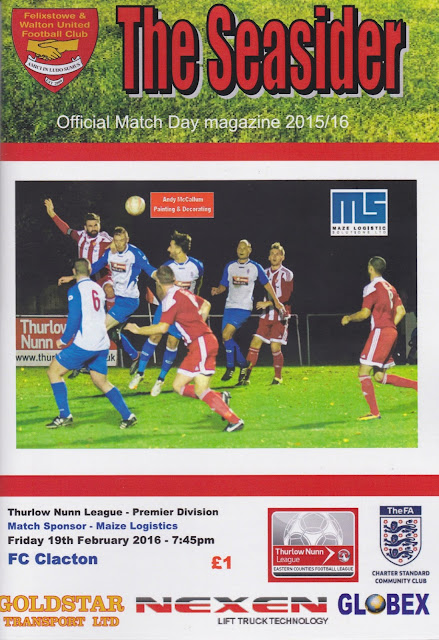 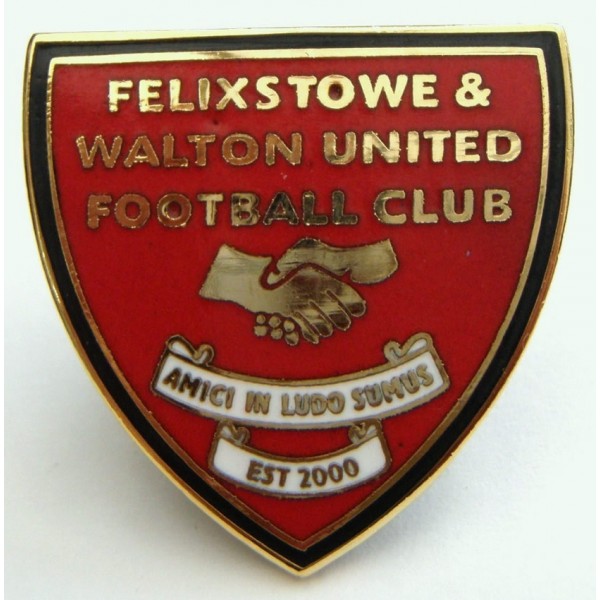 Felixstowe & Walton United were founded in the year 2000 after a merger between Felixstowe Port & Town and Walton United. For their first 2 seasons they struggled in the Eastern Counties Premier and were relegated to Division 1 at the end of the 2001/02 season. After 4 seasons at the lower level they went back up in 2006 after finishing as runners up to Stanway Rovers. In 2014 they had their best finish of 3rd place in the Eastern Counties Premier

In the FA Cup they got to the 2nd Qualifying Round in the 2010-11 season before going out in a replay to Southern League side North Greenford United. The following season saw their best ever FA Vase run, when they got to the 2nd Round. The merged club do not have any leagues or cup titles to their name as of yet, but will be hoping to change that in the future.

I'm always keen to do groundhops. For one thing, they save money, as opposed to going back and doing each ground on a separate occasion. But this hop had caused some annoyance amongst some of the groundhopping community, due to the Eastern Counties League not communicating with other leagues about groundhops. The North Berkshire League had already arranged their hop well in advance, and although I have no interest in covering a league whose venues are mainly fields, there are a fair few people who will. This would leave people having to make a decision about which hop to go on, thus reducing the number of people on each hop. So I could see why some got annoyed. It would also make arrangements tricky for the clubs, with no idea of how many would turn up and need food or programmes. The latter was my main worry, but then someone called 'Spanner' on the Non League forum offered to take advance orders and make up programme packs, so I ordered one and decided to head east for the weekend. I also booked a room in nearby Harwich for the night, so I could sleep over. 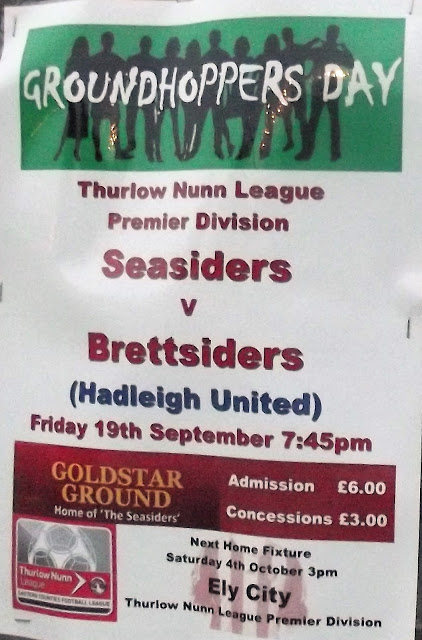 On the day of the game, I had to be up early to go for a heart checkup at the John Radcliffe hospital. As per usual there were no issues and I was in good health. What was a surprise and pleasing though was that I was in and out in 40 minutes. I didn't even have to pay to park. On the way back I filled up with petrol and got some stuff for the weekend at Asda. I then returned home for some lunch and putting my feet up for a while. While I was back home I checked out how long it would take to get from my accommodation in Harwich to my first game in Felixstowe tonight. I was shocked to see that it was 32 miles, as when I looked on the booking site it said 4 miles. It obviously thought I could walk on water. I did see if I could cancel and book elsewhere but as it was the day I was due to check in, I wouldn't have got my money back. Bang went the idea of checking into my room beforehand and I stuck with the original idea of going to the room after the game. Instead, I had a look for interesting places nearby and chose to take a couple of miles detour and have a look around Ipswich. 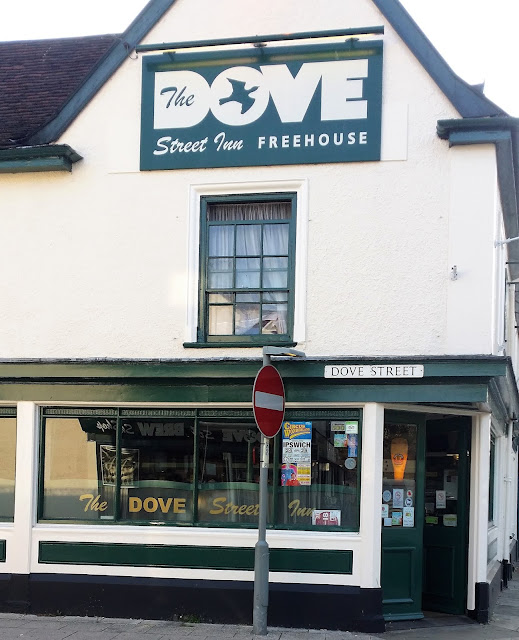 I left home about 2pm and was frustrated by the M25 and A14 having plenty of slow traffic. In the end I got into Ipswich about 4.30 after a 40-minute delay. I paid to park, initially thinking that the £1.80 an hour advertised was taking the mickey. But I put 1.50 in and it wouldn't take any more, that was enough for the whole night so I was well pleased. First port of call was the Dove Street Inn. It had come recommended initially from the What Pub website and then one of my old teachers Mr Stedman. As he was a pub enthusiast like me, I knew that it would be good. Usually, I like to try stuff from a different brewery, preferably a small local one, but in the case, a cider from Somerset, Hecks Glastonbury cider, ticked the box for a new cider and it was nice. As I had to drive in an hour, I had to stick to the single pint. From there I went to cash converters only to be disappointed that neither they or CEX had any of the Retro games I wanted. I then looked around some 99p and pound stores, getting deodorant, chicken, Irn Bru, Honeycomb and a money box in the style of a £5 note. One of the shops has 2 books, dedicated to some of Katie Price's many relationships, and in my mind, if you are interested in that sort of rubbish, then you are a complete dullard. By now it was 6pm and so I drove to Felixstowe, arriving at 6.25. With over an hour until kick off, I went in search of food. I went into town which was only a short walk. I walked past a few chippies and settled on a kebab house. I had a fancy Bursa Kebab which had donner meat, spicy sauce and yoghurt with pitta in a foil tray for £6.50. I sat on a bench eating that and checking Facebook before walking back to the ground. I arrived back at 7.10, picked up my pre-purchased pack of programmes and went into the ground and got some pictures. I killed time before kick off by typing my blog. 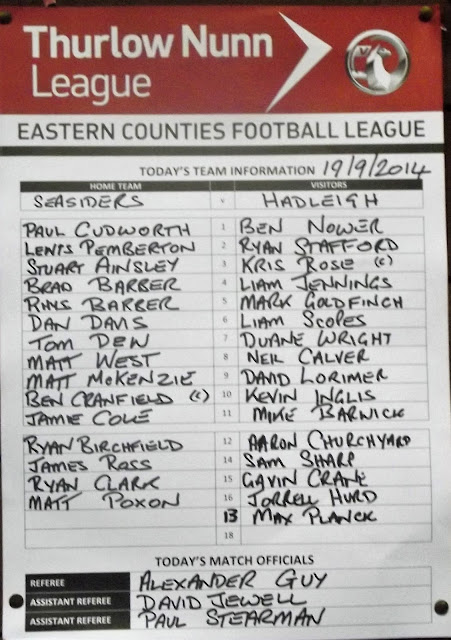 Postponed! Shortly after kick off time, the referee decided he didn't like the look of the fog, and so called the match off. This was despite everyone being able to see most of the pitch. Everyone had to get their money back at the gate, and no doubt the club lost out on money. I have seen games in far worse conditions than this, most notably Wycombe v Marlow in a 1994 Berks and Bucks tie which Wycombe lost 3-1 with first team keeper Paul Hyde playing up front! You could barely see the players then, but that referee decided to continue until the end. By the time it came to leave the fog had cleared, proving beyond all doubt that referee Alexander Guy was incorrect in calling it off. 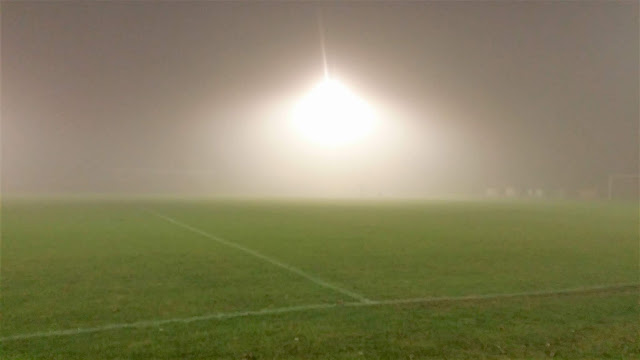 I drove back to Harwich, which turned out to be 40 miles away. And guess what, I didn't need fog lights! I checked into the pub where I was staying, had about 20 minutes in the room for my phone to charge. The pub was no great shakes, so I walked over a mile to the Alma in Harwich town centre. After a pint and a bag of chips, I came home, having a pint at the pub where I was staying and went to bed, hopeful that there would be no more disruption to my weekend. 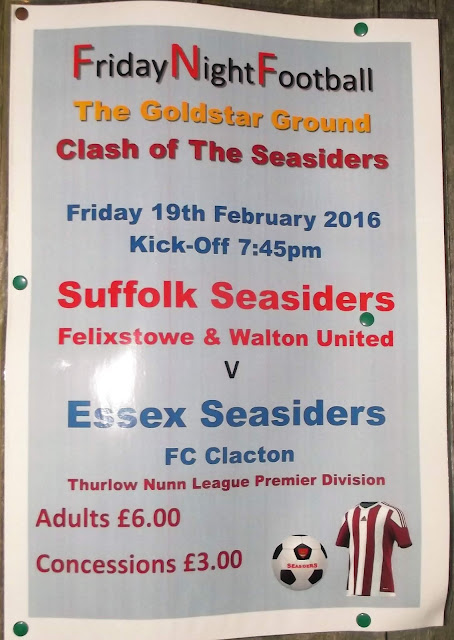 So, finally, the time came when I’d be able to make use of the blog that I’d spent considerable time doing. I wouldn’t be getting any of the £50 that it had cost me in hotel and extra petrol costs, but at least it would go some way to getting the monkey that is Alexander Guy off of my back. That of course was the referee that wrongly abandoned the game last time, to the frustration of 200 fans. I only found out after the game that he was the referee at last weeks game at Hadleigh, and had I known I’d have had a civil but sharp comment for him. Like last week I’d have Braintree fans Dan & Maurice with me, which would help out a bit with petrol, though sadly my normal hopping partner Anwar had already done this one. 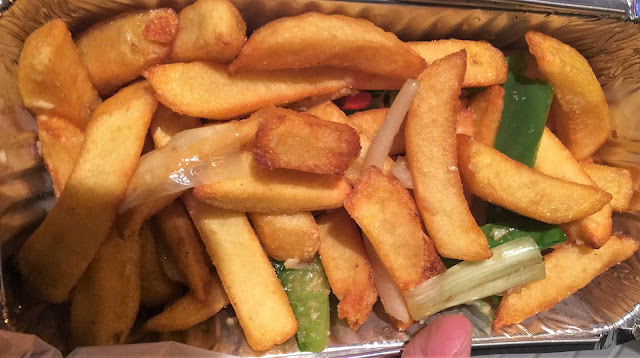 It was a busy day at work, even so I was out by 1, which meant I had a couple of hours at home before having to leave at 3.30. There was nothing like the traffic issues of last week and I only had 10 minutes delay on the M25. I stopped for the toilet at a petrol station on the way to picking up Dan and Maurice. We had a good trip over, getting to Felixstowe at 6.40. After a quick look around the ground, I purchased an excellent programme for £1, before heading into town for dinner. There I got salt and chilli chips from a takeaway called Beijing, eating them on the way back to the ground. I popped in the bar before the game. Aspalls cider is common in this part of the world, and decent it is too. This bar had one of their specials called 'Harry Sparrow' which I've only had once before. So I had a pint of that before going in, 5 minutes before kick off. 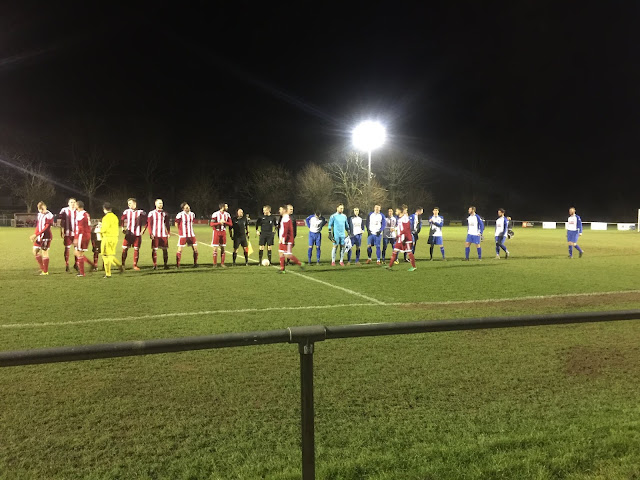 The game was end to end with Felixstowe opening the scoring on 19 minutes with a deflected shot. 6 minutes later they doubled their lead with a great curling shot from just inside the area. To add insult to injury Clacton found themselves locked out of their dressing room at half time. On a chilly night, the hosts made it 3-0 with a close-range finish following a well-taken corner from the left. Felixstowe should have had more but they did get the 3 points, much to the delight of the majority of the 165 crowd. I dropped the lads back in Braintree at 10.30, getting home myself at midnight after a reasonable journey back. 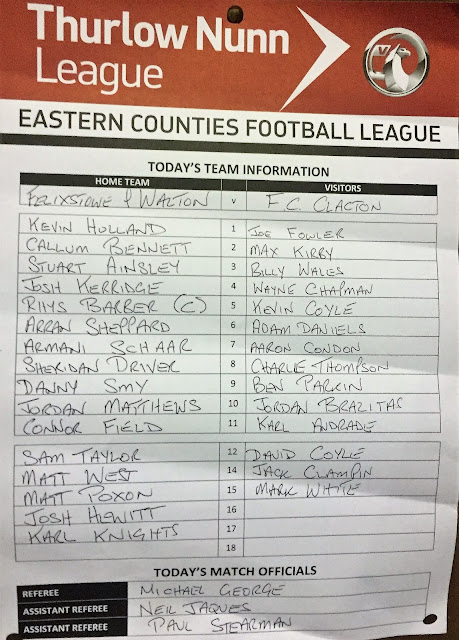 THE GOLDSTAR GROUND is quite typical of step 5 grounds, with metal pre fabricated stands. One seated holding around 120, with cover for 200 standing in another area. There were 2 tea bars, one in the bar which did a wide range of stuff, and a more basic one in the ground which also doubled as a club shop. The bar was decorated with club stuff and had your standard range of drinks. 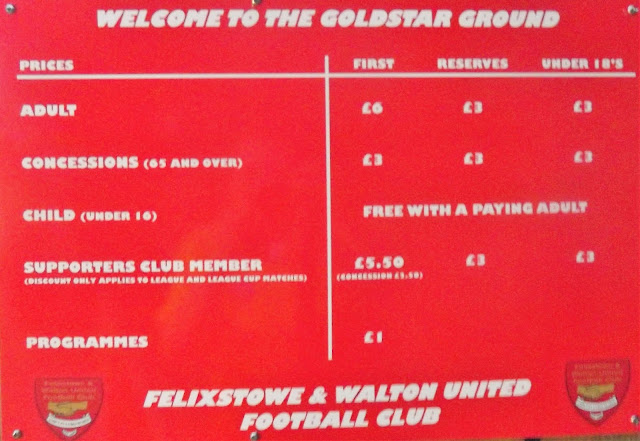 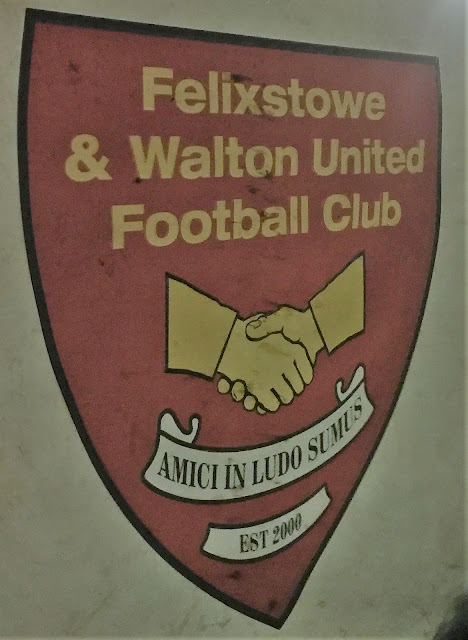 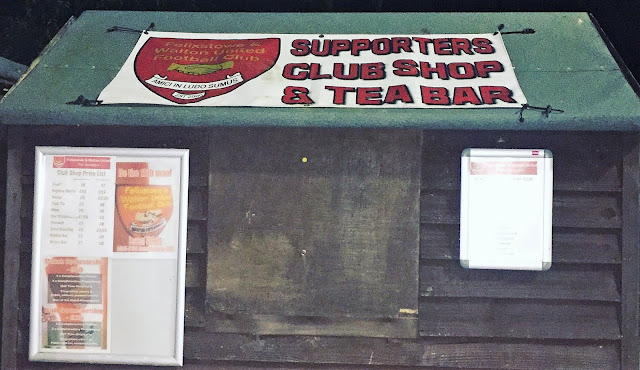 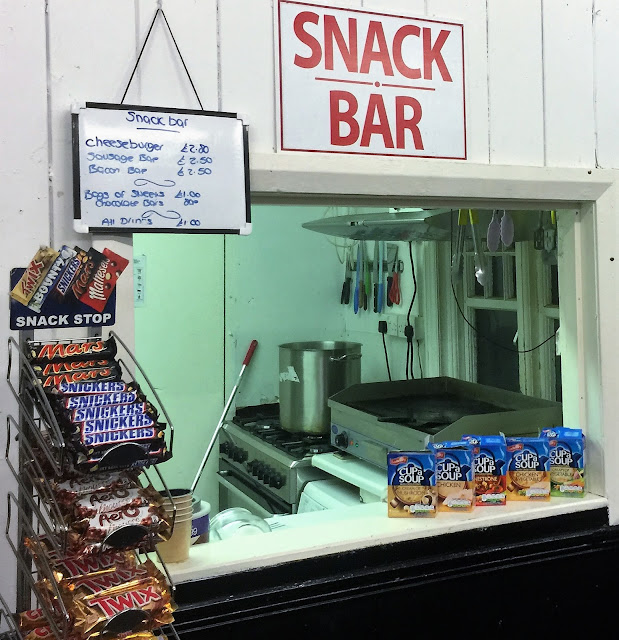 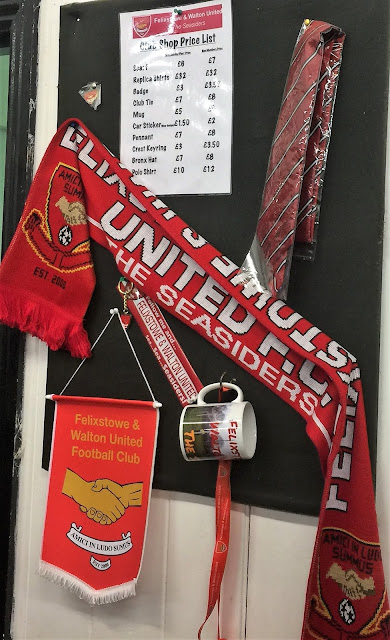 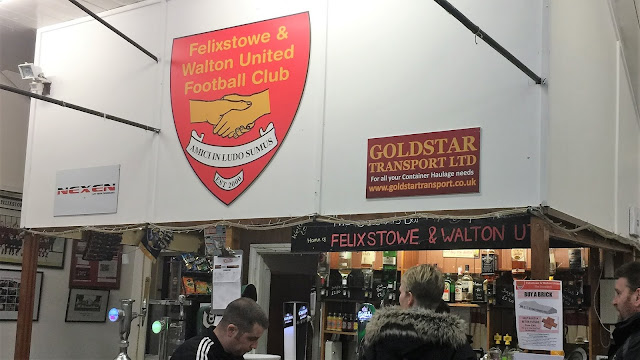 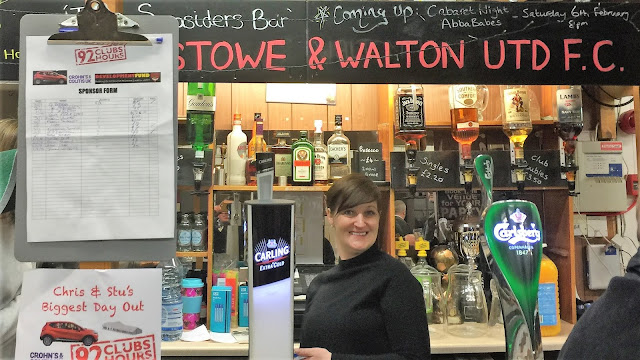 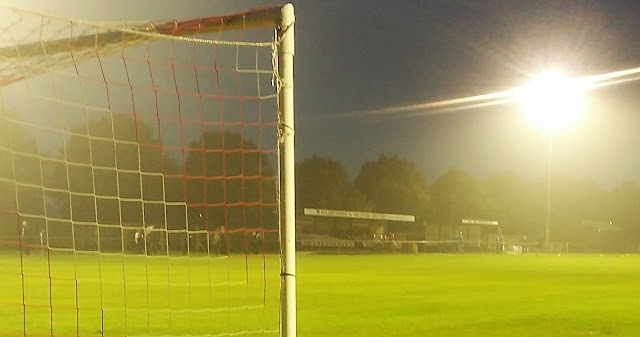 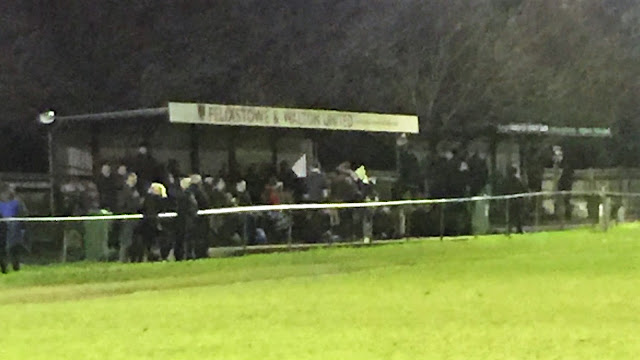 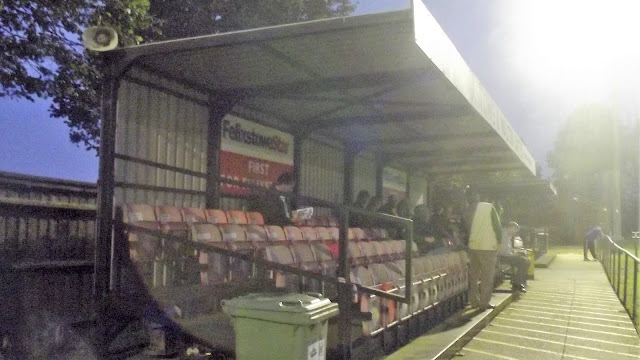 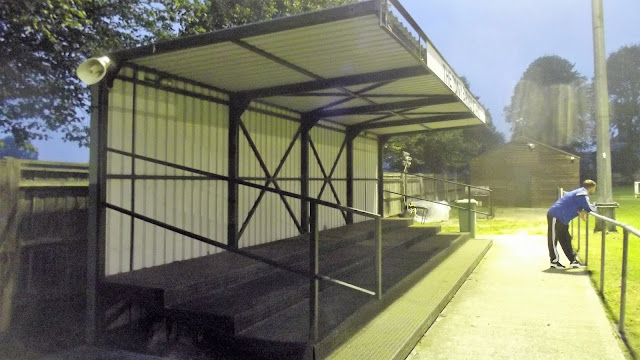 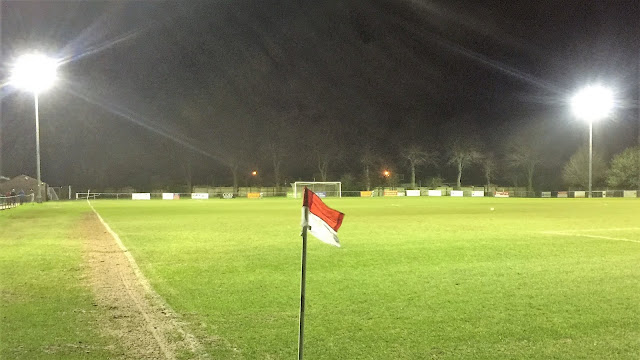 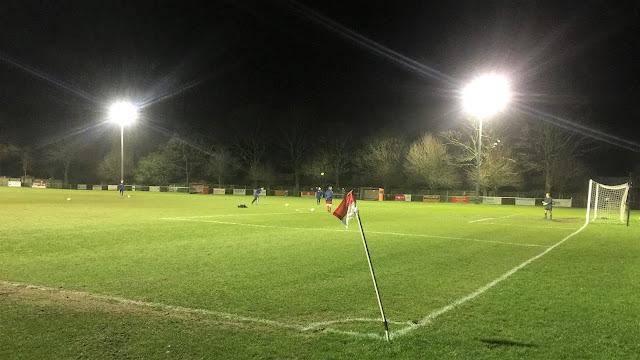 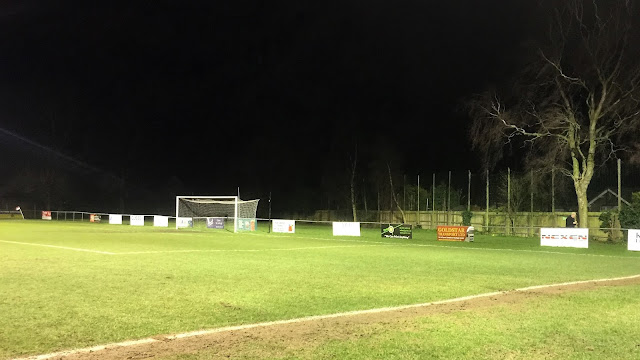