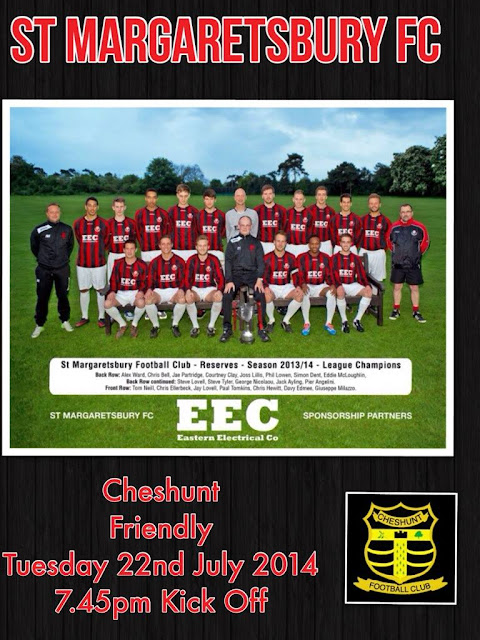 St Margaretsbury were formed in 1894 as Stanstead Abbots (the name of the village in which the club is located), changing their hame to their present monicker in 1962. They played in the Hertfordshire League up until 1992, when they took the step up to the Spartan League. They won this league in 1996 but did not take the promotion. A season later the league amalgamated with the South Midlands League, and the best finish since was 3rd, achieved in 2004. This was the same season as their best ever FA Cup run - beating Henley, Harpenden Town and Leighton Town, before losing 2-0 to Kettering Town in the 3rd Qualifying Round. The best ever FA Vase run came in 1985-86, their first ever season in the competition. They needed 2 replays to see off local rivals Arlesey Town in the Preliminary Round, eventually losing 1-0 to Wisbech in Round 3.

My pre-season was continuing apace, as I was well into double figures, less than 20 days since the start of my season at Lincoln. The Spartan South Midlands League was one that I was getting close to completing and with the weather being hot and the game being pretty local, it seemed like a good choice. I spent the day relaxing at home as it was my day off. I had plenty of time to spare but didn't feel like doing anything, but I did at least make a start on tonight's blog before I left home at 5pm. After getting to Anwar's at 5.30, we were on our way. Even with 20 minutes delay on the severely flawed M25, we were still there at 6.45, a full hour before kick off. The gates weren't even open, so we waited outside in the sun until they did. Eventually, the gate opened just after 7.15 and we were given a friendly welcome after paying our £5 entry. Sadly there were no programmes though, so I started making one on my iPad as I have started to do with all games that don't issue. After that, I checked Facebook and took a seat in the stand for kick off. 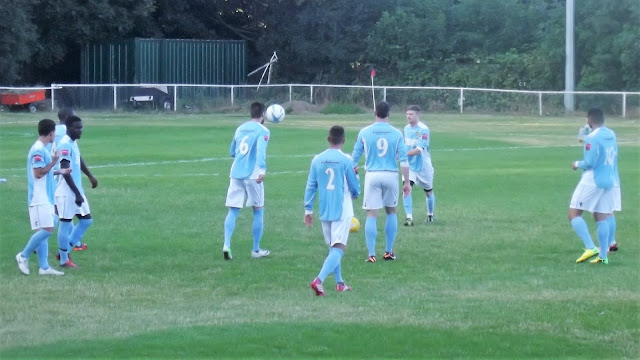 St Margaretsbury who had finished 4th in their league the last 2 seasons in succession started brightly against their opponents who were a division above. They got their reward 10 minutes in when the home side opened the scoring with a cracking 30-yard thunderbolt that went in off the bar. They had the ball in the net again after 20 minutes, but the effort was ruled off for offside. Cheshunt had to make do with the occasional counter-attack but that didn't stop one of their fans shouting out instructions every 5 seconds, which started to grate after a while seen as he was sat just behind me. In fact there were a fair number of fans from there making a bit of noise, although it was a bit one sided as I didn't see anyone cheering for the home side. In the end, I moved out of the stand and stood further along the grass bank. The visitors soon started to get back into it, and on the half-hour mark they got a cracking equaliser. St Margaretsbury had a penalty claim, and I found out they did have some vocal support when a fan raised the claim with the tubby linesman. The official replied by telling him to shut up, and when heckled again, told the fan he was boring. I tried to get some chips at half time, but they didn't have any in stock. Instead, I had some grapes that I had bought earlier while checking what games were on at the weekend. The second half was a lot more restricted in terms of chances, but St Margaretsbury did have another strong penalty claim though, which was turned down flat by the referee. As the game wore on, it looked as if my pre-match prediction of 1-1 would be correct. The linesman copped some more stick and the Cheshunt keeper made a couple of great saves late on to deny the hosts a winner. They were not to be denied, however, and right at the death, they scored 2 quick goals. First the number 9 rounded the keeper to give St Margaretsbury a deserved lead, and then the same player had an easy tap in after Cheshunt failed to cut out a low cross, much to the fury of their keeper. It had been a good game and an enjoyable evening, with a deserved victory for the hosts. The only downer was getting flashed by a speed camera on the way home, on the M25. I will have my fingers crossed that nothing will come through the post in the next few weeks, as I want to keep a clean licence. 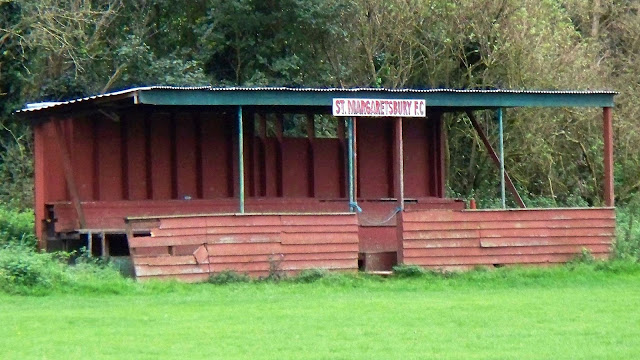 
THE RECREATION GROUND is a pretty nice venue to watch football. The only area of cover is a combined seat and terrace stand, which probably holds around 300 in total. It is up on a bank, so you get a good view, even though there is a floodlight pylon in the way. I didn't try the tea bar or clubhouse, but both looked pretty smart, and above average for this level. 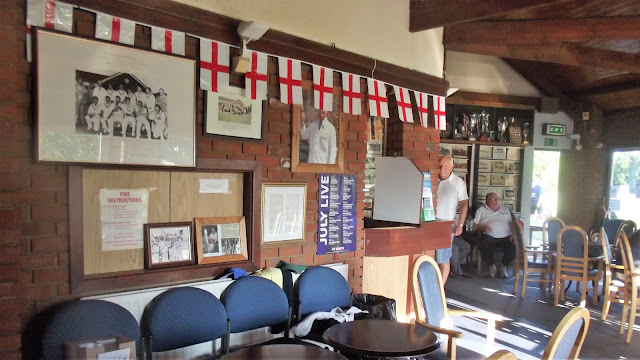 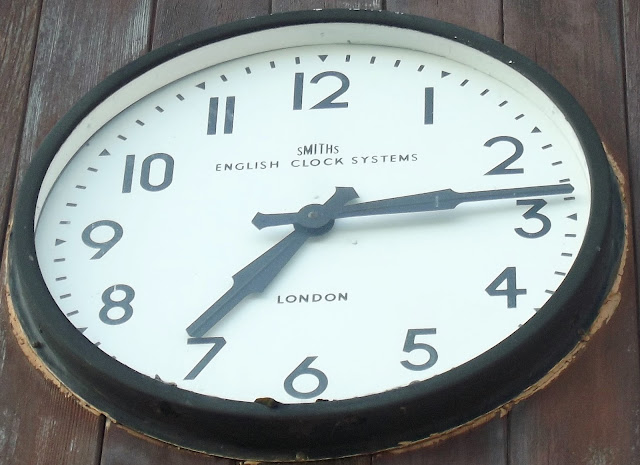 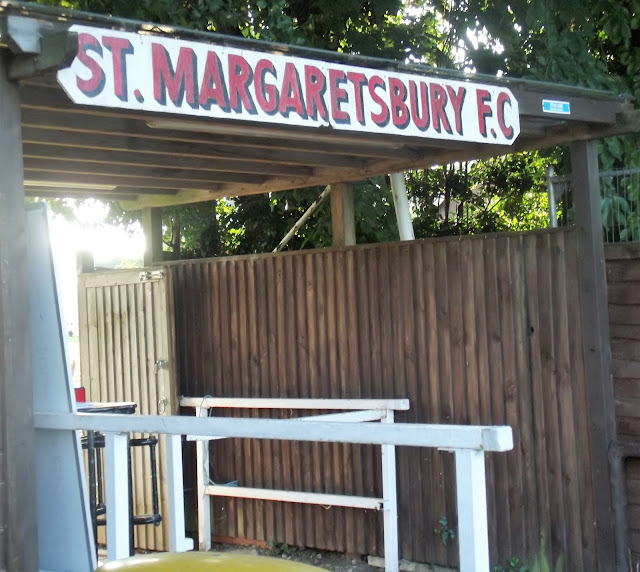 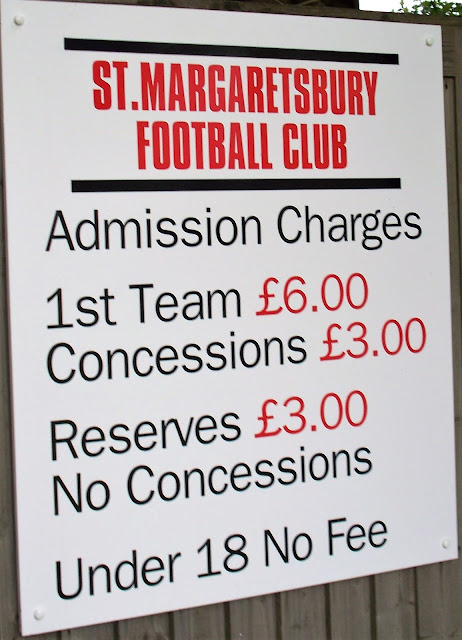 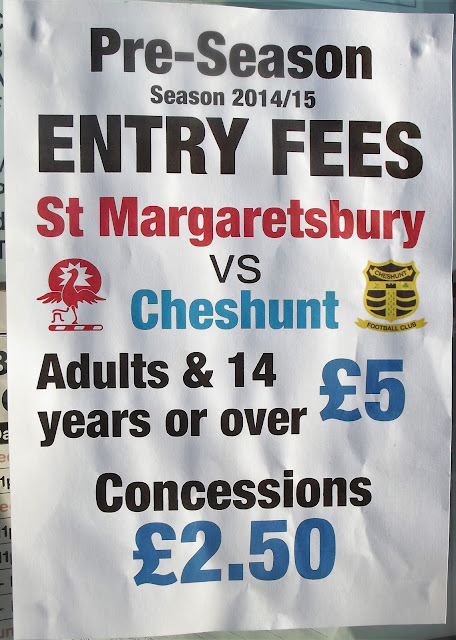 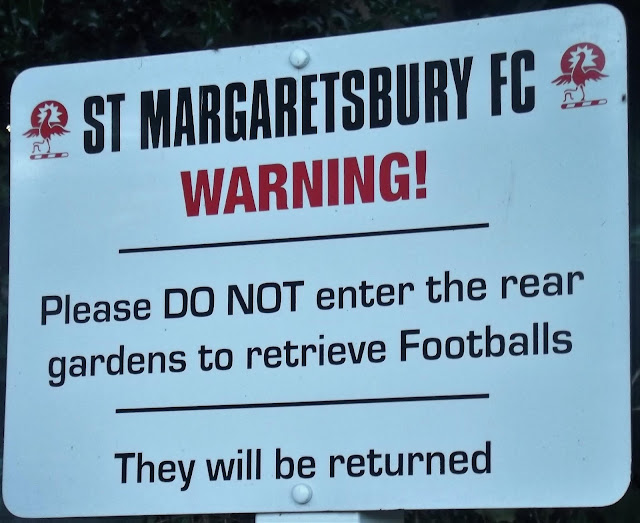 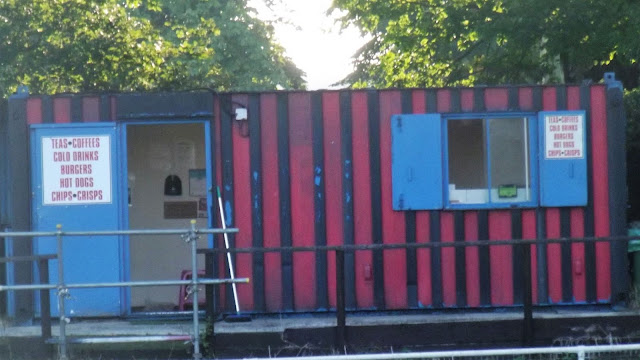 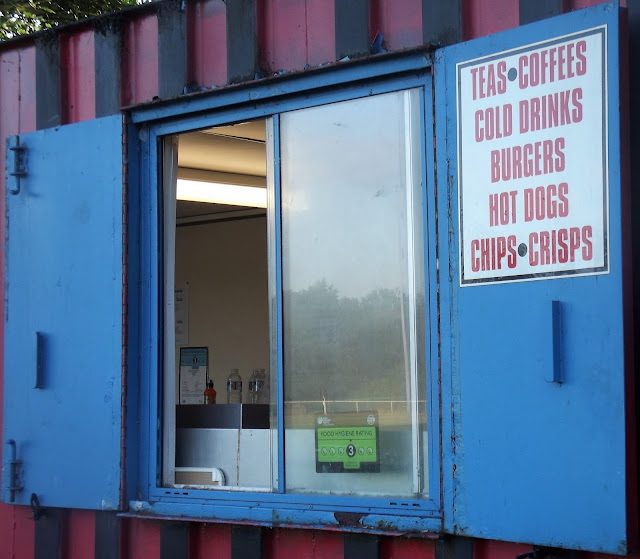 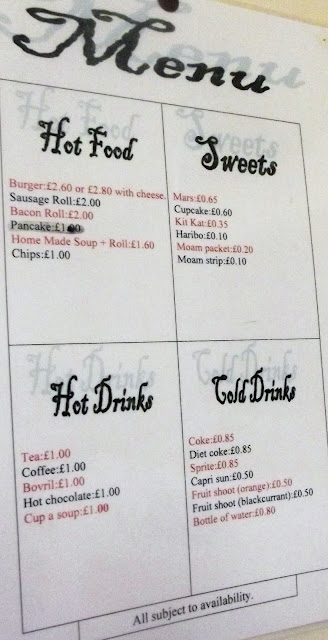 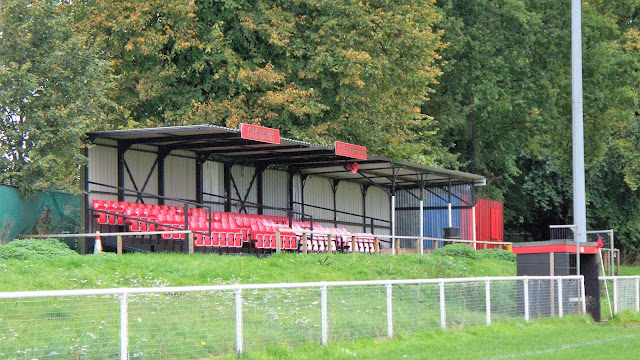 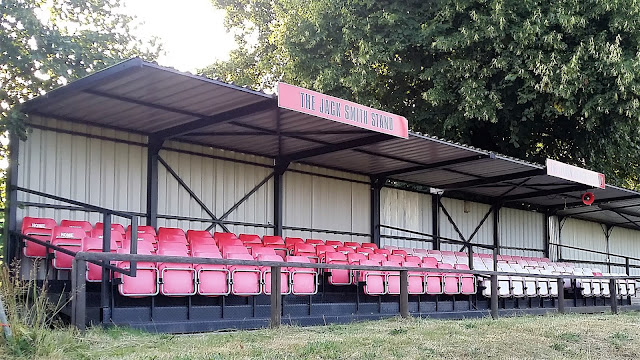 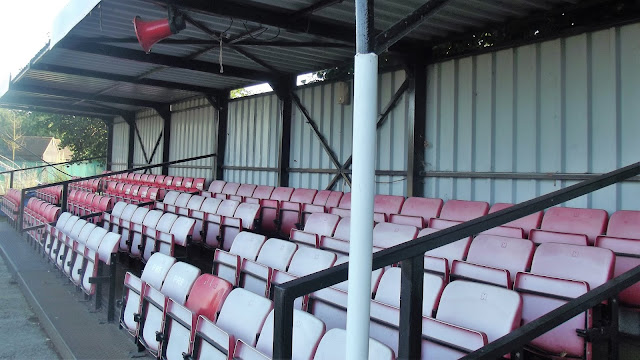 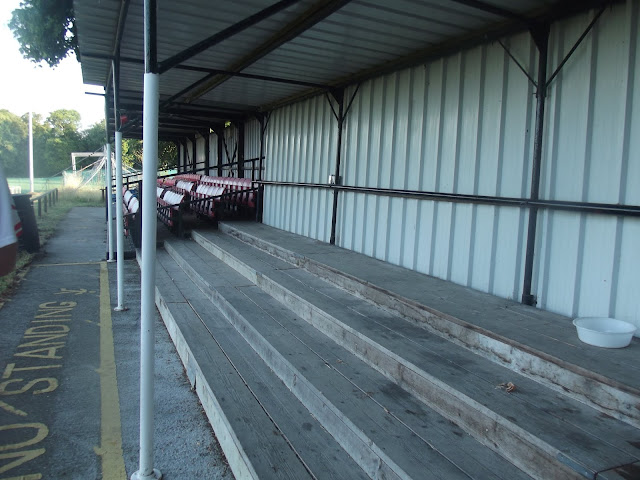 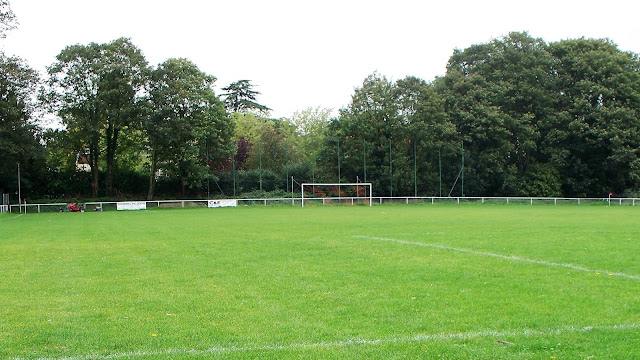 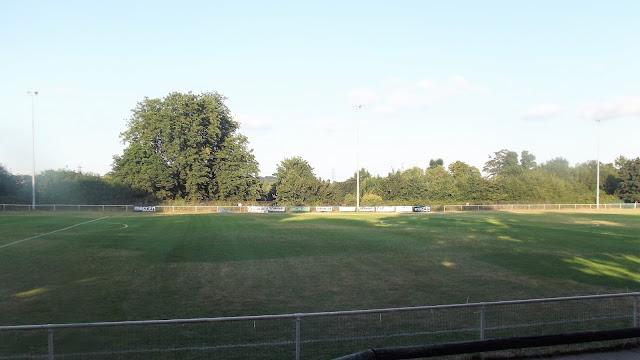 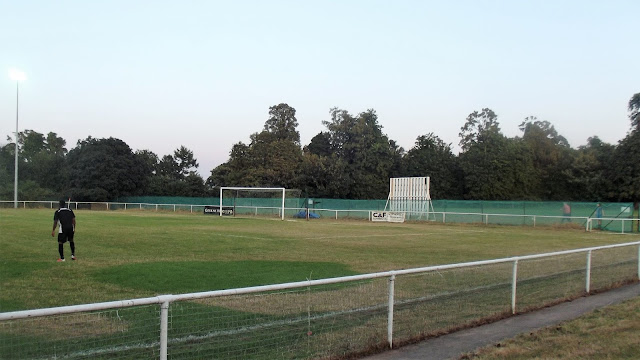 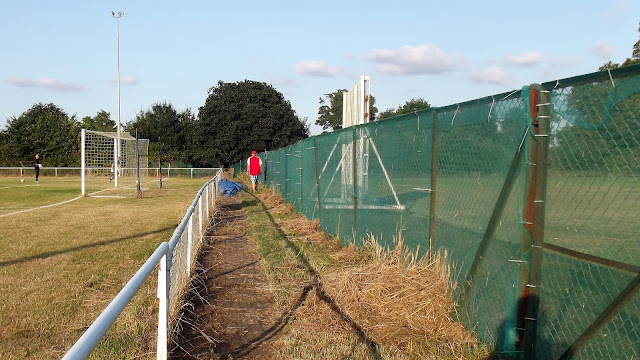