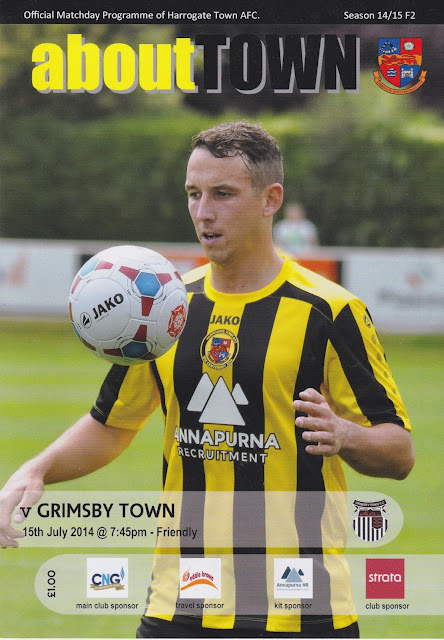 Harrogate Town FC was formed in 1914, playing their first competitive fixture in 1919, this being due to the first World War getting in the way. Initially playing in the Yorkshire League, they gained promotion to the NCEL in 1982 and 5 years later were in the NPL, after a series of good finishes. They stayed in the League's first division until 2002, and a couple of good seasons there left them being admitted to the Conference North when that was formed in. Apart from a few seasons of struggle between 2009 and 2012, they have always been amongst the front runners in the league, but have yet to make it into the Conference Premier. The club got to the 2nd Round of the FA Cup in 2012, taking fellow non-leaguers Hastings United to a replay, but losing on penalties. It must have been gutting for the club, the Sussex side went on to play Middlesbrough at the Riverside Stadium in the next round, and gave a very good account of themselves. The club has never got very far in the FA Trophy, the best being the 3rd Round in 1999. On that occasion, they beat Spennymoor Town, but the tie was ordered to be replayed, and they ended up losing that game. 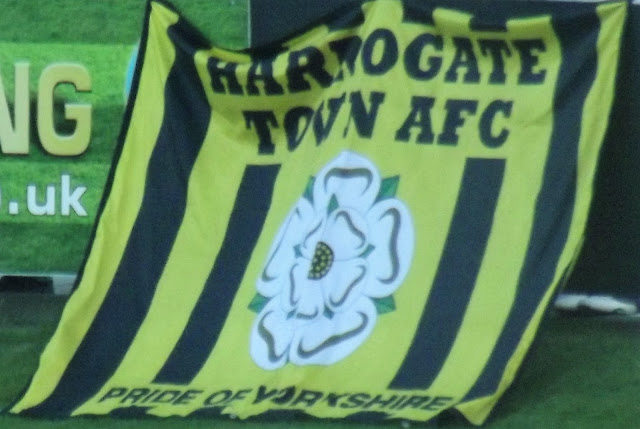 As I'd not be seeing my Grimsby based mates at a game next season, that is unless a favourable draw came up in the FA Trophy, I was hoping that a pre-season friendly would come up at a ground I had not been to. Indeed it did and I was pleased when Harrogate Town v Grimsby Town was scheduled for my week off.  It would be an expensive one, but my birthday week also, so I decided to treat myself.  It would also see Grimsby's cult hero John McDermott face his old club for the first time, as he had retired from football and gone on to take the assistant manager's job at Wetherby Road. He's played in pretty much every game between Wycombe Wanderers and Grimsby. We have a surprisingly good record against the men from Cleethorpes, and for a few years we followed each other around the lower reaches of the Football League, before the club were relegated in 2010. At the time I wasn't that fussed, but I've got to know a lot of people from Grimsby who are all fantastic, so I have been hoping for them to return. We came close to swapping divisions at the end of the season, but Wycombe's last gasp survival and Grimsby's playoff defeat to Gateshead put to bed any chance of that happening. I will cover the meetings between 2 clubs when I rewrite my blog on Grimsby at some point in the future. If you want to know more about McDermott, you could do no worse than reading his autobiography, which is a fantastic and riveting read and one of the best footballing books I have read. 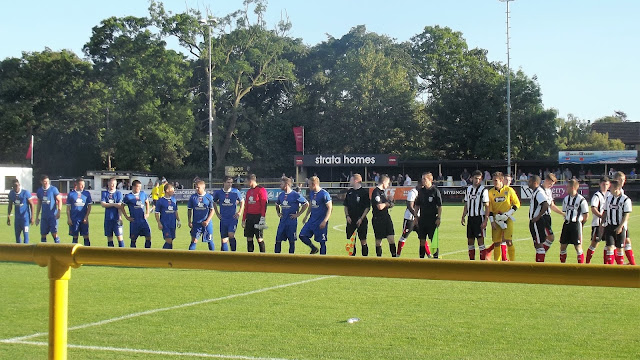 On the day I woke up around 7, watching last nights Coronation Street and a few other bits. I had a bath, leaving around 10.15. After stopping for petrol and at a shop to get drinks for the journey, I was on my way. The plan was to stop at Mansfield to meet a couple of mates and have lunch. I got there at 1.30 and seen as I needed the toilet, chose McDonald's. I'd not eaten there for around 10 years, but the Chicken Chilli Burger and Fries were nice and good value at £2.20. But best of all was meeting Andy and Rob and they were good company, as we had a decent chat about footy. On surprise was that John Sutton, a striker who failed massively at Wycombe, was flourishing once more in the Scottish Premiership.  Also with the first meet out of the way, it will be a lot easier when we meet at the games between Wycombe and Mansfield later in the season. After leaving town, I briefly drove to AFC Mansfield, an ambitious club who last season were promoted to the NCEL Division 1. The plan was to get in and take some pictures, but with the ground locked and nowhere to park easily, I reprogrammed the Sat Nav for a road in Harrogate where I could park and made my way North. It was not pleasant, with Average speed cameras through roadworks making me drive at an unnatural speed and feeling all claustrophobic and trapped in against everyone doing the same. Then there was the A1, with its 2 lane section proving a right pain, with selfish lorry drivers going in the right-hand lane and slowing everyone down to 20mph because their vehicles could not cope with the steep parts. However, I was in Harrogate as planned at 5pm and after parking my car, I took the half hour walk into town to get some dinner and a drink. My destination was Wetherspoons, and It was the cider festival. I ticked one of my few remaining ones off the list (Doctors Orders) and ordered chicken skewers and chips for dinner. Both were very nice. It was the only cider I had to try, but I fancied another pint. So I ordered a Welsh Gold Perry from my favourite brewery and settled down to drink my pint while typing my blog and checking Facebook using the free wifi. After the half an hour walk back to the ground, I went back to the ground and got my camera out of the car. I paid £8 to go in (most expensive of the season so far) and a ridiculous £1 for a single sheet programme. Carrying on, I went round to the stand to meet William, Kieran and Callum and settled down to watch the game. Later Tarran and Ben showed up and it was nice to watch the game with good company. Below is the report from the Harrogate Town Website, very smartly done IMO 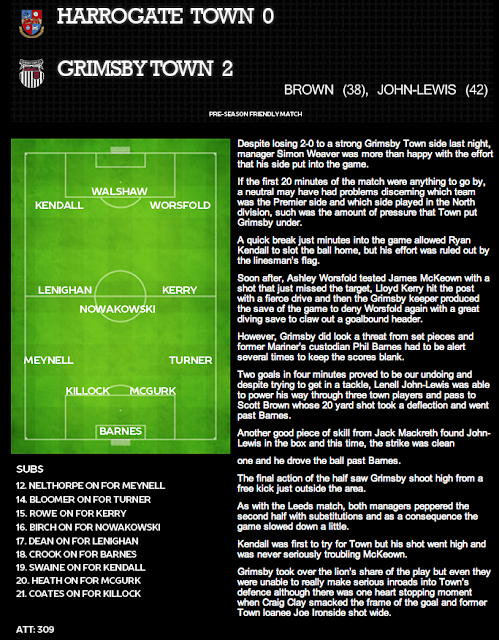 For an alternative view on the game, you can read Kieran's report HERE

After the game, I said my goodbyes and made my way back to the car. Before I left Harrogate, I stopped at ASDA to get a drink and something to eat. As I was coming out of the store, I saw Ben and so offered him a lift home. Once I’d dropped him off, I pulled over and set up my radio for the way home, turning my 3 MyFi thingy on and plugging the FM Transmitter into my iPad. I tuned it to Pete Price on City Radio, but sadly an hour in, the battery on the transmitter conked out and I couldn’t be bothered to fiddle about getting the lead out of the boot. Those who know and listen to Mr Price, or have indeed listened to him, will be surprised to hear that he managed to get through the first hour without getting angry, as he is well known for his short fuse as lots of videos on Youtube testify. But it’s a great listen in any case. For the rest of the journey, I listened to a variety of Music and TalkSPORT. I made steady progress down the motorway, with a couple of minor delays. By far the worst was the endless average speed check area on the M1, which was a pig to drive through and added considerable time on my journey. Even so, I was able to get in by 1.30am, with the sat nag initially saying 2am, so I made up some time. It had been a good day, meeting lots of great people, faces old and new. It had cost me nearly £70 all in, with £44 worth of fuel being the biggest contribution. For my costs that I monitor, I will charge that and the £9 I spent at the ground to my ‘Football Expenses’, the rest of it can be put down to socialising. Even though it had probably been a day and a half wages, I had a good time, and so it wasn’t too much of a problem. I sat up chatting on Facebook to Kieran before going to bed at 3am, happy that it was my week off, otherwise, I’d only have got an hours sleep. 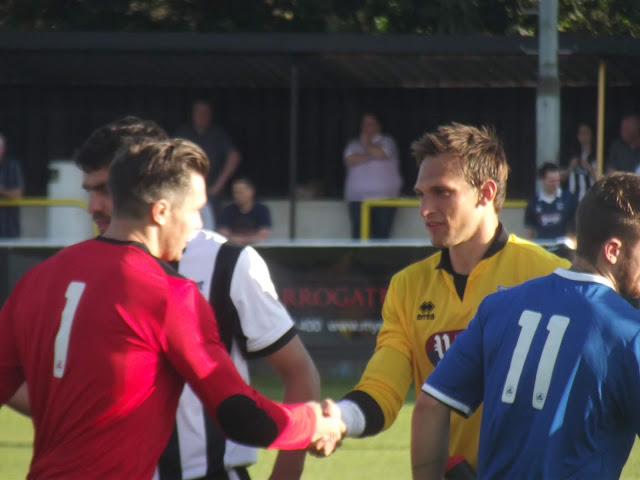 WETHERBY ROAD is a pretty smart ground and about average for the Conference North. 3 sides are covered, with 1 side seated and 1 end and  1 side terracing. There is one remaining open end, but I’d guess that it would be OK for the Conference North. Even though £8 was the most expensive I had paid so far for a pre-season friendly, I felt it was a fair enough price. What was a bit naughty was the £1 programme, which was just a single sheet, albeit a well presented one. The club shop was closed too, as its often the case with friendly games. I also didn’t get a chance to try the tea bar or bar, though the nice looking and historic town is just under 30 minutes walk away if you have time. 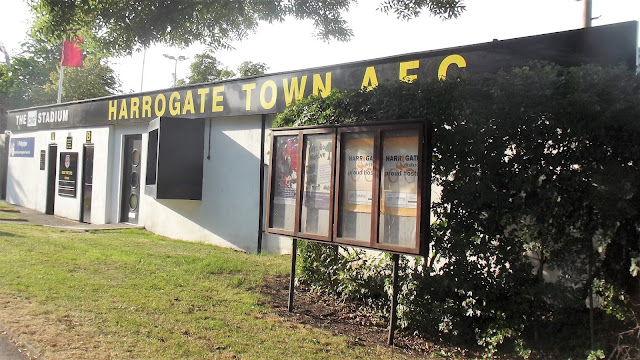 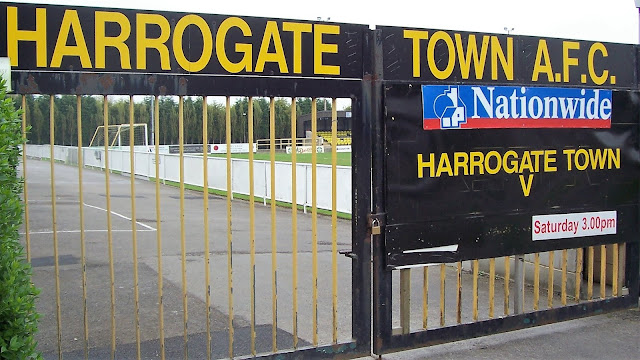 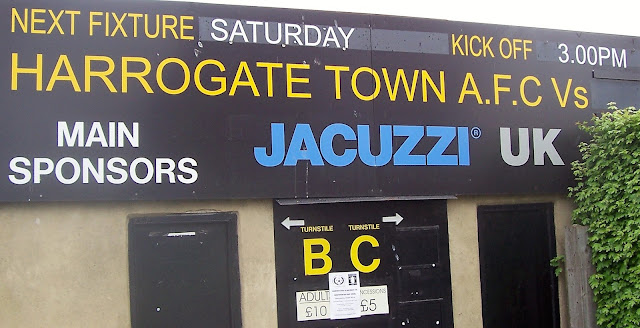 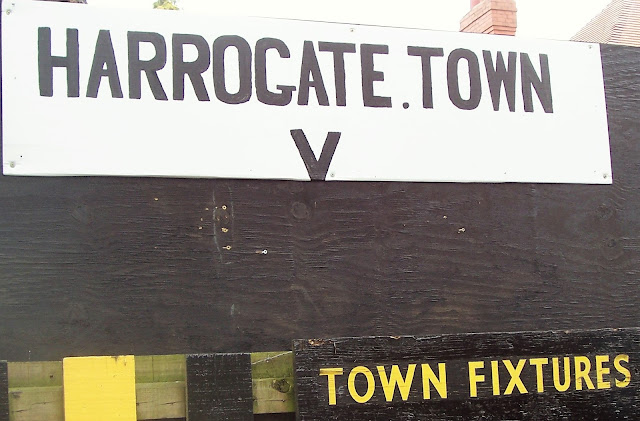 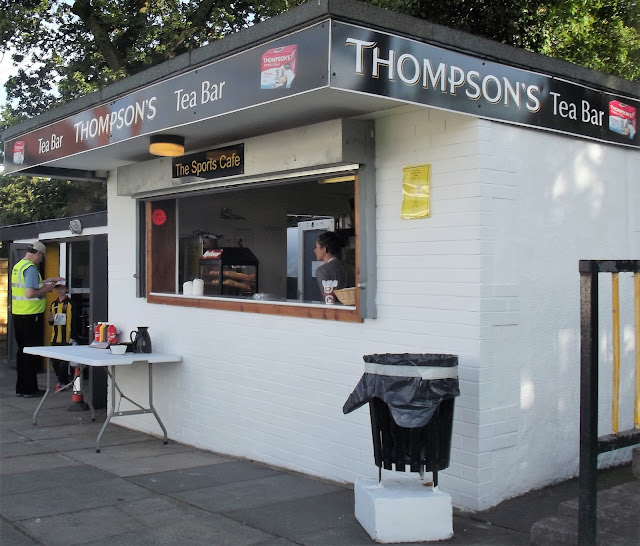 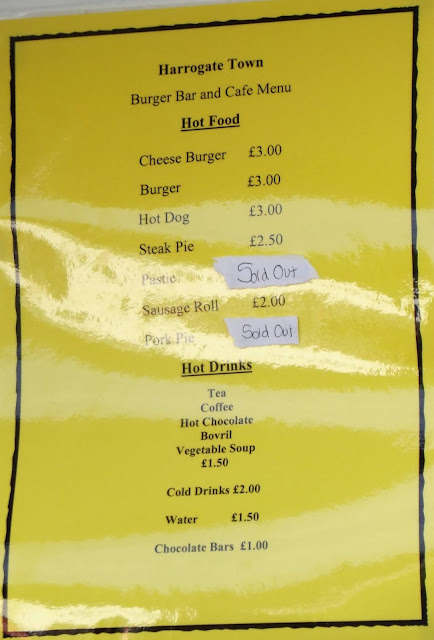 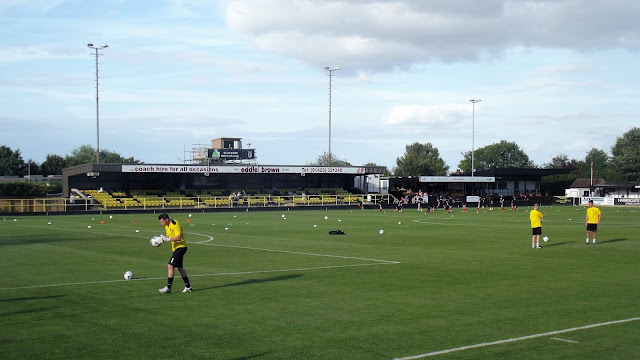 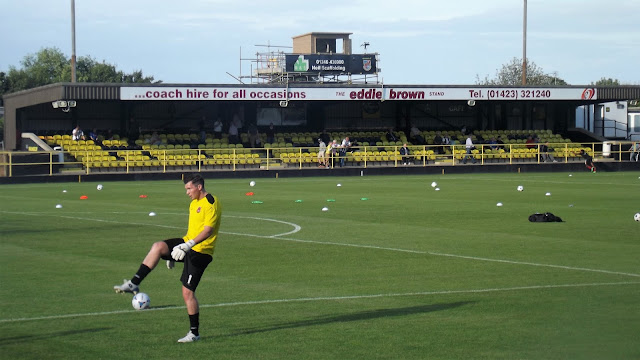 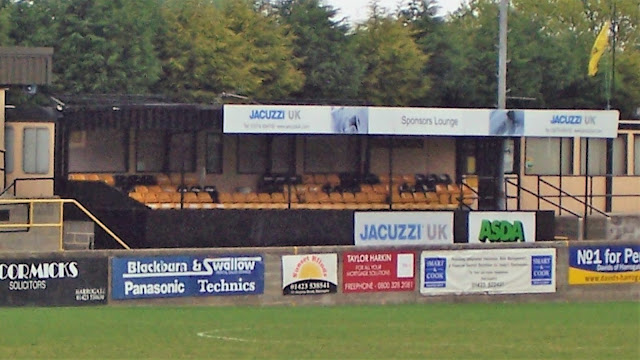 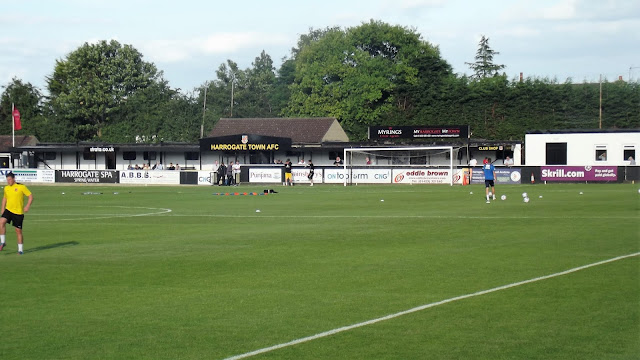 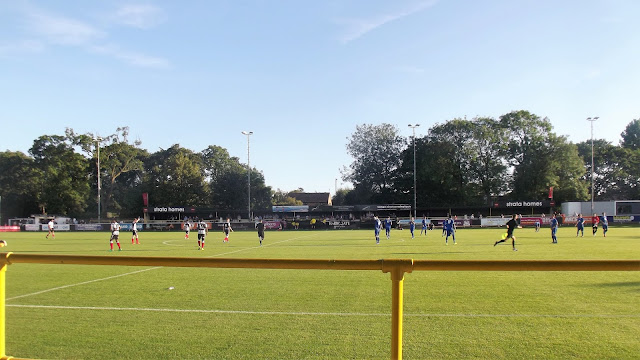 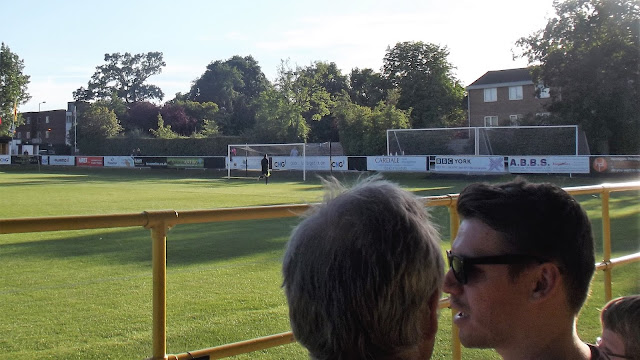 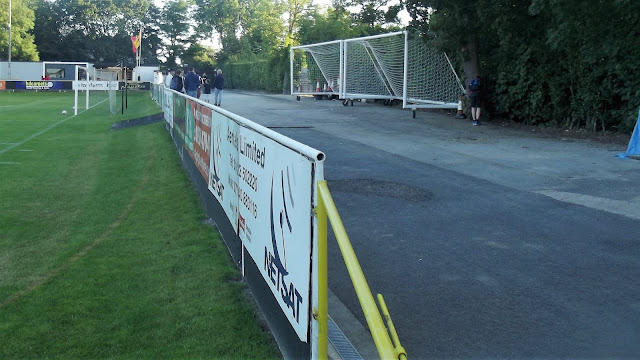