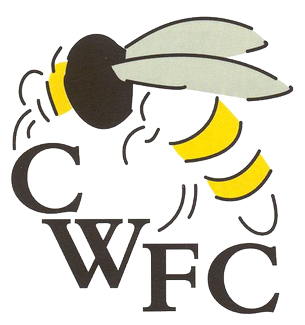 Chalfont Wasps FC was formed in 1922. They spent much of their history in local leagues until 1984 when they joined the  Chiltonian League. This league merged with the Hellenic League in 2000 and 8 years later Chalfont Wasps were crowned champions of the Division 1 East. They finished a superb 7th in their only season in the Hellenic Premier but were demoted due to an insufficient ground. They have had a mixed bag of finishes since then, ranging from 4th to 9th. Last season saw a 6th placed finish. They have only ever played one game in FA Competitions, this came in the Vase in 2008, when they narrowly lost to Kidlington in the 2nd Qualifying Round. 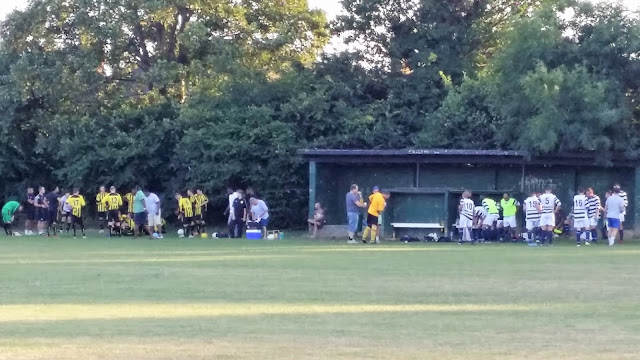 
Originally on this night, I had been planning to go to the delightfully named Eversley and California v Aldershot Town. This match had been announced months ago and was one of the first I had planned in, as it was due to mark the opening of the home sides floodlights. I had looked a few weeks ago, and there was no mention of the game anywhere, nor any updates on the hosts' site. Someone even mentioned to me that the club had bitten the dust, so I decided to scrub it off of the list. This date remained vacant until pretty much the day of the game when I decided to go fairly local to Chalfont Wasps v Marlow United. I did consider this previously, but with seemingly no one manning the home club's Twitter, they were unable to tell me whether it was at their home ground or not. In the end, Marlow United's Twitter confirmed it, so it was all systems go. On the day of the game I was working, but only till 12PM and it was a pretty easy day. I spent the afternoon watching TV, typing my blog and chatting online before having dinner and leaving at 6.15. I left on time and in the end, the journey was a lot quicker than expected, with me getting there in 20 minutes. I parked up and checked my phone for messages before going off to find the football pitch. It was very basic with only the one area of cover and only a handful of people watching. There was a minutes silence before kick off, possibly for Kyrece Francis, the 13-year-old nephew of former Wycombe player Lewis Cook, who died in an accident on the Thames in Marlow recently, such a tragedy when he had his whole life ahead of him. The game was spilt into 3 thirds, and there were quite a lot of goals as you will see below. I’ve done my best to get the goal scorers and timings correct, but it was tricky to spot what number some of them were wearing.

06: Marlow United take the lead after number 15 lobs the keeper, a chance made possible by a good through ball. (0-1)

13: Home side had a chance to equalise, but no one connected with number 9’s cross. They paid the price as number 15 gets his second with a low shot from close range. (0-2)

15: Number 16 scores with an angled shot into the bottom right-hand corner. It seems to be all one-way traffic, but Chalfont did have a chance towards the end, number 10 being unable to make contact with the ball when it was fed into him. (0-3)

47: Chalfont have actually seen some of the ball at the start of this second period, number 10 gets a goal back for them (1-5)

54: Keeper couldn’t keep out number 10’s powerful shot, the defender was unable to clear it off the line, and it’s getting embarrassing for Chalfont (1-6)

65: The best goal of the night, a wonderful curling shot from number 15, tight from the corner of the box. It goes in off the post and is worth the effort of going to the game for that goal alone (1-7)

78: The first time I have seen a team score 9, the ball was chipped over the keeper by number 9 into no man's land and he was left with an empty net to head in to. (1-9)

84: It looked like the home side were trying to wind the clock down to avoid the ignominy of double figures. It didn’t work, as number 13 slots in the loose ball, following another defensive mess, (1-10)

88: Number 14 finds himself in the clear, rounds the keeper to make it a thoroughly miserable evening for Chalfont Wasps.

Well, it’s taken me 1483 games to finally see double figures, the previous highest score coming in the mid 2000’a when AFC Wimbledon beat Cove 8-0 Marlow United were a league below their hosts too, though it was very much a squad game, with rolling substitutes. I’m not sure what to make of Chalfont, but one thing is for sure, Marlow United were mighty impressive and could have had 20. I’d back them to do well in the Reading Senior League next season. After the game, I drove home and was back within 20 minutes, having enjoyed seeing a bit of personal history made, I spent the rest of the evening digesting the figures and set about writing my blog, before watching TV and going to sleep. 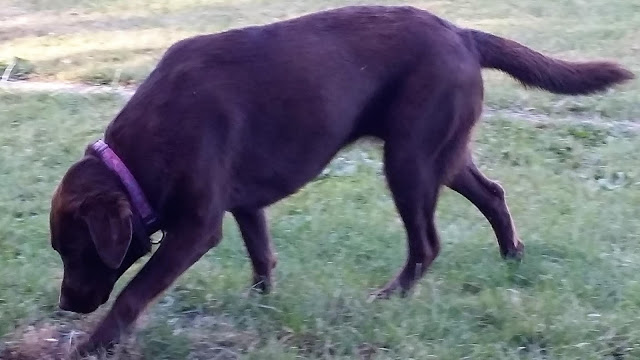 
THE NEST is a very basic ground, as is generally the case in the lower divisions of the Hellenic. The only area of cover is not a brilliant design, having the dugouts bang in front of it. Even so, it was a nice enough place to watch football on a sunny evening. There was a very nice modern bar with a basic range of drinks on and TV’s showing the sports channels too. Chalfont St Giles Village centre is nearby too. 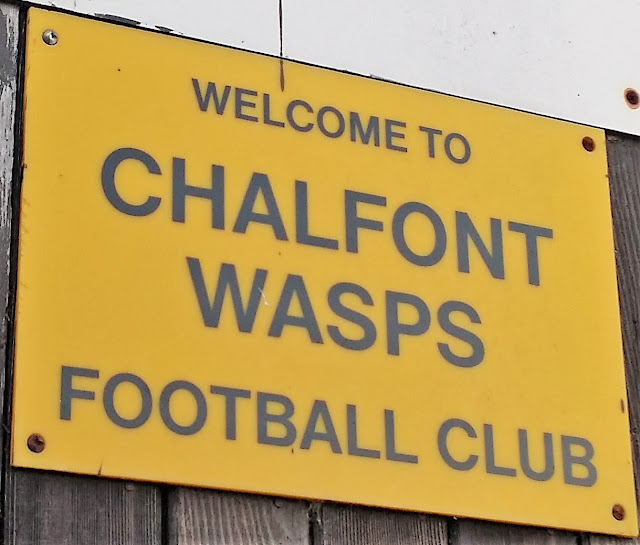 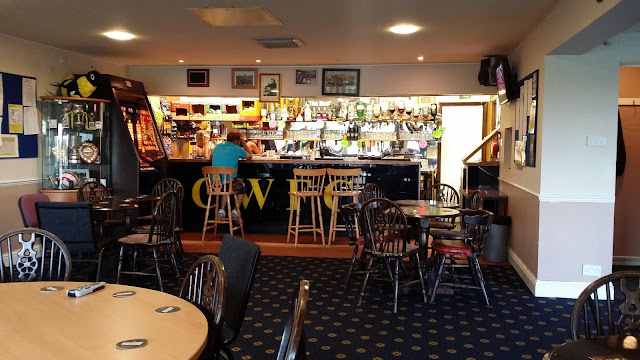 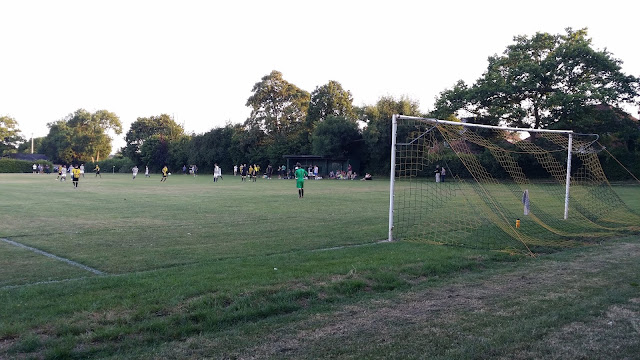 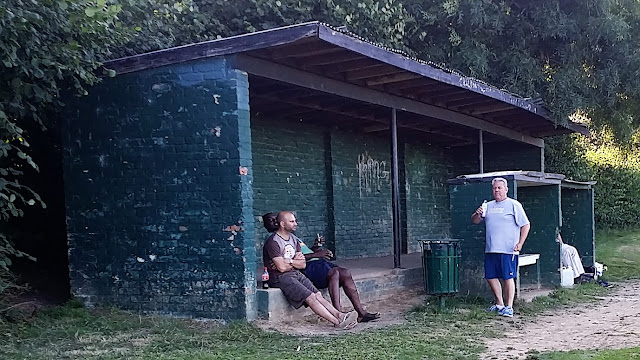 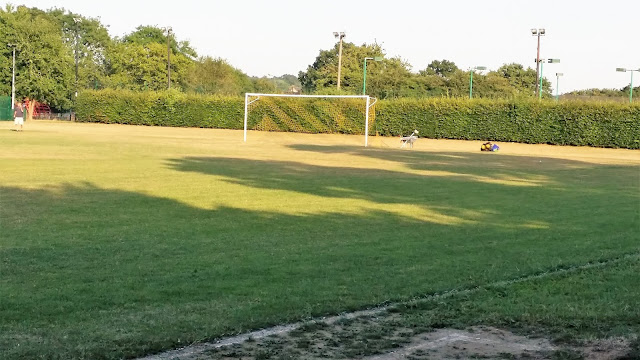 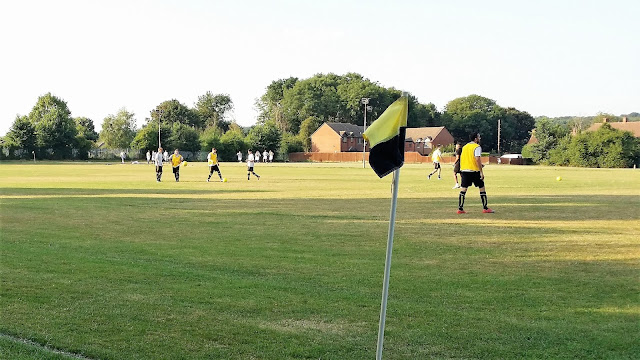 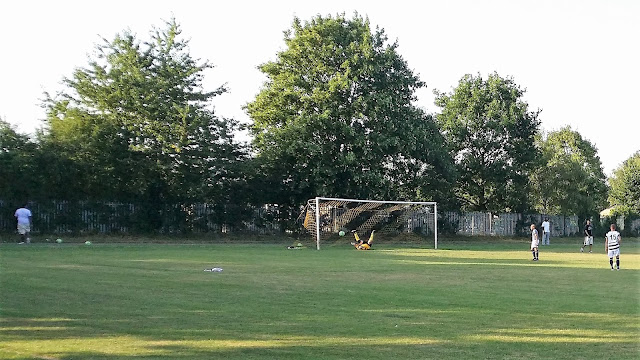