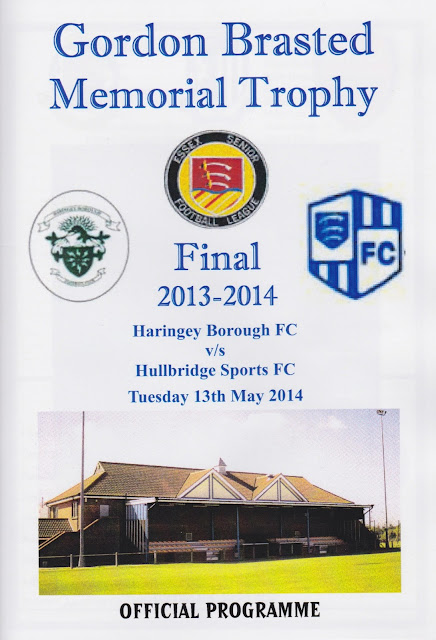 I hadn't seen Haringey Borough play before, but I had seen an Enfield 1893 FA Cup game at their ground back in August. The game was a dreadful 0-0 draw with London Tigers, but at least the ground was decent. The club itself was formed in 1973, initially playing in the Athenian League, then the Isthmian League for a few seasons in the 1980s, before switching to the Spartan League and remaining there until last seasons transfer to the Essex Senior League this season. Their best ever run in the FA Cup came in 1986 when they reached the 3rd Qualifying Round while in the FA Vase of 1978 they got to the Quarter Final before losing to Barton Rovers. They've not had a huge amount to shout about recently but as well as reaching the FA Cup 2nd Qualifying Round this season, they also finished runners up in the Essex Senior League to Great Wakering Rovers by just a point and of course reaching tonight's final.

I couldn't find a huge amount of information on Hullbridge Sports on the internet. They are a reasonably new club, having been formed just after the Second World War in 1945. Initially playing in local Southend Leagues, they joined the Essex Olympian League Division 2 at step 8 of non-league in 1984, winning promotion to their Division 1 at the first attempt. They were however relegated straight back. Despite this, the Essex Senior League at step 5 accepted their application to join in 1990. Despite them never looking like getting out of the league, they had a best finish of 6th in 1997/98. They have only ever reached the FA Cup Preliminary Round, the latest occasion being this season when they lost 3-0 to FC Clacton. As for the FA Vase, they reached the 2nd Round in 2010/11 before losing 5-1 to Leverstock Green. Their biggest attendance was 800 for an FA Youth Cup game against Blackburn Rovers in the 1999-2000 season, a great feat for such a minnow to get that far. I had seen them lose to Basildon United back in March and it had been a bit of a mixed bag of a game but had been a nice club to visit. They had gone up a couple of places since my visit, finishing a very respectable 9th place.

The game was to be played at Burnham Ramblers, who themselves had been in the Essex Senior League very recently, having been champions last season and gaining promotion to the Isthmian Division 1 North for the very first time, They had had a steady first season, finishing in 17th place and well clear of the relegation scrap. The town of Burnham on Crouch itself has quite a small population of 7500. Despite this is has 22 licensed drinking establishments and there is a twice a year pub crawl organised to raise money for the Samaritans which started in 2007.

While I was at the Spartan South Midlands Division 1 Final last week, I checked at half time for fixtures and they were very thin on the ground. The best I could find was one at Cradley Town's ground. It looked a decent venue, but really I'd have preferred to save it for one of their home games. It was also one I could do fairly easily on the train and combine with a trip into Birmingham, with cheap tickets too if I booked in advance. An opportunity to go elsewhere came when I looked at the Non-League Paper and that was the Gordon Brasted Memorial Trophy Final between the 2 Essex sides Haringey Borough and Hullbridge Sports.

I spent the morning lazing around and briefly considered going out for a jog first thing, that was until it started tipping it down. I was a bit worried that the match might no go ahead, but my Twitter correspondent Dan, who is the expert on all things about Essex non league football assured me that there would be no problems and that their pitch was 'like a carpet' As well as doing preparation work for this blog, I also watched some YouTube videos and TV before leaving at 3.30PM to pick up Anwar in Aylesbury. After leaving Aylesbury we stopped off at B&M Bargains to get stuff for the match, but we were soon on our way. It was a mixed journey with delays on the M25 and Southend Arterial road, around 30 minutes in all. But it was clear elsewhere and we got to the ground at 6.30. We walked into town which was about 20 minutes away. There wasn't a great deal of choice but I got myself a Saveloy and chips for £2.80 and walked back to the ground. 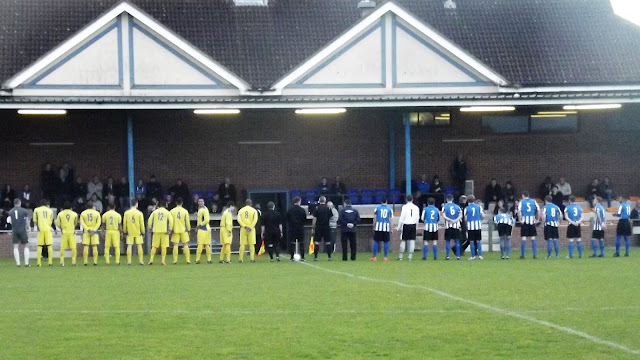 By the time we got back, it was around 7.20 so we went in and picked up a nice looking programme for £1.50. I read this, typed my blog and checked Facebook while I waited for the game to start. In the end, it didn't kick off till 8.05 due to Haringey Borough being caught in traffic. We chatted to a hopper I have seen about on Facebook called Jack about our favourite grounds.  The game started off quite open with chances for both side but we soon hit a lull. Hullbridge opened the scoring on 30 minutes when the ball was hit against the bar and the rebound was put in by number 11. On 40 minutes the Hullbridge keeper was forced into a great save to keep their lead intact, diving to his left to keep out a powerful shot. The second half was a bit less lively but Haringey were trying to get back into it. Hullbridge had a couple of chances too but neither keeper was seriously tested. In fact, on 80 minutes Hullbridge had the best chance so far. A great break from them found their striker one on one with the keeper but he could only shoot straight at him. And that was how it ended. I said goodbye to Jack and another groundhopper and we made our way home. After a slow start, thanks to winding roads and then an average speed check on the M25 we winged the last part of the journey and I dropped Anwar off at 11.35, before arriving home just before midnight. I watched TV for about an hour before going to sleep. 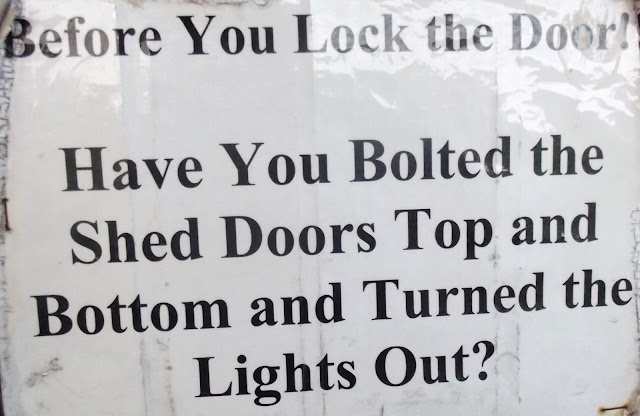 
LESLIE FIELD is a pretty smart non-league ground with a fair bit of character. Pride of place goes to the main stand which has a really nice design and holds around 200. Opposite is some cover holding just under that, while the rest of the ground is open. I didn't go to the tea bar or clubhouse. The town is a 20-minute walk away, where there are a small number of places to eat and drink. 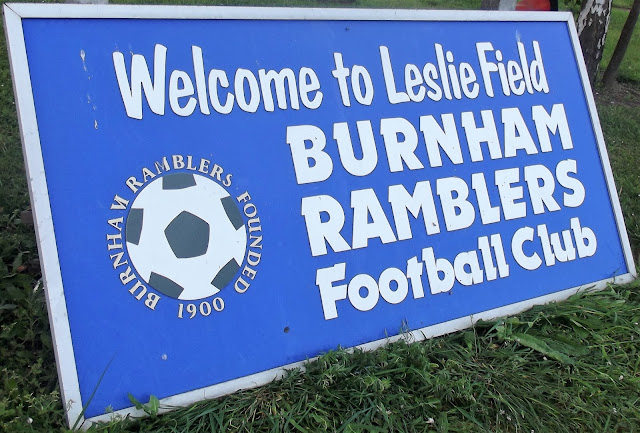 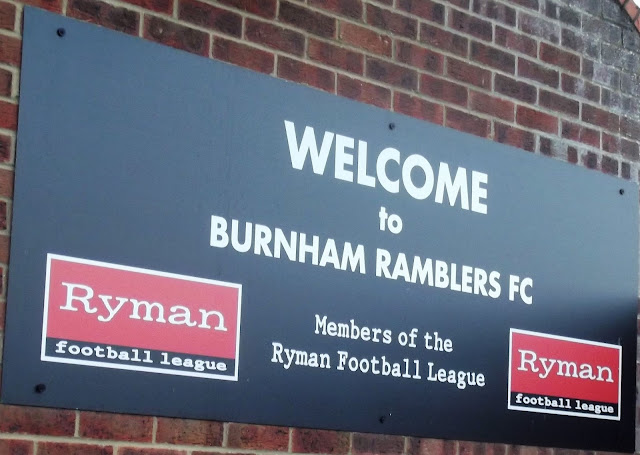 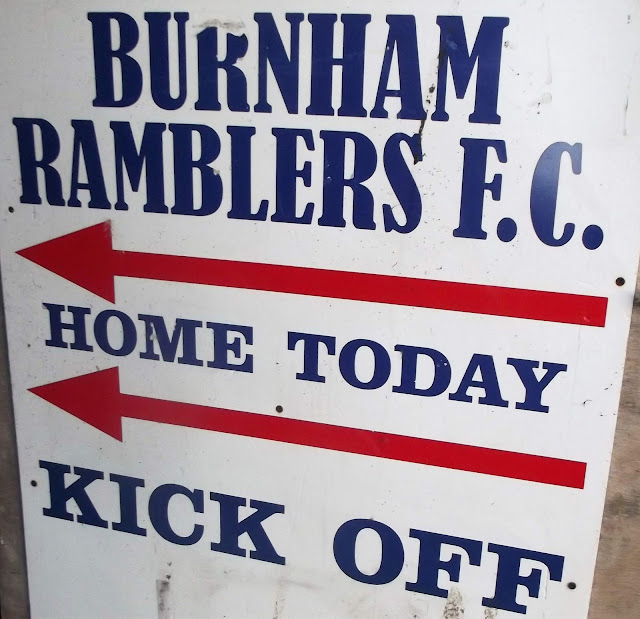 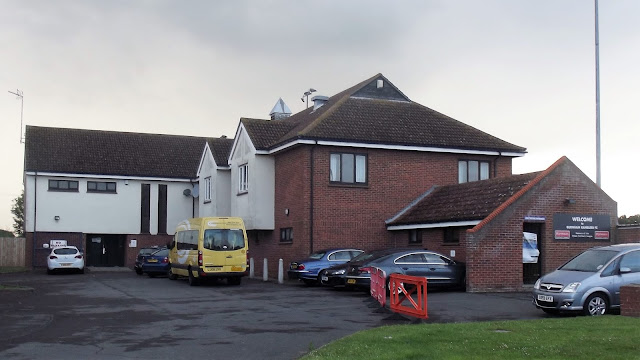 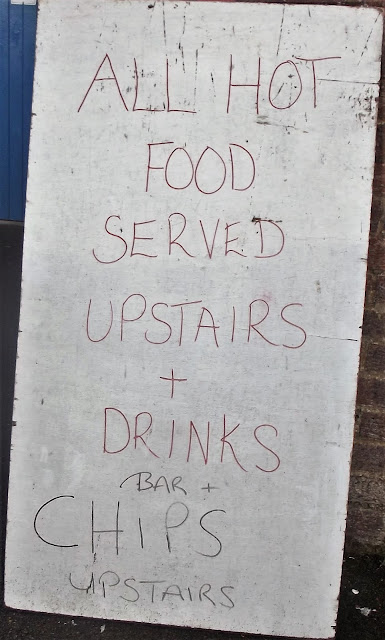 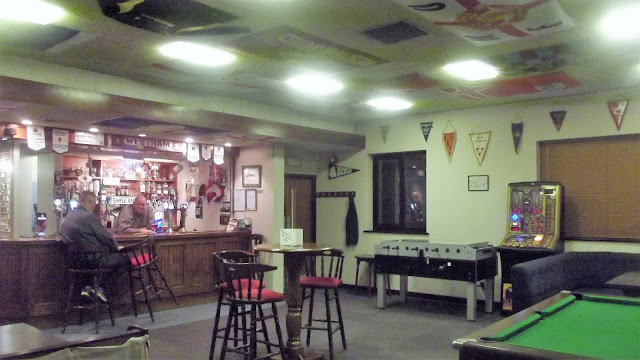 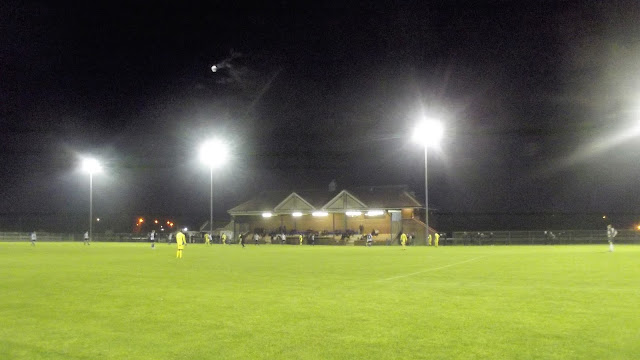 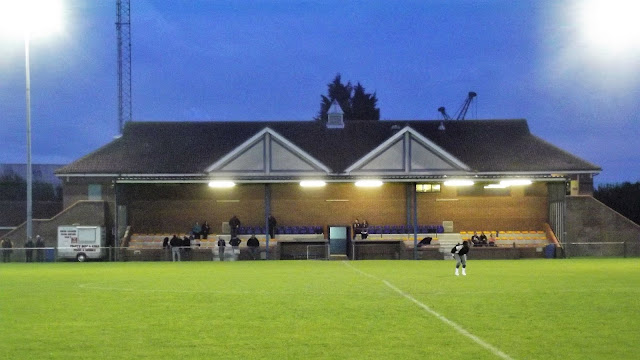 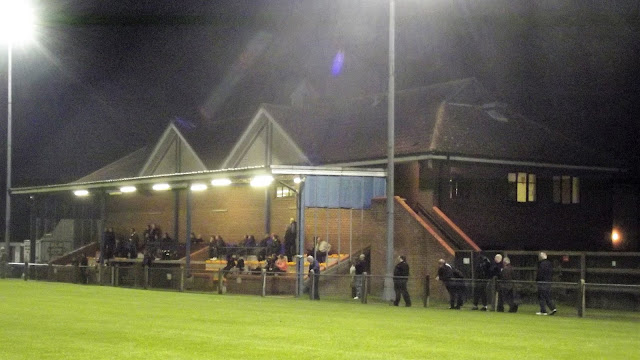 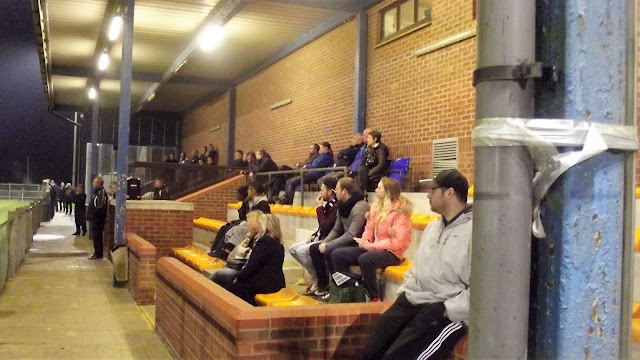 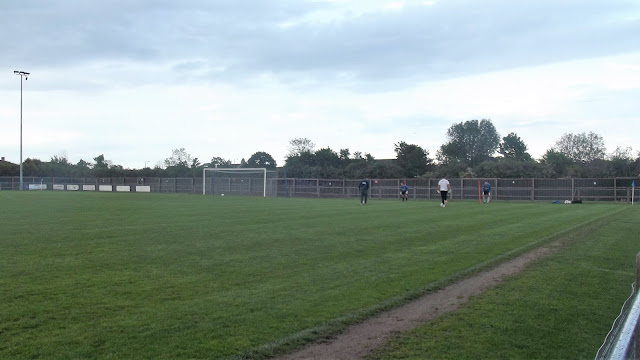 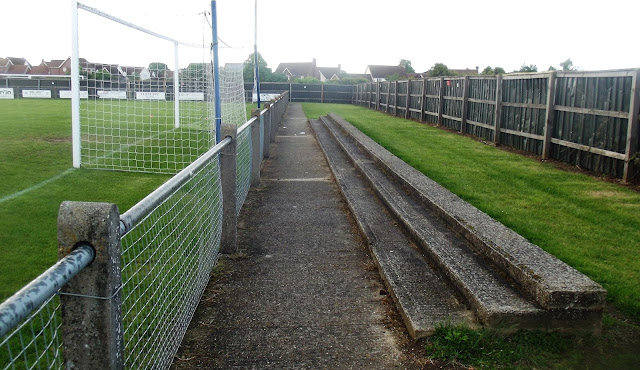 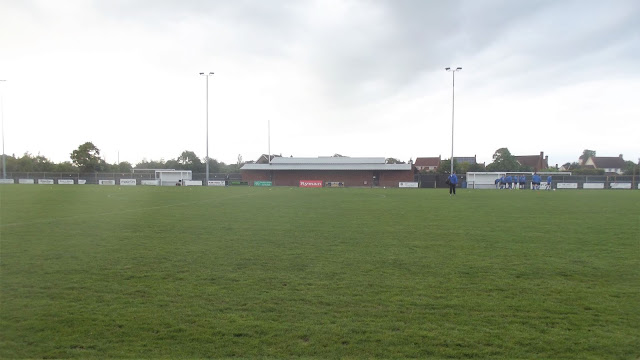 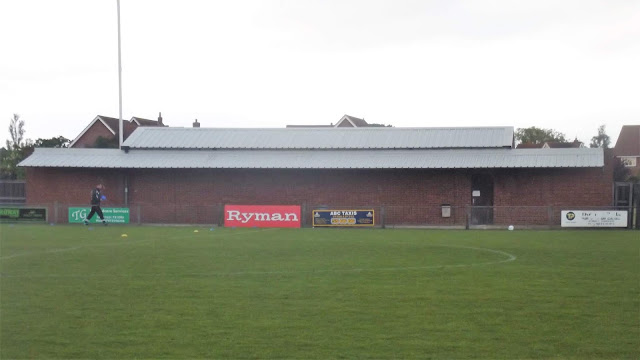 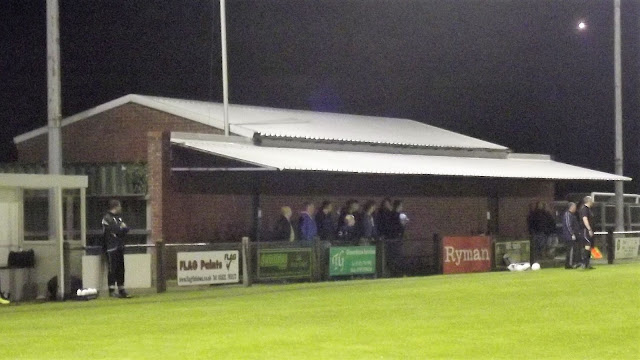 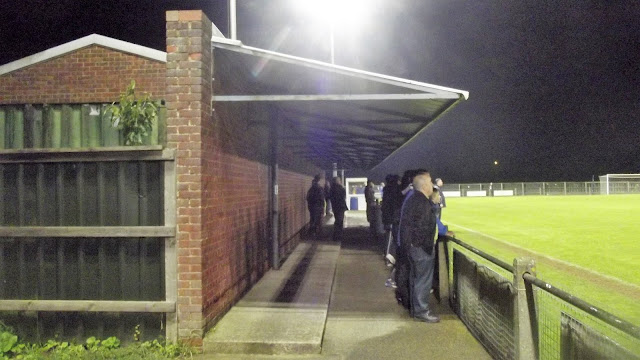 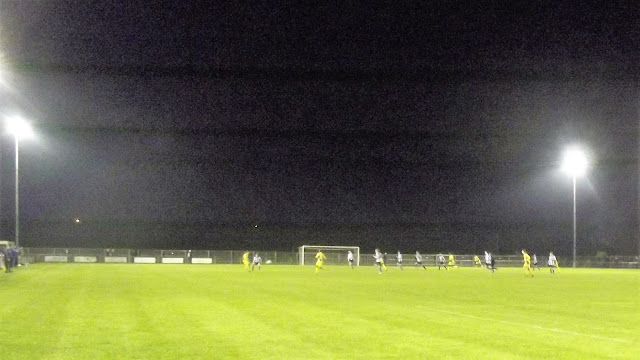