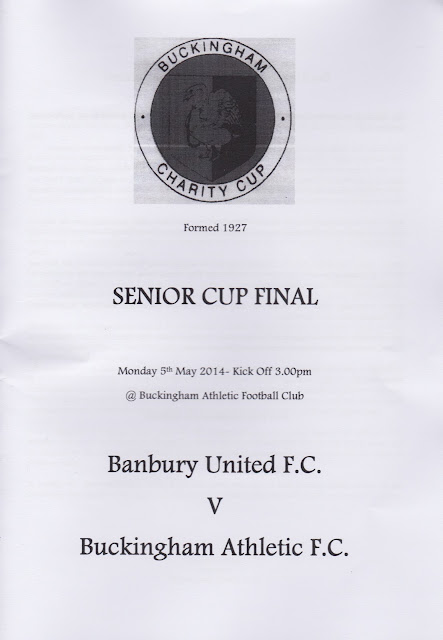 Buckingham Athletic FC was formed in 1933 as Buckingham Juniors but it was not until 1965 that they joined the Hellenic League. Initially joining the 1st Division, they won promotion to the Premier in 1969 and stayed there for 3 seasons before being relegated back down. They never really recovered from that and after 8 years of finishing rock bottom, they took the decision to drop down to the North Berks League. In 1985 they were in a batter place and joined the South Midlands League. They won the Division 1 at the first time of asking but had to wait until 1991 to win it again to gain promotion as their ground was not up to scratch first time round. However, in their league winning season, they built their stand and were able to make the step up. Floodlights followed in 1993 and since then they have alternated around the various Divisions of the Spartan South Midlands League, getting a best-ever finish of 5th in the Premier Division in 1997.  They have no history in FA Cup and the only time they won in the FA Vase was in their first season of entering in 1998 when they reached the second round. They have won a load of local cups, winning today's competition in 1970 and 1972.

The week since my last blog had been a mixed one. First off, on Thursday I travelled to Cockfosters v Holmer Green, hoping to see a game. But it was raining on and off all day and a torrential downpour for the hour before the game put played to any plans of seeing a game as the pitch was well and truly submerged. I then went around 10 miles to another game at London Colney, the pitch there was much better and had no surface water, but the referee decided to wait till 8.20 before deciding not to bother. Then on Saturday, Wycombe pulled off a miracle against all the odds and stayed up at Torquay in what was a great day out. 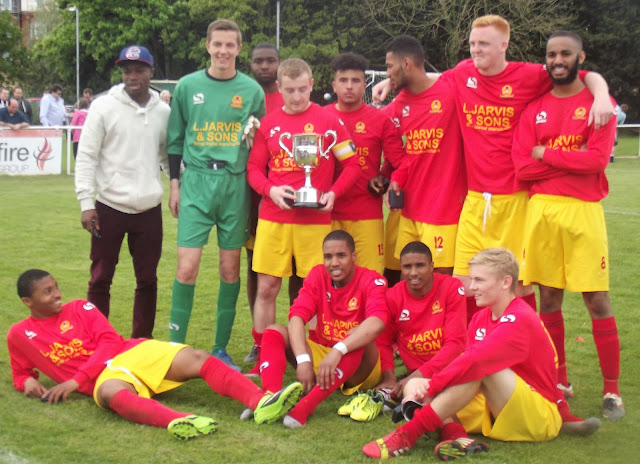 On the day of the game, there were a few options up for consideration. If I could get out of work on time I could go to the 11.30 kick off between Badshot Lea and Camberley Town which was being played at Ash United near Aldershot. Or take the rather long trip to Lowestoft Town v Hornchurch. But then when browsing the internet for Spartan South Midlands league fixtures (the league site had been offline for several days) I hit upon a forum called 'Non League UK' This informed me that there was a game even nearer at Buckingham Town and it was a Charity Cup final against Banbury United of the Southern Premier. I decided upon this as my destination as I could go home and have a bath and a bit of a chill before leaving and get back a lot sooner than I would if I ventured to deepest Suffolk. It was a bit annoying working on a bank holiday when everyone else was off but in the end, I finished at 11. Plus I got paid till 1 as per the terms of my contract. I went home, had a bath and started writing my blog for the game. I didn't have as long as I wanted though as I had to get lunch and had Chicken Balti before leaving at 1.25. On the way I stopped at B&M Bargains in Aylesbury to get some diet Irn Bru and After Eight sweets for the game. It wasn't too much further and after a steady journey, I got to the ground at 2.40. After parking up and paying £5 for entry and a programme and £1 for raffle tickets. I took some pictures of the ground and found a space along the side to watch the game from. 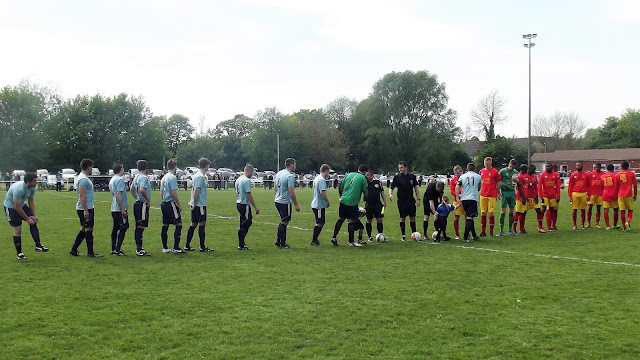 The game started off quite slowly, but Buckingham Town edged it. But after 20 minutes Buckingham opened the scoring when  their number 10 volleyed in from the left hand side. It was good technique and that was to prove the difference between the 2 sides as the afternoon progressed.  It was Buckingham Athletic on top in terms of play, but without the finesse in the final third to make it count. The score stayed the same at the break and at half time I went to get some pictures of the bar and a pint of Somersby Cider which will be my last until nest weekend. I returned to the pitch just as the 2 teams came out for the restart. It took until the hour mark for Buckingham to get their deserved equaliser. A corner was put in and Adam Bone poked it home. But almost straight away Banbury went up the other end and regained the lead. It was another good goal, the number 4 running up the right-hand side, cutting inside and firing into the bottom right-hand corner. By now the game had picked up to a really good pace and Josh Hooper equalised for the hosts on 84 minutes when the keeper parried the initial shot but the rebound was headed in. They even had a chance to win it and prevent extra time but the gilt-edged chance was missed. So into extra time it was and I was pleased as I was enjoying the game. I was hoping for a penalty shoot-out as it's always a good watch. Buckingham Athletic took the lead for the first and only time on 97 minutes when Glen Hawkins caught the Banbury keeper out of position and capitalised on the error lobbing over him into an empty net. It was all square on 103 minutes when the visitors got the equaliser as the Buckingham keeper couldn't get enough on the shot to keep it out. He should have done better on the 4th too when he failed to gather a cross and the loose ball was put in. I was hoping for an equaliser so that we could get a penalty shoot out, but I did at least see one after a foul in the area, right at the death. There was a bit of argy-bargy after it for a minute or so but in the end the Banbury striker picked up the ball and dispatched the penalty to make it 5-3 and put the tie beyond doubt. It had been a really good game in the end and instead of rushing off I stayed behind and watched the presentations and got a picture of Banbury United lifting the cup. This was the 5th time out of the last 6 that they had won the Buckingham Charity Cup and their team were well pleased. After the game I drove home, getting home about 6.40 and seeing my Mum and Dad after they had been down in Torquay for the weekend. I typed this blog up and watched TV, happy in the knowledge that I had a day off the following day.

STRATFORD FIELDS is set amongst pleasant greenery and in common with most grounds at this level has just the one stand. This for a change is a proper stand rather than a Meccano job and the view from it is decent, even with supporting pillars. The capacity is around 100 sitting, with space for around another 70 stood behind. The rest of the ground is open standing but that's no problem on a sunny day like today. The bar is nice and smart with a reasonable range of drinks at fair prices. They have Sky too. They had a decent tea bar, though I think that was bought in for the occasion, so I'm not sure what they do normally, I didn't see the town, but it was signposted so it can't be far away. 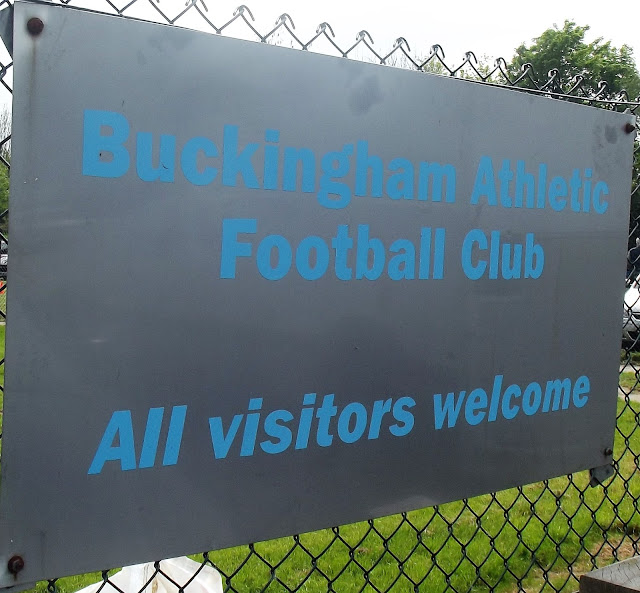 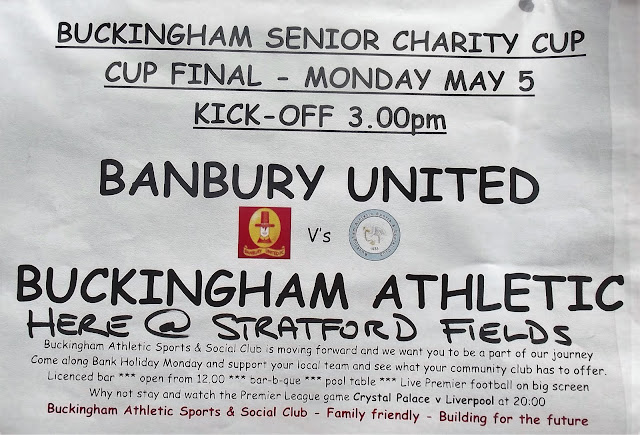 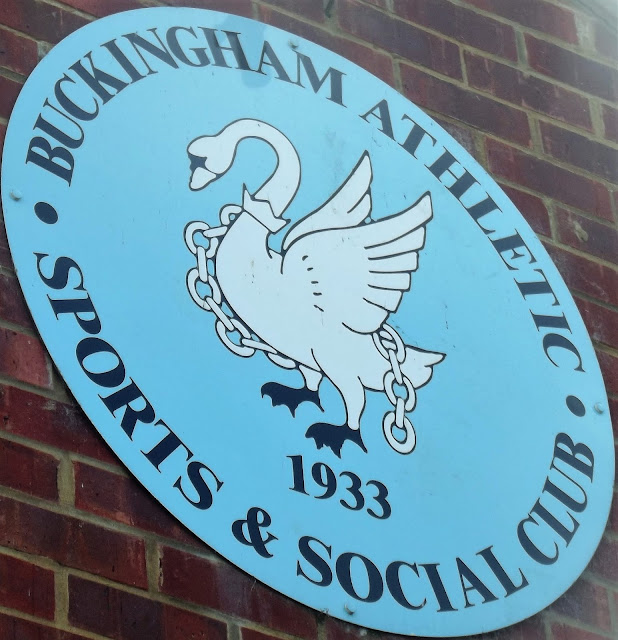 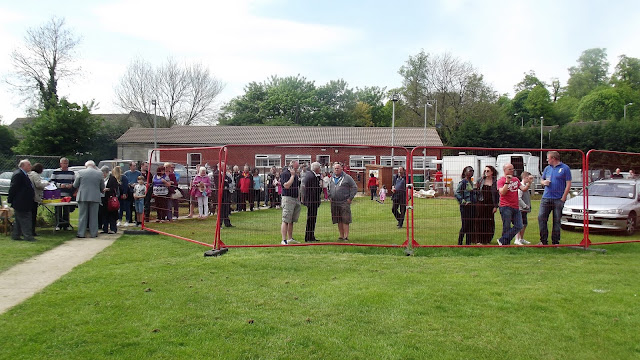 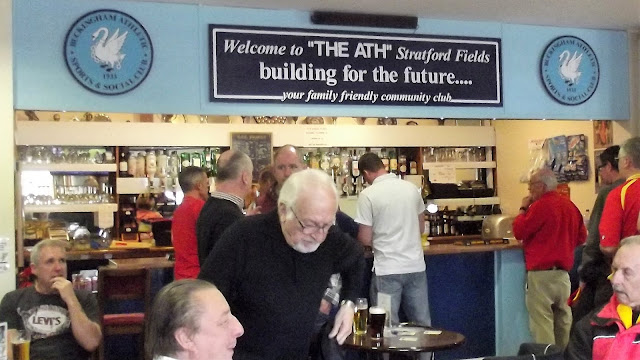 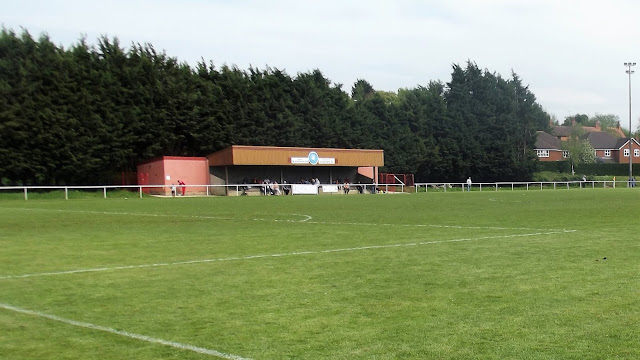 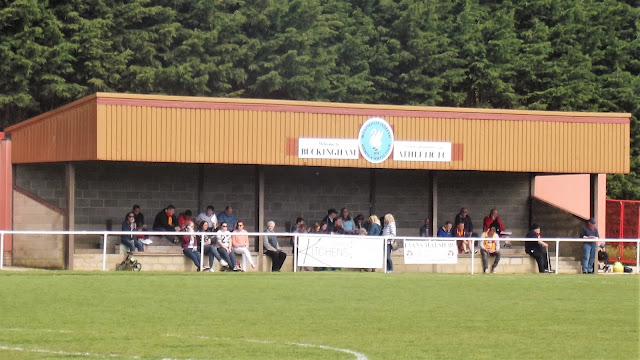 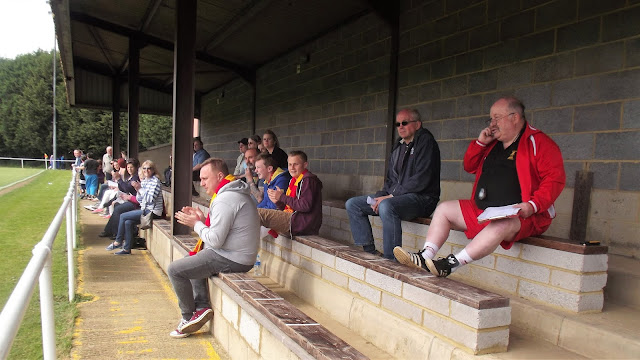 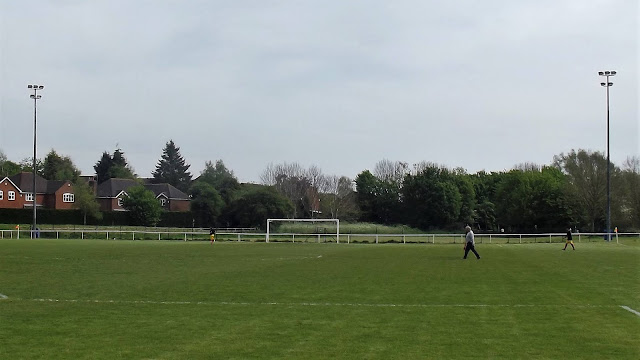 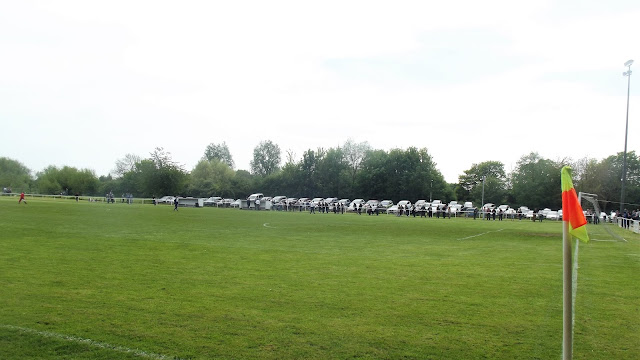 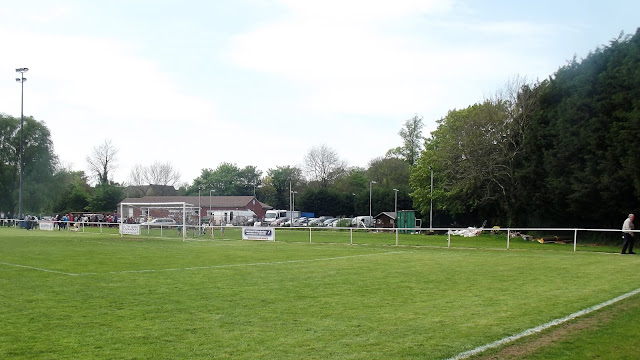 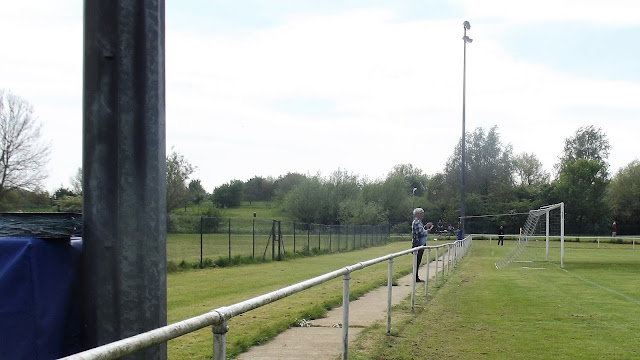