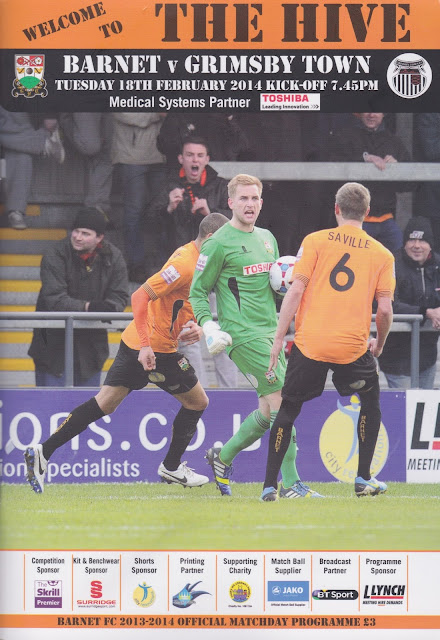 I have plenty of history of watching both teams and they have plenty of connections with my own team Wycombe. The shortest of the 2 is Grimsby Town. Our record against the Mariners is pretty decent, winning 7, drawing 7 and losing 2. I went to most of these - the bulk of my 7 years not missing a home or away game for Wycombe was when Grimsby followed us around the bottom 2 divisions. I missed the most famous of these wins though. Back in 2001, we got past the FA Cup 3rd Round for the first and only time in our history. This was the year that we reached the semi-final against Liverpool, narrowly losing 2-1 at Villa Park. Grimsby would have been firm favourites, being a division above after the initial tie was drawn 1-1 at Adams Park. But Lawrie Sanchez's charges had different ideas and not for the last time that season they upset the form book, winning 3-1 up at Blundell Park. Since the last time the 2 sides had met in 2009, social media had evolved a great deal and I had met several great people from up that way, so after initially not missing Grimsby that much from our annual fixtures, I was now keen to have them back in League 2 as soon as possible.

Barnet had a much longer history of the Chairboys, stretching right back to our non-league days. The record was pretty even with the 44 meetings providing 16 wins apiece with 12 draws. 2 unwanted stats will haunt Wycombe fans. They failed to win at Underhill, the Bees old home for 24 years between 1987 and 2011. And although the record at home was a bit more fruitful, we had to suffer the ignominy of a 7-0 home defeat in September 1987, as we struggled in the Conference. I started following Wycombe just under 4 years later and had to wait a couple of years before my first clash between the sides, a 1-0 victory in the Autoglass Trophy in the Autumn of 1993. Over the games between the 2 sides, there weren't many memorable ties although there were several players that played for both sides. Probably most notably Sean Devine who signed towards the end of the 1998-99 season and scored a fair few goals to help keep Wycombe in the third tier by the skin of their teeth. Wycombe were also Barnet's last opponents for a competitive game at their old ground, Underhill and luckily I got the opportunity for some decent photos from around the ground.

At the start of the season, I only had 3 grounds left to do in the Conference. I had decided that if possible, I wanted to do them with Grimsby Town, as I know plenty of great people up there that are a pleasure to spend time with. I'd accomplished the first one, Hyde, back in August and a great day had been had. I'd met the lads again at the derby between Cleethorpes Town and Grimsby Borough back in mid-November, also making a few new mates there too. And at the end of that month, I went and saw Grimsby at Coalville Town on the first leg of their FA Trophy adventure, which will hopefully end at Wembley in March. To achieve that however, they will have to overturn a 2-1 defeat to Cambridge in the second leg of their semi-final on Saturday. 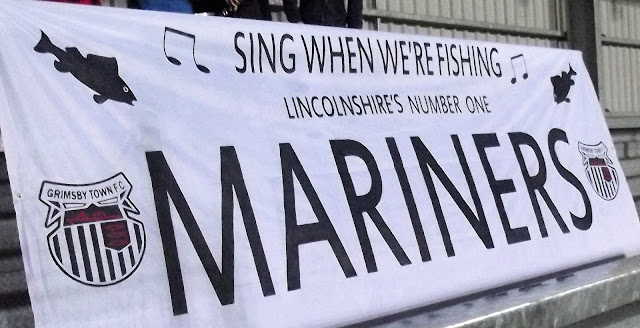 On the day I was on my day off and decided to get my hair cut, quite appropriate considering I was off to Barnet later. I also filled my car up with diesel and spent the rest of the day chilling before leaving at 5.15. I had made sure I had booked tickets before leaving and had printed them out as they were offering no concessions on the day. Also despite offering Quid a Kid for home fans, they were not offering it for away fans as well. Wycombe used to use this shoddy practice under their old ownership, but since the supporters trust took over, this dubious approach has been kicked into the long grass. I'm a firm advocate of treating fans equally, which is why I like the lower reaches of non-league so much more, without the segregation and over zealous stewarding that you sometimes encounter in League football. 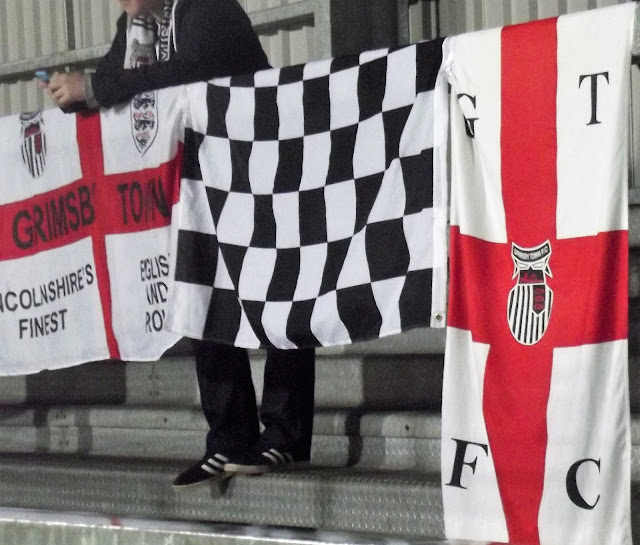 I left home at 5.15 after having a Levi Roots meal for my dinner. Despite it being rush hour and having to travel across London, delays were minimal and I arrived in a side street near Barnet's ground around an hour later. I checked Facebook and posted an update while I was still in my car and then made my way down to the ground. I got some pictures of the outside of the ground and had a look in the club shop, buying a programme. I then went and waited by the away end and only had to wait a few minutes for the supporters coach to arrive at 6.45. On it that I knew were William (who I have met several times before and the one who I probably know best out of all the Grimsby lads) Kieran (who I met at Cleethorpes Town v Grimsby Borough last November) and Aaron who I also met briefly that day. Plus a couple of newbies - Rob - Aaron's brother and Louis, who I had known on Facebook for a while but not really chatted to much.I'd already got William his ticket to save him paying extra on the night but the rest of the group had to go and collect theirs from the club shop. Soon enough everyone was ready to go in and so we watched the Grimsby players warming up and got a few photos. Aaron was especially excited to get one with his favourite player Sam Hatton and he didn't stop smiling for the rest of the night. 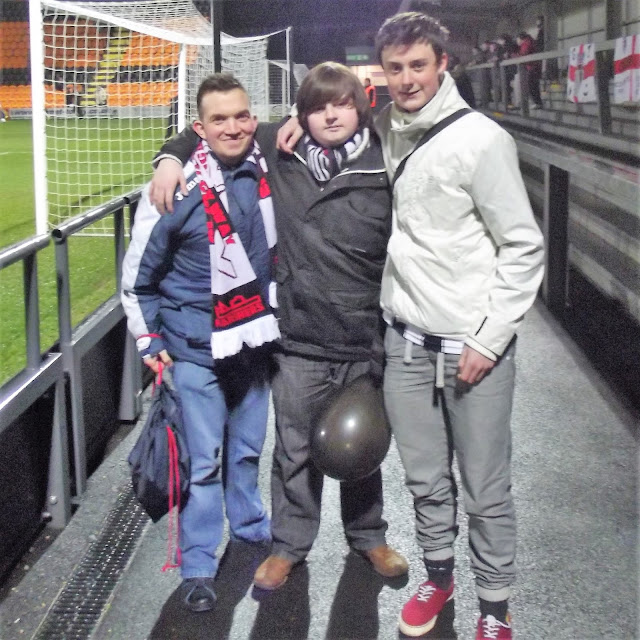 The game didn't start on a great note for Grimsby. Only 2 minutes had elapsed when Mauro Vilhete, one of the shortest players on the pitch, headed in from a corner. It was nearly 2-0 on 5 minutes as Daniel Lopez broke clear but smashed his shot against the post with Mariners keeper James McKeown just doing enough to put him off. The next half hour Barnet were on top with the Mariners unable to impose themselves on the game. However, the last 10 was all Grimsby with a succession of well-delivered corners causing problems and leaving the home side on the back foot. It continued that way after the break but it took until the hour for parity to be restored. It came as Craig Disley's looping header found it's way past Jupp in the Barnet goal. Grimsby pushed and pushed for the winner with Barnet having the occasional breakaway. Sadly for the 343 Grimsby fans who had made the long trip down one of these rare forays paid off. Andy Yiadom crossed and former Wycombe transfer target Jake Hyde was left with a simple finish. Grimsby had a couple of chances in the dying embers of the game but couldn't equalise for the second time. Grimsby fans and their team deserved better. 343 is a great number to bring down on a Tuesday night for a Conference club, around 200 miles. I looked in the programme and it was the 3rd biggest support, only being beaten by Luton and Cambridge which were both on Saturdays and far nearer. I said goodbye to the lads and made my way back to where I had parked. Again it was an easy drive home and I got back at 10.45. I had a quick look on the internet and watched some TV in bed. I was hoping for a decent nights sleep but didn't get much at all, only a couple of hours at most despite wanting more. 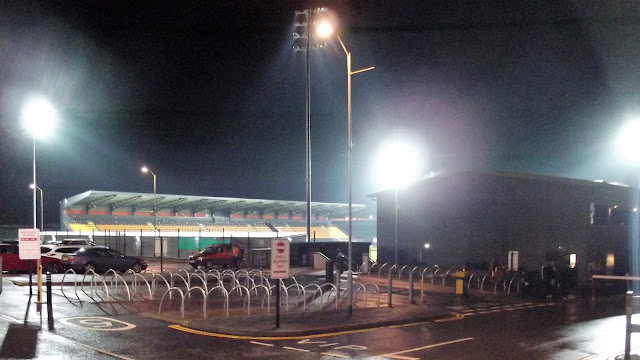 THE HIVE is very much a temporary venue, with Barnet planning to move back to their own borough if the local council ever do the decent thing and give their team the support it deserves. Originally this was earmarked to be a stadium for Wealdstone FC but due to financial constraints, one thing led to another and they now play in Ruislip. So pretty much every stand is designed so it can be taken away to another site if needs be. Away fans are primarily housed in the North Terrace which holds 871 supporters. It's matched by an identical terrace at the other end. Despite both of these being metal terraces they offer reasonable views and you can get a good atmosphere going under them. Away fans are also given 350 seats out of the 2700 capacity West Stand, which is by far the biggest stand in the ground. Completing the set is the East Stand, which also houses the bar and changing rooms. but only 750 seats.

The away fans are given their own bar and tea bar, and although I tried neither, the bar looked very good. Rather than some draughty concourse like some other grounds this was a place you could actually sit inside and have a drink in the warm. The club shop is pretty much the same temporary one as they had at Underhill with a decent range of merchandise but no old programmes. Bargain of the day (if you are a Bees fan) were sweaters reduced to just £2 each. There were a few other food and drink places within walking distance if you wanted more variety. Overall I enjoyed my night at Barnet. They have always been a good day out at their old place and this has continued at their new home with friendly and relaxed stewards and decent home fans, even if they weren't that vocal on the night. The programme is also one of the better I have seen with plenty to read for both sets of fans and it's well presented. 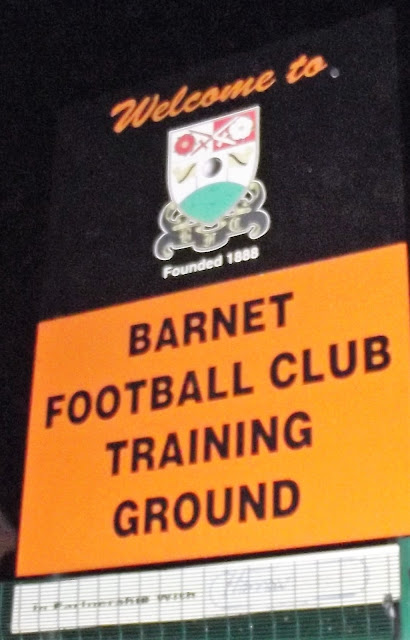 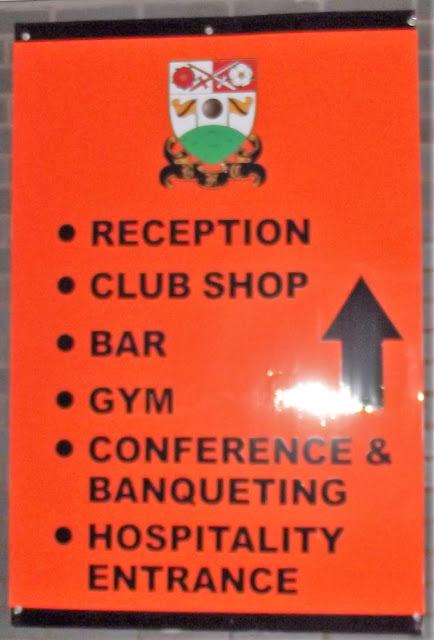 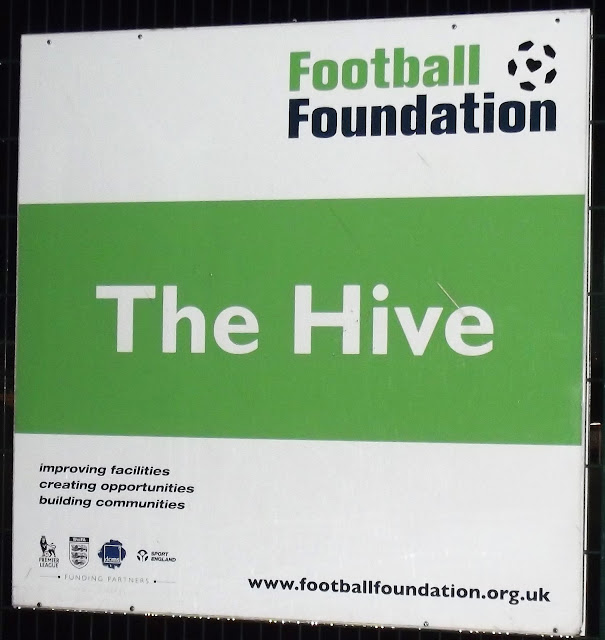 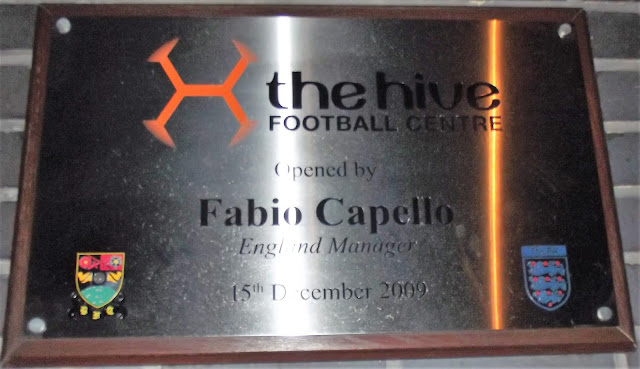 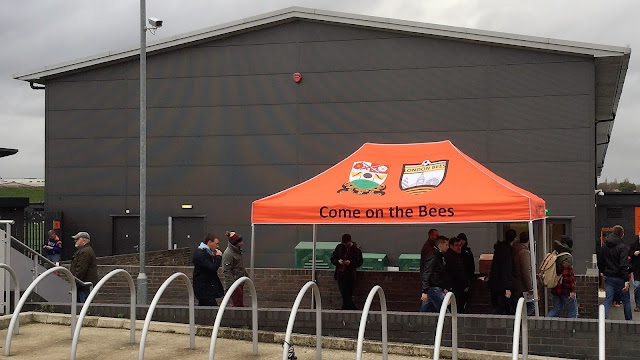 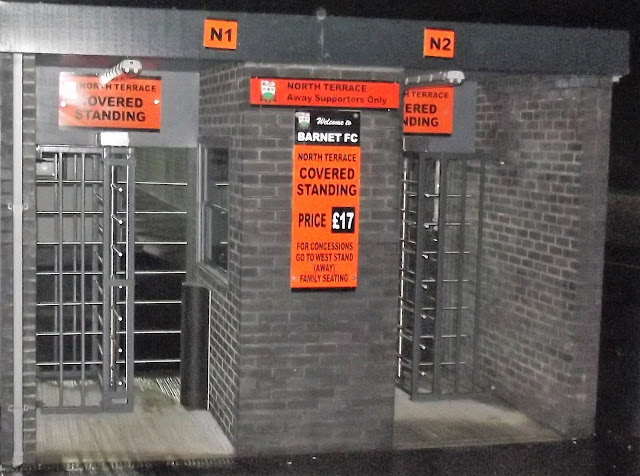 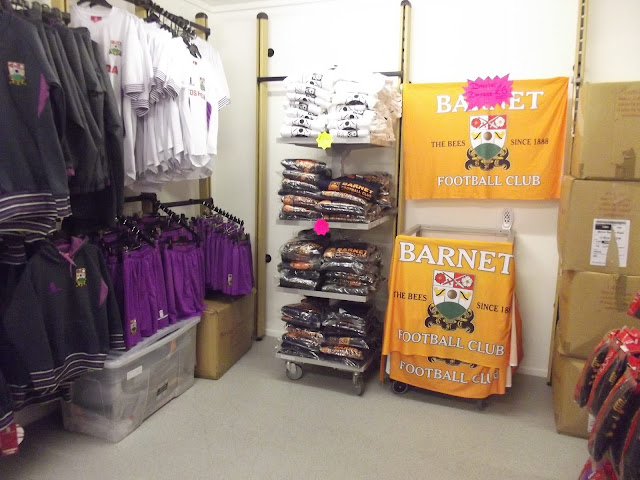 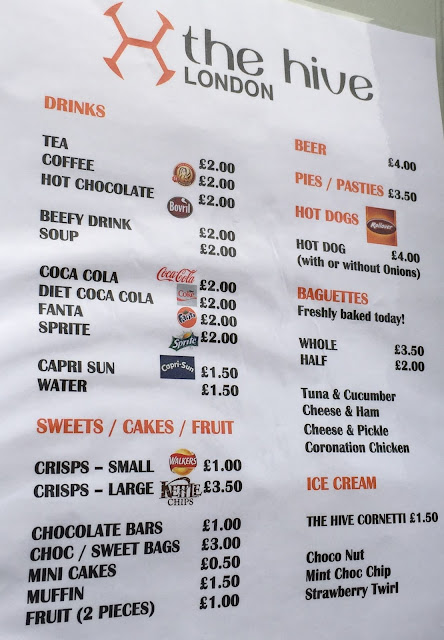 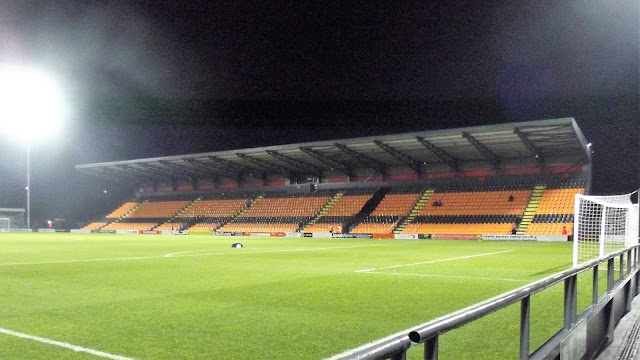 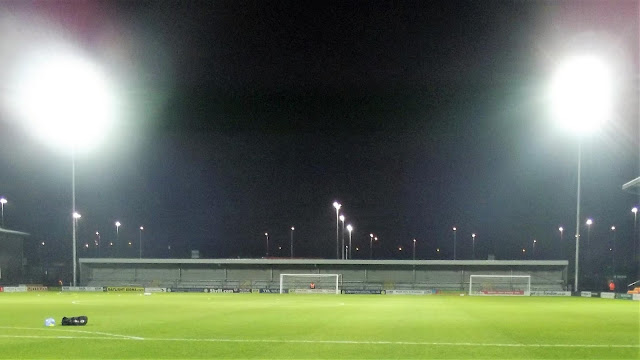 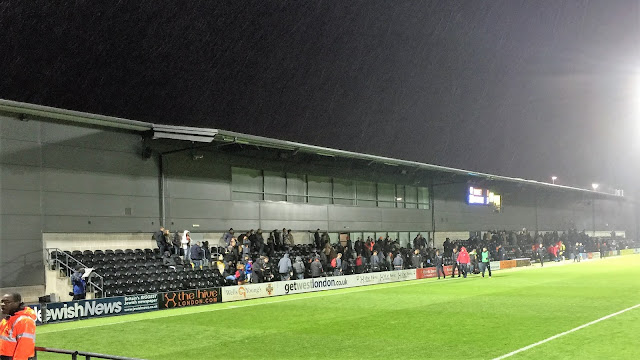 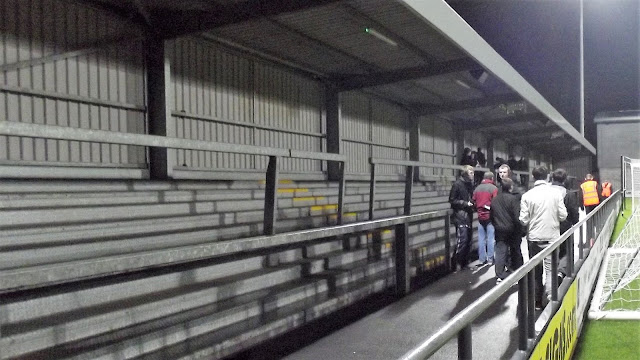