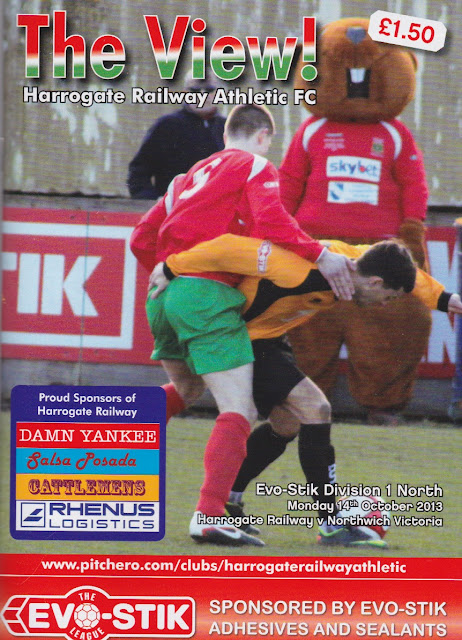 As part of my week off from work I was planning a week up north, with a few football games thrown in for good measure. I had everything planned to a tee, with all my games planned in. I also had a pub crawl in Huddersfield planned and had booked a hotel near to Huddersfield town centre for this purpose. However, upon checking the Non-League paper on Sunday before I was due to leave, these plans were thrown into disarray. I was planning to go to Ossett Albion v Mossley, a simple train and bus ride away. But I hadn't banked on them changing it for the crunch England game for the World Cup, at home to Poland. It was a good job I checked, as it would have been a wasted journey otherwise, but it was annoying all the same.

One trip that would remain however was the Monday night game in Yorkshire - Harrogate Railway v Northwich Victoria. The home side were most well known for a couple of FA Cup runs back in the early 2000's where they had given good accounts of themselves. Firstly in 2002/03, still as an NCEL club they won through 8 games before losing 3-1 to Bristol City in front of a capacity home crowd. Things should have got better after that, but they found themselves bottom of the league around a year later. A change of manager did the trick and a couple of seasons later they gained promotion to the Northern Premier League. Another FA Cup run followed, this time reaching the second round before a narrow 3-2 defeat to Mansfield, live in front of the BBC Cameras. They have remained in the NPL D1 North to date and sat in 17th place at the start of play.

The visitors Northwich Victoria have an interesting and chequered history. For the 2 seasons that I watched Wycombe in the Conference, Northwich were there and more than held their own. In fact, they gave me my first major disappointment in football when they beat us 3-2 in the Conference League Cup final, then branded the Drinkwise Cup. We had won the league a week earlier and were looking for our another trophy, prior to our FA Trophy Final a few weeks later. But Northwich and Gordon Davies didn't read the script as he scored a hat trick to give them an excellent victory. I don't have the programme from that at present, though it was a 2 legged affair and I have the programme from the goalless first leg, though sadly I didn't attend, as it was far too far away for a young schoolboy on a midweek night. I was delighted a few months later, when we signed their best player Tony Hemmings. He did pretty well for us, with a dazzling debut up at Bury where he scored and set up a goal after coming on as a substitute if I remember correctly.

Since then, they had remained in the Conference until the 2004-05 season. After finishing in a relegation spot the season before, they were saved by Telford United going bust and Hucknall Town's ground not being up to the standard required for promotion. However, the boot was on the other foot the following season. Despite a 10 point deduction for entering administration, they were still in a safe position come May. But more financial issues were found and they took a voluntary relegation to avoid being demoted to the regional divisions at step 5. They appeared to be over their problems. The following season they were Conference North Champions and reached the FA Cup 3rd Round.

The wolves were never far from the door though and in 2007 they tried to enter administration again and the club was put up for sale. Current chairman Jim Rushe was part of a consortium that bought the club. Since then, things have not improved. Despite another cup run, where they beat former Premiership team Charlton Athletic they have been in administration yet again. As well as that, more financial issues have led to them being expelled from leagues and that is how they currently find themselves at a low level by their standards. They have had ground problems too. After leaving their home of many years, they shared at Witton Albion before getting a brand spanking new stadium which was amongst the best in non-league. It was so good, Manchester United based their reserves there. Yet more financial problems led to them losing this ground though, with part of it going to the local chemicals factory adjacent to the ground. They now share at North West Counties side Flixton.

The man at the centre of this is controversial owner Jim Rushe. This has led to disgruntled fans setting up a breakaway side called 1874 Northwich and taking a large chunk of support with them. They play at Winsford United's ground and are a couple of divisions lower in the North West Counties League Division 1. The demise of the club is sad, they can't even play in or near their hometown as an uneasy relationship with the town's other team, Witton Albion means a groundshare is unlikely. I think I have only scratched the surface of the story here, and I've already written far more than I have for any other team on this blog.

On the day I left earlier than planned at around 12.30. I had a few football grounds in Leicestershire and Nottingham that I wanted to visit and despite quite a lot of slow moving traffic, I managed to get these done. Probably the pick of the bunch was at Ellistown, near Coalville, probably as it was one of the 2 that I actually managed to get inside, even if it did mean climbing over a big wall. I also went to Basford United, Radford, and Gedling Miners Welfare. When I got to Gedling, I realised that I'd done it before, but somehow not recorded it down. I did at least get some better pictures of it, however, so it wasn't all in vain. It was nearly half four before all these were done and so I set my sat nav for Knaresborough and was reminded of how far it was. I was originally planning to visit Knaresborough Town FC but I didn't get there as early as I hoped and ended up going straight to the pub. In the end, I probably could have squeezed it in, but there will be plenty of other chances to go there I guess.

The Mitre Inn was excellent and I was pleased to find that both ciders that I had not tried were both in small enough bottles that I could try both and still be safe to drive the short distance to the game after. I had one from New York called Original Sin and one called Autumn Magic from my favourite cider maker in Wales. The food was fantastic too - I had a homemade burger and it was absolutely brilliant, the best burger I have ever had. After a short drive to the ground, I got there at 7.15 and parked up in a nearby street. I met a Northwich fan who had seen my posts on Twitter and also a home fan who was most surprised to see a Wycombe fan at the game.I also met a guy called John who is part of a lot of the groups I go on. Best of all, I met longtime Facebook friend Ben who turned out to be every bit as fantastic in real life as he was online. He supports Doncaster Rovers, and sadly (for Wycombe at least) we have not played in the same league for some time. There was a League Cup game in 2006, but you have to go back to 1993/94 for when there was last a league encounter between the 2 sides.

Much amusement was found in the Harrogate PA announcer who took real enthusiasm in reading out the teams with such gems as 'Performing Miracles in front of Goal, number 9, Jesus Martin-Farina' it as him and several others at the game that reminded me of why I love non-league so much. The game itself was pretty decent and there was sad that there were only 85 people there to see it as it deserved more. Harrogate Railway scored with their first real chance of the game as Jesus Martin-Farina headed in unmarked from a decent cross. From then on till half time, Northwich had the lions share of the play but were unable to get any closer to scoring than when they hit the bar. The onslaught continued into the second half and Harrogate Railway were performing heroics to keep Northwich out. Keeper Peter Crookes made several good saves and there were plenty of shots cleared off the line. The equaliser arrived on 59 minutes when Gary Burnett powered the ball into the top corner of the net from close range. Northwich continued to dominate, and it looked as if there was only going to be one winner. However, in the last minute, a cracking goal from the substitute Lawrence Hunter won the game for the home side when the ball flew in the top corner from outside the area. Harsh on Northwich, but I was pleased for Harrogate Railway who had been good hosts and made it an enjoyable visit to their home.

After the game, I said my goodbyes to Ben who had been great company throughout the evening. I was in rush to get back to my hotel and hit town given that I might have to take it easy and drive the following day. I was not amused when I found out that a road was closed and that I would have to add 15 minutes to my journey. After much slow traffic, I was back at the hotel, had thrown my bags in my room And was off and out by 11. I went to the Huddersfield CAMRA cider pub of the year and tried a couple of new ones before walking back to my hotel. I wished I could have tried more but only had limited time. In any case, it had been a great night and a decent start to my week away.


STATION VIEW is a fairly basic non-league ground but is more than enough for Harrogate Railway's needs. Unusually the main stand is behind the goal and holds around 200. There is further seating for about 100 in a small stand between the dugouts but apart from that, it's open standing. There is a club shop selling a small range of souvenirs and old programmes too. There is also a bar and a tea bar but I didn't use either. There are some takeaways nearby but I would recommend hopping on a train or driving to Knaresborough where the Mitre Pub is excellent and right outside the station. Or if you fancy a walk, it's under 2 miles which is fine if you have time to spare.

I'd certainly recommend a visit here. As well as being friendly, it's great value with an adult paying just £5 to get in. There is also a glossy programme with lots of content for just £1.50. From my experience, both are a lot cheaper and better value than most in this league or at this level. 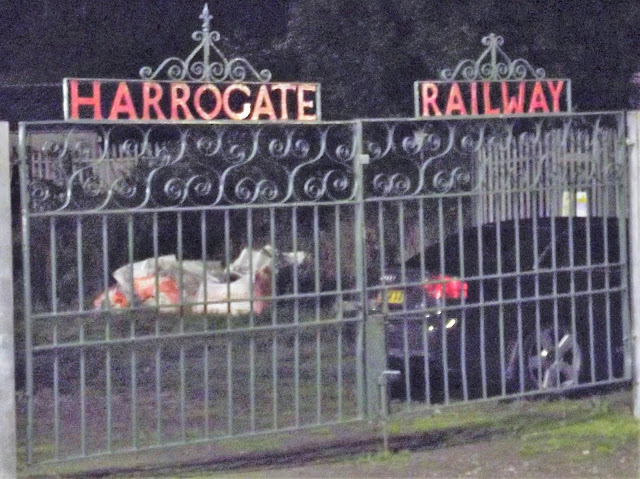 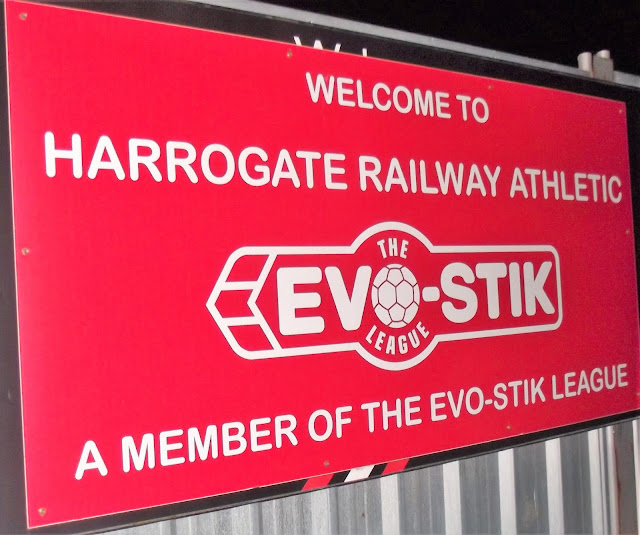 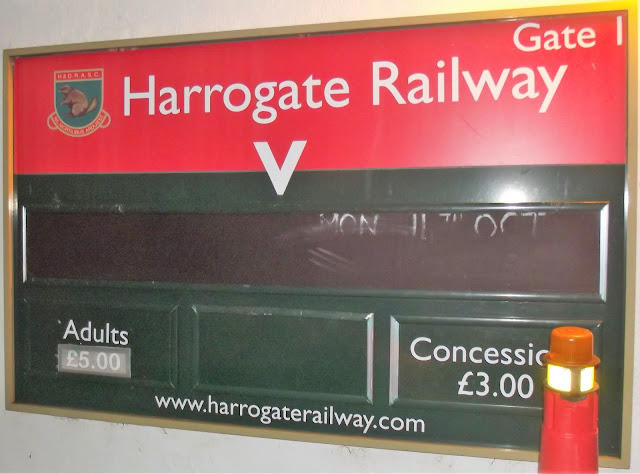 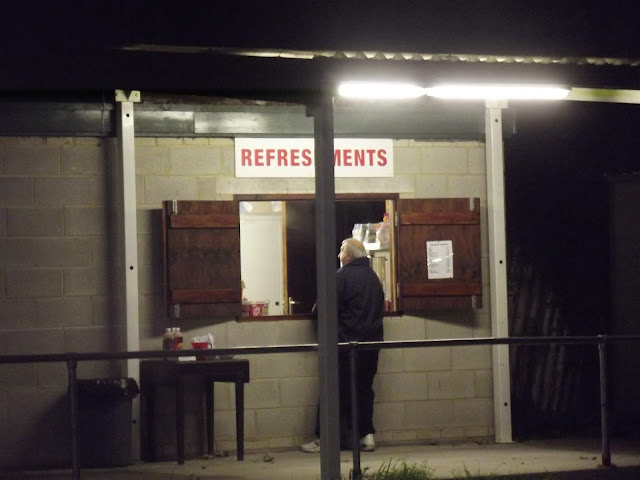 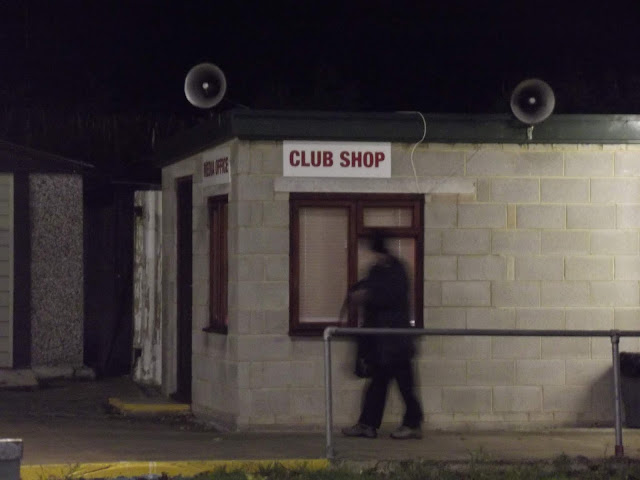 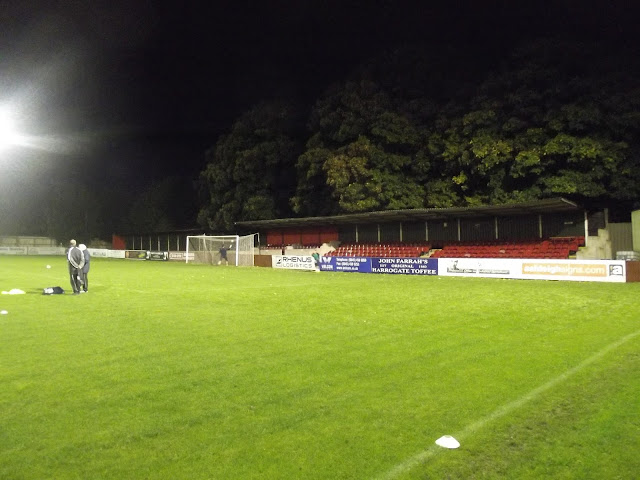 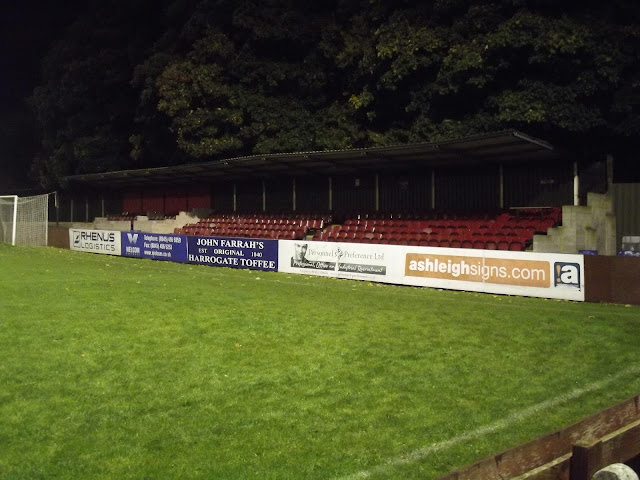 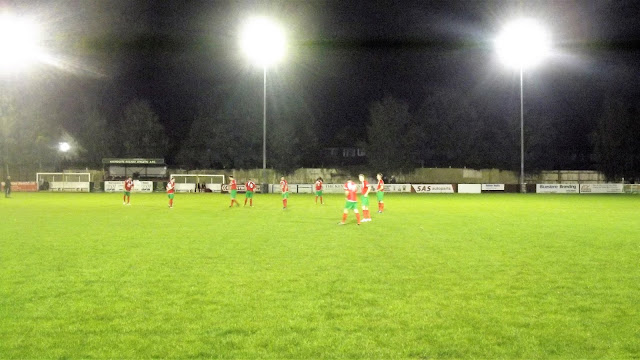 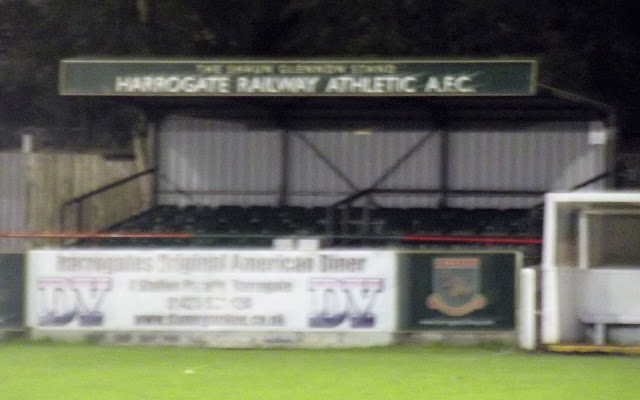 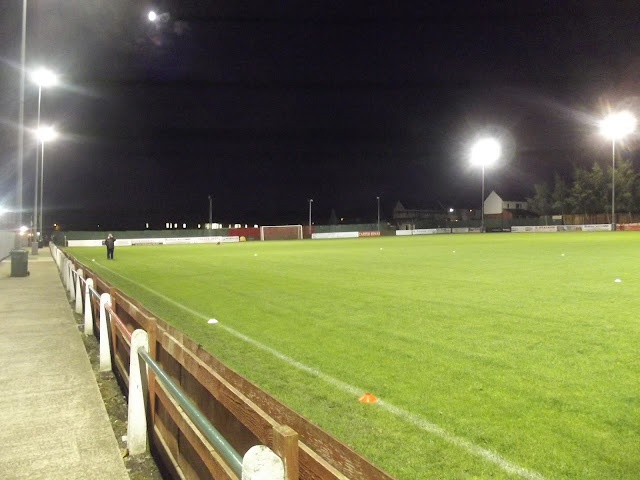