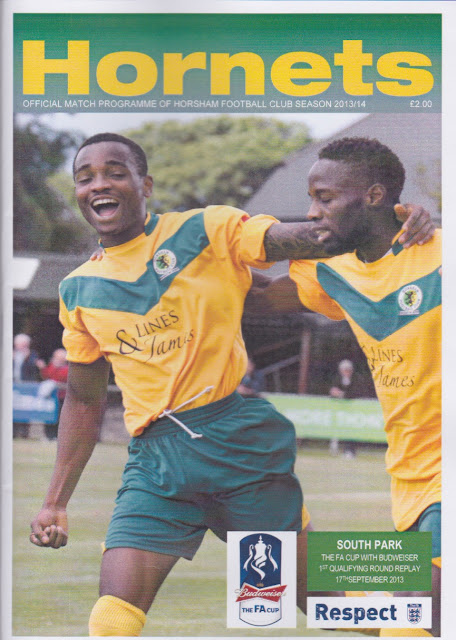 For my 299th ground and the one before my 300th at Lazio, I wanted to do an FA Cup game, as I had done one in every round of the cup so far. In fact, I had been to 4 so far and had seen some really good games. I had 2 options that I had whittled it down to - AFC Rushden & Diamonds v Cockfosters and Horsham v South Park. By virtue of it being a tiny bit closer and the home side being at a higher level, I opted for Horsham. I had actually been to Gorings Mead before, to take pictures on the way down to Brighton for an England game. I had seen them play once before, back in 2008. They gained a great result at AFC Wimbledon, beating them 4-2 and I remember a deaf player, called Lee Farrell having a really good game.I had the day off on Tuesday as usual and got my haircut and went down town in the morning. Originally I was planning to leave at 5.30, but with me seeing that kick off was at 7.30, I thought I'd better aim for something nearer 5, just to allow for traffic. I'd had lunch quite late, so I packed a few things to eat later in my bag and set off at 5 on the dot. As usual, the M25 was its usual charmless self, but after around 45 minutes delay, I got to Horsham just after 7. It had been raining on and off all day, but luckily it was dry when I arrived.

After taking a walk around the ground and getting some pictures, I went and took a seat in the main stand. According to reports, Horsham really should have tied the game up on Saturday but in any case, they started strongly. Just 5 minutes in, Ross Morley shot through a crowded area to give them the lead. It was 2-0 on 11 minutes - Ryan Marriott's shot going in off the right-hand post. And it looked to be game over for South Park, as the home side took a 3-0 lead on 26 minutes, a shot just inside the area by Billy Dunn looking like the game had been all but won at a very early stage. From then on till half time the action died down a bit, but the few chances that there were fell to Horsham. It was pretty much the same for the first 25 minutes of the second half too. But then South Park had their first real chance of the game when they forced the keeper to save with his feet. From the resulting corner, the ball was cleared to Kieran Lavery whose shot found the back of the net. Less than a minute later it was 3-2. It was Lavery again, this time with an excellent long-range shot. South Park then took a grip of the game and it looked as if extra time was a huge possibility, despite it looking very unlikely with less than a third of the game gone. They had several chances to equalise, but on a break, Horsham got into the area and were awarded a penalty for a foul. Jamie Cade stepped up and obliged and the game looked dead and buried. Miles Mitchell added a fifth in injury time just to make sure, after good work from Billy Joe-King. It was a fair result in the end. Horsham had been the better side apart from a 15-minute spell where South Park looked like they could create some of that famous FA Cup magic and complete an amazing comeback. It had been a good game too with plenty of good goals. By now it was hammering it down with rain and as I had parked my car around 5-10 minutes walk away, I was glad I'd brought an umbrella. I got back to my car at 9.40 and had a good journey home, arriving back at 10.50.

GORINGS MEAD was originally the home of Horsham YMCA FC, and in fact still is. Horsham FC used to play at Queen Street, which backed onto the currrent ground. However this was sold for housing in 2008 and after a season's groundshare at Worthing and a failed attempt at getting planning permission for a new stadium, they moved back to the town and into Goring's Mead. They are still looking to get a new ground, but despite YMCA playing in the Sussex League, it is still a fairly decent ground.

It's mainly uncovered standing though. As you come though the turnstile, on the near side is a covered terrace, holding around 400. Behind both goals are open but on the clubhouse side there are 2 stands. The main stand is raised above pitch level and offers a good view. There is also an 'arena' type stand on this side which is half terrace and half green seats.

The tea bar looked good, but with no one to run it, they had to make do with selling teas from the club house, which is pretty basic with a limited range of drinks. It does however have Sky and there is some trophies and other photos on the walls. The club shop is only open on Saturday games, and you can see what they sell on their website. The town is a 15 minute walk away and has a decent selection of places from what I could see driving through it. You are probably better going here if you have the time pre-match, but nevertheless I enjoyed my visit here and saw a good game of football. 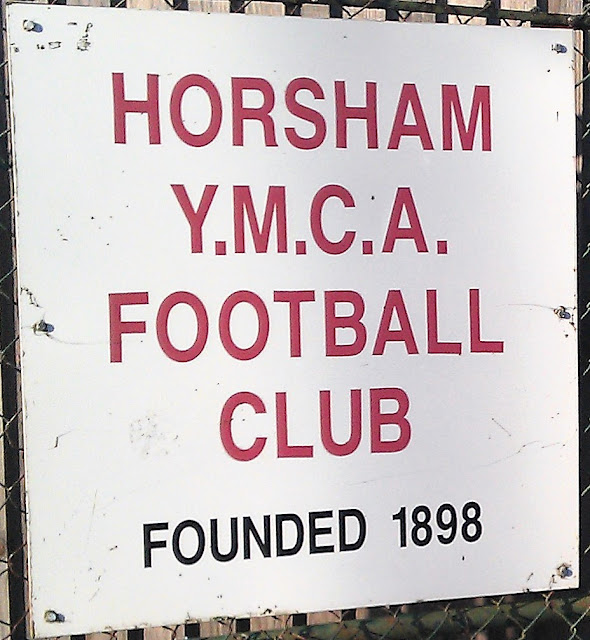 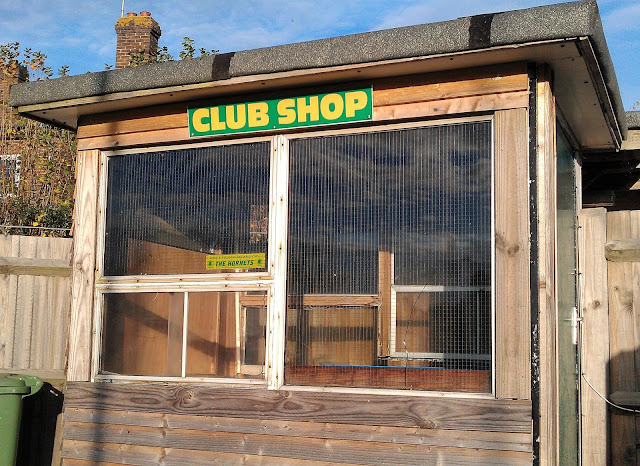 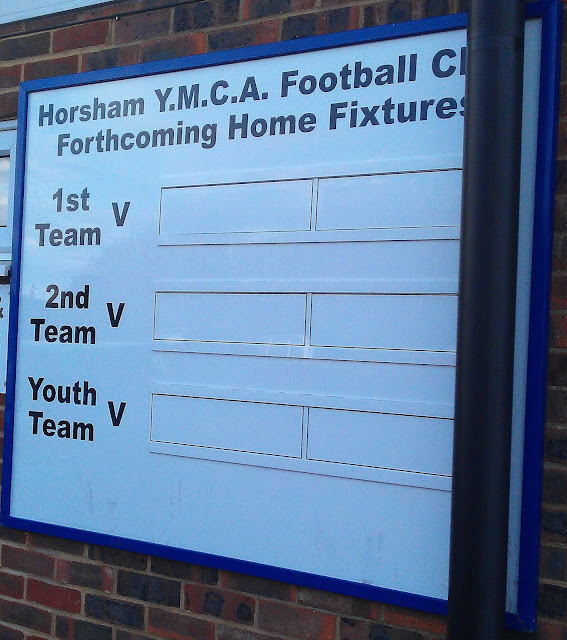 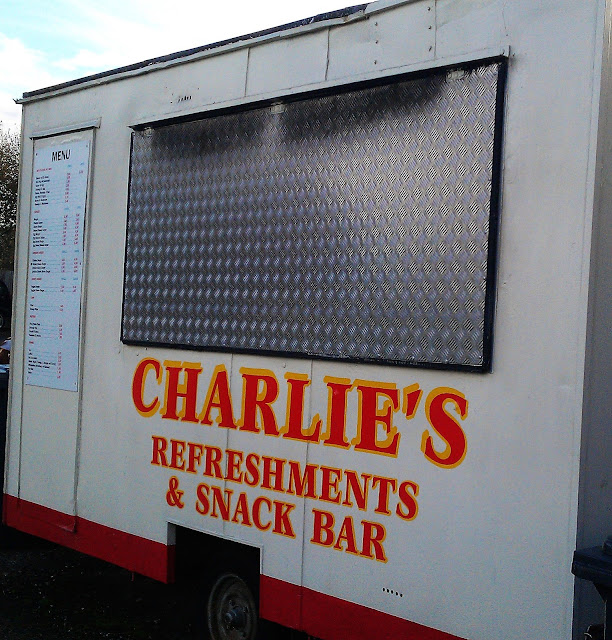 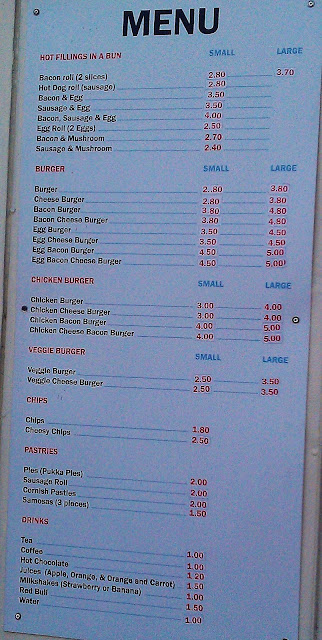 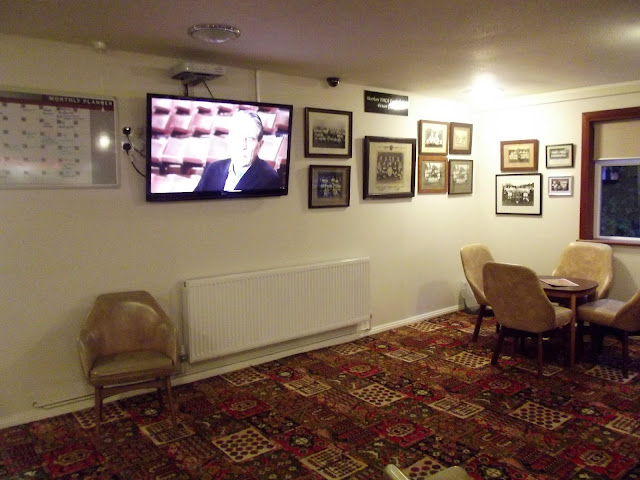 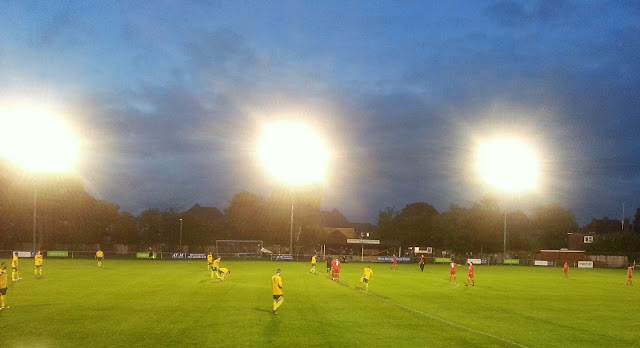 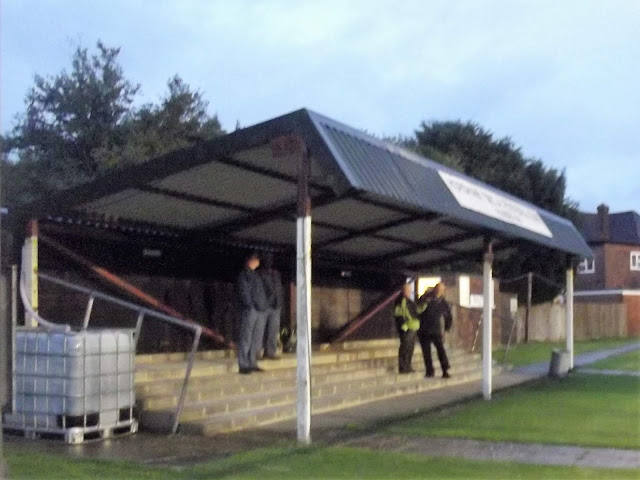 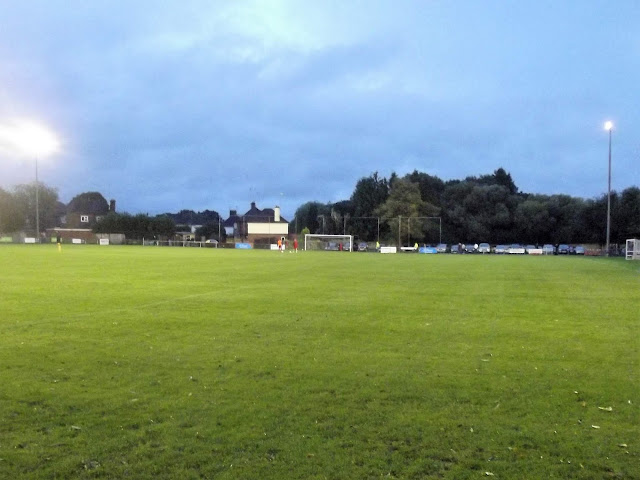 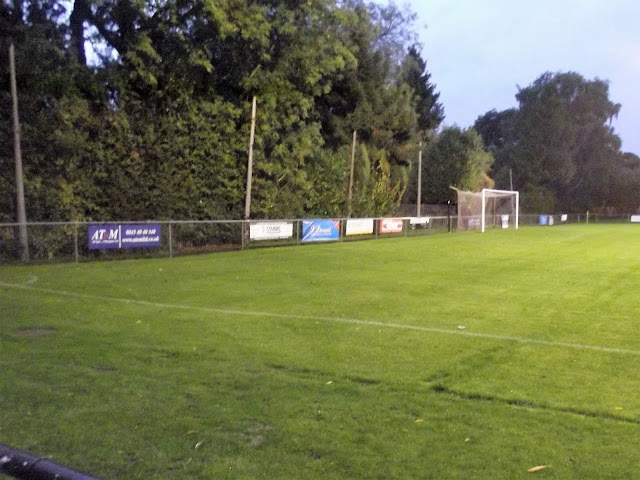 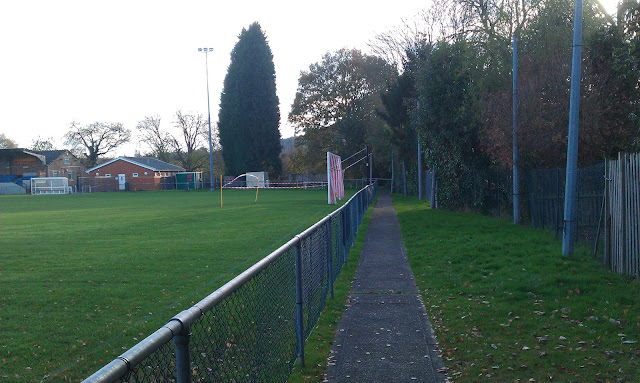 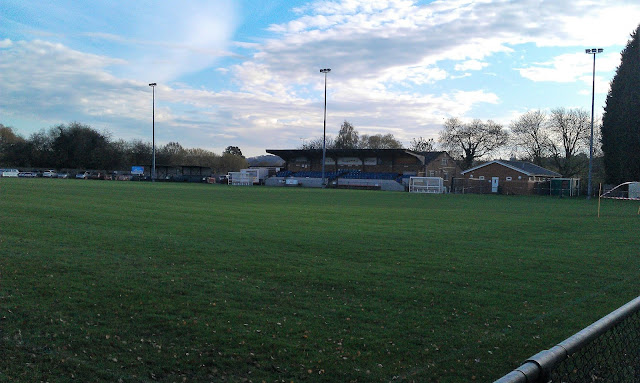 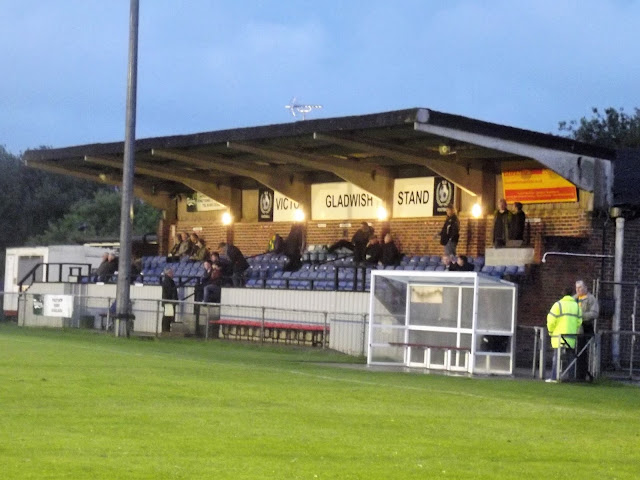 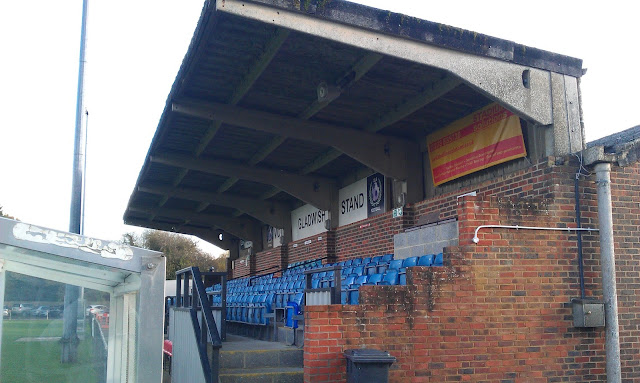 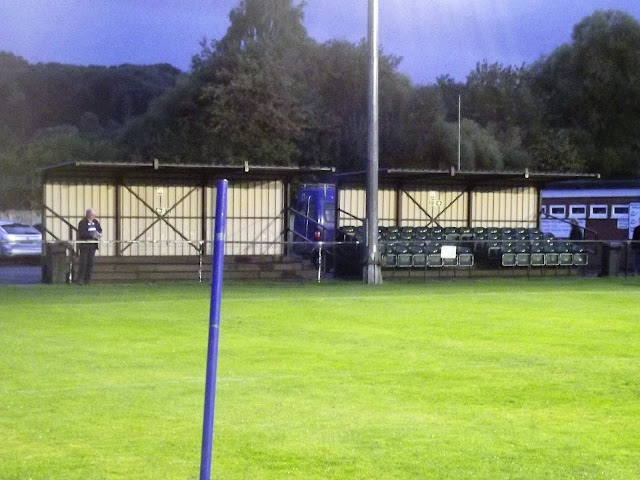 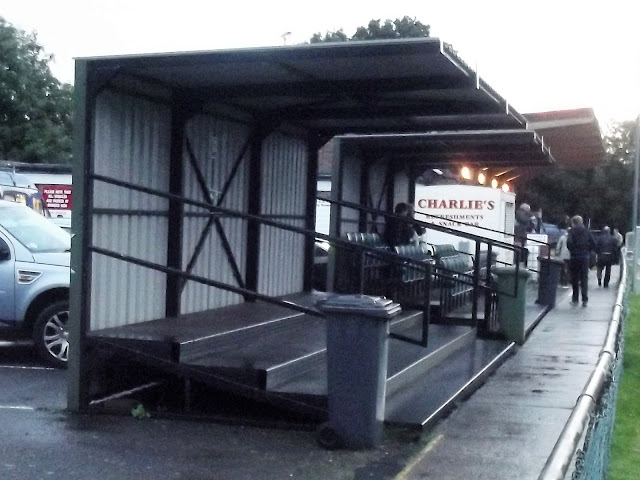 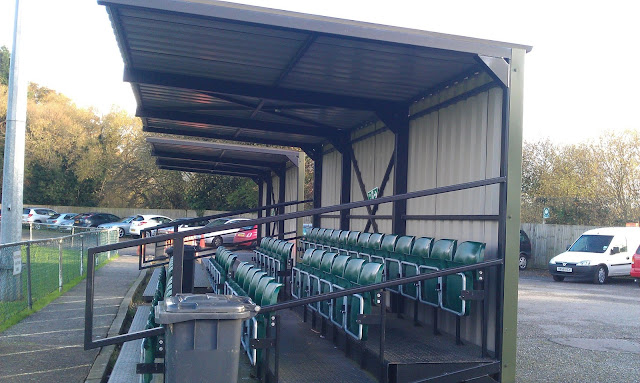