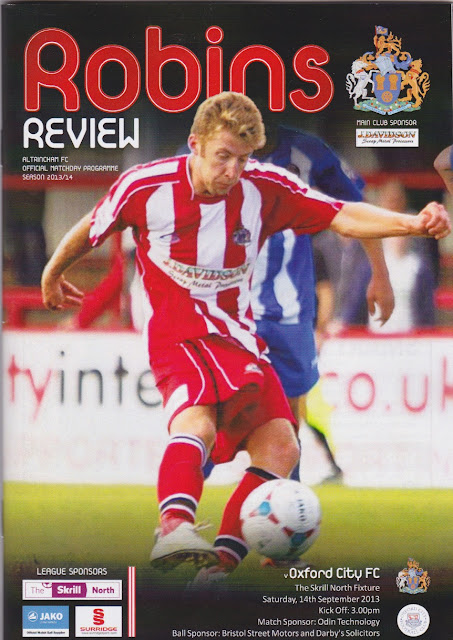 I had been on the Oxford City team coach on a few occasions last season, and at £10 had provided a great value way to do some grounds that I wouldn't normally be able to afford to do on my own. Though the cost had risen to £15 this season, it was still great value, and worked out at around a third the cost it would have been in fuel, even taking into account having to drive to Oxford to get the coach. I was planning on doing a few more this season, towards my target of completing the Conference North. This one was an especially good one to do, as Wycombe were on a long trip to Plymouth that I had been to many times and fellow groundhopper Anwar had done this ground already. Wycombe had played the visitors Oxford City in pre-season, and they had looked a very useful outfit, so it was somewhat of a surprise to see them struggling at the foot of the table, even at this early stage of the season. I had seen them play at Halifax, Corby, Colwyn Bay and Stalybridge last season and after a good start, their form faded a bit towards the end, due to injuries and tiredness. They even had to play Thursday night's to fit all the games in. I had seen them quite often through the years, as they have had a number of ex Wycombe players on their books and have always been a nice club to visit. 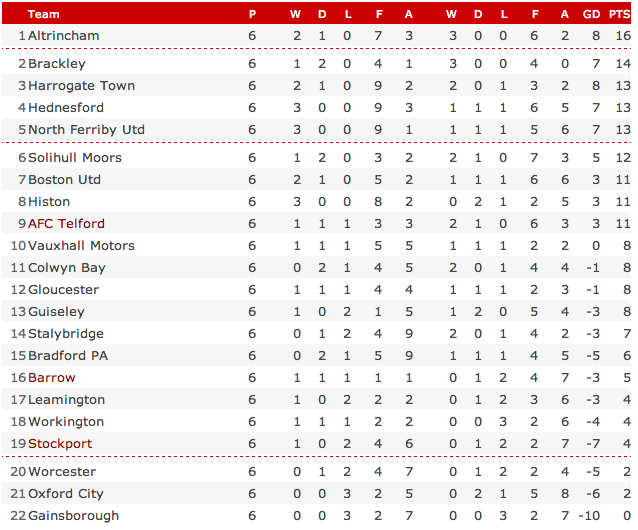 Altrincham meanwhile were flying high at the top of the table and were unbeaten at home, so this result looked as if it was a formality. They were a famous old non-league club who had spent many seasons in the Conference Premier. Wycombe played them in the 1991 FA Trophy semi-final, a few months before I started supporting them, Wycombe progressed on that occasion and went on to beat Kidderminster Harriers in the final. My first experience of them was in one of my first games watching football. On Bank Holiday Monday in August 1991, a Mickey Nuttell hat-trick helped Wycombe to a 4-2 victory at Adams Park. The following season was not so good, a 2-0 defeat to them at home towards the end of the season saw a tired and lacklustre performance from Wycombe. However, it didn't matter, as it was the day that Wycombe were crowned Conference champions and earned their rightful place in the Football League. Although I had not seen them play since I had gone and taken a look at the ground on the way to Stockport for a Wycombe game one time and it was one that I wanted to go back and visit for a game in the future. 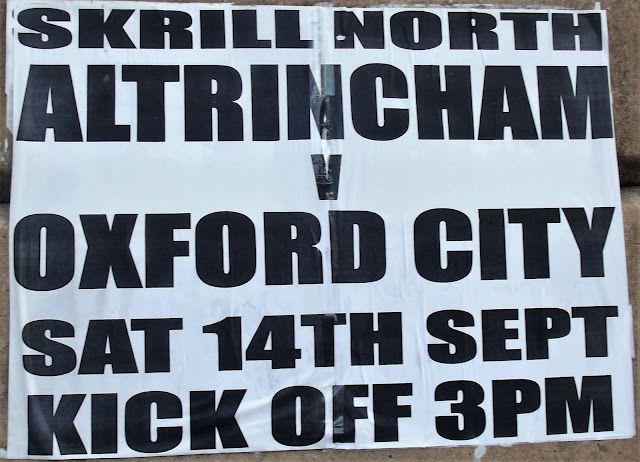 The night before wasn't the greatest nights sleep I have ever had. Despite going to be fairly early for a Friday at 11pm and hoping to catch a lie in, I still woke up at just after 5am. I killed the time by watching TV and checking Facebook etc on my phone. Eventually, it was 8.45 and time to leave for Oxford. After stopping for a paper, I still arrived with 10 minutes to spare and in plenty of time for the coach. I was happy to get a double seat to myself, I hate not having space to move around. The coach left about 5 minutes late at 9.50, and after picking up players at Banbury we were on our way. The coach progressed steadily up the motorway, but with plenty of stopping and starting for queues on the pathetic M6. Annoyingly my phone wasn't charging with its emergency charger, a fault I hoped would be down to the USB lead which I could buy later in town. I turned it off during some of the journey, just in case I couldn't charge it and killed time by reading various magazines, including an interesting Whitby Town fanzine. It was inevitable that we would have to stop at services at some point for the driver's 30-minute break, though I really wanted to get there and down a couple of decent pubs I had spotted. Depending on how long it took to get to town, I was tempted to go back after too if they were really good. The team normally took until 6 o clock to get back on the coach, but sod's law dictates that the one time I chose to go for a sneaky one after, they would have a change of plan and I would be stranded up north, leading to an expensive train journey home. 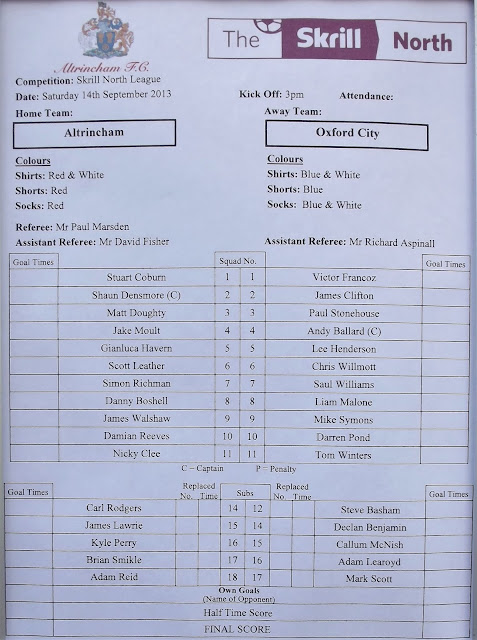 In the end, due to the horrific delays on the M6, they didn't stop, meaning my pub time wouldn't be curtailed by too much. Much amusement was had on the way up when some of the players put manager Mike Ford's number on a sheet of paper and showed it to a coach full of women celebrating a 30th birthday party. It resulted in a couple of phone calls coming his way, though he took it all in good spirit. We finally got to Altrincham at 1.35 and I was straight off down town. First stop Poundland and a lead that solved my charging problems as well as a few other bits. That was it shop wise, as I was pushed for time. Costello's was the first stop, and a retry of Orchard Pig Traveller was consumed. Then onto the other pub, The Old Market Tavern. Again nothing new on the cider front, so I had a Belgian Cherry Beer for a change. By then, I was cutting it fine for kick off, but I stopped at a lovely place called The Canadian Charcoal Pit. I had a great burger and chips for £4.90. It was so much better than the rubbish that McDonald's serve.

Anyway, I got to the ground just in time for kickoff. It turned out to be a great game. Basically, Altrincham went 2-0 up, but Oxford City came back in gallant style and drew 2-2. It was well deserved and there would have been no injustice had they claimed all 3 points. It was also super news for Wycombe who destroyed Plymouth 3-0, and a lot of my mates teams won as well. So I was in a good mood, and enjoying celebrating a good result in the clubhouse with Mike Ford and the Oxford City directors after the game. A nice couple of pints made the journey home a lot easier. As I have said before on this blog, Oxford City are a really friendly club and I had enjoyed another good day with them. We left at 6pm and made much better progress on the way back than we did on the way. Fair play to the coach driver, he put his foot down and we made great progress. The checkpoint of Walsall FC was reached quickly, and then we saw a coach load of Cardiff fans on their way back from Hull. We dropped half the team and the manager off at 8.20 in Banbury and from then on we didn't have far to go. We got back to the ground just after 9 and after a quick drive home I was back by 9.40. I had a couple of ciders, caught up on Facebook and watched Match Of The Day and some of the Football League Show before going to bed. 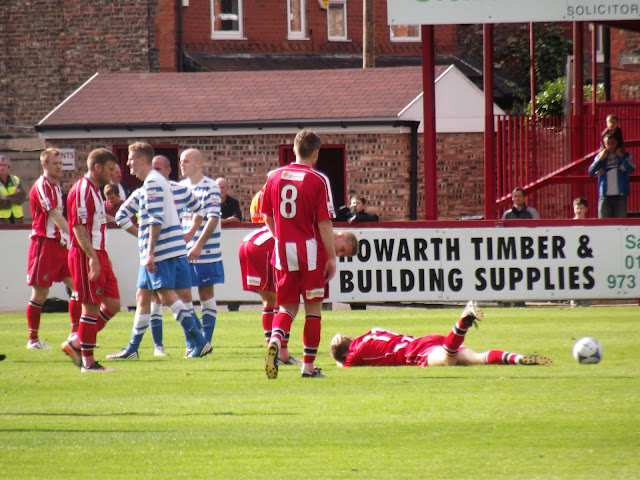 MOSS LANE is a wonderful traditional football ground, and there aren't many like this left. On one side is seating for around 1200. This is comprised of the large Carole Nash stand which has pillars and side windows that could impede your view. It has good legroom though, as does the family stand, which has better sight lines. To the right is the Carole Nash and Family Terrace which is the only uncovered area in the ground, apart from a small bit of terracing on the seated side. The other 2 sides are spacious covered terracing and are good for getting an atmosphere going. The ground was unsegregated when I went, which is how it should be.

Although the club shop did not have the pen or drawstring bag I wanted to buy, it did have lots of old programmes and books and I spent £3 on some good reading material. The tea bar was nice but a bit pricey at £2 for a tray of chips. Likewise, the clubhouse, a well-kept pint of Kingstone Press Cider was £3.20 Further afield offers better options, the town is a 20-minute walk away and has some nice places. There is also a chippy opposite the ground, though I didn't try it, it has won local awards. Overall, it was a great day and is a must tick for any serious groundhopper. 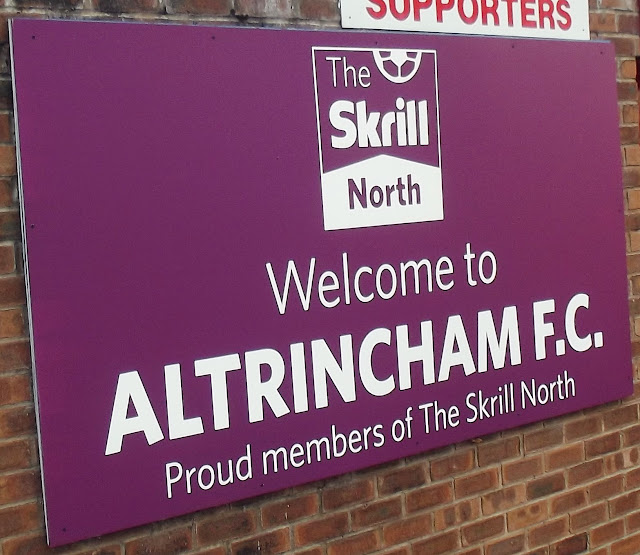 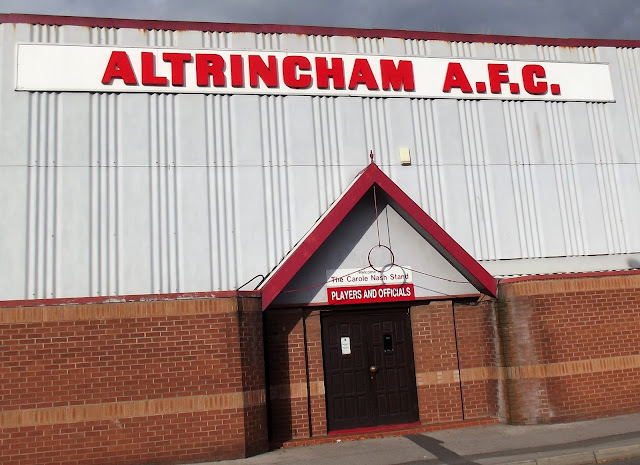 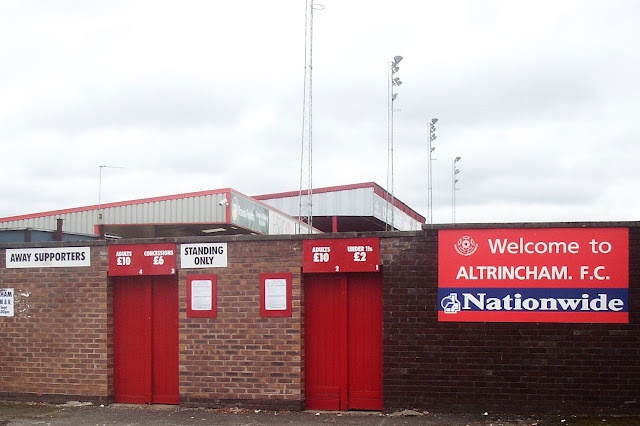 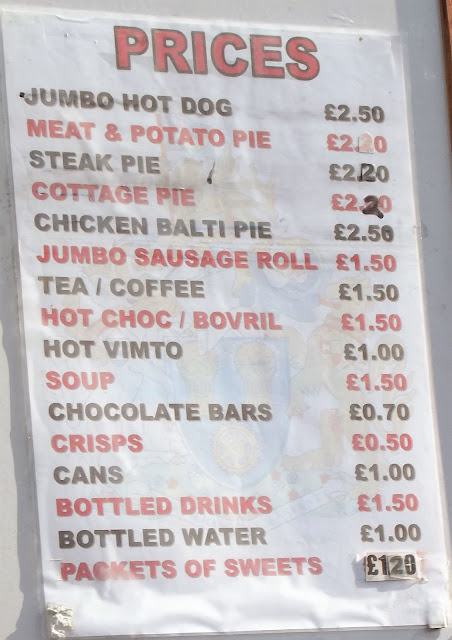 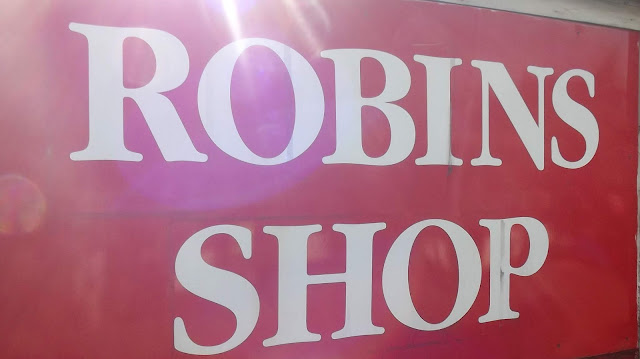 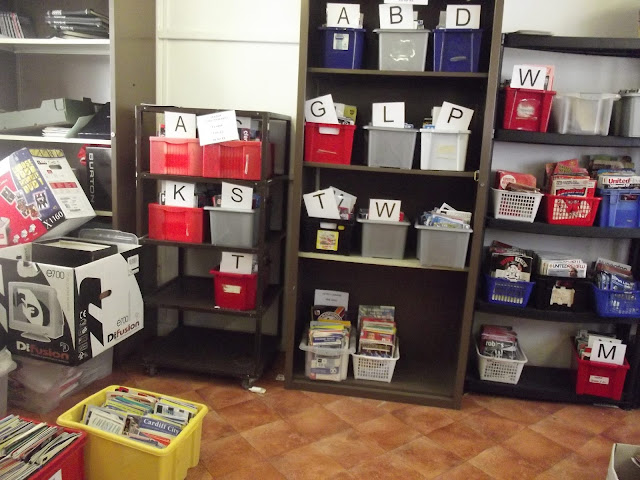 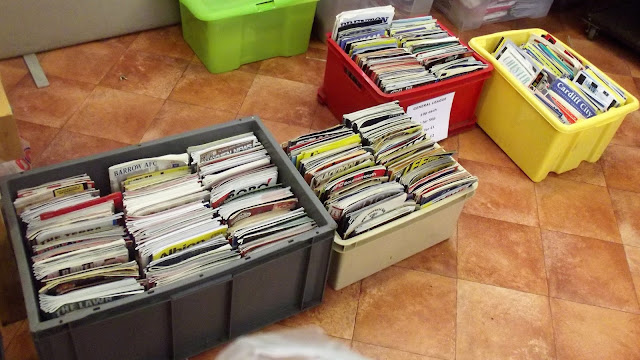 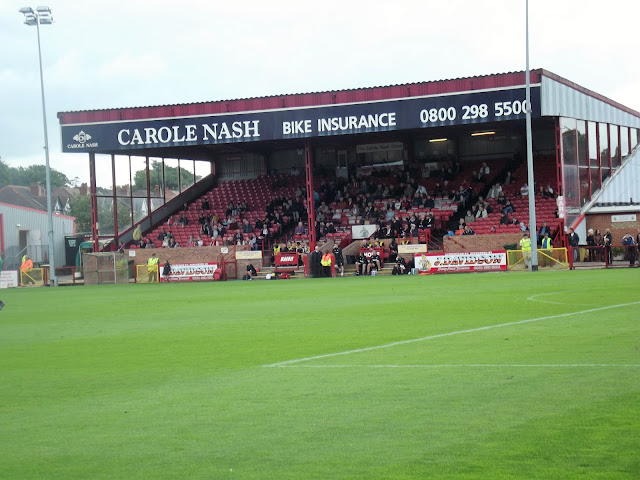 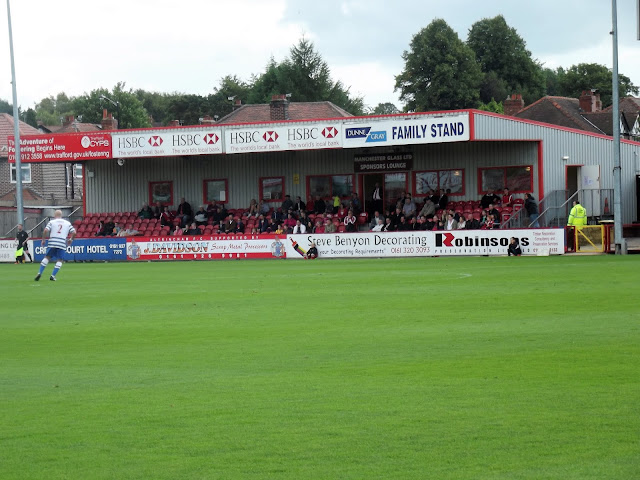 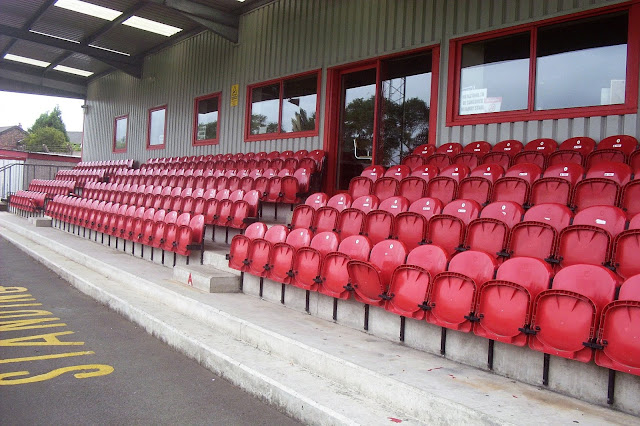 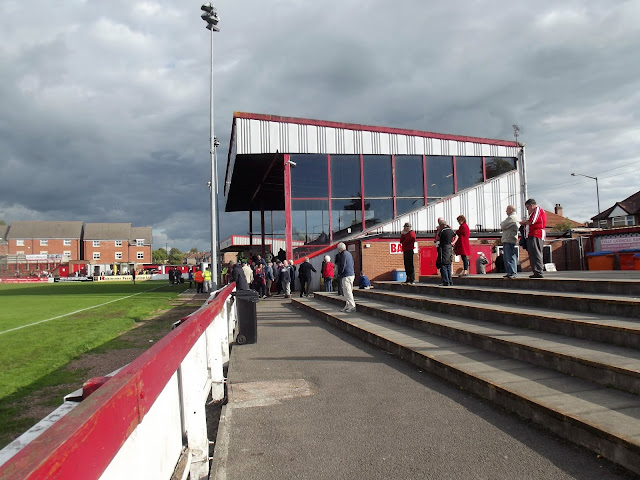 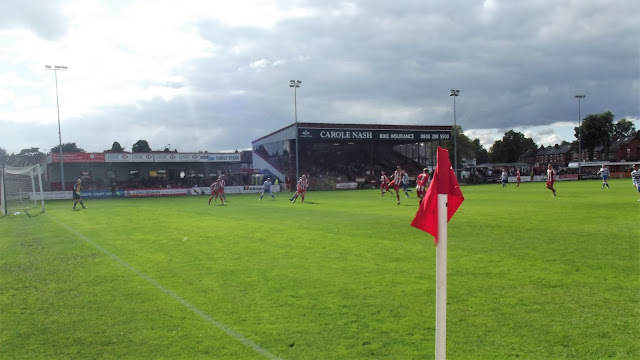 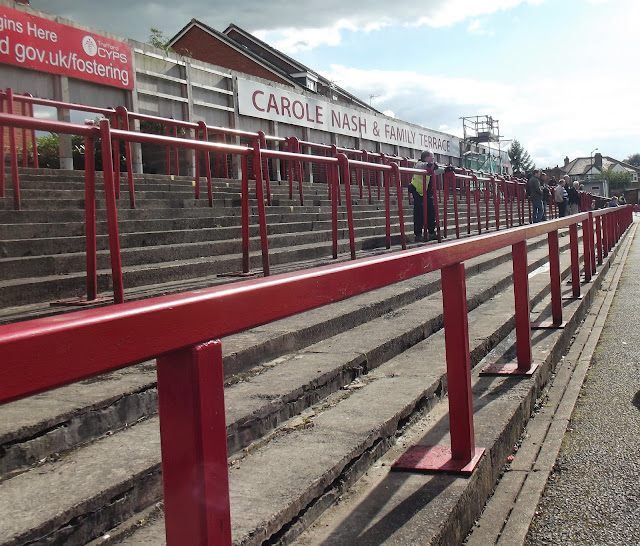 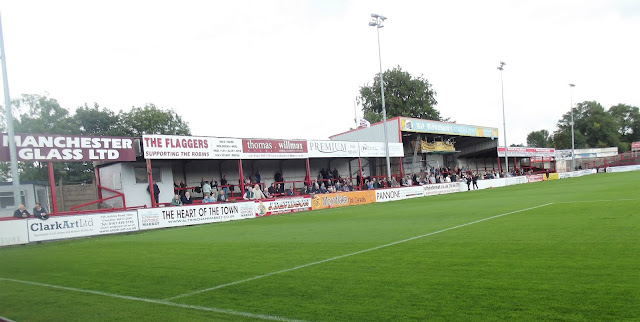 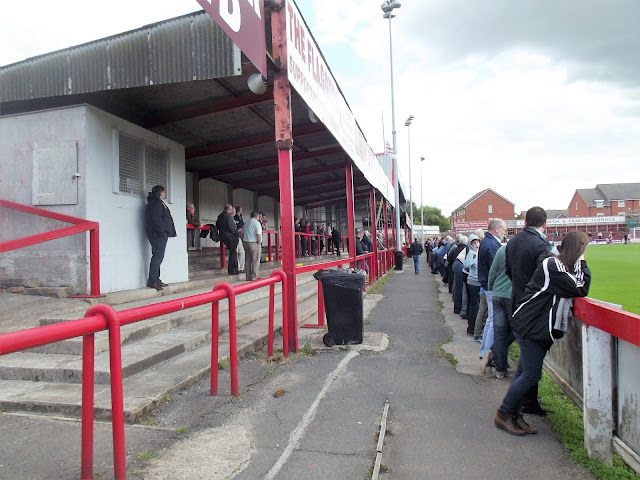 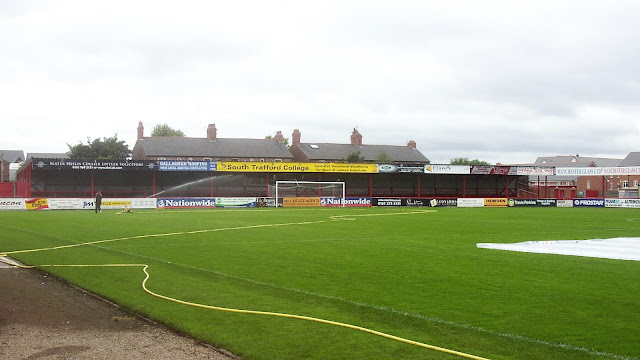 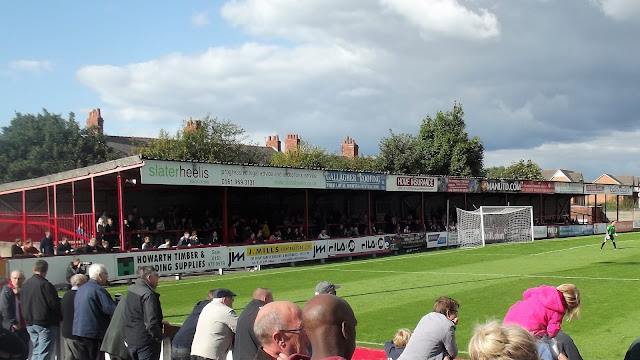 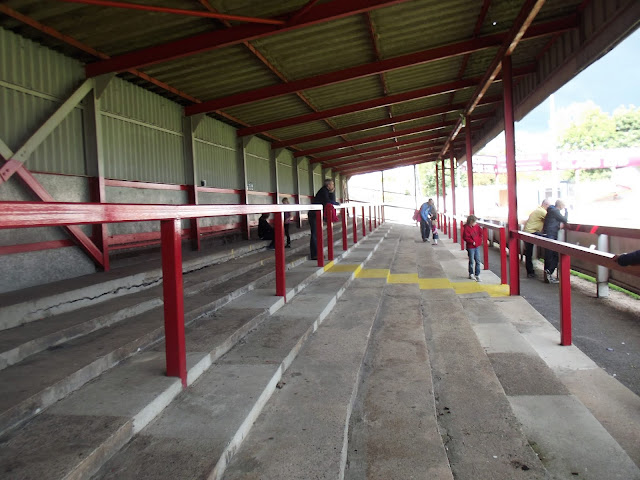