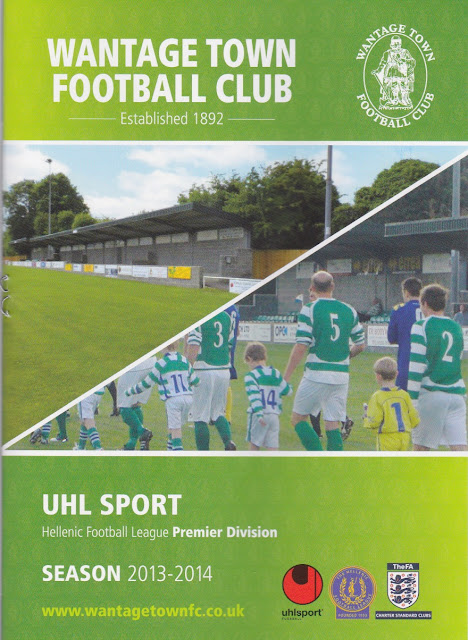 WANTAGE TOWN FC - A BRIEF HISTORY
The club was established in 1892 and played in local leagues at first such as the Swindon & District, the North Berkshire and the Reading & District. They won four titles in the Swindon & District League and after the final of these, they moved up to the Hellenic League Premier Divison. Wantage Town have spent the vast majority of their Hellenic League membership in the Premier Division and have been champions twice - in 2011 and 2014. Their lowest Hellenic League finish was 17th in Division 1 in 1979. After the second Hellenic League title, Wantage Town moved up to the step 4 Southern League D1 South & West. They would stay here for three seasons but always struggled before being relegated back in 2017. They'd become Hellenic League champions for the third time in 2019 and last season competed in the Southern League D1 Central. They were one of the few beneficiaries of the season being abandoned - having gained just one win and one draw from 28 games when the season was abandoned. This season has seen a huge improvement with three wins from seven games so far with lessons obviously learned over the break.
Wantage Town's best FA Cup run came in 2018 when they beat  Oxhey Jets, Slimbridge and Bishops Cleeve before they lost to Hungerford Town on penalties in a 2nd Qualifying Round replay. The FA Trophy has not proved a happy hunting ground for the club and my latest visit would represent their best progress, whatever the outcome. Their best run in the FA Vase has been the 3rd Round, reached on four occasions. The club has won numerous local cups including the Berks & Bucks Intermediate Cup in 1955, the North Berks Cup in 1920 & 1921, the Reading Senior Cup in 1983, the Hungerford Challenge Cup in 1994, the Newton Greystoke Cup in 1992 & 1999 and a number of Hellenic League Cups. The club record attendance of 550 came for a friendly against Oxford United in August 2003. The historic market town of Wantage was part of Berkshire up until 1974 when it was reclassified as Oxfordshire. It has a population of just over 11,329 and was the birthplace of King Alfred The Great in 849, hence the ground's name of Alfredian Park. Other famous people from the town include poet John Betjeman. former football commentator Hugh Johns and jockey Lester Piggott. 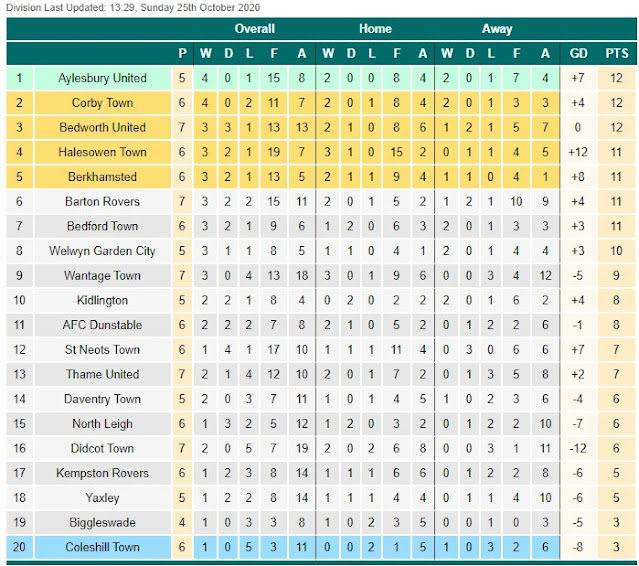 With my trip to Rome in a months time, and my plans to see Lazio play, I was trying to make that ground my 300th. With me currently being on 292 before tonight's game, I had to get my skates on and do 3 in a week in some cases. So tonight was a great chance to get started, a local derby in the FA Cup and a nice Friday night to spend out watching football. I had been sorting some of my previous PC problems out since my last game, with stuff getting sold on and going back. Also, I had won £40 on bets during the week, and with Anwar back in the passenger seat and keeping me company for tonight's game, things were looking a bit better financially. I had spent the day working till 12.30, before going home and relaxing in the afternoon. I left home at 4.20 and went into Aylesbury for a look in a few shops. I had also been eyeing up a pub, the Royal Oak, just half a mile from Wantage's ground as they had up to 20 real ciders, with me hoping to try one or two, bearing in mind the fact that I had to drive home. I met Anwar at 5.45 and despite having a bit of trouble finding the ground as the entrance was not very clear, we were in there by 7. I paid my £6 to get in, plus another £1 for a programme. It's the 3rd out of 3 FA Cup games this season that I have paid for out of my car window, just like Harry Redknapp giving an interview on transfer deadline day! 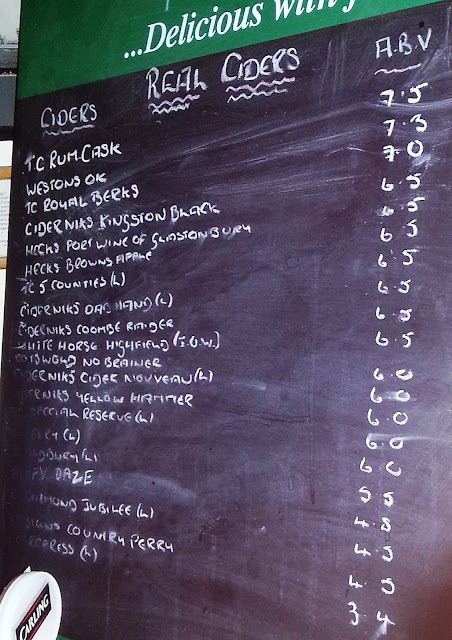 I jogged down to the pub, getting there around 7.10. Time was really limited and so I only had time for a quick one. I chose CiderNiks Noveau and as it was a bit of a bitter and acidic one, the barman let me try it before I bought it. It wasn't the best I have had and was certainly different, but I wanted to make my judgement over a whole pint. It was certainly good value, especially for the south, coming in at £2.80 a pint. I only wish I'd had time to try more. After that, I went looking for dinner and as I was in a rush, there weren't many options and so I settled on a portion of chips for £1.50 from the local Chinese. They were pretty nice, but I was still hungry when I got back to the ground and got some more from them too. I got back with around 8 minutes to go before kick-off. I bumped into fellow groundhopper Laurence who introduced me to a few people off of the non-league message board that I go onto, including a Portsmouth fan who I chatted to throughout the night. I then went to find Anwar and we found a decent spot to watch the game from.

The game started at a good pace and the home side could have had a couple within the opening 5 minutes. However, it was a scrappy own goal that opened the scoring. Pablo Heynsham's cross was deflected into his own net by Sean Webb. Both sides had good chances to score, but it was an excellent curling shot from Jermaine Ferreira that gave Didcot a comfortable 2 goal lead at half time. It was a fairly slow start to the second half but Wantage got a goal back on the hour mark when Richard Claydon finished from close range but minutes later Heynsham restored the 2 goal lead with a great strike from distance. Claydon, who had only come on as a substitute in the second half got his and Wantage's second with time to spare to give it a real go. But despite giving everything, Didcot managed to hold on and Wantage's FA Cup dream was over for another season. After the game, it was a much quicker and clearer drive home and after stopping at Tesco and dropping Anwar off, I was back home by 11.05. I had a couple of ciders and watched Baker and Kelly on BT Sport before going to sleep. 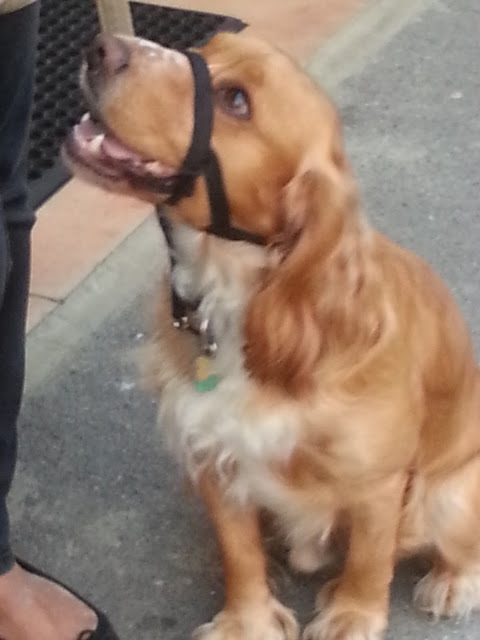 MY SECOND VISIT
There has been a desperate lack of Friday night football, given the fact that clubs could see a significant attendance boost when playing on a Friday night. Even in these days of limited capacities, the vast majority of clubs were not filling their grounds. I'd resigned myself to a night in this week but then on Monday, fellow hopper Adam pointed me in the direction of Wantage Town v North Leigh, a local derby in the FA Trophy. It would be a revisit with me having been in 2013 but my blog could have done with a spruce up and beggars can't be choosers. I had to book my ticket in advance and it was a reasonable £8.67 including booking fee. The only shame was that an excellent pub that I had gone to last time, the Royal Oak, was still closed for drinking in following the lockdown but I was hoping to get some cider to take away, though I couldn't make the early collection time stated on their website. Despite making initial contact, they hadn't replied since Monday which was annoying as I was looking forward to picking some stuff up to take home. I'd been tired in the days leading up to the game and was in bed by 9 on the night before. Thankfully, work was fairly easy and I was out by 11. I spent the rest of the day home and left at 5.20, meeting Colin at our friend Paul's house at 5.45. We were soon on our way, the roads were clear but there were a lot of small country roads to go down. We got to the ground at 6.50 and parked up. I was peckish and keen to help out the club so I got myself a portion of chips for £1.50. They were OK, certainly not as good as the ones I had at North Leigh though. I took a place on the dugout side for the game though it was quite busy all around the ground, though people were generally following social distancing rules. 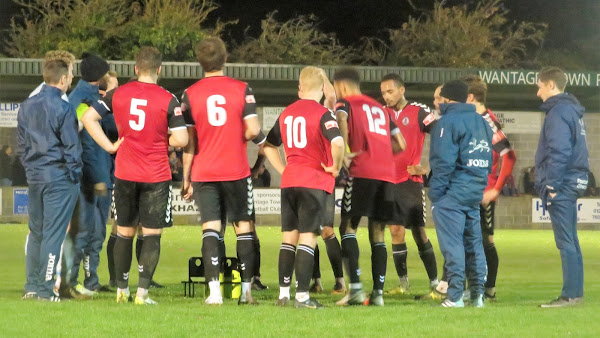 Looking at the form, Wantage had enjoyed mixed results in the last six games. They'd beaten Thame United 3-2 in their latest game and Sholing 2-0 in the FA Trophy. They'd also picked up a 3-1 over AFC Dunstable. On the flip side, they'd lost heavily, 5-0 at Berkhamsted recently and also 3-2 at Kempston Rovers and 4-2 at Aylesbury United. North Leigh had also had a mixed bag of results with a 4-2 win over Thatcham Town in the previous round of the FA Trophy and a 1-0 win over Coleshill Town in the league. They'd drawn 2-2 at home to St Neots but had suffered some heavy defeats - 4-1 at Bedford Town and 5-0 at both Halesowen Town and Yaxley. The game started scrappily, Wantage having slightly the better of the chances. but it was North Leigh who opened the scoring on 32 minutes when Callum McNish headed home a cross from the left at the back post. McNish got his and his sides second from the spot on 42 minutes after a penalty was awarded for handball. A minute from the break it was 3-0 North Leigh and pretty much game over thanks to a spectacular long-range effort from Lance Williams. Williams then got his marching orders in the second half after tempers boiled over. Wantage were the better side in the second period, but they didn't create many chances. The hosts did pull one back on 58 minutes when a high ball was put forward and Ryan Williams nodded home. North Leigh sealed the win right at the death, it was a delightful run down the left by the North Leigh man, he cut inside and curled a delicious shot in at the far post to make it 4-1. We left around 9.25 and it was a much better journey home. I dropped Colin off in Amersham and got some petrol at Tesco before getting home at 10.40. There were strong rumours of a second lockdown - only this time, schools and universities would be kept open. You know - the very things that opened in September, just as the cases rocketed, but I'm guessing that's just a coincidence. Just as it was a coincidence that ever stat table I have seen has education as the place you are most likely to catch the virus. Just par for the course with this useless government and the robotic lockdown fanatic in charge of the opposition is little better.

ALFREDIAN PARK is typical of grounds at Hellenic Level, in that it only has one stand. But it is one of the best in the league, running the full length of the pitch and being a combination of terracing and seating. This is more than enough for most games. The rest of the ground is open and is used as a car park, so if it's cold you can sit in your car and watch the game. The tea bar is good and well priced, the chips I had were decent enough and hot drinks like Bovril were only 50p. There is a clubhouse that I didn't try, but no club shop that I could see. 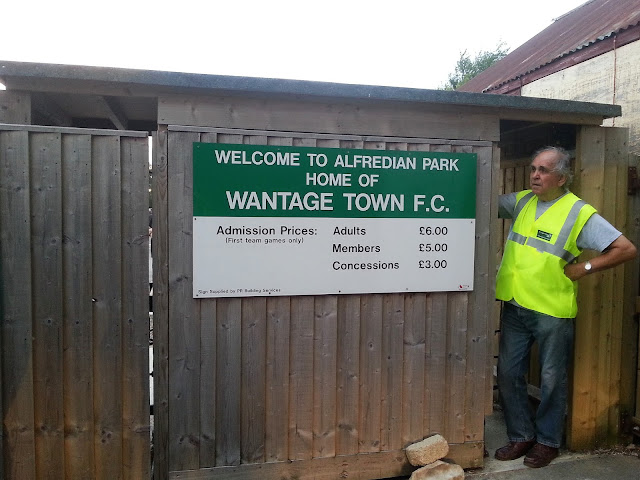 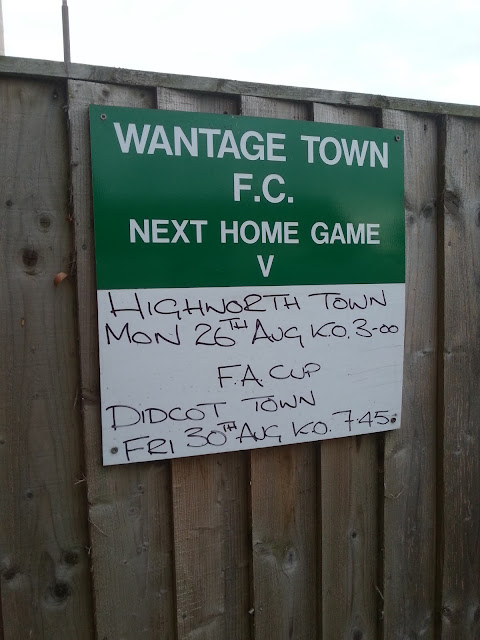 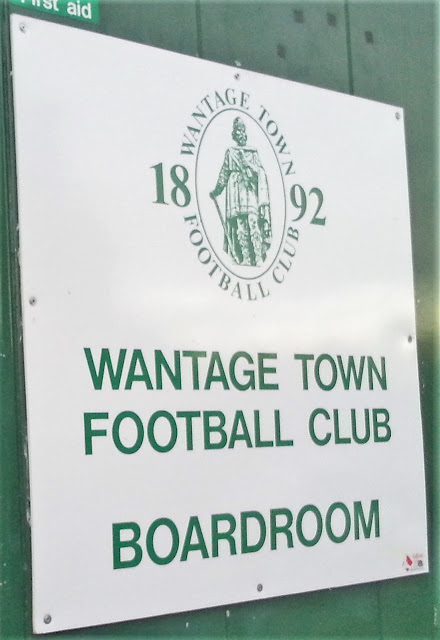 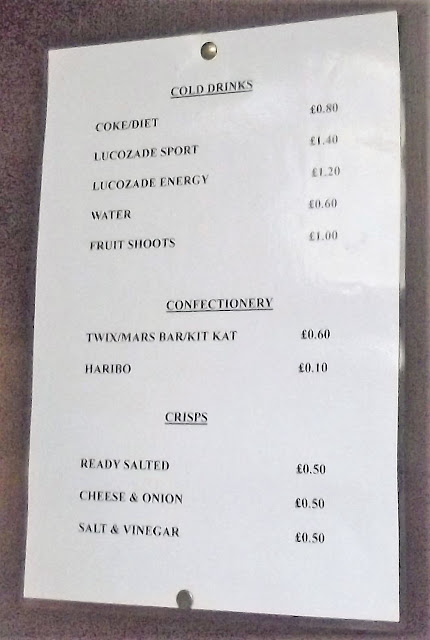 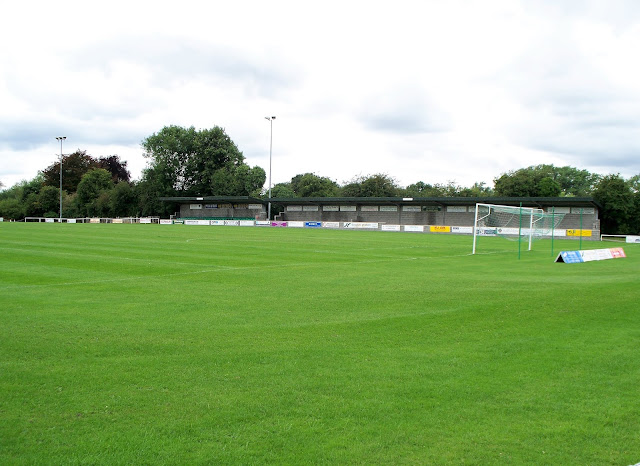 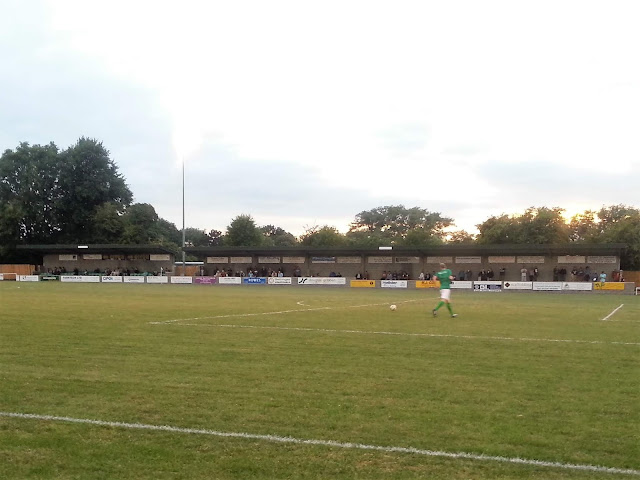 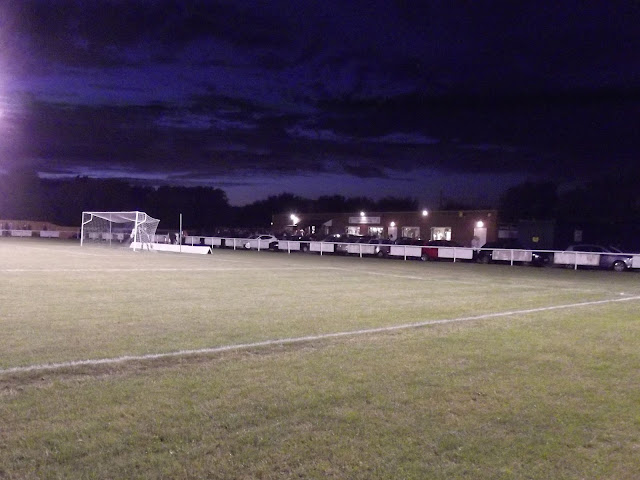 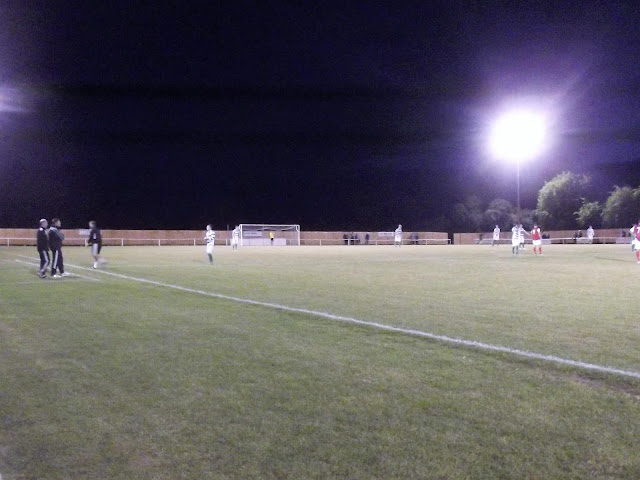 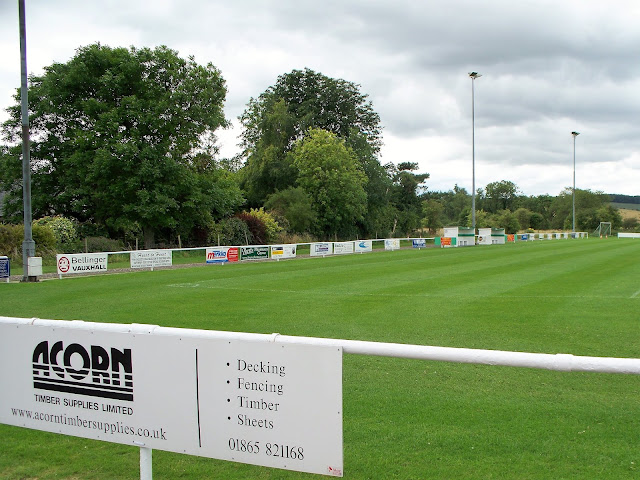 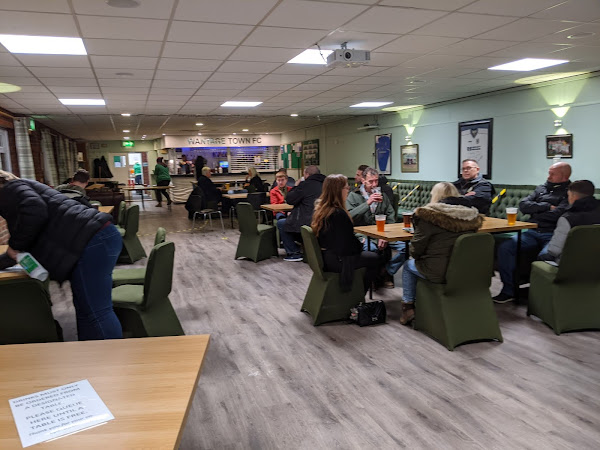 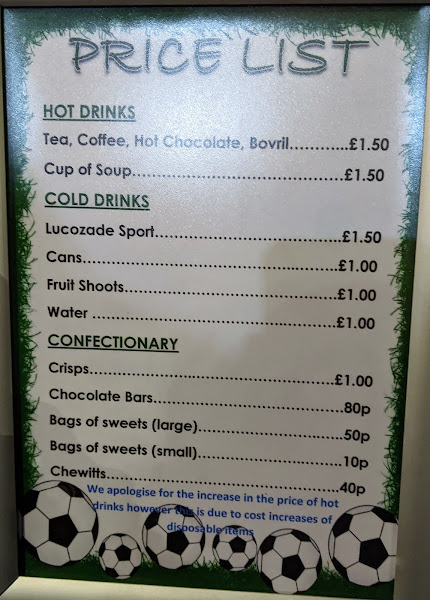 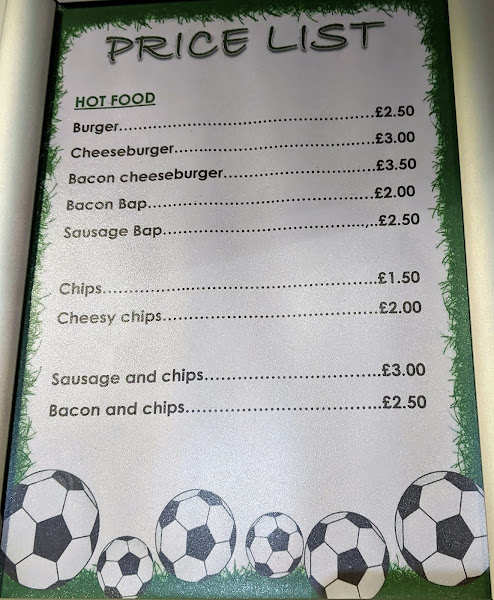