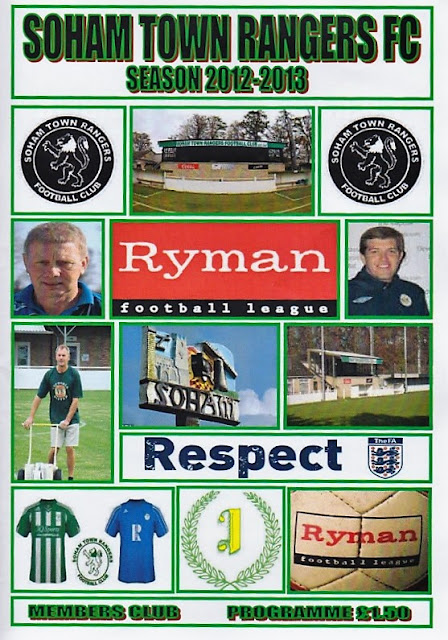 Sadly Soham is most famous for an awful crime in which happened in 2002, where 2 young innocent girls lost their lives thanks to a callous murderer. As 100 people the first thing that comes to their mind when you mention Soham, and I'd say about 98 would say that incident. You may get a couple mention Turner's lorries that are seen all over the country, but unless it was a dedicated non-league football fan, they would not mention the team.

Soham Town Rangers have certainly done well in recent years. Up until 2008, they were playing local football, eventually winning the United Counties League title. Promotion to the Southern League was earned, and they maintained their step 4 status, transferring to the Ryman League a couple of seasons back. The visitors today has suffered a sharper change in fortunes. In recent times they were in the Conference, finishing high up the league and getting some notable results in the FA Cup. But financial woes meant that they lost their ground, and due to being unable to fund Blue Square South football, they ended up going into the Ryman Division 1 North. After a rocky start they looked to be getting their act together. They started the game in 2nd place, with Soham not far behind in 6th place.

After the footballing disaster that was last Saturday, I was looking to plan properly today. There were serious doubts that the Burton v Wycombe game was going to be on in the days before the match. I had already lost one game this weekend. Last night I was due to go to North Leigh v Didcot Town in the Southern League Division 1 & West on Friday night, but that got called off in the afternoon. It was a bit of a surprise to me as the bad weather had not yet hit down here, despite various friends up north reporting horrendous conditions. So instead I stayed in and had a fair few drinks and watched England destroy San Marino 8-0 on the TV. When I got to bed just before 3am, it was still not snowing and I thought that should my trip to the Pirelli Stadium go for a Burton I would have plenty of choices down here. I awoke at 8am to discover a blanket of white outside, which showed no signs of clearing on grass, but the roads looked fine, even my small road which is a dead end was clearing quickly. There were still a few accidents reported though. Wycombe's own player Sam Wood was involved in a smash that closed 2 lanes of the M40, but thankfully he escaped unscathed and the motorway was up and running again in around an hour. Just as happened last week, fixtures were quickly being called off. Initially, I fancied Tunbridge Wells v Shildon in the FA Vase Semi Final but then that was deemed as unplayable UNLESS they could get supporters to clear it, then there would be another inspection. I did think about driving down and lending a hand but was worried that it would be frozen underneath and I would have a wasted journey 2 weeks in a row, especially with no backup game - Tonbridge Angels had been called off already in that area, so the signs were not good. The most promising areas appeared to be in the east, namely Kent and East Anglia. The Soham Town Rangers v Grays Athletic game was listed as going ahead pretty early on, and so I decided to have that as a backup. Initially, I fancied going to Cambridge City v Hitchin Town as the home side's ground will disappear at the end of the season and I had not yet seen a game there. But at around 10.30 I saw another one of my aimed grounds, Bury Town, confirm that their match against Cray Wanderers was on. Having a look on my CAMRA app revealed a few decent cider pubs, and there were a few shops in the town that I wanted to go to visit, it looked the complete package for a perfect day out. 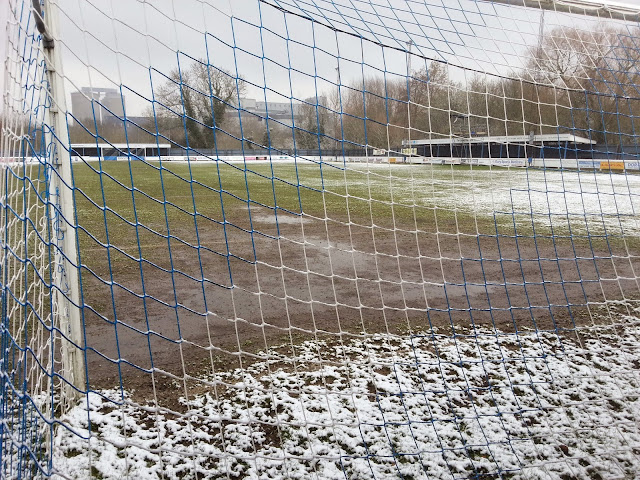 After having a bath, I left at 11.40, later that I really wanted to, as I wanted more time in the town. As I result I put my foot down, sacrificing fuel economy for a quicker journey. As a result, I knocked half an hour off my estimated journey time, without ever seriously breaking the speed limit. As I was pulling off the junction at Bury St Edmunds at 1.20, I got a notification on my phone that an email had come through, telling me there had been a reply to my post on the 'Games On' thread on the non-league forum I post on. I had a sinking feeling that I had been done 2 weeks in a row, and upon seeing the ground all open I feared the worst. The bad news was confirmed by the Bury Town Twitter feed, which had called the game off at 12.30. I went into the ground to get a few quick pictures of the ground and also look at the state of the pitch. It had some water on it, but I felt it was nothing that couldn't be solved with a bit of sand. I was disappointed to be missing out on a good ground and town. It should be mentioned that BBC Suffolk is as dire as my own local station for football coverage. I tuned in as soon as I could, hoping to save a wasted journey if the game was off, but all they seemed to want to talk about was old cars that Ipswich Town players owned. Checking Twitter, there was further confirmation that the Soham game would go ahead. So I switched to BBC Radio Cambridgeshire, which was much better. Though they were interested in a Peterborough United fun day than actual football games, they did at least keep people updated with the games in the county and what was on. They even sent reporters to the 2 remaining games left on - Soham and St Neots Town v Kettering. I got to Soham at 2.15, easily parking up, and glad to see people going in through the turnstile. After paying to get in and getting a programme, I went in the bar and chatted with a couple of Grays fans I went and checked if there was anything special, cider wise, up the bar. There wasn't and as I only had a fiver on me, I decided to resist. There was still half an hour till kick off, so I sat in the warm and read my programme, before going out to take some pictures of the ground. By that time it was nearly kick-off time, so I went to the tea bar to get a burger and chips for my lunch. Both were delicious and great value, with the burgers being sourced from a local butcher. 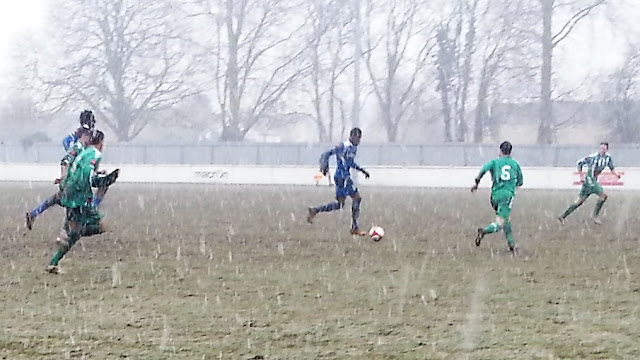 The game itself was pretty good and was most welcome on a day when most games had been wiped out. Grays started the better side, but Soham came back into it. They took the lead on 18 minutes when an excellent long-range shot from Neil Andrews which arrowed into the bottom right-hand corner. Grays started to apply the pressure again and equalised on half an hour when Joe Sweeney headed in a cross at the far post. The second half was only 5 minutes old when the visitors got what turned out to be the winner. A free kick went over the wall, straight at home keeper Dan Bircham. But he spilt the shot and Jack West prodded home, Grays continued to have the better of the game and could have had more. But Soham had a couple of efforts cleared off the line in the closing stages, but overall the visitors deserved the points. I had a pretty easy journey home, getting back around 7. I was just glad to have seen a game, after horrendous weather. I should have seen the signs when my first preseason game at Evesham was in danger after torrential rain on the 2nd July. The upside is that there will be lots of choice of games as the season winds down, hopefully in nicer conditions. If the winter continues it's unwelcome overstay, I can see there being serious issues with the season being completed in time. 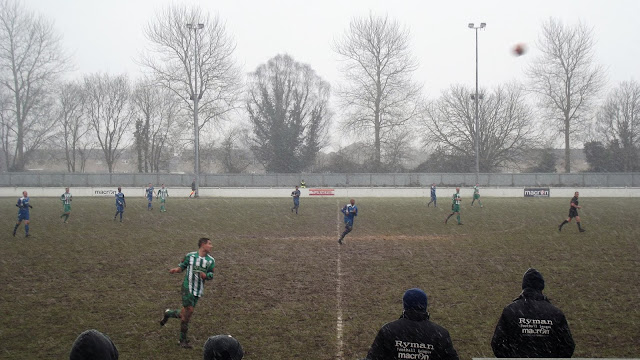 JULIUS MARTIN LANE is a traditional but nice non-league ground. It will probably suffice for Ryman Premier football, but any further up and improvements will be needed. With a capacity of 2000, it is more than adequate for most non-league crowds. The main stand is pretty old, holding 250, being elevated but having restricted views on a lot of the seats, due to the sides of the stand being solid. Entry to the stand is quite unique, going up a set of steps at the side, before going through a door at the top to get in. There is covered standing at both ends of the ground and along the main stand side. The other side is out of bounds to spectators, due to league regulations, but that is open hard standing with grass behind it. It would be big enough to add a temporary stand if needed for a big cup game or promotion.

I didn't see a club shop at the ground, and the bar has a fair range of drinks, but nothing that I fancied. The tea bar is the one of the best in non-league, with good value tasty food Portions of chips are generous at £1.20 and the burgers and sausages are sourced from a local butcher, a lot better than the cash and carry stuff that you get at other grounds. I don't think there is much around the ground, and nothing came up nearby when I searched my CAMRA pub app. But nevertheless, I would recommend a trip here. A nice friendly club with a ground with plenty of character. And best of all, they made a great effort getting the game on today when other nearby teams had games called off. It was most welcome and credit must go to the ground staff for giving me a game to watch today. 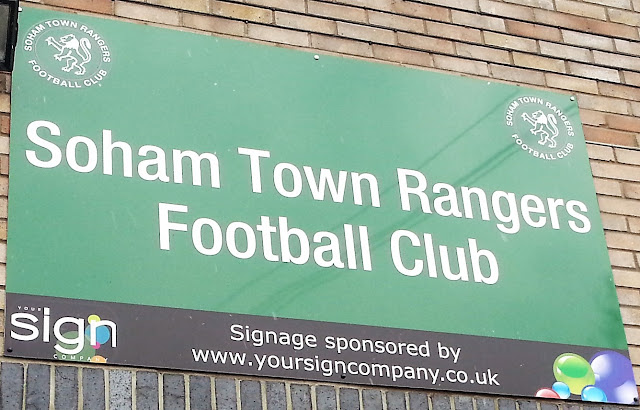 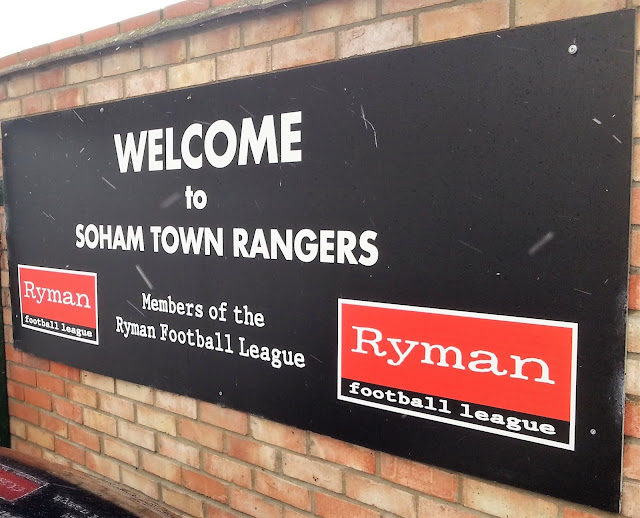 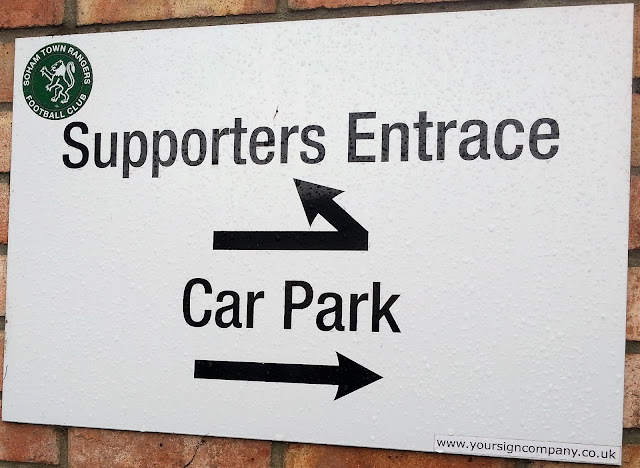 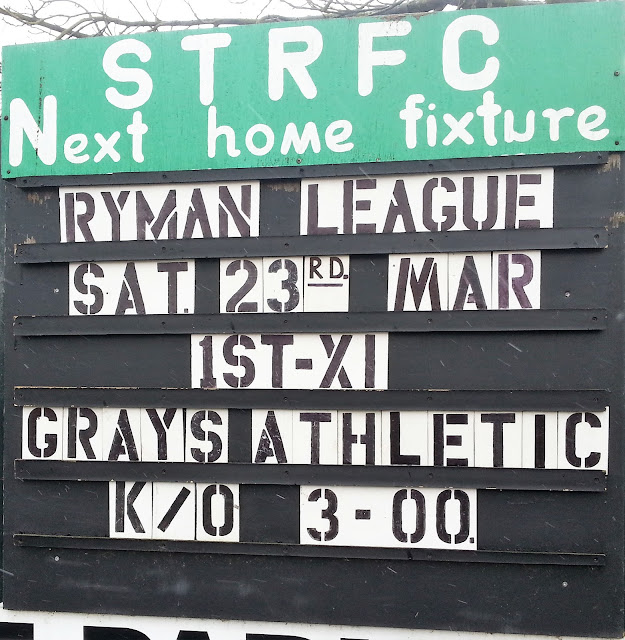 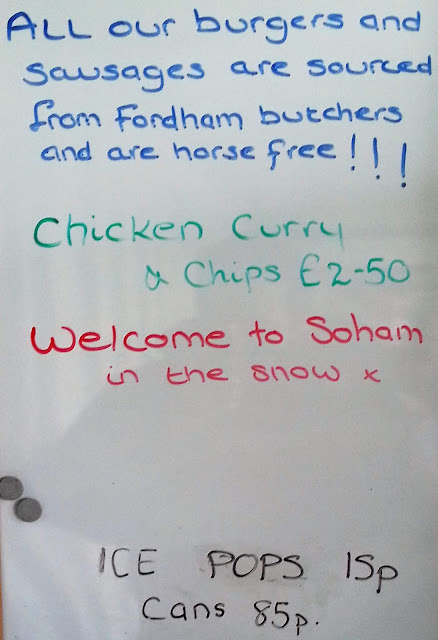 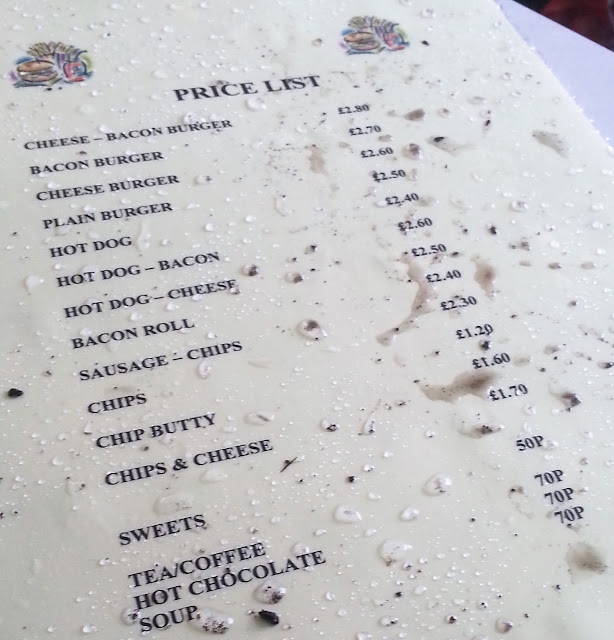 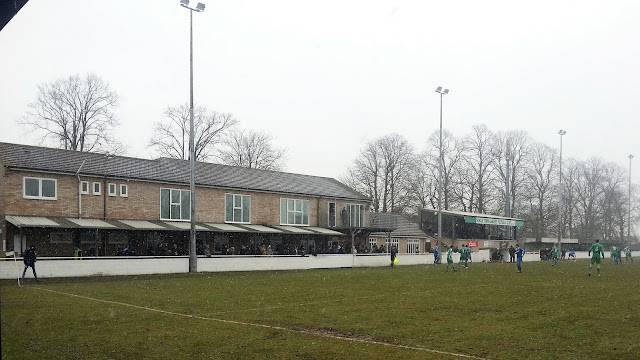 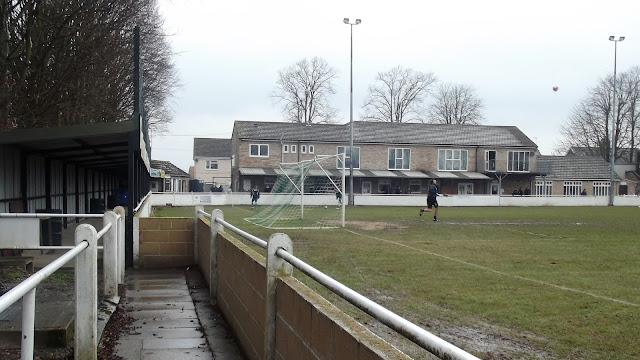 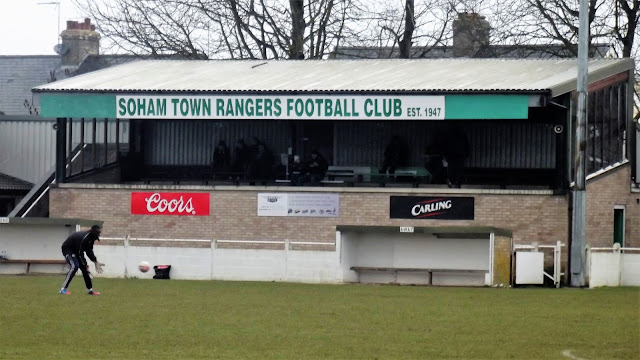 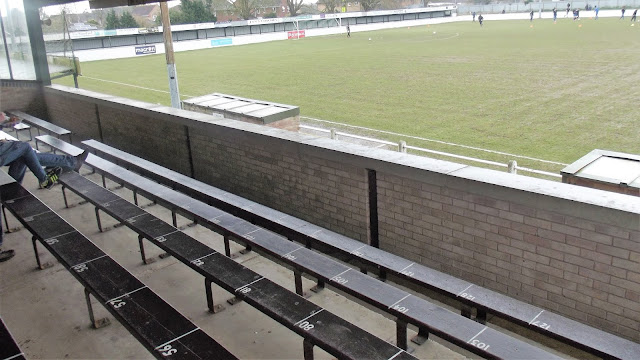 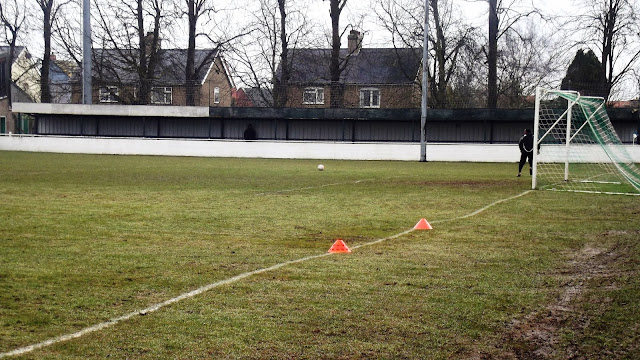 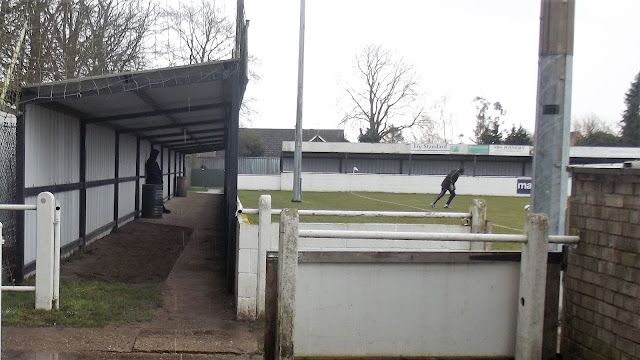 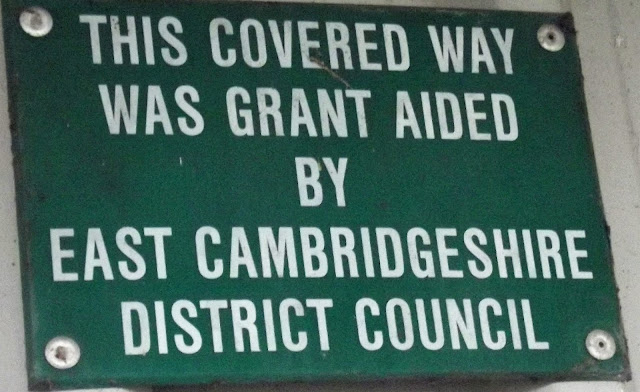 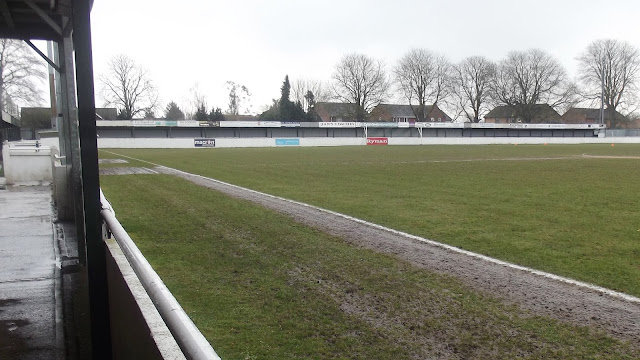 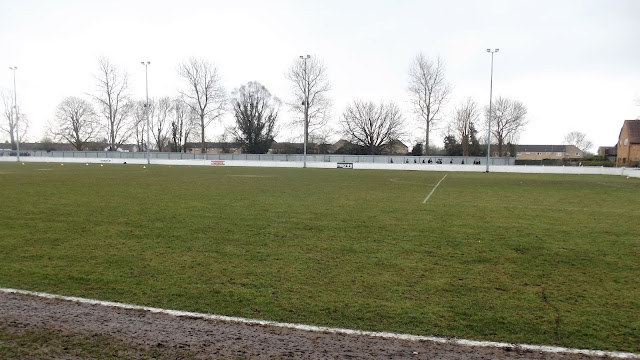 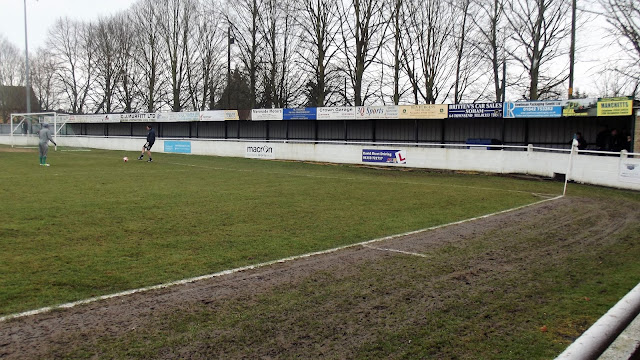