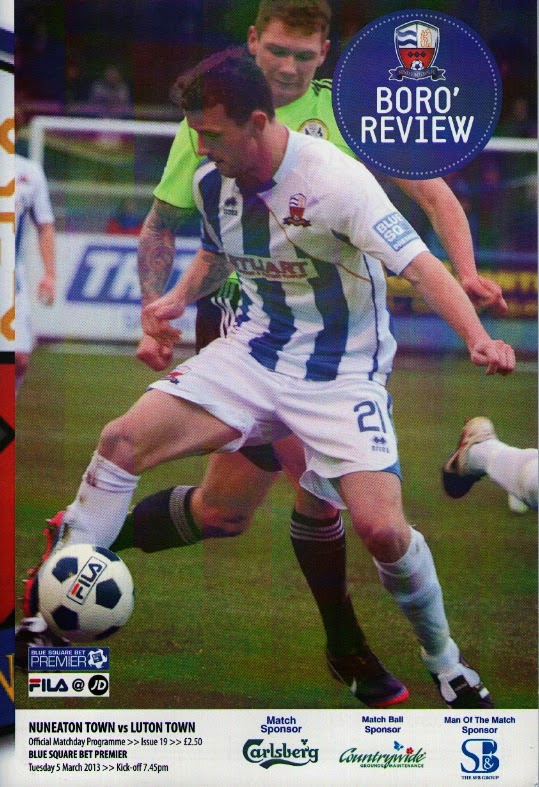 As well as being one game away from completing the 92, with Sunderland still to visit, I was also close to completing the Blue Square Premier. After tonight, as it stands, I will only have Southport and Hyde to do, hopefully doing them next season, maybe in one hit on one of my 'holidays' up North if the games fall right. I was originally planning to go to Nuneaton on the 12th January, for their game against Grimsby Town, as I know lots of Mariners fans. But that was called off due to the weather and I went to AFC Wimbledon v Wycombe, which was a good day out. I had last seen Nuneaton a couple of weeks ago as they produced a right turnaround at Barrow. Going into injury time they were 1-0 down. But 2 quickfire goals turned it around for them and gave them a vital if a tad lucky 3 points. I had seen Luton several times against Wycombe over the years, but not in a league game since April 2009 when a John Akinde goal gave Wycombe a 1-0 win as we won promotion unconvincingly. That was a pretty rough season for the Hatters, as a harsh 30 point deduction for financial issues led to them being pretty much relegated before the season had even started. It's certainly been a trying season for their loyal fans, who still turn up in force, despite remaining in the non-league wilderness since they were relegated. A succession of managers and several unhappy calls to rubbish local radio station BBC 3CR has not improved matters. I had seen them a few times since their relegation. Firstly a 2-2 draw at Hayes and Yeading in 2011 and this seasons pre-season friendly games at Hitchin and at home to Wycombe. Kenilworth Road might not be the best away day, but I have always found their fans to be a good bunch, despite them having a reputation in some quarters. In fact, I know a few quite well, but at the time of writing this, didn't know of any that would be making the journey.

On the day, I was on my day off as usual. But I had merchandising work in five different Tesco stores. I also went down Wycombe and got my car washed and to pay a cheque into the bank. I also stopped off to take some pictures of Amersham Town FC that I had never been to, despite seeing pretty much every other local team. They play at step 6 of non-league, in the Spartan South Midlands League. The ground was in a nice setting and was pretty good for that level. After I had finished this, however, I was ready to meet Anwar and we were on our way to yet another footy trip. I did have a little wait for him, so I went to a pub in Aylesbury called the Hop Pole and had half a Millwhites Chisel Jersey. Normally I would have a pint, but with me driving, I thought I'd better be sensible seeing as it was 8%. There was about a 20-minute delay getting out of Aylesbury due to temporary roadworks which were annoying as we were leaving early to avoid traffic. We did this for the rest of the journey, bar a couple of small delays on the M6 and getting into Nuneaton. As per usual, I had looked for a nice pub and had come up trumps again. This time it was called the Horseshoes and I got to try a new cider. It was Hogan's Pickers Passion and was another nice one. We had also planned to eat in the pub. Sadly I couldn't have my curry as planned, but it was maybe a blessing in disguise as there was a fish night on and they were doing 2 portions for £11 which I and Anwar lapped up. It was Haddock in a Thai Sauce with beer battered chips and mushy peas. It was without a doubt the best portion of fish and chips I have had by a country mile and would rank up there with my favourite ever meals. And at £5.50 it was around the same price as you would pay in a chippy. After our meal, it was approaching 7PM and so we got on our way sharpish, taking under 10 minutes to get to the ground. We parked up in a side street a few minutes ago and went in the home end as there was more space to roam around, a decision which turned out to be a good one. 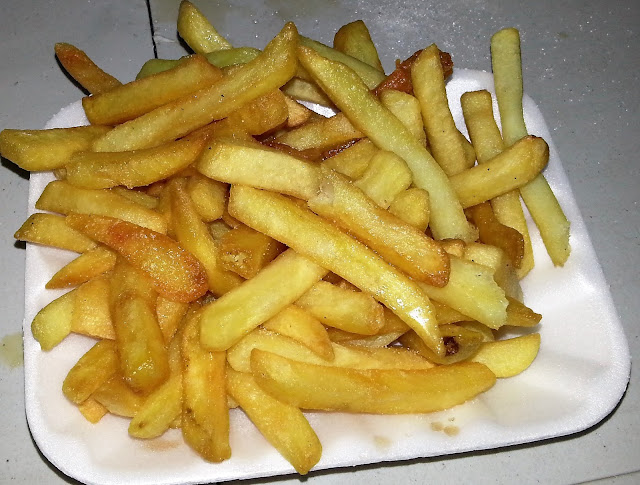 After a walk around the ground and some picture taking I went and had a look in the club shop. I picked up a Coventry fanzine and a Match magazine from 1988 which was still sealed with a free sticker album and stickers. I also picked up a pennant from the 2011 BCFA Senior Cup Final between Coventry Sphinx and Nuneaton Town which is bound to be pretty rare. That little lot cost me just £3 which I was pleased with. I was still hungry so I got some chips at £1.50 which were nice and freshly cooked before finding a spot on the halfway line to watch the game from. The first half was as dull as ditchwater, with not really any clear-cut chances. At half time I was still hungry, despite eating a punnet of grapes during the first half. So we made our way to the bar. The entrance didn't look too promising, going through a draughty temporary tunnel with flickering lights like something out of a cheap horror movie. But the bar itself was very nice. I had a generously sized pizza slice for just £1.20 before we made our way out for the second half. The second half was not a lot better, with Nuneaton having the better of the game, but really lacking in the final third of the pitch. Luton made a series of substitutions but to no avail as they were not creating much either. John Still had a lot of work to do if he wants to mould his team in the same style as his previous Dagenham team. Indeed, Luton will achieve no more than mid-table mediocrity with the current performances, which is astounding when you look at the big names on their team sheet. After a clear run home, I dropped off Anwar at 11.20, before getting home myself 20 minutes later. Our next planned trip is to Solihull Moors v Harrogate Town, three weeks from now, where we plan to go for a nice curry beforehand.

LIBERTY WAY has been the home of football in Nuneaton since 2007. The original Nuneaton Borough only lasted one season there before going bust, but supporters were on hand to reform the club as Nuneaton Town, and they have worked their way back up the football pyramid to get back to the top level of non-league. I'd visited the ground just after it was built in 2008 to take some pictures on the way to Tamworth v Barrow. And I nearly got locked in, as I went in through an open gate, went and took some pictures. But upon returning, the gate had been locked by the groundsman and it was only frantic signalling that made him notice before he drove off!

The ground is pretty bland but does its job well. The only change between my 2 visits was the upgrading of the main stand, which has gone from a temporary one to a smarter, more permanent structure. Behind each goal are good sized terraces. The bigger one with 1800 capacity is given to the home supporters, with a smaller one holding 1000 being given to visiting fans. Segregation is not always in force, however. The one remaining side is uncovered terracing. The club shop was better than expected. As well as the usual range of club merchandise, there was a good selection of old programmes, mainly Nuneaton ones. There were also old books and magazines. Talking of programmes, the night's effort was decent, with plenty to read and being well presented at the standard BSP price of £2.50 The bar had Thatchers Gold on which is probably the best you could expect from a club bar, there are also real ales on tap too. They also do food. The tea bar had a good selection of stuff at reasonable prices too. 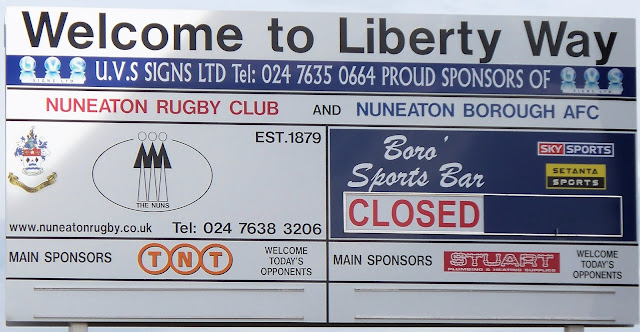 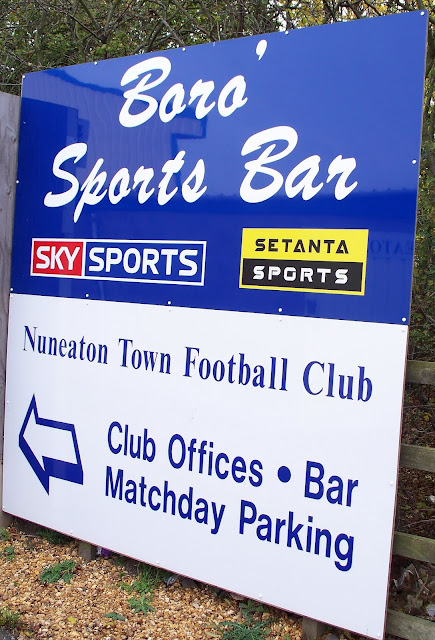 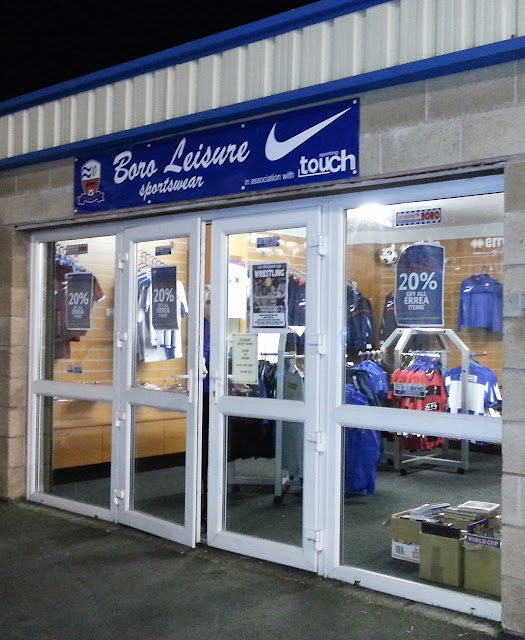 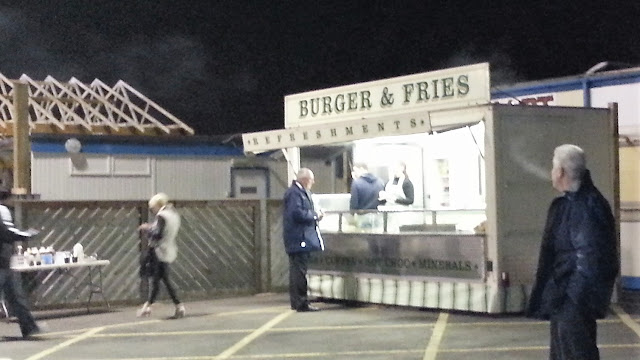 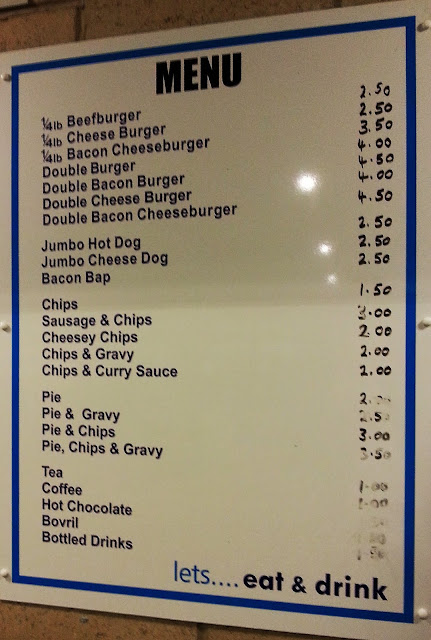 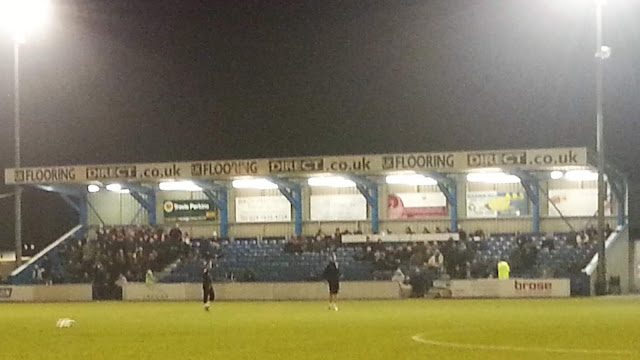 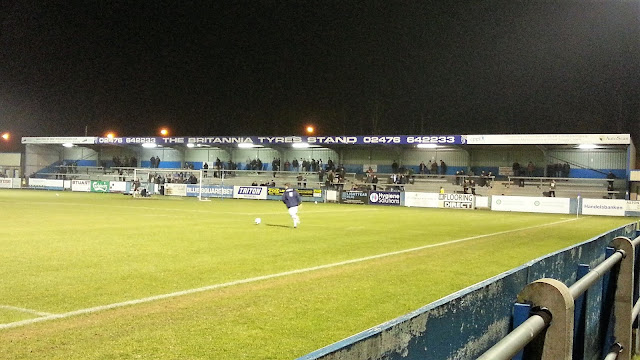 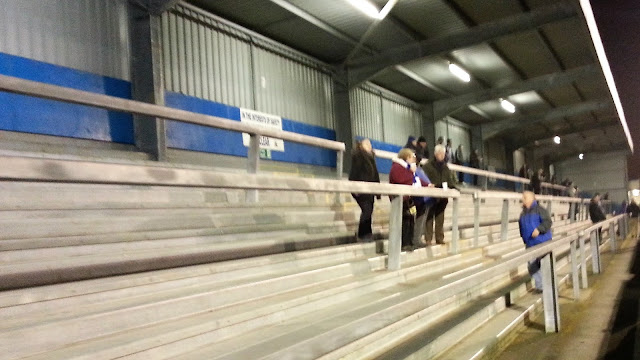 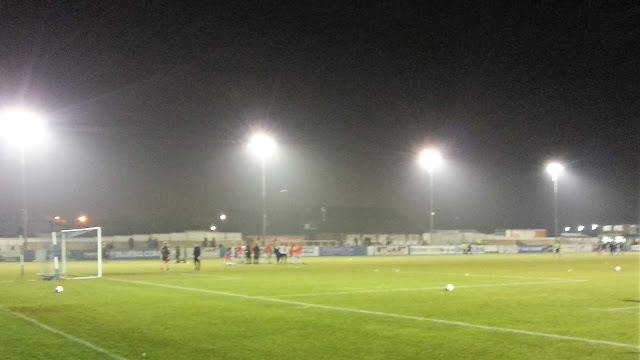 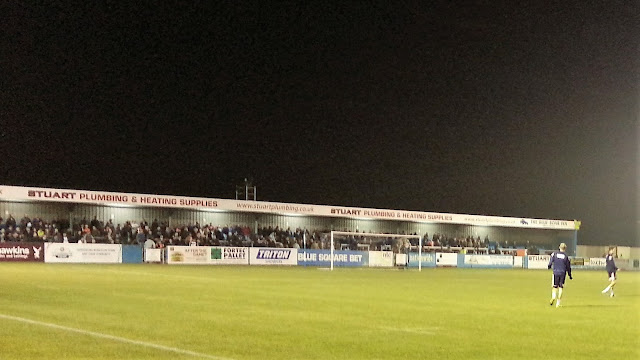