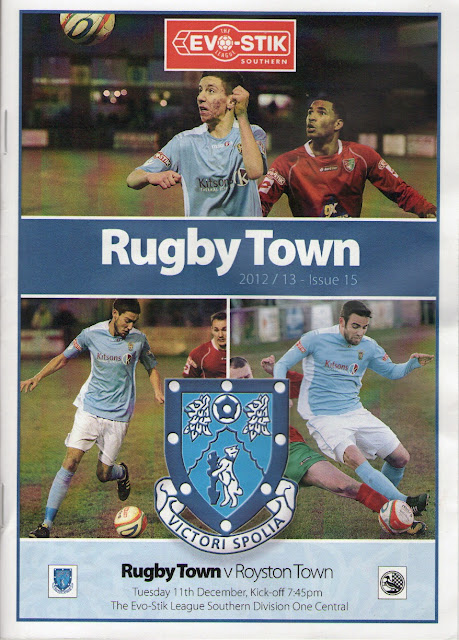 It was another Tuesday night without a Wycombe game and so I and my fellow groundhopping enthusiast were off somewhere random again. After getting the Non-League Paper on Sunday, the following options were drawn up:

In the end, we plumped for Rugby Town who compete in the Southern League Division 1 Central. They had a decent looking stadium and I later found out that there was an excellent pub in the town, called The Merchants Inn. I also read on Twitter that they were offering half-price admission to this game against Royston Town - that was if it was going to be on, which looked doubtful as all outside looked frozen. Though upon checking the weather, it was a whole degree warmer in Rugby than it was in Wycombe, so although I wasn't going to be packing the sunglasses and suntan lotion, it was at least a tiny bit better. There were pitch inspections announced all over the place, and I made sure I followed Redditch United and Woodford United on Twitter, as well as Rugby Town, so I could keep an eye on the situation. I also took a copy of the night's fixtures, in case all those were called off.

On the day I had some merchandising work to do at various stores, so had to leave early to allow time to complete this. So leaving just before 12 I went to Wycombe, along the A40 to Loudwater, onto Amersham and finally to Aylesbury where Anwar lived. My timing was pretty good as I finished doing my work and got to his place at 4.10PM, roughly the time we had planned to meet. An hour before that I had been on tenterhooks as with practically every non-league game in the country biting the dust, there was a pitch inspection at 3PM. I was delighted when it was on, and celebrated by buying some Millionaire Shortbread from Tesco. Not even the petrol being 2p more expensive than my local garage could put me in a bad mood - I only put £15 worth in as I might not have made it back otherwise. There was a short delay on our journey as we travelled through  Milton Keynes, but apart from that, it was plain sailing. We got to Rugby just before 6, and as previously planned, parked in a side road about 10 minutes walk from the Merchant's Inn pub. And it didn't disappoint, in fact, it was one of the best pubs I have ever been in. A choice of about 10 ciders, as well as loads of beers, on tap and bottled from all over the place. I'd estimate that there was a choice of around 200 there. I know that one of the main rail lines runs through there, so that is something that I will bear in mind if ever I am travelling by train. As I was driving I could only have 2 halves - namely Janet's Jungle Juice and Shaky Bridge, but there was so much choice I would need to visit many times to get them all done. At £3.80 for the pair, the cost was a tiny bit above average, but it really is worth paying for quality. The pub was very busy for a midweek night too, which shows that I'm not the only one that thinks this. Anwar settled for a soft drink, a shame he couldn't have driven really, I could have had more! 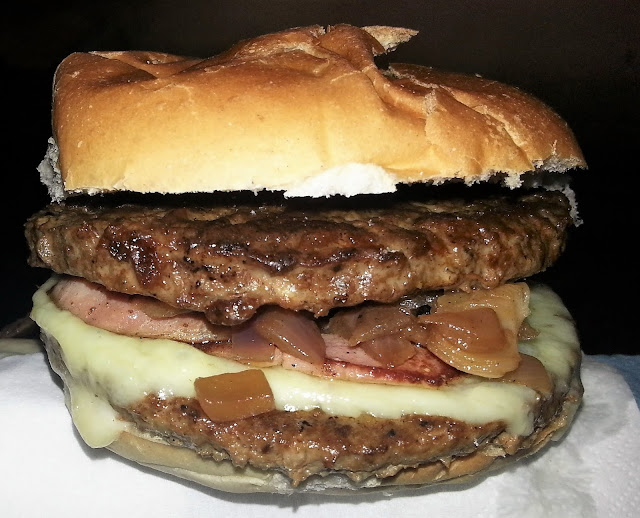 We left the pub at 6.45 and from there it was only a 5-minute drive to the ground. After walking to the car, parking up and going in, it was around 7.10. I paid £4 to get in (half price as promised) and £2 for a programme. I also picked up a pennant for £1.90 - cheap because it had their old name of Rugby United on it. The team have seen 3 names changes within very recent history before United and Town, they were known as VS (the VS stood for Valley Sports) Rugby. I was hungry by then, so I got myself some chips and gravy for £2, and then "The Famous Valley Double Bacon Cheeseburger" which cost me £4.50. We then went around the ground taking pictures, before settling into the covered terrace along the side of the ground for the first half. I can't recall seeing either team play before. Both were competing at the right end of the table. Royston had just come up from the Spartan South Midlands League, whilst Rugby Town had recently been in the division above. Neither team had any history with Wycombe in my time of watching them, but Rugby Town (or VS Rugby as they were known then) had been one of Wycombe's opponents along the way to the FA Trophy win in 1991, the season before I started to watch them. They also had former Wycombe youth teamer Sam Belcher, who had helped himself to 2 goals in the 2-1 victory over Chalfont St Peter on Saturday. This was part of a 6 match winning streak, the clubs best since 1993. Royston themselves had been on a decent run, their latest victory being over AFC Hayes on Saturday, 2-0 the scoreline. I also noticed whilst looking at their fixtures that the original game had been abandoned due to floodlight failure, maybe the reason for the half-price offer tonight. 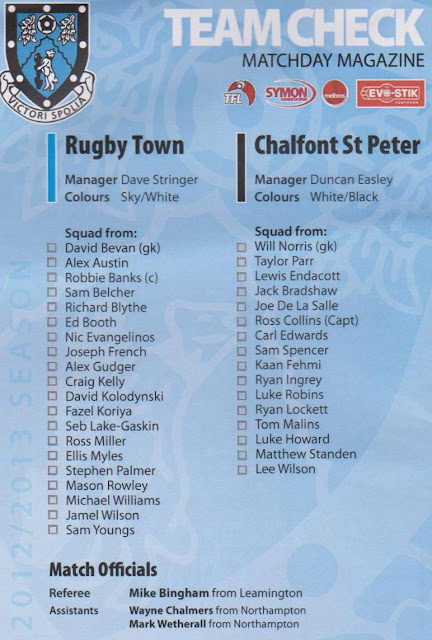 The game itself was pretty decent, Beforehand, Royston were top of the league, with Rugby behind in 4th. A win, however, could take the home side top. Rugby had the first real action of the game, as one of their players went down in the area. Former Wycombe player Sam Belcher stepped up, but despite getting 2 goals on the previous Saturday, he missed the spot-kick. His team were soon made to pay for his error as Ryan Lockett put the visitors into the lead with a long-range shot. But just before halftime, the home side equalised - Fazal Koriya netting from close range. I was peckish again at the interval, so I got some more chips, this time with sausages. That bought my tea bar spending up to £9, leaving me glad that I had saved on other stuff. We went and sat in the big stand for the second half which offered a great view of the action. Rugby had much the better of the second half and got their reward when David Kolodynski got the winner. He had caused Royston a lot of problems all night with his pace and was one of the best players on the pitch. So, yet another good nights football, despite the fog and the cold. And another new ground visited. It was a slightly quicker journey home. After dropping Anwar off, I was back home by 11.30. But with me getting up at 4 and not going to sleep till 1am, I was even more tired than usual in the morning. 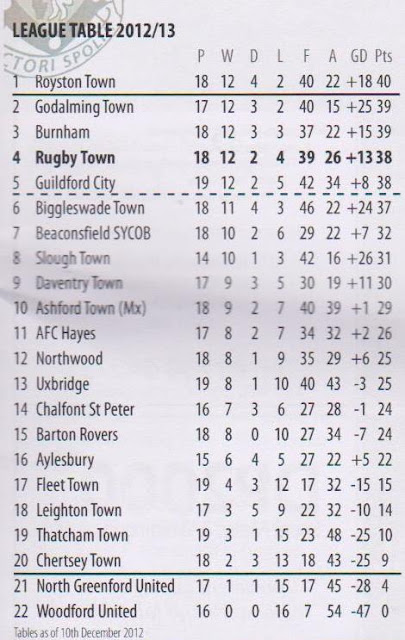 BUTLIN ROAD is a very smart non-league ground, especially for the step 4 level that the team are currently at. I previously visited the ground on the way to a Wycombe away game, hence the photographs in clear daylight The ground is covered on all 4 sides and could easily be a Blue Square North level venue, if not the Blue Square Premier. There is cover on all 4 sides, with the most impressive area being the main stand which offers a great view as it is so high. Opposite that is a smaller seated stand with covered terracing either side. To the left as you sit in the main stand is the best terraced area, which wouldn't look out of place in the football league. Finally, to the right there is a smaller covered terrace. The rest of the ground is open terracing.

There is a table as you come in the turnstiles that acts as the club shop, and although the range is quite limited, the stuff looks good and is sensibly priced. A hat and scarf together for example is £10. The tea bar is also good, with a better range than most. Finally, the bar, which has Sky Sports is nicely decorated. Nothing really special on the drinks front, but if you have the spare time, the town is a 20 minute (brisk) walk away and this has a number of pubs to suit all tastes as well as takeaways. As I tidy up this blog six years to the day in 2018, its certainly a place I would like to revisit, most preferably on the train. 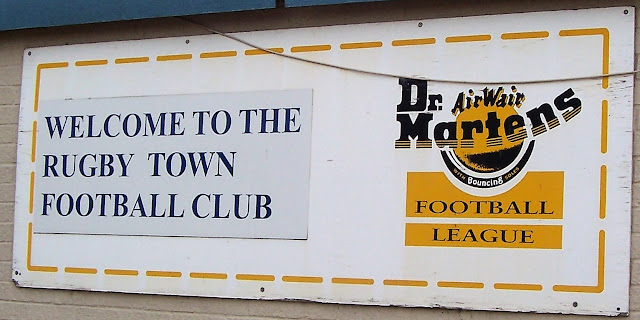 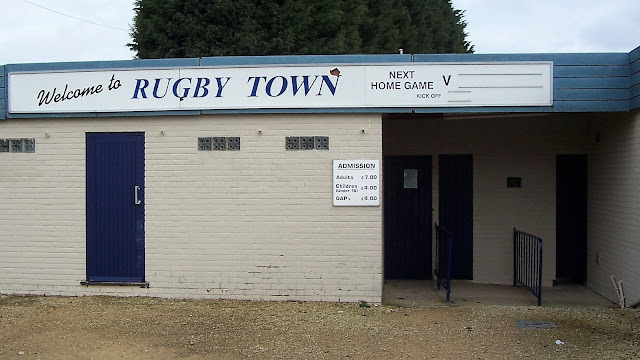 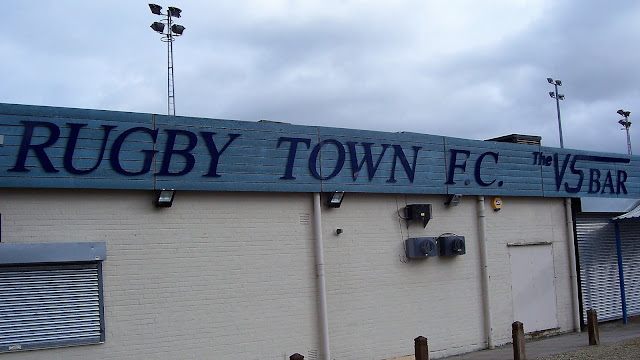 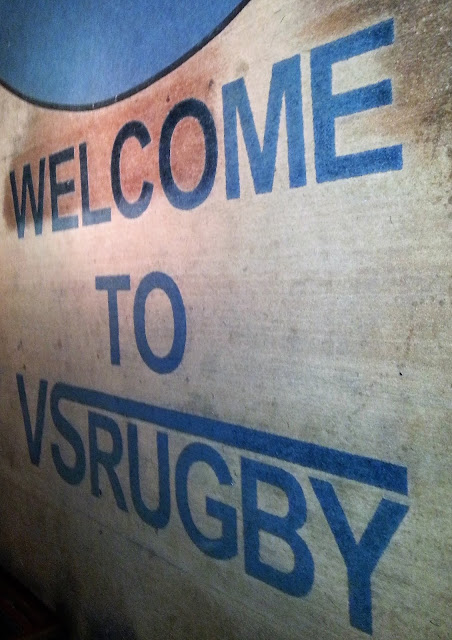 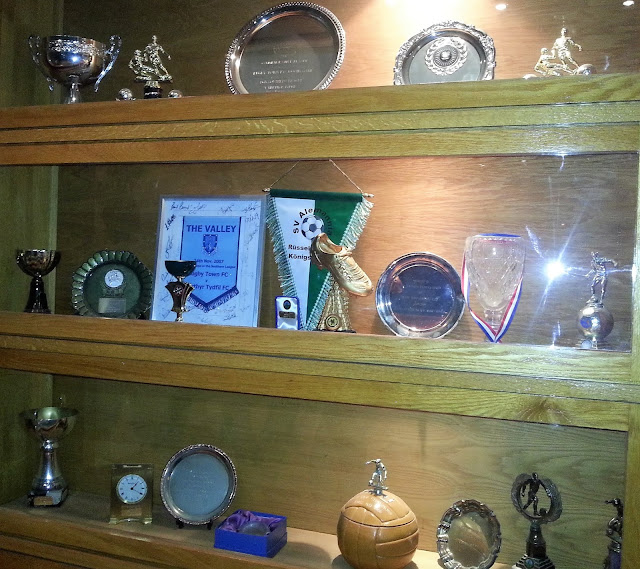 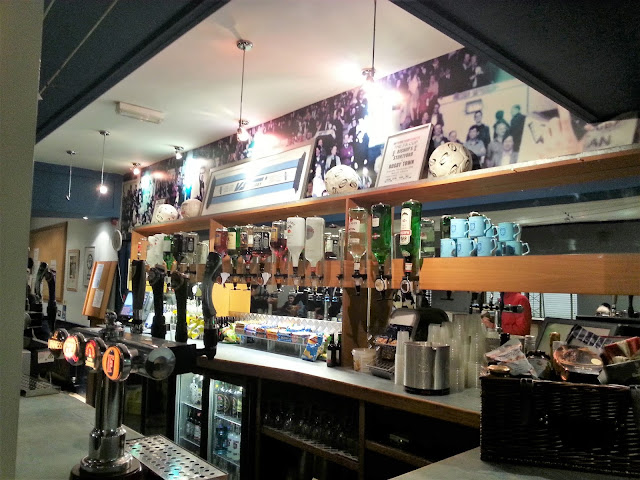 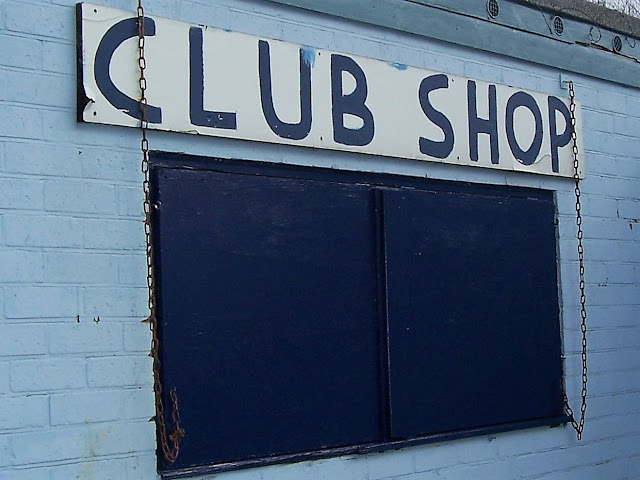 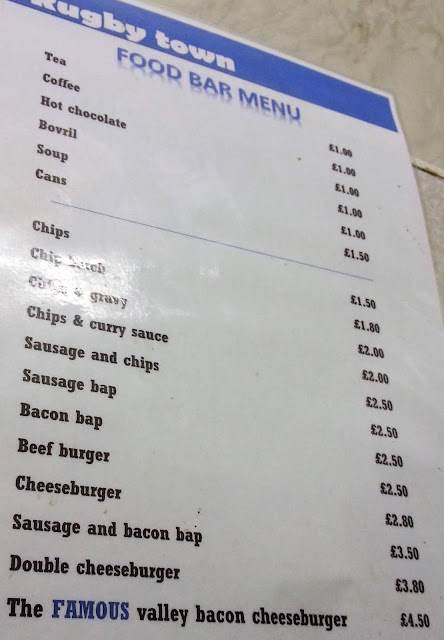 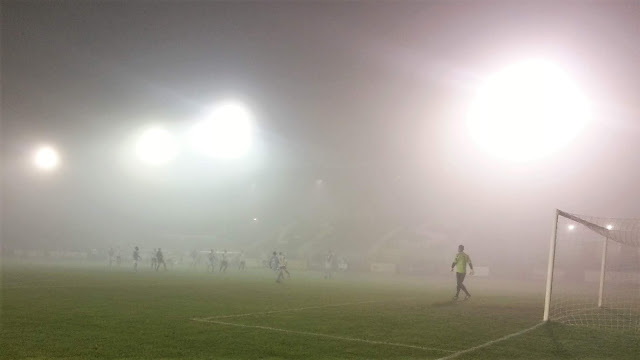 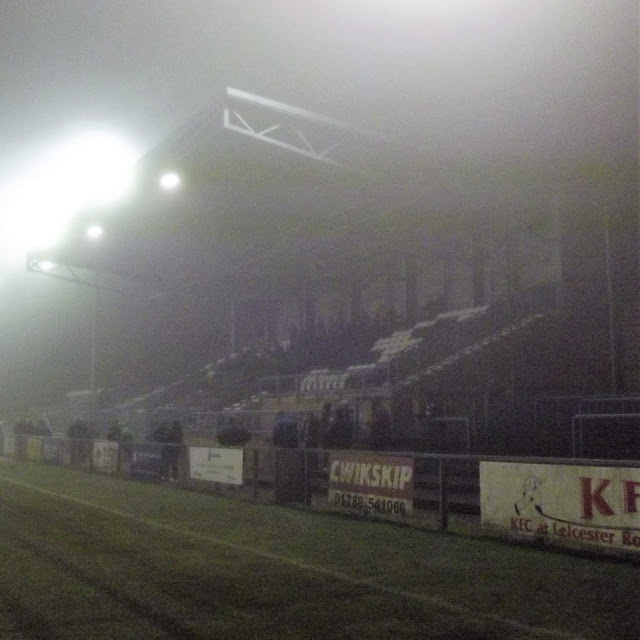 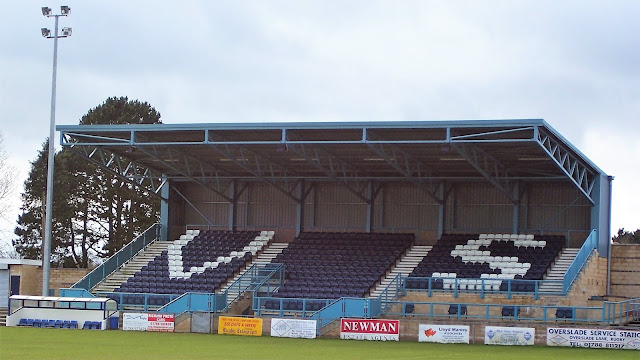 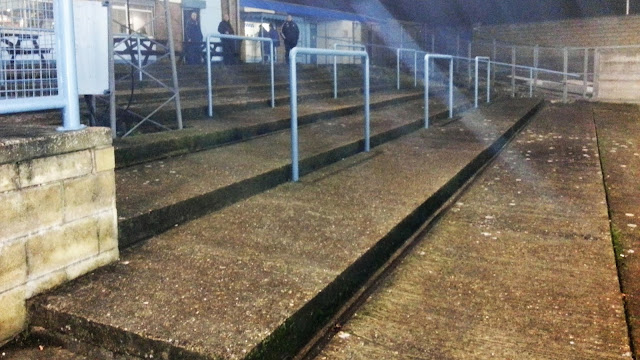 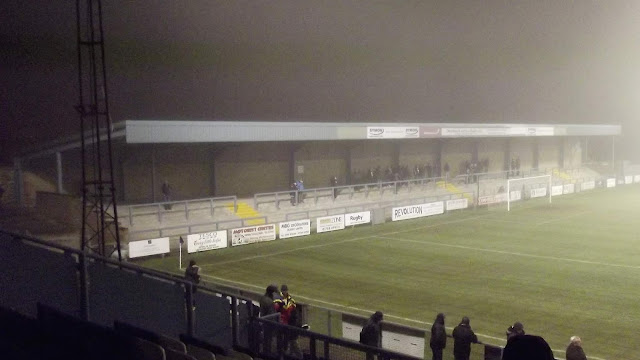 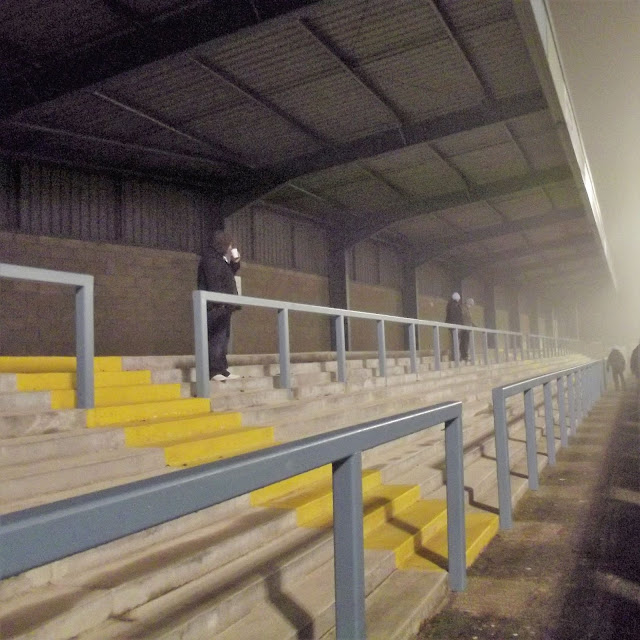 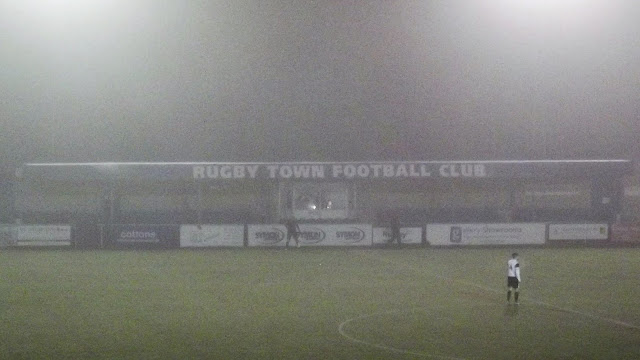 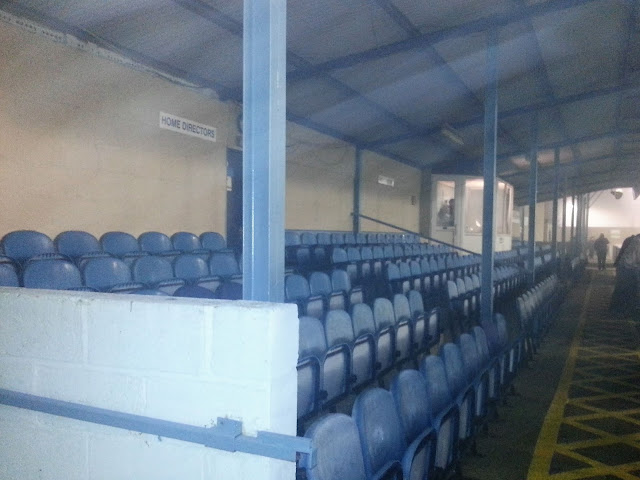 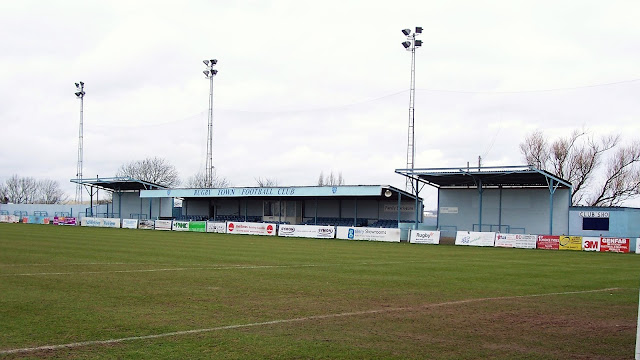 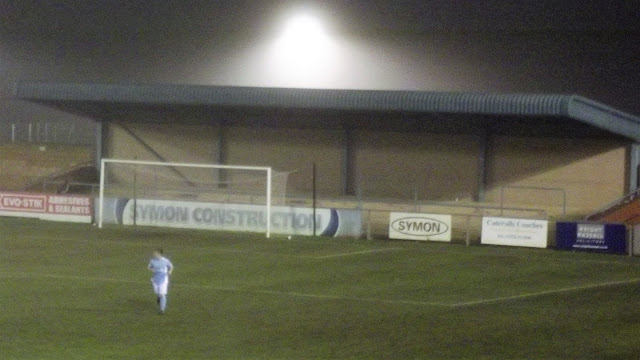 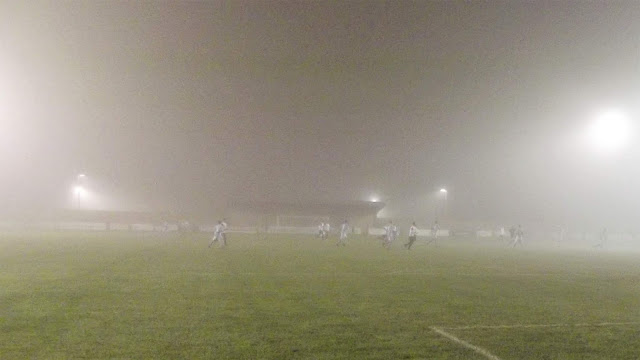 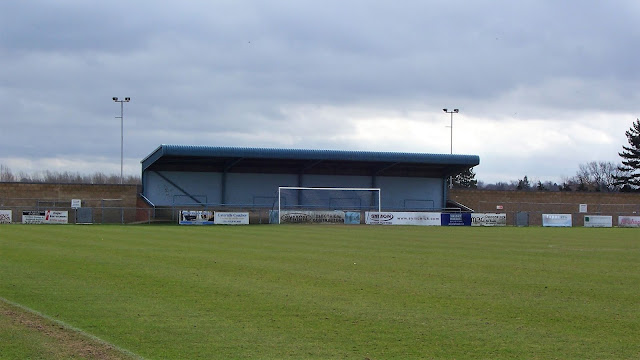