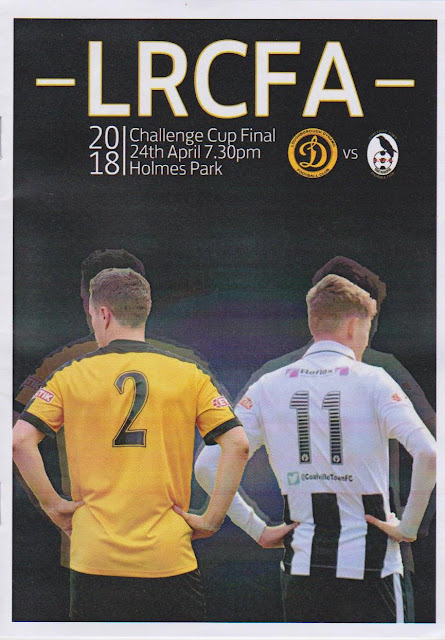 This competition was first played in 1887/88 with the first final won by Shepshed as they defeated Mill Hill House 8-0 in a replay. Leicester City (or to be more accurate their reserve side) hold the record for the most wins with 25 although they have not played in the competition for many years and last won it in 1950. More recent times have seen the trophy won by a large variety of clubs with one of tonight's finalists being one of only two teams to win it more than once since the turn of the millennium (incidentally their only appearances in the final). They last won it in 2004, beating Downes Sports in the final, having also won it the previous year, beating Barrow Town. They got to the final by beating Ashby Ivanhoe 3-2, Aylestone Park 1-0 and Shepshed Dynamo 4-1.

Coalville Town would be appearing in their tenth final, although they have only won two of those clashes - beating Holwell Sports in 2000 and Leicester Fosse Reserves in 1907. They got to the final by beating Leicester Nirvana 6-1, Leicester Road 4-1 and Barwell 3-2. All teams in this seasons competition came from steps 4-6 of the non-league and features teams exclusively from Leicestershire. For whatever reason, Rutland's sole representative at this level, Oakham United, did not enter, despite being last season's losing finalists. For the last 5 years, the final has been played at Holmes Park, the home of the Leicestershire FA and this season, it also hosted the two semi-finals.

This game was decided whilst myself and Anwar were at Totternhoe last week. The fact that it was one of the closest to home appealed, as did the fact that it was originally a 7pm kickoff. The kickoff was put back half an hour which meant that we wouldn’t get home as early as I’d hoped. It was still a cup final though and a decent looking game, so we stuck with it. I did my research into the history of the cup, as well as looking at options for dinner. There was a takeaway near the ground, but it was quite expensive at £6 for a basic burger meal, so I planned in a visit to Morrisons in Lutterworth where we could get a sit-down meal. It was my usual Tuesday off on the day of the game and I was glad to get a good night’s sleep for once, waking at 8.45. After a quick breakfast, I got dressed and went down town, getting my hair cut and getting some shopping before meeting my Dad. The afternoon was spent at home, looking online and catching up on some TV. I left at 4, meeting Anwar In Aylesbury at 4.30 and soon enough we were on our way. There was around 15 minutes delay getting through Milton Keynes as if going through there wasn’t unpleasant enough as it was. For once, though, there were no delays on the M1 and we got to Morrisons in Lutterworth at 6.05. I was eyeing up a toastie and chips for £4, but were told that they had closed at 6. Presumably, they don’t eat evening meals in Lutterworth as every other Morrisons cafe closes at 7 or 8. We had to make do with stuff from the shop and I got some chicken for £2.50 and some drinks. After eating our dinner in the car park, we headed for the ground, getting there at 6.50. 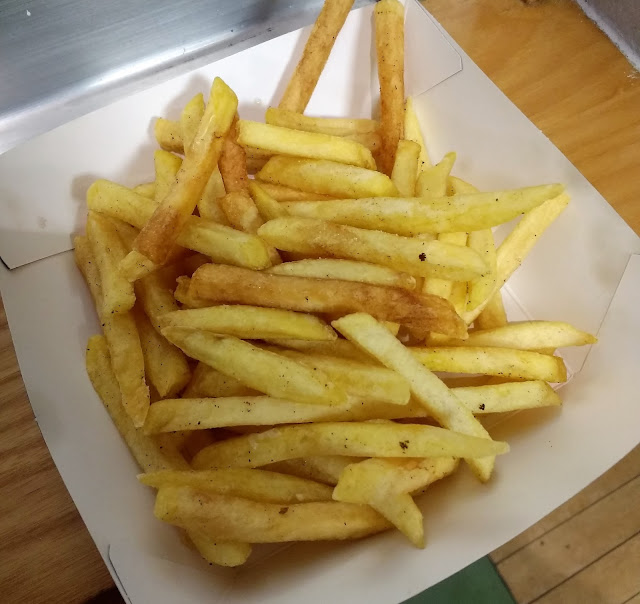 There has been a number of games called off nearby, but fortunately, ours had survived the rain. Entry was a reasonable £7 including programme and after paying to get in we went and sheltered in the bar. I was still fairly peckish, so I got myself some chips for £2. Though the portion was decent enough, they weren’t very nice, having been stored in the hot cabinet for too long. I caught up online as we had more time than expected, due to another delay to the kickoff, due to traffic, the match now kicking off at 7.45. We went outside and got photos and then yet another delay was announced, the match now kicking off at 8. I’d seen that there had been warnings about roadworks due to works on gas mains and as with anything in this country, it takes ten times longer than it should as there are no penalties for delays. 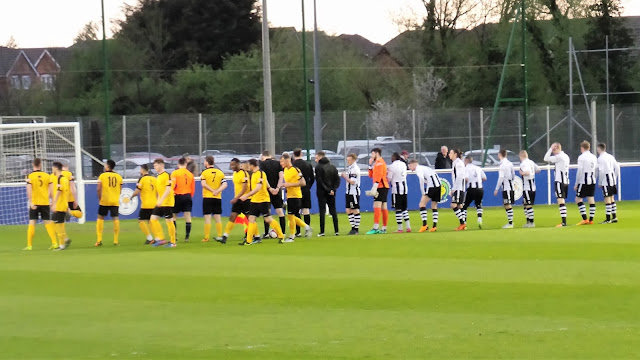 The match eventually started and Coalville were making the early running. However, it was Loughborough who opened the scoring, a ball was put across, cut back and Karl Demidh was there to fire home from around 8 yards out. This led to a spell of pressure for Loughborough and they had a chance to make it two which was not taken. Coalville got the equaliser on 15 minutes, a penalty was awarded for a trip in the area and Nat Watson fired low to the keepers left to make it all square. The Ravens then had a speculative shot from Dan Creaney go just wide as they sought to establish an advantage. The game flowed from end to end and there were a good number of chances for both sides. The goal that re-established Loughborough’s lead on 38 minutes was debatable, Coalville looked to have cleared but the linesman adjudged that Ash Hodgkinson’s shot had crossed the line. Again, Loughborough nearly scored twice in the matter of a minute but a great last-ditch tackle from Steve Towers kept Coalville in it. This proved imperative, as on 42 minutes, it was all square, the Dynamo keeper was only able to get a hand to a shot and Creaney had his second. The scores were level at halftime and the second half, although keenly fought, saw far fewer chances than the first period. With the scores still level at full time, the game went to a penalty shoot-out, thankfully avoiding extra time on what was becoming a much later night than planned. Coalville blasted their first penalty over but recovered to win 7-6 on penalties. I got most of it on video and it had been a dramatic end to a good game that had been excellent in the first half but faded in the second. 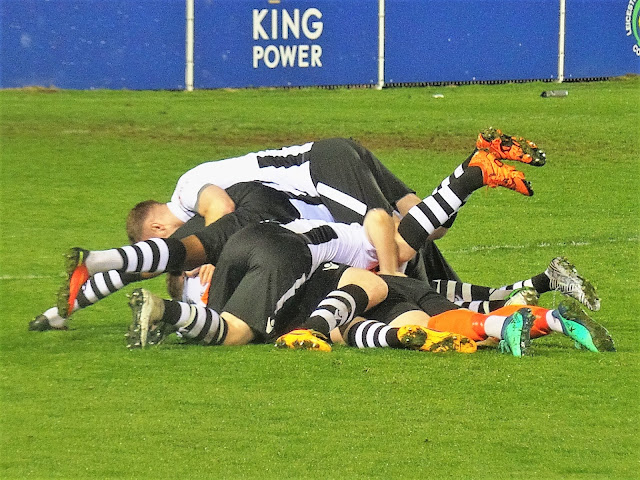 It was 10:05 by the time that we finished and I wanted to get home as soon as possible. I've had problems with wildlife damaging my car by running out in front of me and giving me no chance to stop and after months of not encountering any, they were back with a vengeance tonight. First, on the road back to Lutterworth, a fox ran out but gave me plenty of time to avoid it thankfully. Then, back in Bucks, there was another fox successfully avoided before a few hundred yards down the road, a deer just laying down in the road. Again, it was avoided with ease, which meant a clean bill of health for my car. I listened to various things on the radio on the way back notable football results including Liverpool's 5-2 win over Roma in the Champions League, though they had been 5-0 up at one point. Lincoln also won 4-2 at Coventry in League 2 to keep in touch with Wycombe at the top, while Dunstable won 2-0 at Biggleswade to give them a big boost of survival ahead of my revisit there on Thursday. I dropped Anwar off at 11.25, getting home 25 minutes later and going to bed as quickly as I could with work at 4 am in the morning.

Homes Park is a smart and well-kept venue, though it is a bit isolated. There's only a Co-Op supermarket nearby that I saw and parking was pretty limited. At the ground, facilities are OK and reasonably priced, if not exceptional. The ground itself looks fairly decent, though the standard metal stands take away from it. At least there is plenty of cover, even though too much of it is seating and not standing.

1: Ground facilities & condition (for the level)
Smart and well kept, if a little bland. (6)

2: Area around the ground (parking, food/drink, public transport)
A bit isolated, not much parking (4)

4: Value for money
£7 with a programme was reasonable (7)

5: Social Media & Website
Kept us up to date with things (7)

6: Programme
Thin and little to read, but was free (5)

7: Game entertainment
Excellent first half and dramatic ending, the second half wasn't as good (7) 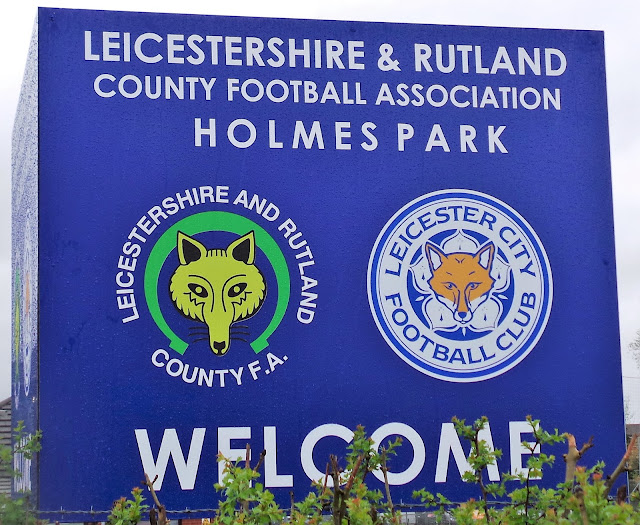 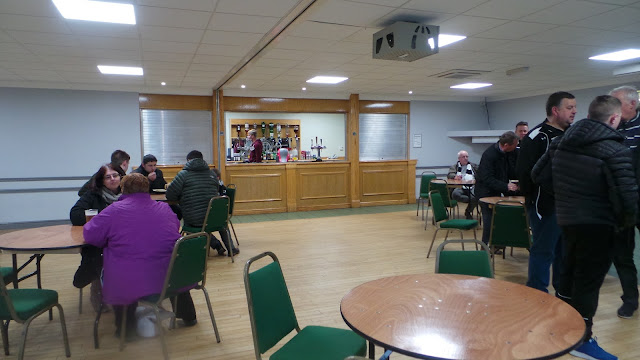 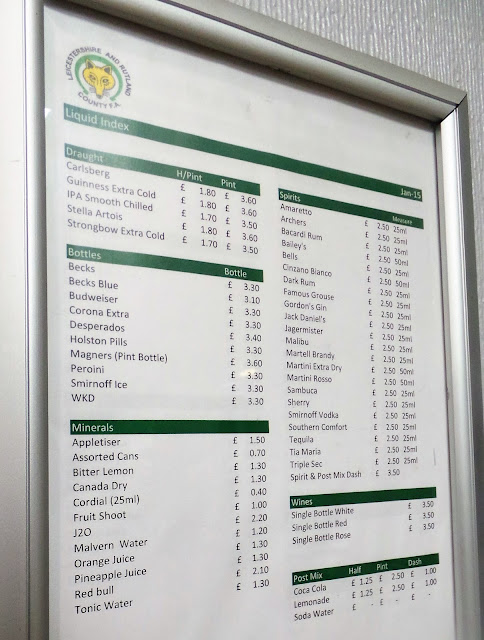 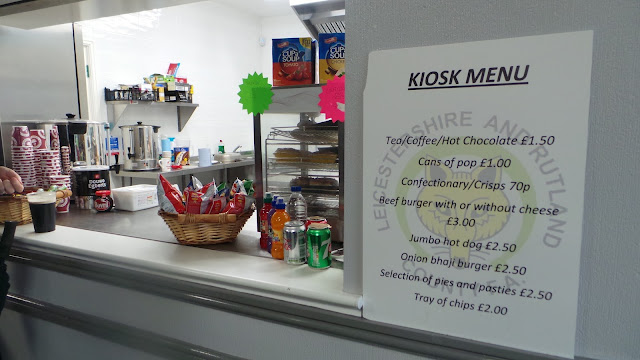 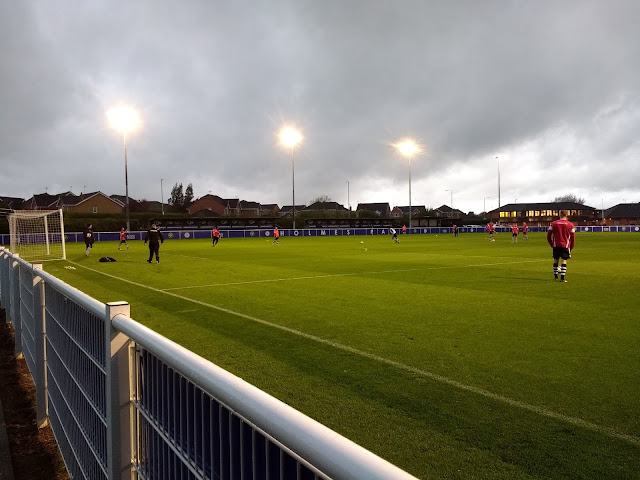 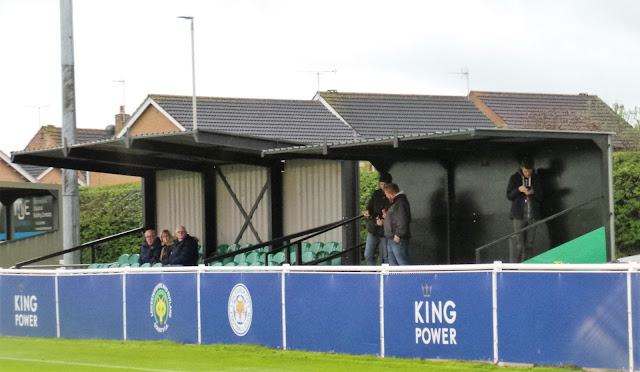 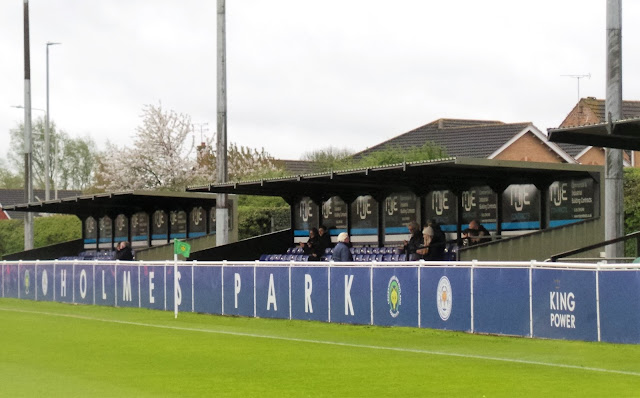 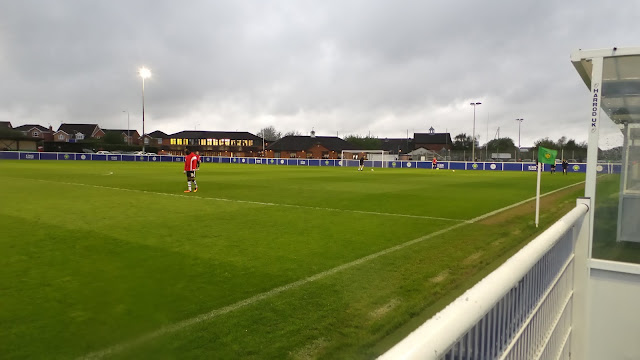 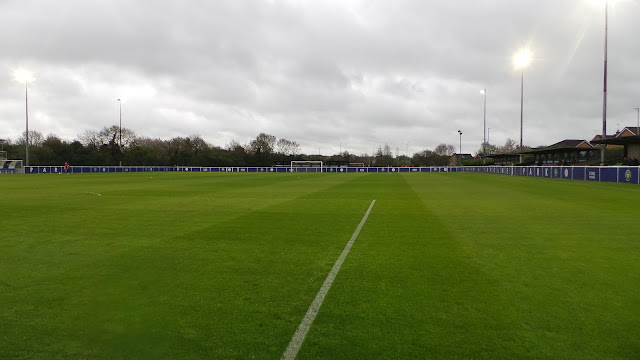 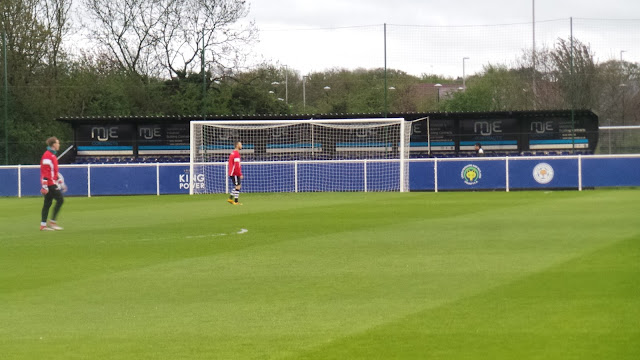 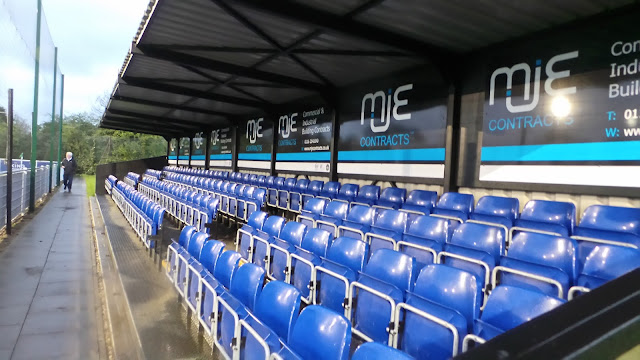 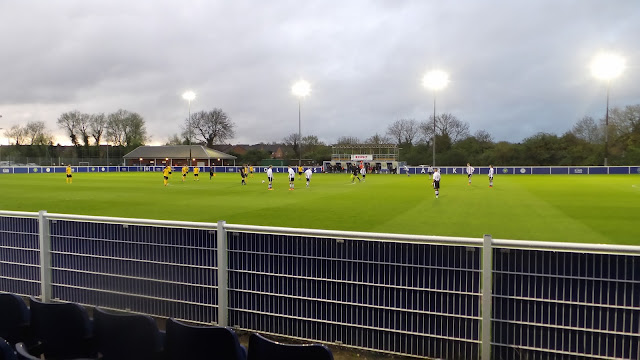 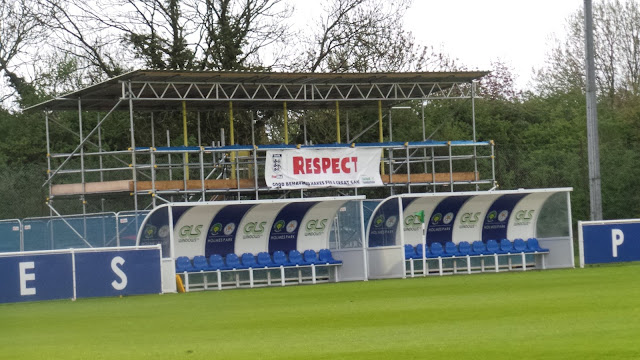 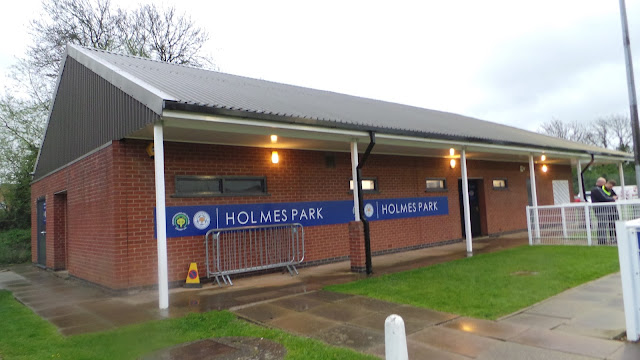