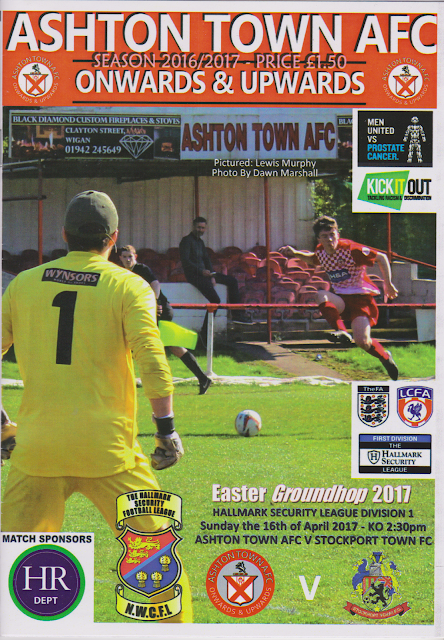 The club was formed in 1953, making them the oldest of the two Ashton clubs. Initially known as MAKERFIELD MILL, they played in local leagues such as the Wigan Sunday School League, St Helens Combination, Warrington League and latterly the Lancashire Combination. That competition was absorbed into the newly-formed North West Counties League in 1982 and Ashton Town have been ever-present members since its inception. Starting out in Division 3, they had their best ever season at this level in 1984 when they finished 3rd. The league was restructured into two tiers in 1987. They've been in the second tier ever since, with their best finish being 6th which they achieved in 2013. This season has been hugely disappointing with the side sitting bottom. Their only chances of survival will be if they finish second-bottom above Eccleshall and there are not enough teams to come up to fill the league for next season.

Ashton Athletic's only win in the FA Cup game came in 2007. In a game played at Atherton Collieries, they beat Ramsbottom United 4-2 before losing 3-0 at Cheadle Town in the Preliminary Round. The FA Vase 1st Round has been reached on three occasions, this season being the latest as they went out 4-0 at home to Billingham Town following decent wins over Parkgate and Barnton. Locally, the club won the Liverpool FA Shield in 1957, the Wigan Cup in 1961, the Stubshaw Cross in 1967 and the Atherton Charity Cup in 2013. Their record attendance of 1,865 came for a game against FC United of Manchester in 2007. 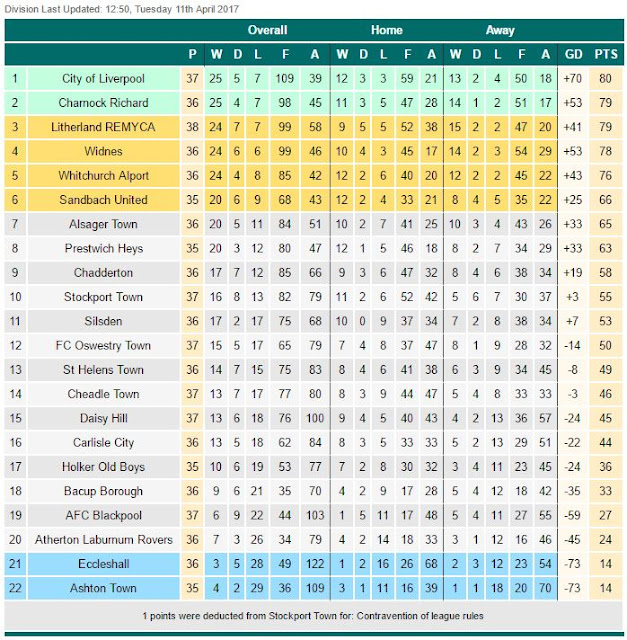 From my previous game at local rivals Ashton Athletic, it took 15 minutes to reach Ashton Town, thanks to a road closure. I was happy to still have 55 minutes left until kick-off, so after going in, I went to the bar for Strongbow which was £2. I was peckish by now and so went to the hatch serving food to get some lunch. I had to wait a fair bit to get my pie, along with many others. This was due to them being advised that 'groundhoppers will be sick and tired of pies' and to do something different. Whilst this would normally be decent advice sometimes, you should never underestimate the popularity of the humble pie. Especially when it came in at the bargain price of £2 including chips. The minced beef and onion one was worth the wait, cooked well with some nice chips, although it could have done with a bit of gravy to be honest. 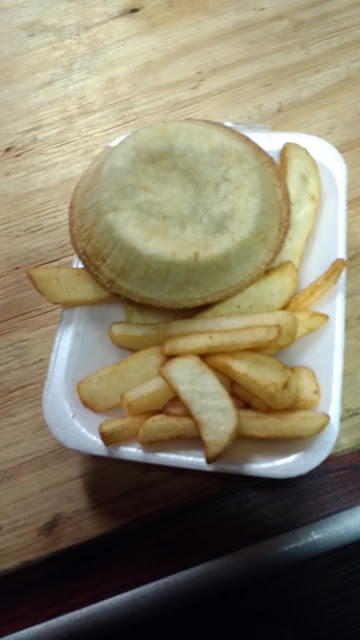 The game started as you would expect and with Ashton sitting bottom, mid-table Stockport Town started well in control. They took the lead on the half-hour thanks to a penalty from Ben Halfacre which was awarded for a bad tackle. This led to a delay due to treatment but the spot kick was well taken and gave the visitors a deserved lead. Ther hosts did have a brief good spell at the start of the second half, but they failed to put away any of the chances that were presented to them. The balance of play was soon restored and the visitors lead was doubled on 57 minutes. It was Ben Halfacre again as he headed home an excellent cross to seal the three points for his side. 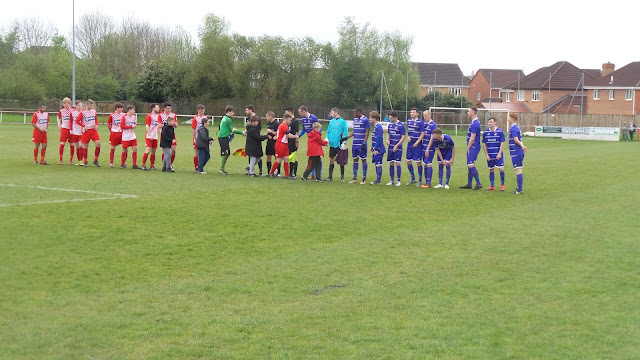 I moved on to a revisit to the third game of the day at Runcorn Town. It was a decent game and a comprehensive win for the hosts against Barnton. The game included a great acrobatic effort for the hosts. It was also a good opportunity to get some pictures of an adjacent derelict ground that was once home to General Chemicals (later to become Halton FC) which made the revisit worthwhile. I got back to my hotel in Widnes at 8. The Main Top Hotel had some very mixed reviews on TripAdvisor, but it turned out to be decent. I'd not got as much of my blog done as I'd wanted to on this trip, so I was sure to get my Armthorpe Welfare one uploaded. After that I went down to the bar to have a few pints before returning to watch Match Of The Day. I fell asleep around 11.30, hoping to get a good night's sleep before the following days 3 games. 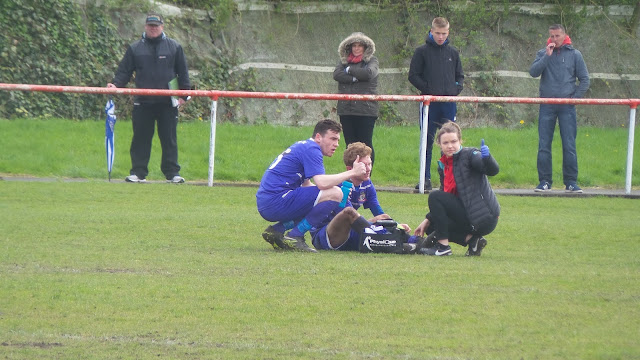 EDGE GREEN STREET is a nice place to watch football and has a reasonable bar plus good food options which is just as well as it's in a mainly residential area. The ground is maily open standing, though there are a couple of stands on the far side. Refreshingly, these are solid structures rather than the modern trend of sticking in a metal one for a quick solution. These 2 stands provide good views in a mixture of sitting and standing and are nice to look at. 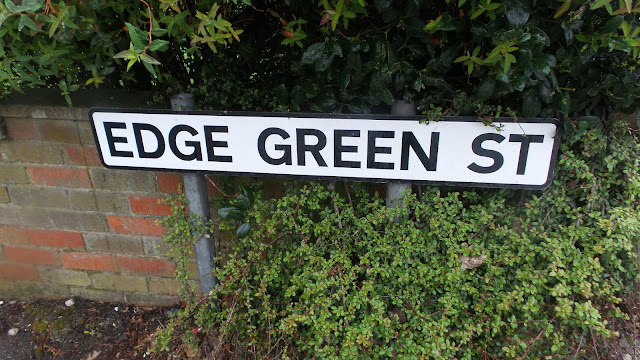 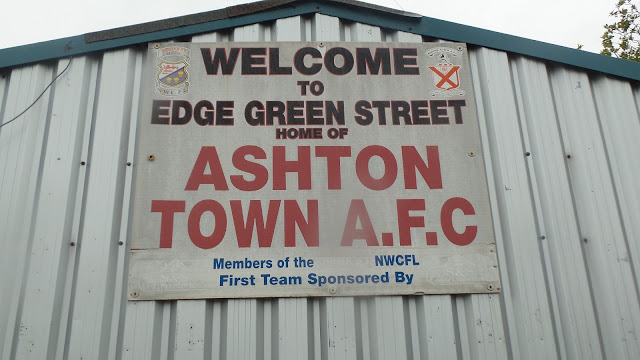 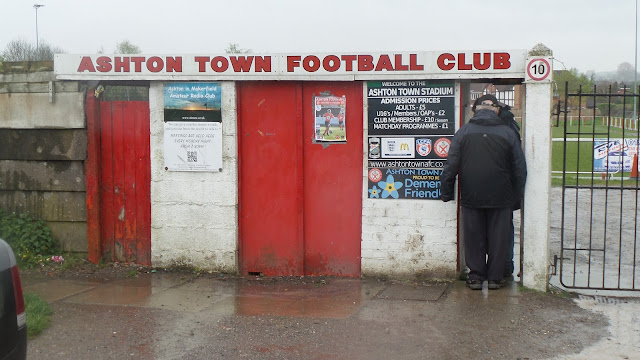 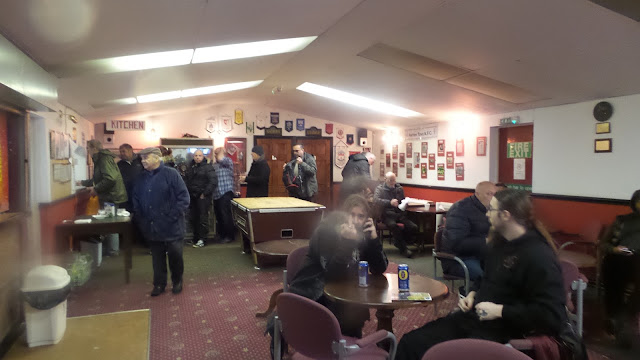 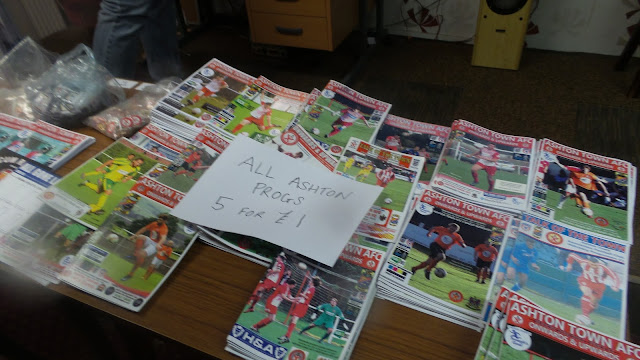 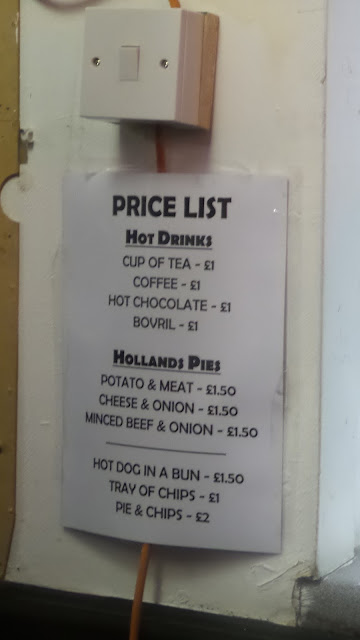 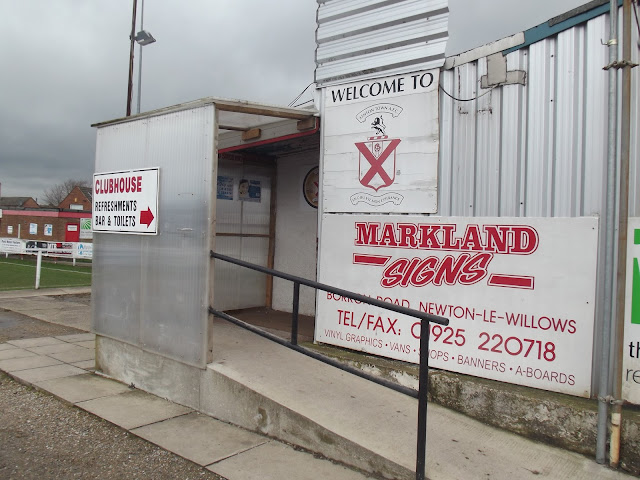 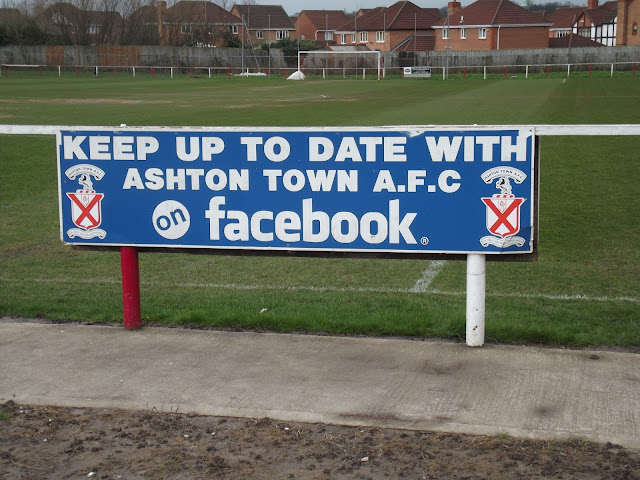 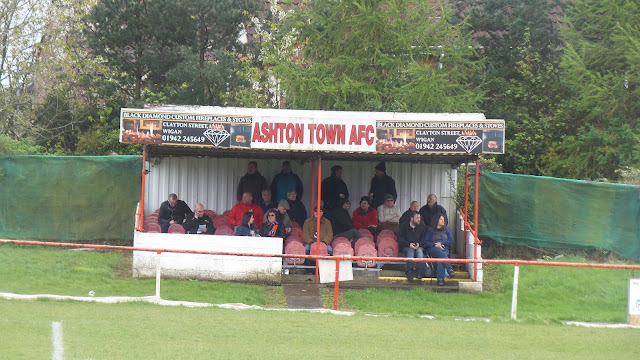 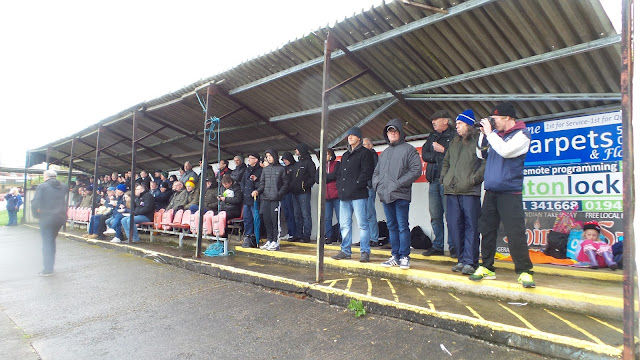 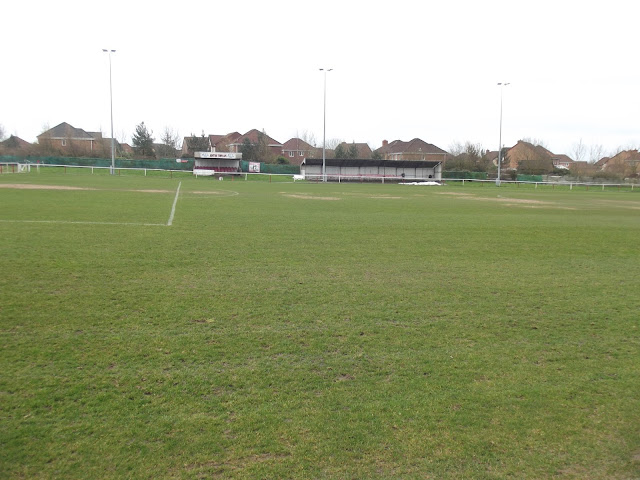 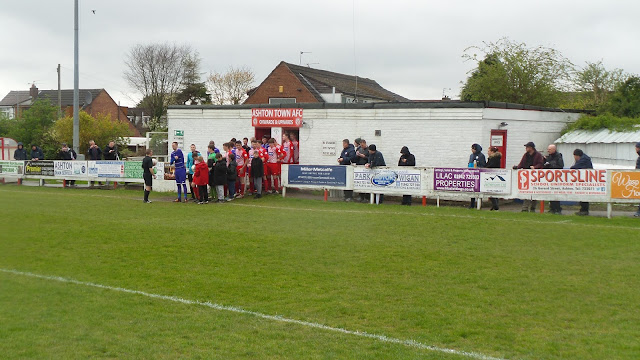 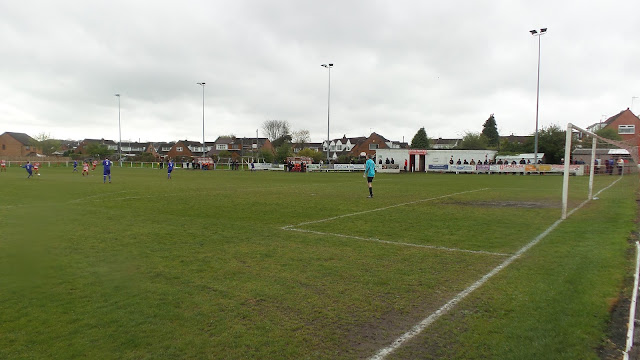 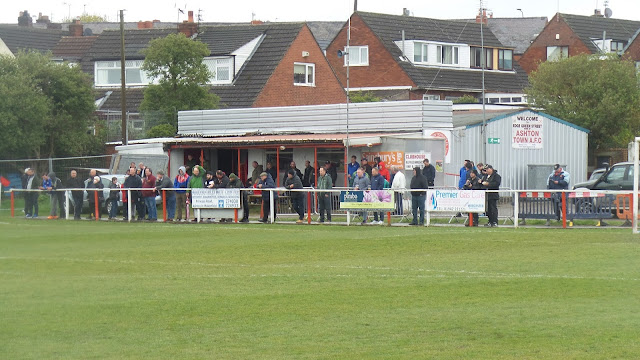 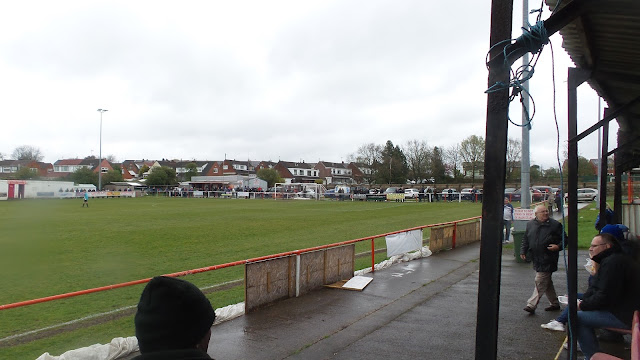 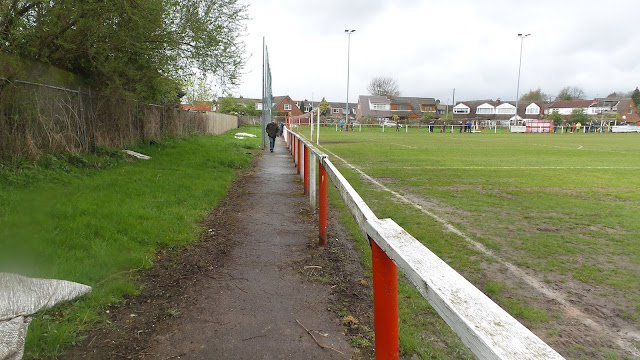