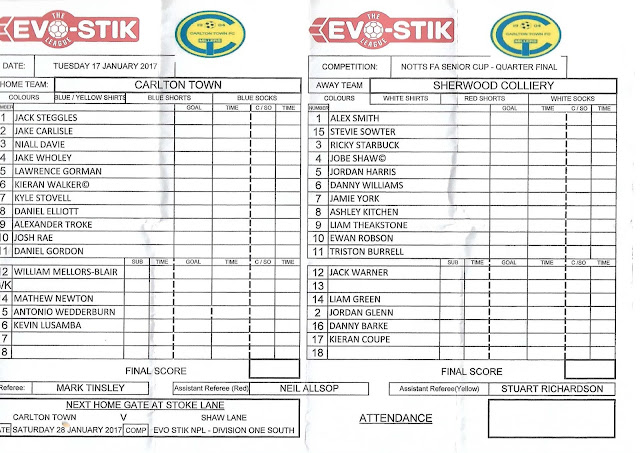 CARLTON TOWN were formed in 1904 under the name SNEINTON FC. They changed their name to their present one in 2002 by which time they had progressed through the Notts Alliance and Central Midlands League. In their first season under their new name, the won the latter's delightfully named Supreme Division and progressed to the Northern Counties East League, starting in its Division 1. After finishes of 9th and 3rd, they were champions in 2006 and the following season, third place behind Retford United and Sheffield was good enough to see them promoted from the Premier Division. Since that time they have been in the NPL Division 1 South with their highest ever finish coming in 2012 when they were runners-up. However, they lost in the playoff semi-finals to Leek Town, having fallen at the same hurdle three years previously when they lost to Stocksbridge Park Steels.The last couple of seasons have seen them struggle, with two consecutive 18th place finishes and a similar season this time sees them sitting in 19th place at present. 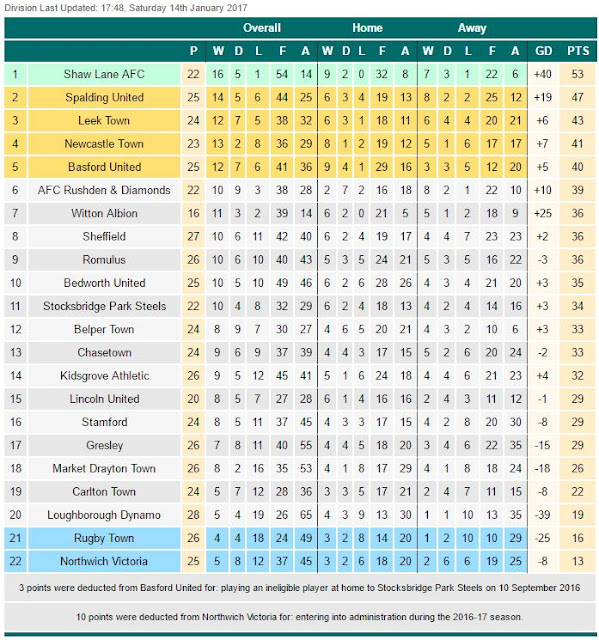 The club's best-ever progress in the FA Cup is the 3rd Qualifying Round - a feat which they achieved in 2012 (losing to Bradford Park Avenue) and 2013 (losing to Vauxhall Motors). In the FA Vase they reached the 3rd Round in 2005/06 before losing an epic game 4-3 to local rivals Gedling Town. 2009/10 saw their best run in the FA Trophy, reaching the 2nd Qualifying Round before losing to North Ferriby United. In terms of local cups, Carlton Town won the Notts Senior Cup in 2013, defeating Rainworth Miners Welfare 6-2 in a game played at Hucknall Town's Watnall Road ground. 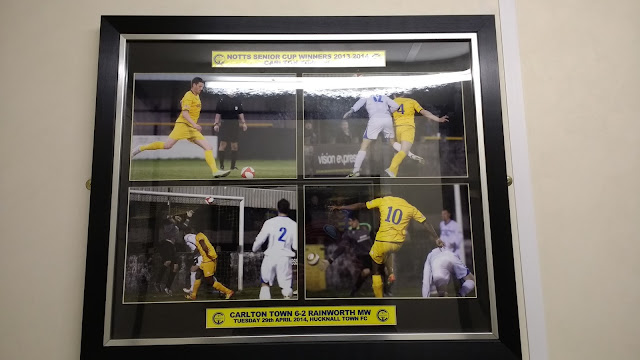 There were 17 options for this Tuesday's groundhop, though one of them, Cinderford Town would almost inevitably be off due to the weather. It was a shame as it was the one I really wanted to do as it would complete the Southern Premier for me. But with the weather scheduled to be cold and wet, I wasn't going to get my hopes up, even though my blog was half-done for that ground. I even had three 3G backups in the case of the weather being really bad, though with two of them - Eastbourne Borough and Hamworthy United, involving a lengthy trip round the M25 in rush hour, it was something I'd rather avoid. I was glad of my usual day off on the Tuesday, as work had not been good. The recently appointed boss had adopted a new way of working, which for my job meant that everything took twice as long. I had to stick to it though, as I was warned I'd face disciplinary action if I didn't. As a result I was not enjoying my time at work one bit. As soon as home time came, I was out the door with no overtime worked. A number of my colleagues felt the same, and in footballing parlance, I believe he has 'lost the dressing room'. I did consider trying to cheer myself up by going to Chelmsford City v Braintree Town in the Essex Senior Cup Quarter Final on the Monday night. It would have been a good chance to see my Braintree supporting mates, but at a ludicrous £13 entry for what amounted to a reserve team game, I gave it a miss. On the day of the game I woke up at around 5 am, which was most annoying when I wanted a lie in. I spent the tine getting together a Twitter list for tonight's game to give me an easy way to keep an eye on potential postponements. I walked down town, but not before discovering that one of my options at Birstall United was already postponed. After coming back and having some lunch, there were further postponements, with six games falling victim to the weather, and just Carlton Town and Market Drayton Town confirmed as on. I phoned fellow hopper Anwar and we decided on the former as it was quite a bit nearer. 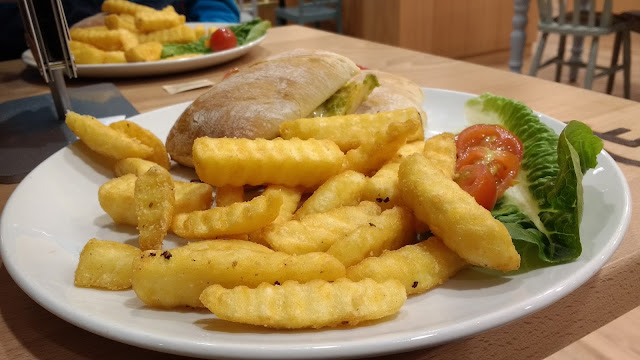 I left at 3.30, meeting Anwar in Aylesbury at 4pm. Anwar had heard about an accident on our usual route, so we had to go cross-country to avoid it. What with those slow roads and the usual palaver on the M1,  we didn't get to Nottingham until 6.40, after half an hours delay. Dinner was at Morrisons Cafe a mile from the ground where we both had Mozzarella and red pepper Panini with chips for £3.90. Initially we thought it was going to be a bit of a pain with them saying that they were closing and had hardly anything left. However, we both got our first choice, and it was very nice and freshly cooked too. From there we drove the mile to the ground, arriving at 7.15. Paying a well-priced £5 to get in, I found there was no programme as 'the printers had not delivered them' I wasn't that bothered though as I am rapidly running out of space. The club were very welcoming and friendly, even opening the club shop for me when they saw me looking through the window. As they had been so helpful I bought a pen off of them. At £3 it was more than I was used to paying, but it was a nice metal one, a lot nicer than the usual plastic biros that are sold. 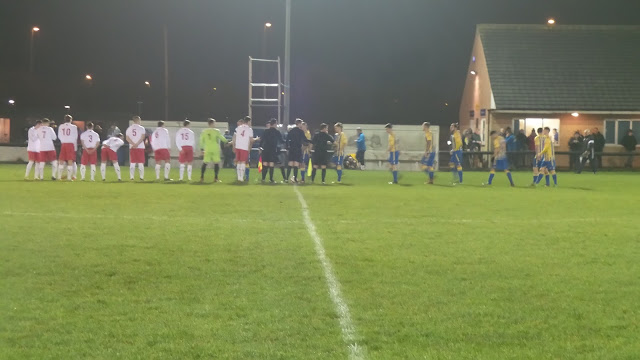 For the game we stood on the far side at first. There we saw some other hoppers, including Malcolm, who I had been chatting to recently on Twitter. He runs the useful and entertaining On The Road Blog which I'd have turned to for alternative games should tonight's game have suffered a late postponement. It also provided me with a scan of the teamsheet that I'd missed out on and the names of the scorers which I was unsure about. As for the game, Carlton Town fielded a full first team according to my sources. But it was step 7 Sherwood Colliery who were 5th in the Central Midlands League South that were much the brighter side early on. They took the lead on 4 minutes - a low cross was put in, a save was made following a sliding shot and Triston Burrell was on hand to drill the rebound into the net past home keeper Jack Steggles. It was a fully deserved lead with the visitors well on top, though Carlton did come back into it later on. Sherwood Colliery looked to be home and dry when Danny Williams netted from another cross on 78 minutes, but they were starting to tire. The hosts were given hope when Danny Gordon fired home from an acute angle on 82 minutes and from then on they threw everything forward. In the second minute of injury time, the ball was bundled home by Josh Rae. It was chilly by now, so I moved behind the goal to keep warmer. An unremarkable first half of extra time followed and it looked as if we might be heading for the drama of penalties to warm us up. However, 9 minutes from time Laurence Gorman netted from an excellent corner to give the hosts the win and set up a semi-final at home to Teversal. I caught the goal on video and have put it below on my Instagram post.

Carlton Town go 3-2 up in extra time against Sherwood Colliery. 6 minutes to go in the Notts Senior Cup Quarter Final
A video posted by Russell Cox (@russ_wwfc) on Jan 17, 2017 at 2:09pm PST


The result was very harsh on an excellent Sherwood Colliery side who were the better side on the night. I was also denied the excitement of a penalty shoot out, which is hell when it's your own team, but great when it's someone else's. It had been a good night's entertainment overall though for the 85 fans present, and there was plenty of drama elsewhere. Lincoln City had grabbed a last minute winner against Ipswich Town in a giant-killing act. I was more pleased for Sutton United as they beat AFC Wimbledon 3-1, especially for my mates and huge Sutton fans Ryan and Johnnie who had a great time watching their team pull off a huge feat. With extra time, we were late leaving and it must have been around 10.30 when we left. Mercifully, the irritating Andy Goldstein was absent from TalkSPORT's 'Sports Bar' phone in, so that provided good entertainment on the way home. The journey home was a reasonable one, part of the M1 was closed, so my Sat Nav took me down the A5 to Milton Keynes where we usually get off, which was nice and clear in the main. I dropped Anwar off at 12.20, getting home myself 20 minutes later. After staying up for around an hour, I only had a couple of hours sleep before getting up to face another unhappy day at work. 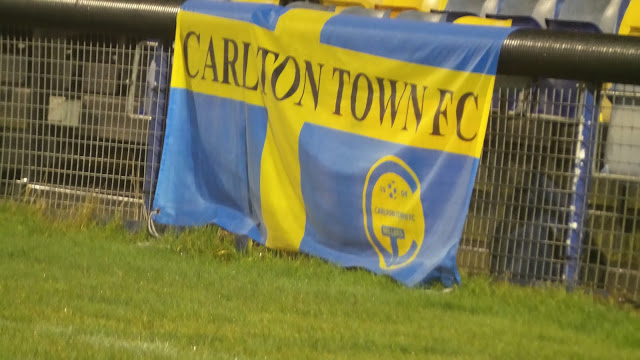 THE BILL STOKELD STADIUM is named in honour of the club's former chairman and is actually located nearer to the town of Gedling than Carlton. On paper its a fairly unremarkable venue with a capacity of 1,500 and a metal stand holding 164. However, this stand does have its seats in club colours, making it a bit better. The rest is open standing, save for an area of cover in front of the dressing rooms building. The bar is warm and welcoming, with Sky TV and the usual range of drinks you'd expect to find in a football clubhouse. The tea bar offers a good range of food, although I didn't sample anything on the night. The club shop has a good range of merchandise, as well as a good range of random old programmes. Overall, an enjoyable and friendly ground to visit, and on the occasion I visited, a decent game. Some of these pictures were taken on a 2007 visit, probably on the way to a Wycombe away game at Mansfield. 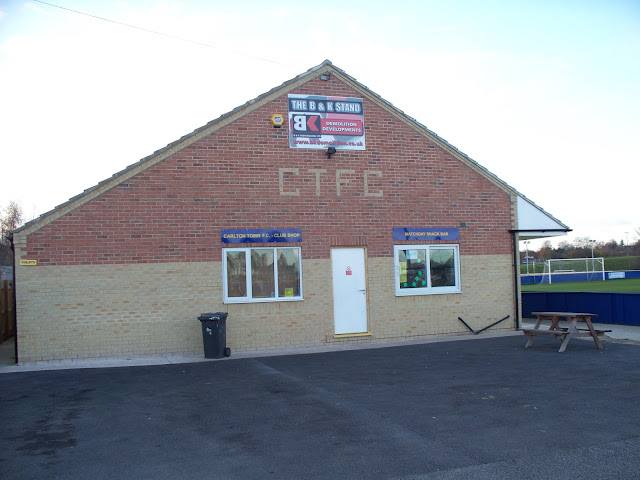 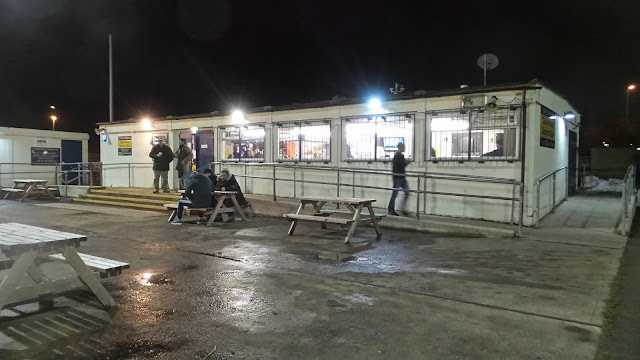 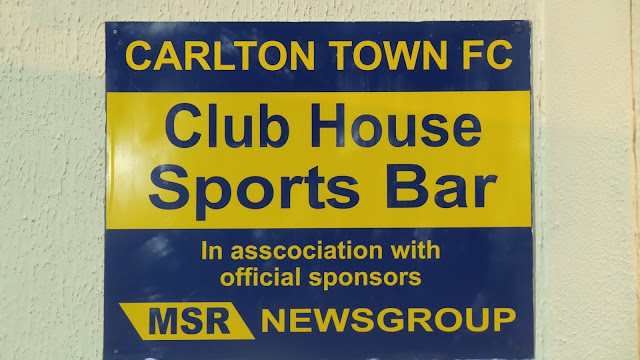 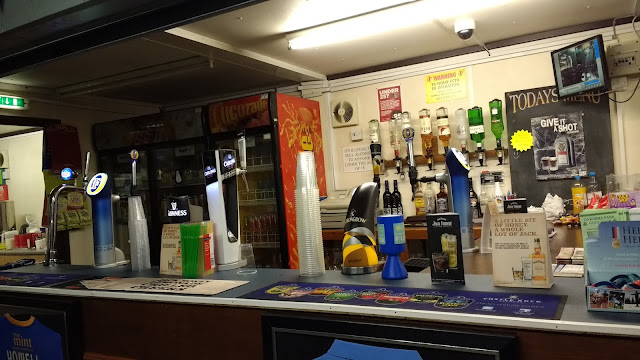 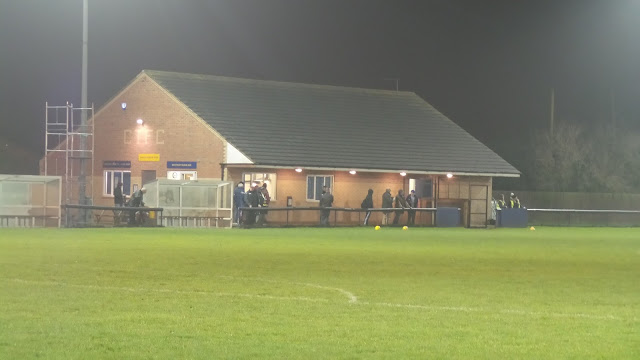