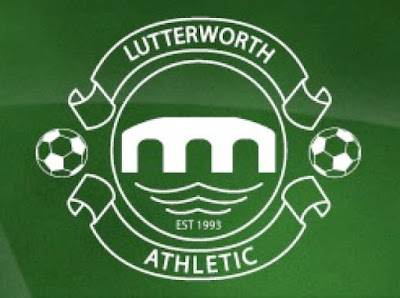 Lutterworth Athletic FC was established in 1993. Starting out in the Leicester & District League, they progressed up its divisions and joined the Leicestershire Senior League in 2005. After a number of good finishes in Division 1, they were promoted to the Premier Division in 2009 when they finished as runners-up to Sileby Town. Three seasons were spent here, the third of which saw them finish as runners-up to Rothley Imperial. Owing to the champions not wanting promotion they were promoted to the East Midlands Counties League ahead of the 2012/13 season. In their only season here, they finished 12th before transferring to the United Counties League. They've been in Division 1 ever since and despite promising finishes of 4th and 5th in their first seasons, it was a mid-table finish of 13th last season. This season has seen a slight improvement with Lutterworth sitting in 10th place at the time of the game.

The club have not yet entered the FA Cup, and little success has been had in the FA Vase. Their sole win in the latter came in 2011 when they defeated Anstey Nomads 3-1 before going on to lose 2-1 at home to Oadby Town in the 1st Round. Local cup wins include the Lutterworth Charity Cup on 3 occasions. 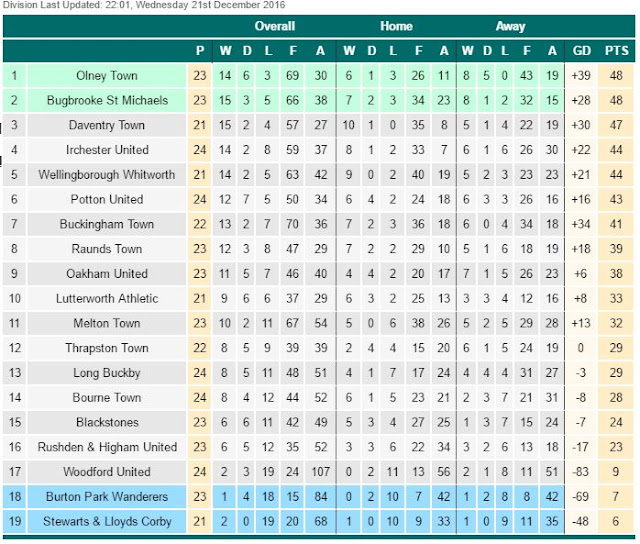 I'd decided upon this visit a few weeks ago when fellow hopper Chris spotted it in the upcoming fixtures. WE'd not done a game together since the middle of October at Boston Town due to his work changing his hours so that he finished at 5. This severely limited our options as the rush hour traffic was bound to add considerable time to whatever journey we tried to make. Thankfully a number of options were possibilities and Lutterworth Athletic v Bugbrooke St Michaels was the chosen game. It would signal the start of 4 days off for me and the end of some very long days at work for me leading up to Christmas. I'd more than likely be leaving straight from work if the previous few days were anything to go by.

In the end I woke up an hour early on the morning of the game and decided to go in rather than go back to sleep. It was as expected, busy, but I'd finished all my own work by 2.30. I was just finishing up when my manager asked me to help another colleague finish his job. Within about 10 minutes of going over, the said gentleman had gone home, expecting me to cover his work. I could have stayed an extra half hour to do so, but decided not to bother and went and clocked out myself at 3. Traffic was pretty built up, and so it took me 35 minutes to get home, That meant that I had just 20 minutes to get changed and have a rest, which wasn't nearly enough. However I had little choice in the matter, and by 4 I was off out again. Thankfully the roads were pretty good, and I was in Milton Keynes to meet Chris a few minutes before our agreed time, He was soon out and so just after 5, we were on our way. Once more, the roads were decent, apart from the long running section of roadworks on the M1 where the speed was reduced to 50MPH for around 20 miles. 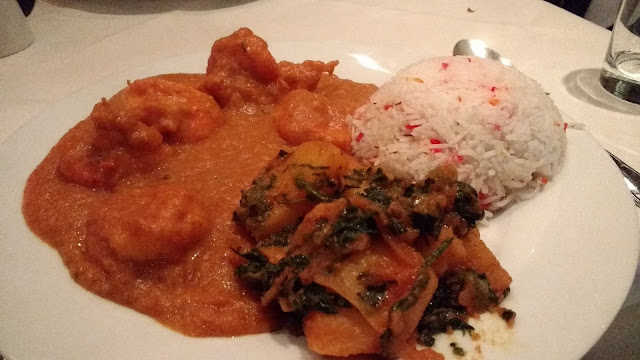 We arrived in Lutterworth at 6, and as we both fancied a curry, we looked out for an Indian restaurant, We found the Indian Lounge, which looked pretty decent from the outside.  Service was good, though the Sharishi Chingri that I had was a bit of a mixed bag.  The king prawns in it were huge and juicy, but the overall portion size was disappointing. It was also served with an unwanted potato side dish. All in all Chris and I both gave the restaurant 6/10 overall. From there we made our way to the ground, arriving at 6.45. The ground was not yet open, so we went into the bar and were pleased to see that fellow hoppers John and Chris were there. It was nice having a catch-up and discuss our upcoming plans. Around 20 minutes before kick off, we made our way into the ground, paying £5 for entry. There were no programmes available due to them being 'stuck in traffic'. I took that as that there wouldn't be one produced, as I didn't see any through the course of the night. I wasn't that bothered though, as I'm running out of space to store them. 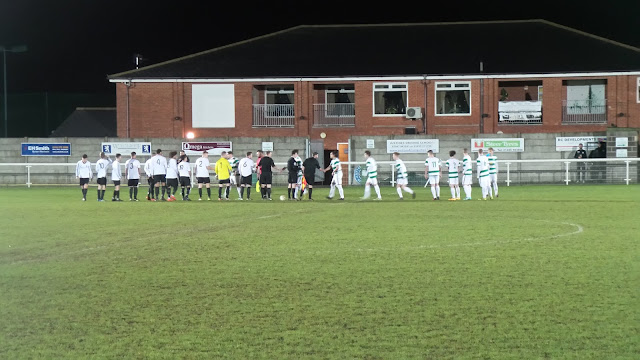 The game turned out to be a real cracker, especially the first half. Due to a lack of information, I have no idea who the scorers were, but it went a little like this. The hosts opened the scoring on 14 minutes, heading home from a cross. It was all square five minutes later with a shot that went in off the bar. Slack defending allowed Lutterworth to retake the lead on 25 minutes with a calm finish by their number 9. The same man made it 3-1 with a similar goal on 33 minutes, but a couple of minutes later they were pegged back again when Bugbrooke pulled one back from close range. After such a fantastic first half, it was a slow start to the second period and it wasn't until 80 minutes that the hosts sealed the game with a 4th. Probably the best goal of the night made it 5-2 with a long range shot that went in off the post before the visitors got a consolation a couple of minutes from time when they caught the home keeper out of his area and finished into an empty net. 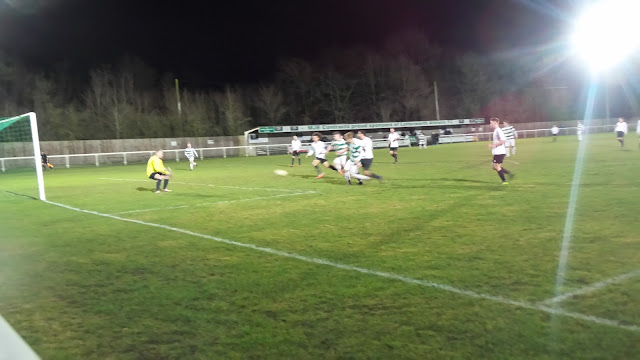 After the game, we said our goodbyes and made our way home. I stopped at a cash machine for Chris and we confirmed our Boxing Day plans of a Rothwell Corinthians at 12 and S&L Corby at 3.  I dropped Chris off at 10.40, getting home myself at 11.30. I had a couple of drinks and watched some TV before going to sleep at 2 am, having been up for 23 hours at that point. 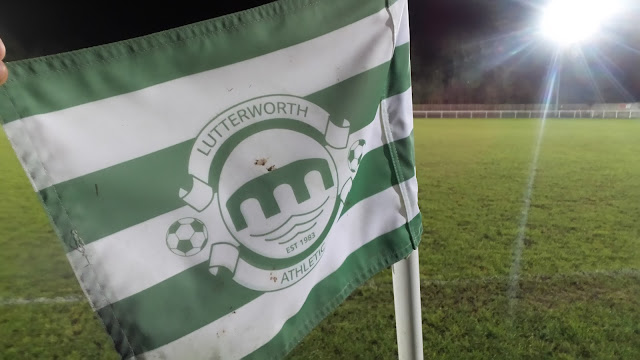 HALL PARK is a fairly tidy venue, and although thought to be bland by my fellow hoppers, I quite liked it. The floodlights helped, 4 powerful pylons in each corner lit up the pitch really well. There was just one stand, and for once it wasn't a flat pack Arena stand. Metal benches made up the seating in this fairly large stand, which holds around 200. The rest of the ground is open hard standing. The bar at the ground is decent, with sports TV and a reasonable choice of drinks. I didn't try anything from the tea bar, but the burgers looked decent. 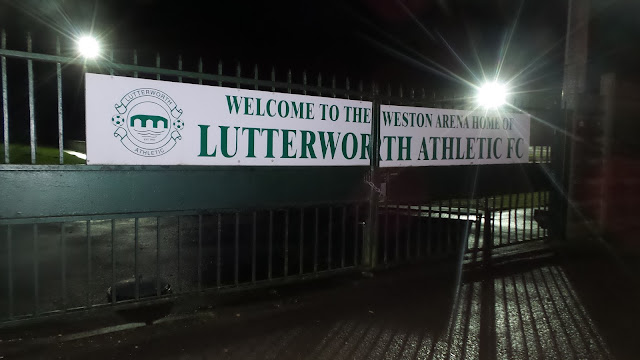 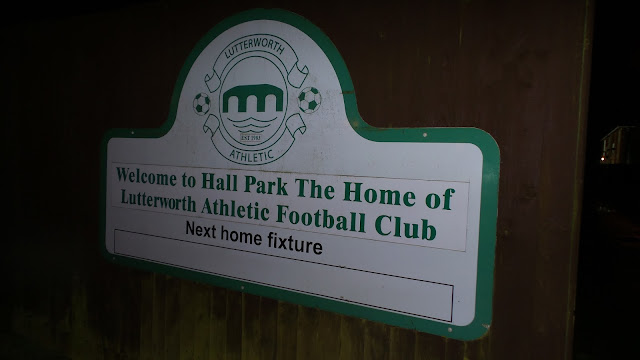 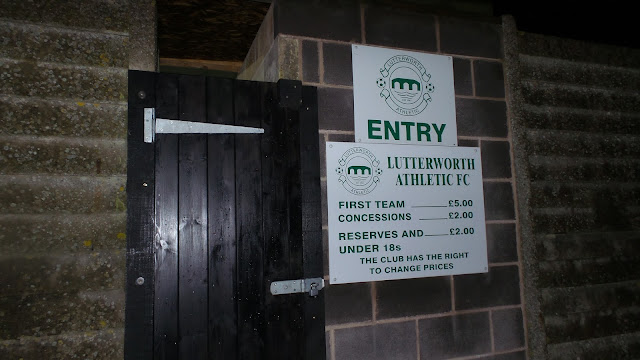 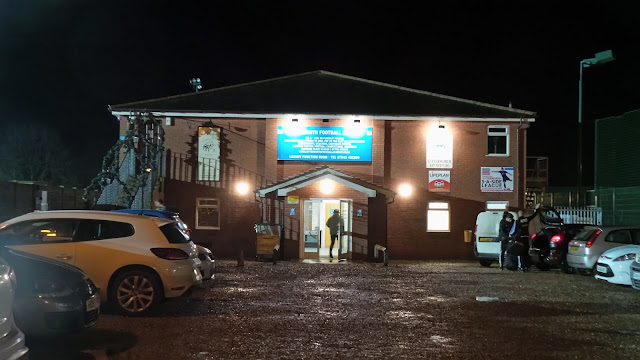 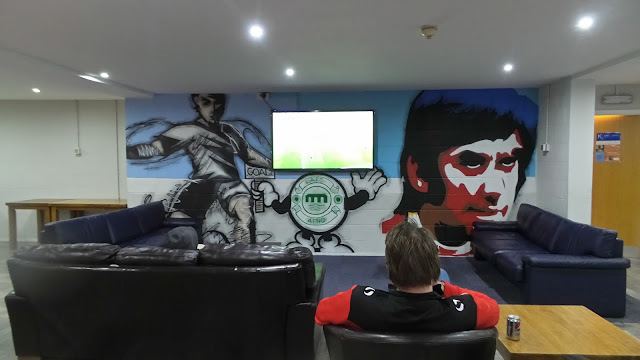 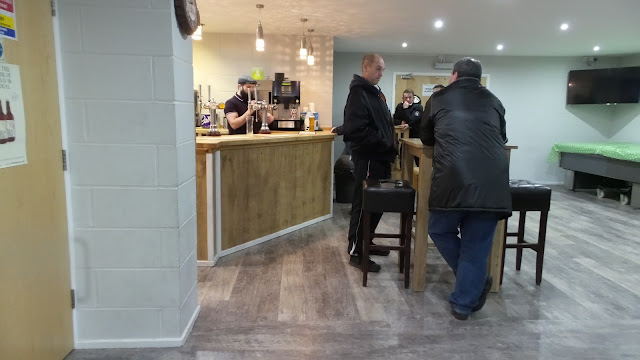 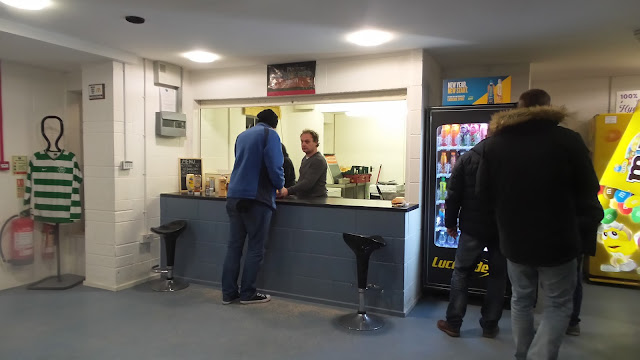 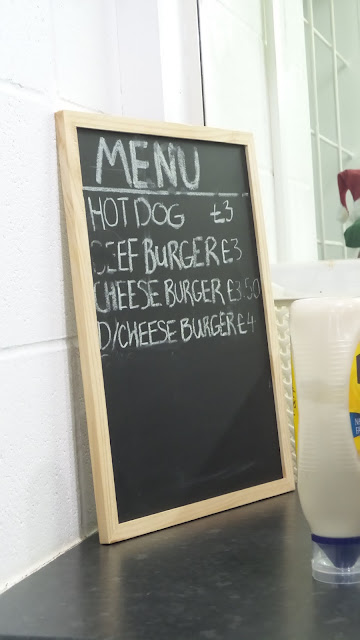 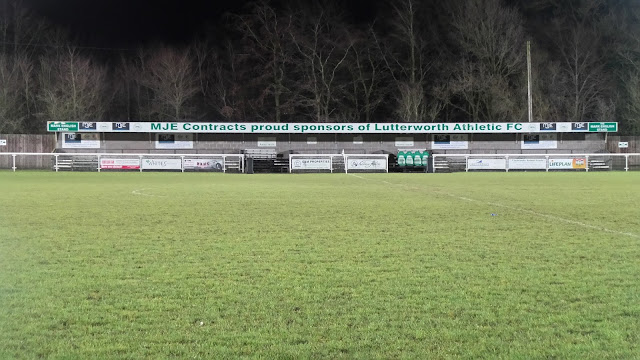 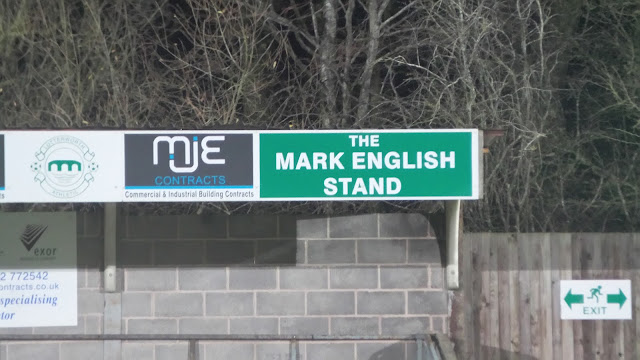 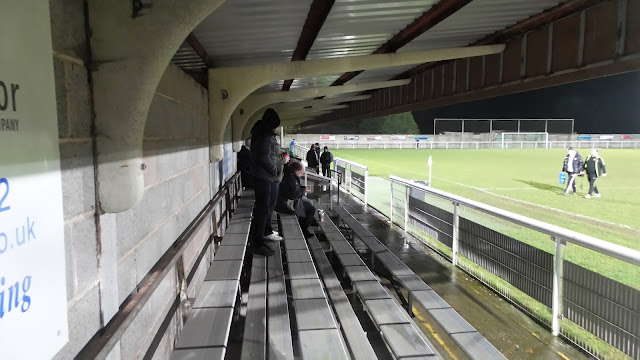 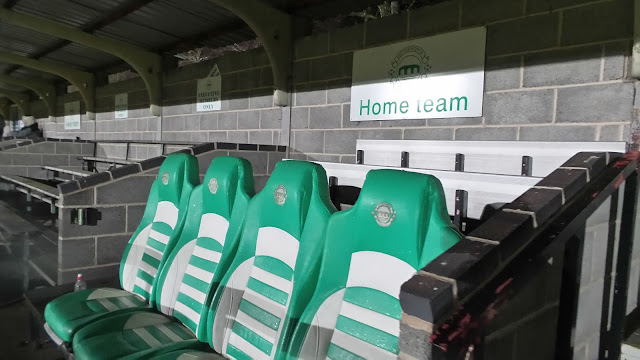 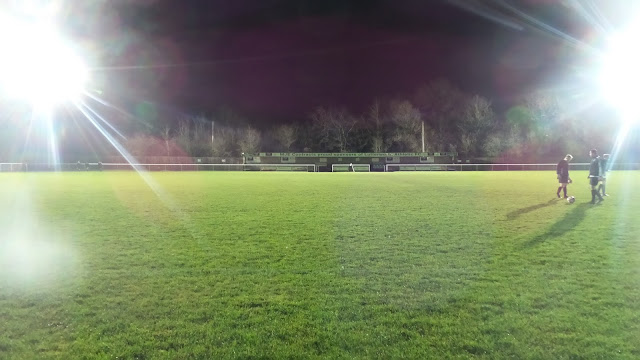 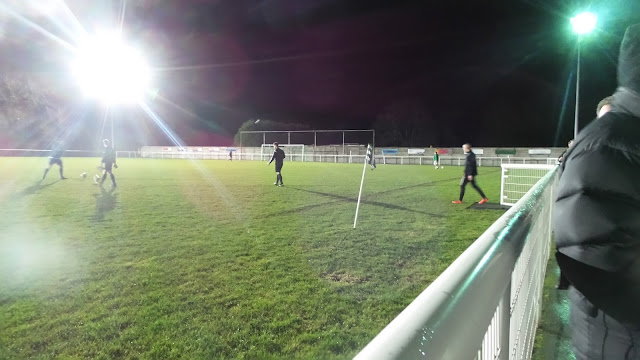 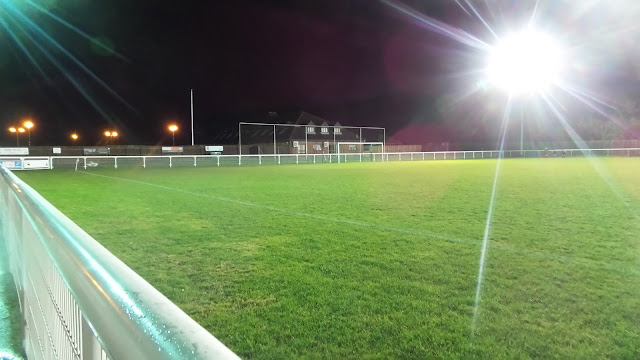 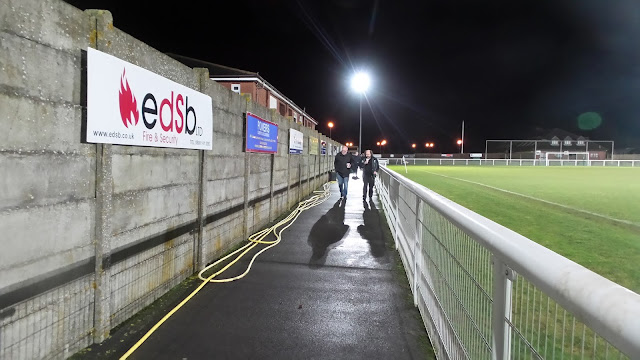 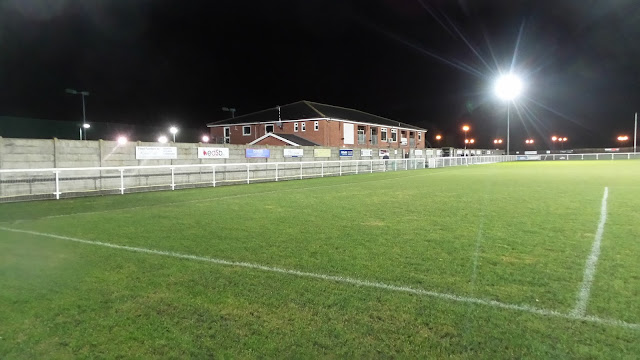 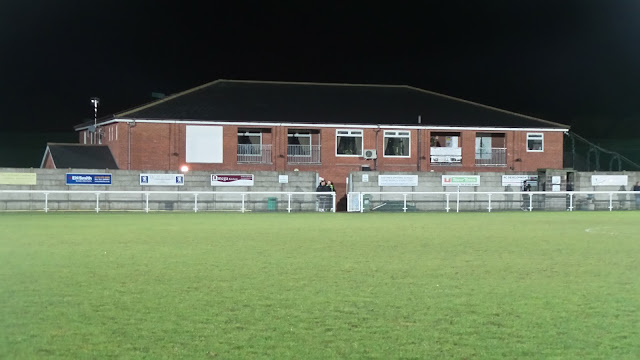