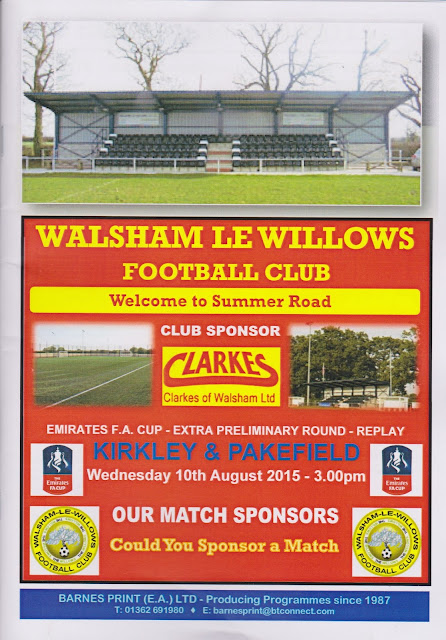 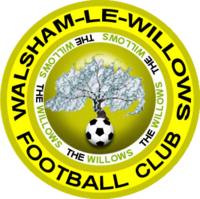 WALSHAM LE WILLOWS FC were formed in 1890. For most of their history they have played in local leagues, such as the Suffolk & Ipswich. Having won the league in 2003 they got their facilities up to scratch and after finishing as runners-up the following year they were promoted to the Eastern Counties League. An impressive 4th placed finish in their first season was built upon and by 2007 they were champions. They've been in the Eastern Counties Premier since then, with a 6th placed finish being their best so far in 2013. The season before last they finished 15th and it was the same story last season, with a bottom half finish.

In the FA Cup they've not seen too much success with the best finish so far being the Preliminary Round. The FA Vase has seen slightly better times, with them reaching the 2nd Round on a couple of occasions. In terms of local cup competitions there have been plenty of wins with notable ones being the Suffolk Junior Cup on 3 occasions and the Suffolk Senior Cup in 2006. 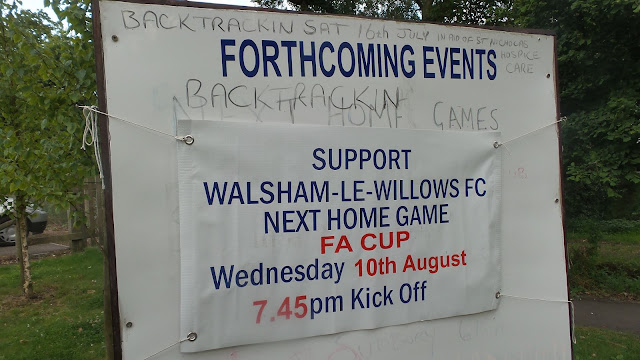 Originally I had been intending to visit Walsham-Le-Willows against Ipswich Wanderers with my Milton Keynes based hopper friend Chris, back on a Friday in mid-April. However, despite it being well into Spring, the weather was still playing havoc and the game was called off with a waterlogged pitch mid afternoon. Luckily Chris is as keen as me to do a groundhop, and while most of our compatriots would have wimped out, we found our way battling through rush hour traffic in pouring rain, driving up to Yorkshire. Thankfully the pitch at Shelley was excellent, and any thoughts of a wasted journey were extinguished when we phoned the club secretary who said 'game on'. The journey might have been a pain in the backside, and we might have got there a few minutes into the game, but it was a good night, nonetheless. I'd still done my blog though, spending an hour or so researching various facts about the club history, and that was saved until whenever I needed it.

An opportunity would present itself sooner than I thought, though I wasn't too keen at first. Dan & Maurice, a couple of Braintree fans and groundhoppers that I know expressed an interest in going to the FA Cup Preliminary Round replay between Walsham-Le-Willows and Kirkley & Pakefield. It was on Saturday night that they asked me, and at first I wasn't that keen. I had a 4am wake up on the day before and after the game, and at the time I was planning to do another game at Littlehampton on the Sunday, as there was a good pub near the ground. However, after having a couple more ciders than intended, I knocked the idea on the head and decided to have a day at home instead. The thing that changed my mind was when I when I was at Wycombe Wanderers v Bristol City the previous night and Wycombe played so well and I enjoyed the football so much, I thought 'I want more cup football!!'. So I contacted the lads, they were still interested and we agreed petrol money. The decision was made all the easier by the fact that my parents were out for the evening anyway, so I wasn't messing up any dinner plans.

On the day of the game, I had work, but it was a short day and I was out before 11. The lack of hours at work will last for around a month, and typically came in the most expensive time of the year for me, however I valued the free time and I should be OK financially. The previous day, I'd had delivered a new computer and phone, and for once everything went without a hitch with regards to upgrading. However I did need to sell some stuff to make up the shortfall and so I had a few postage labels to print. Apart from that I did some more research and updates for this blog, as well as catching up and chatting online. I left just before 3, dropping my stuff at the post office, before heading to my first port of call, which was Chelmsford. Or more specifically the Essex Cider shop which I always take the opportunity to visit when over this way as it offers a great range of my favourite tipple. I needed to get something to eat, and that would usually involve a Wetherspoons, but on this occasion I was not intending to drink. 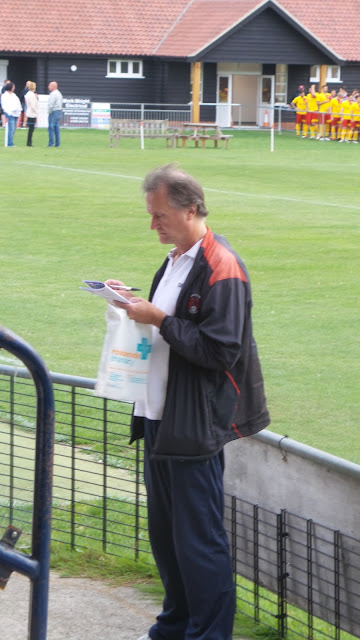 The journey was generally decent,  with only around 20 minutes delay on the M25 and I was in Chelmsford by 4.40. I knew there was a car park behind the cider shop I wanted to go to, and that it was only 20p for 30 minutes parking, which should just about give me enough time to do what I needed. I picked up 12 bottles of cider that I'd not had before, before going to Taco Bell. There I had a Chicken Sizzler Wrap and large Mexican fries for under £3.50. By now it was 5.15, and so I headed off to Braintree. The journey was swift apart from the last 2 miles, which took me around 15 minutes to complete. Luckily Maurice had helped out by going to Dan's to make the pickup easier, and so after picking them both up at 5.55, we made our way to the game. A couple of tractors tried to delay us along the way, but we were at the ground by 7.10. I parked up in the car park opposite the ground and went in, paying £6 entry and £1 for a decent programme. Before the game, we all got some pictures for our collections and I spotted a couple of fellow hoppers, though I couldn't put a name to either of them. 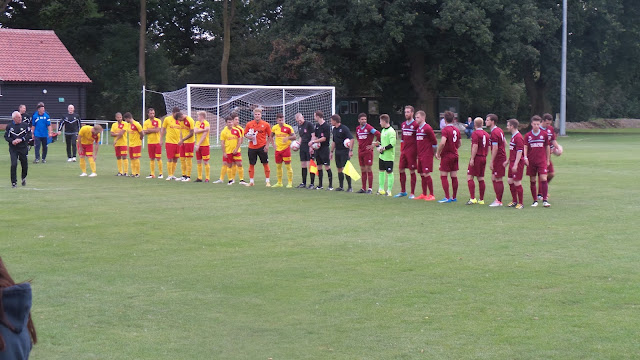 The original game had ended in a dull 0-0 draw, and I knew that whatever happened it would not occur again, or at least if it did we would have the drama of a penalty shoot-out.  Form wise there was not much to go on, with Kirkley & Pakefield starting their league season with a 1-0 defeat at home to Gorleston, and  the hosts were yet to play a league game. The hosts started on the front foot, but soon the visitors had a good spell of their own. Ross King made this count on 18 minutes when a cross was put in from the right and his drilled volley from the edge of the area arrowed into the bottom right-hand corner. Both keepers made some cracking saves to help out their sides but it wasn't until 84 minutes, and it was the goal that all of my travelling group wanted, as we were keen to see extra time and penalties. Again it was a cross from the right, but this time it was a towering header sqaured it all up to the delight of the home fans. They were to suffer FA Cup heartbreak though as in the last minute, Kirkley & Pakefield regained their lead. Ben George latched on to a good through ball and kept his composure to fire his team into the next round as they held on for a couple of minutes after, without being seriously threatened. 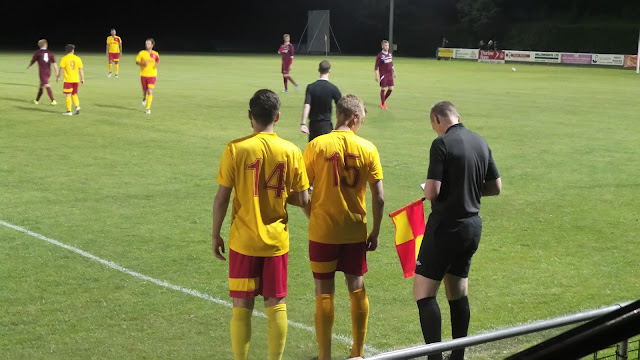 So, a good game, but it was a bit disappointing to yet again be denied penalties at the death, and despite several close shaves, I've still not seen a shoot-out since seeing Wycombe suffer heartbreak at Wembley in May 2015. Maybe it was for the best, as I had to be up for work at 4am in the morning, and it was already a late night. I later found the attendance was quoted as 86 on the FA website, but it seemed a lot more than that to me, with quite a buzz to the place. It was time for us all to go home though, and after a decent trip back I dropped Maurice & Dan off at 11.00. I put my Two Mikes podcast on my car radio - one of the benefits of having a working phone again after suffering a fortnight's famine in that respect. I got home myself at 12.15, trying to get to sleep just before 1, but having a restless night. I felt OK the next morning though, as you always do after a couple of cans of Irn-Bru and I caught up on lost sleep by sleeping for 4 hours the following afternoon. 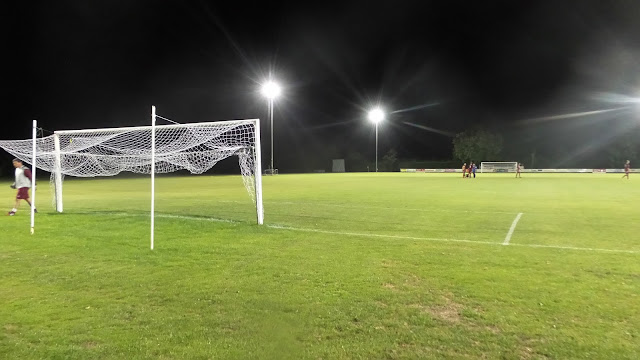 SUMMER ROAD is a smart ground, and it looks like it has been developed fairly recently. Like all grounds that share with cricket, it does have a certain charm about it and around a third of the ground is inaccesible to spectators. The most of it is flat standing, though there are 2 covered areas. Thankfully they are proper structures as opposed to metal stands. The seated stand offers good views and leg-room with a capacity just short of 150. The small covered end behund the goal holds around that also.

For food there is a BBQ and additional snacks in the clubhouse. The bar has a reaonable range, though cider drinkers are restricted to a few bottles. The ground appeared to be right out in the sticks, with nothing of note seen on the way in or out. Overall, a nice friendly club well worth a visit, I certainly enjoyed my visit there. 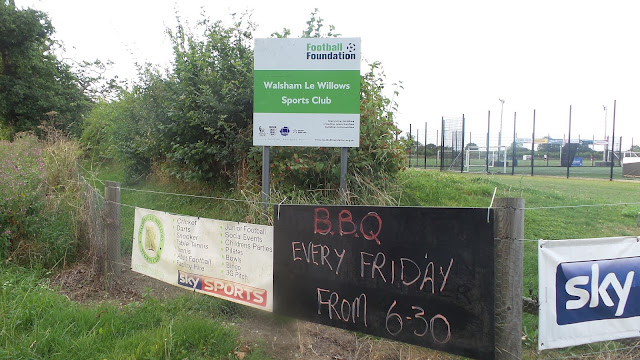 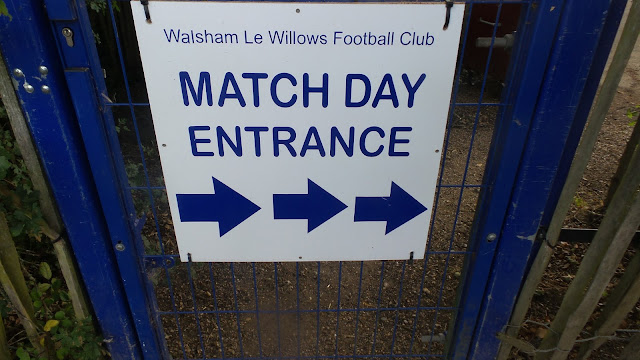 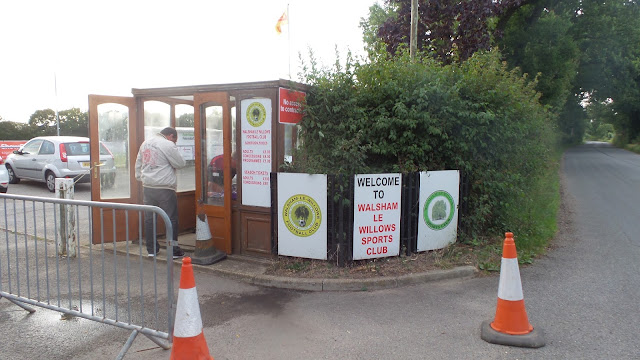 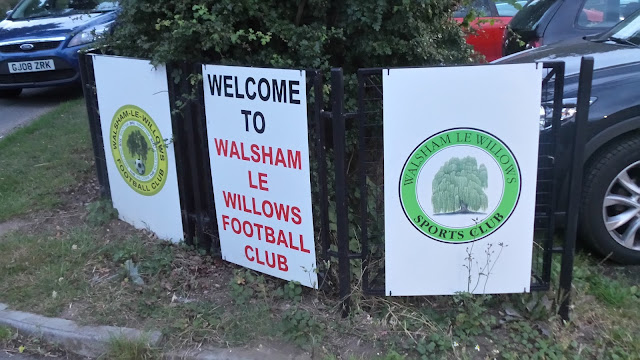 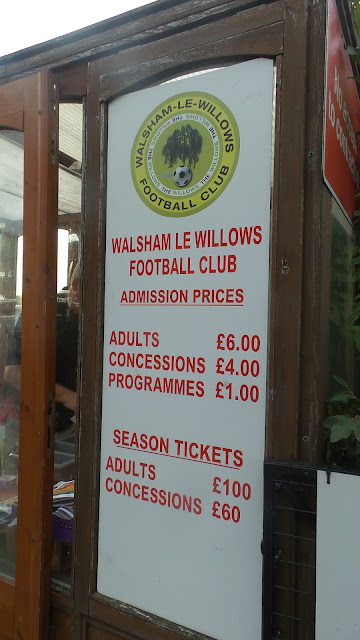 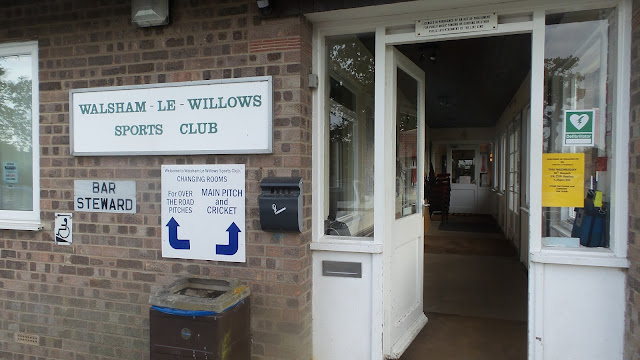 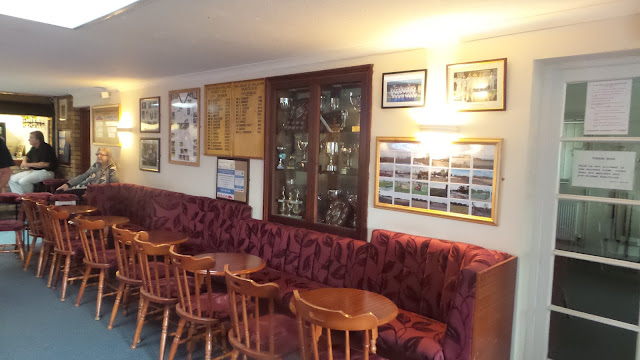 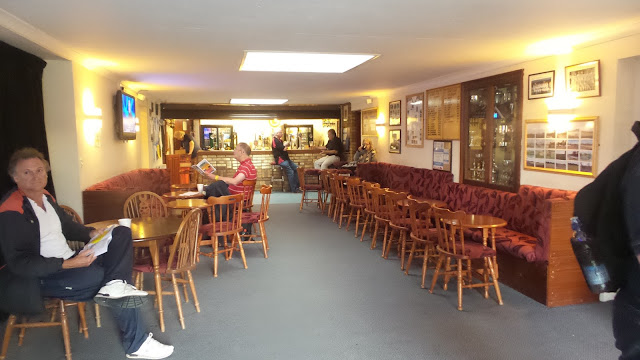 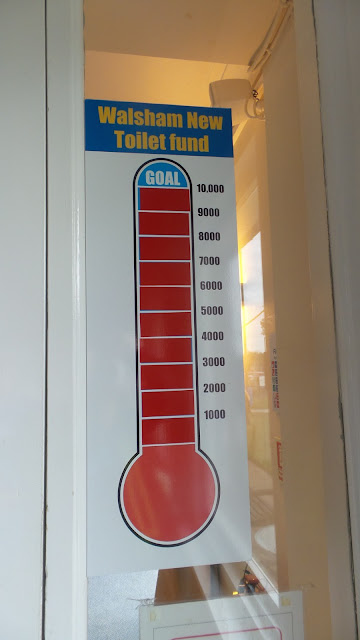 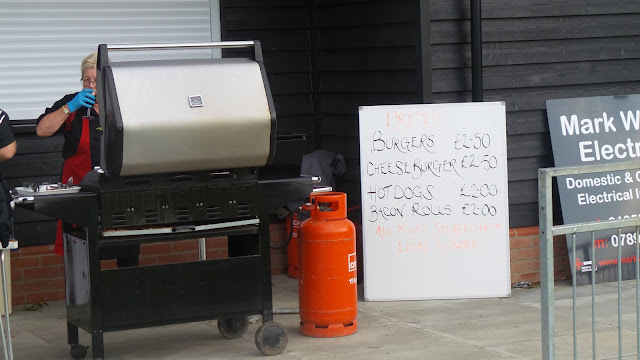 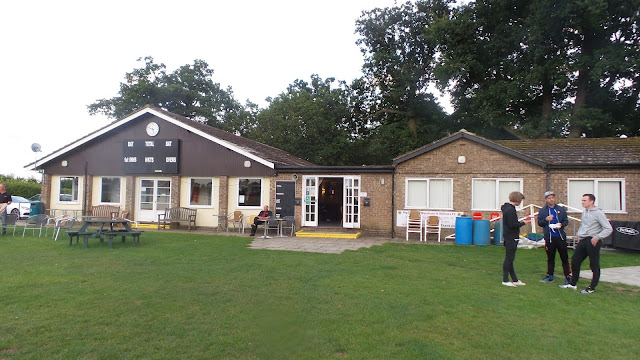 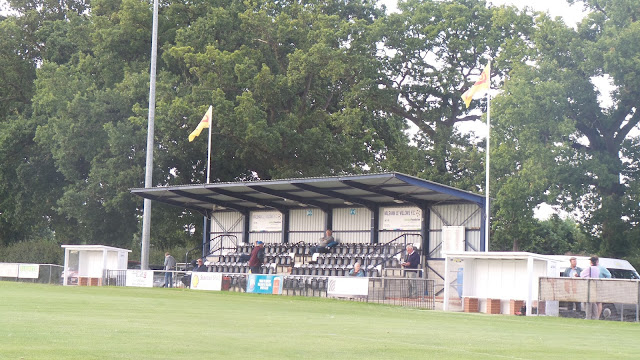 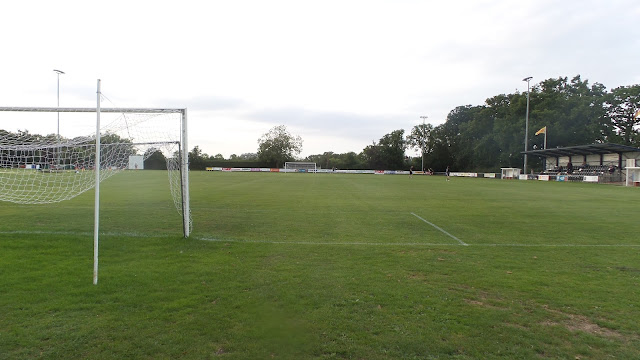 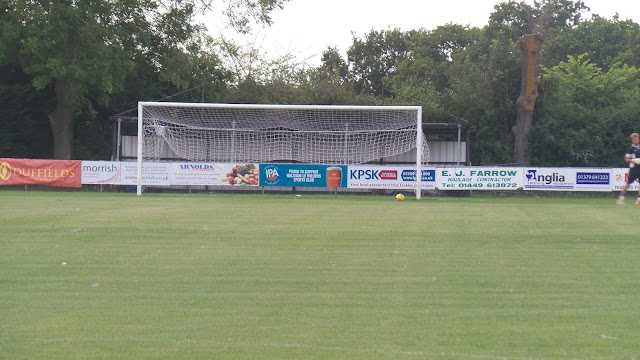 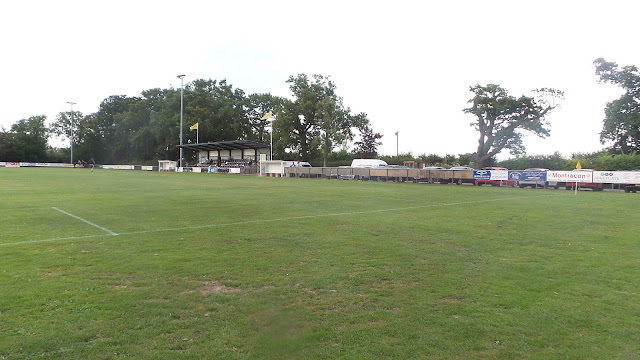 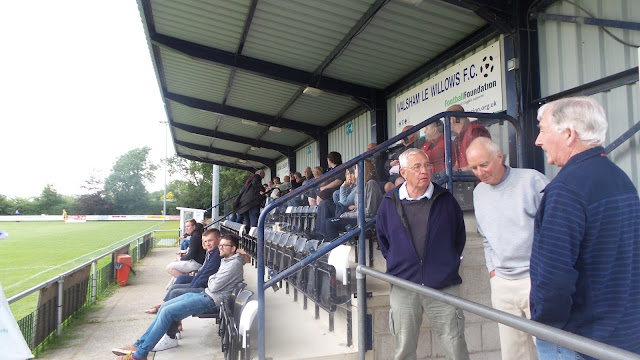 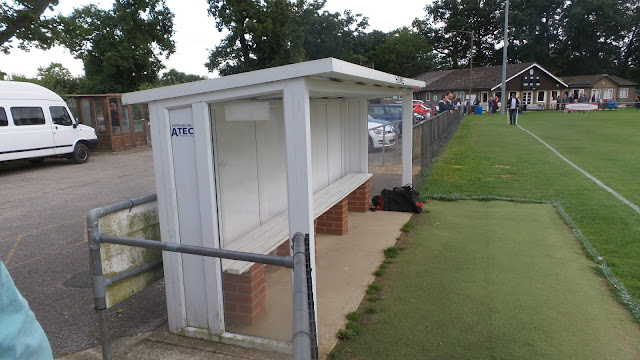 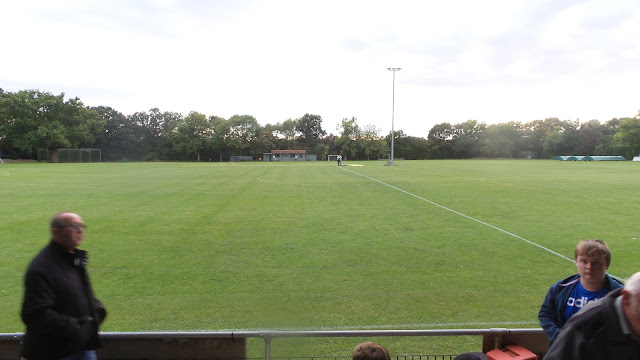