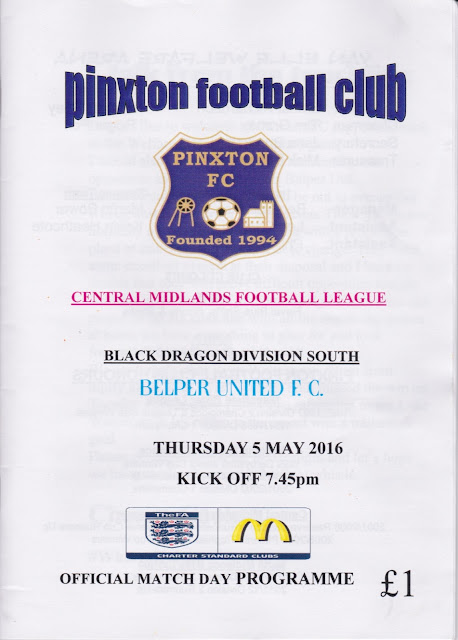 PINXTON FC was founded in 1994, making them a fairly young club. They started out in the Mansfield Bitter League and were an instant hit. 95/96 saw them Division 2 champions and league cup winners. The following year they joined the Midland Regional Alliance, winning the Derbyshire Junior Cup in 1999. A promotion followed from Division 1 in 2002 and they found themselves promoted to the Premier Division. 6th place was their highest ever placing in this league and that signalled time to move on for the club.

Since 2004 they have been in the Central Midlands League. Starting in the second tier Premier Division, they won promotion to the wonderfully named Supreme Division in their first season. However, for some reason, 15th out of 21 teams was not good enough and they went straight back down. They bounced back well though and since 2007 have remained in the top tier, though the leagues have now split into a North & South regional split rather than a two-tier system. They've had their best ever placing of runners up on 3 occasions with the most recent being last season. This season has seen them fall away a bit, but they've had a fantastic run in the FA Vase. A comprehensive 4-1 win over Lincoln Moorlands Railway who play at the level above put them into the first round for only the 2ind time in their history They gained victories over Cradley Town and Long Eaton United despite the latter being a highly successful team at 2 levels higher. The dream ended in the third round with a rollercoaster 4-3 defeat away to Nuneaton Griff. 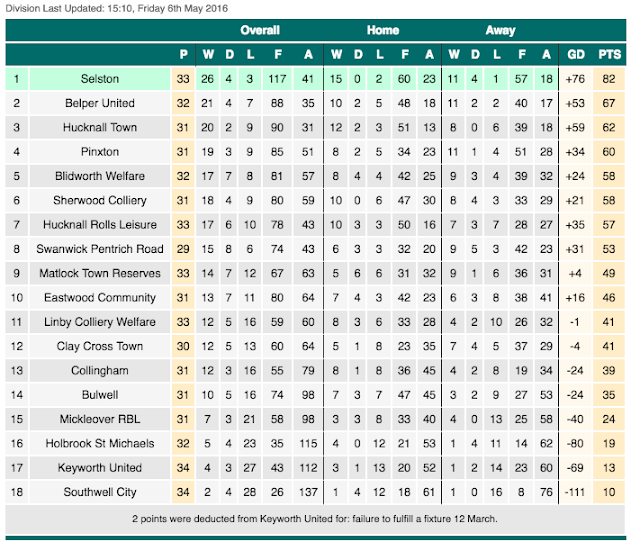 As it was nearing the end of the season, I was trying to get in as much football as possible. That said, I’d spent a heck of a lot of money recently and so wanted to try and go to games where I could pick up other hoppers. So I sent lists to the two main hoppers I go with, Anwar & Chris. The former is a little more fussy about where he goes and has more commitments, so it was no surprise that it would be just myself and Chris again. We like the same things on a groundhop, albeit in a different order. Chris’ first choice was at Warboys Town, but that had very little around the area in terms of a decent pint or pre-match meal, had it done it would have been the ideal choice as it was the nearest. My first choice was a team called Wonder Vaults, playing at Wednesfield FC, however, Chris was not a fan of bracketed (where a team other than the owner of the ground are the host) ticks. This had a Wetherspoons 10 minutes away from it, which would have been ideal. So we left it until 4PM on the day of the departure to decide, with the chosen game dependent on what the traffic was like on each route. 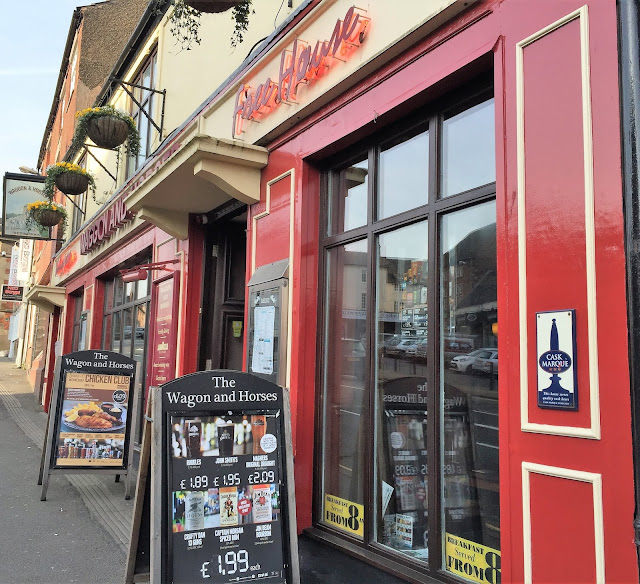 On the day of the game, I was working as per usual, and as has been the case recently it wasn’t very busy. I was out by 11.30 but on my break, I was taking another look at tonight's options. I was just coming round to the idea of Warboys Town when I worked out that we could stop somewhere decent en route. When I got home I searched to see if the game was still on, Warboys were still in the dark ages with no Twitter or website, and the Peterborough & District twitter hasn’t been updated since yesterday. It was a good job that someone from Stamford Belvedere, the nights travelling team were on the ball. Despite probably having the smallest audience of the 3, they had tweeted around midday that the game was off. There was no reason given, though I was pretty miffed that the chances of getting back home at a decent hour had been blown. I had my lunch and a bath before going out to vote in the local election. I left at 2.45 and after a bit of delay due to a closed road in Aylesbury, I arrived at Chris's work in Milton Keynes at 3.50. I waited for him to finish and by 4.05 we were on our way with the mutually agreed destination being Swanwick Pentrich Road. Chris requested 'Punk FM' as the soundtrack and they had some good tunes on including Sham 69 and The Undertones. The M1 was on disgraceful form as ever, as was the alternative route we took. With our original choice kicking off at 7pm we decided to go to Pinxton instead and also stop at Alfreton Wetherspoons for dinner. I'd much rather park up and go to a pub near the ground but there was nothing decent near Pinxton. The Wagon and Horses was an excellent Wetherspoons and had 4 proper ciders on. I had my favourite cider of all, Black Dragon, along with a Tennesee Burger before making my way to the ground, a 5-mile drive away. Thanks to the local Tesco we hadn't had to pay to park so that was a bonus. We'd had a bit of time before kick off, but it was still too tight for my liking, I could have done with an extra half an hour and that was with choosing a match that kicked off 45 minutes later than my original choice. 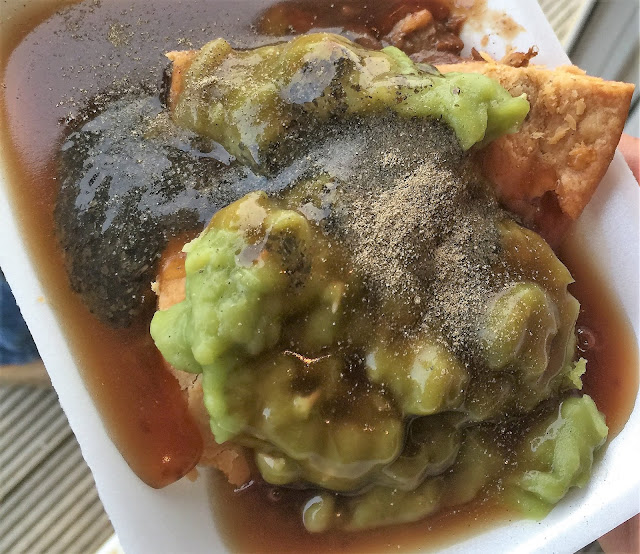 We got to the ground at 7.30 and went straight in. I updated my Facebook and settled down to watch the game. Before it started I went in the tea bar and got a pie as recommended by experienced hopper and pie consumer Laurence. He was spot on and it was fantastic, amongst the best pies I have had. For the first half, I stood with Chris and another Chris, fixtures secretary of the Central Midlands League who had kindly saved me a programme. The first half was all Pinxton and they took the lead on 35 minutes with a scrambled goal from close range by Tom Ellis. Belper equalised just before half time with a goal on the break. The visitors had the better of the second half and they took the lead on the hour mark with a headed effort from around 4 yards. On 70 minutes Pinxton thought they had equalised but it was ruled out for a foul on the keeper. The game was sealed right on full time when Belper's number 12 got away from the defence and drove an angled shot in the bottom left-hand corner. We left around 9.40 and it was a good journey home. The average speed cameras through the roadworks were out in force again, though in the dark with unlit signs it was difficult to tell which sections were limited and which were not. A definite scam by the authorities and I just hope that I don’t get a nasty surprise though the posts as there were no other cars on the M1 to judge my speed by. The sports radio bulletins were full of Liverpool beating Valencia but the real result of the night came up at Grimsby. I have great mates in both camps but Braintree went up to Humberside and got a shock 1-0 win to put them in great step for the second leg on Sunday. Thanks to a good mate at Braintree I have a ticket in the home end for what must be the biggest game in their history, and all I wanted is there to be something to play for in the second leg which there sure is with that result. The rest of the journey was spent searching through rubbish radio station after rubbish radio station and I was glad to drop off Chris at the fairly early time of 11.15. I got home myself at midnight, spending an hour before dropping off to sleep. With me up at 4am, 3 hours was not a great amount of sleep but at least I caught up with a couple of hours the following afternoon after the busiest day at work in ages. I only hope that the pace relents for Sunday as I am hoping to head to Essex as early as I can, and the last thing I need for that is a big workload. 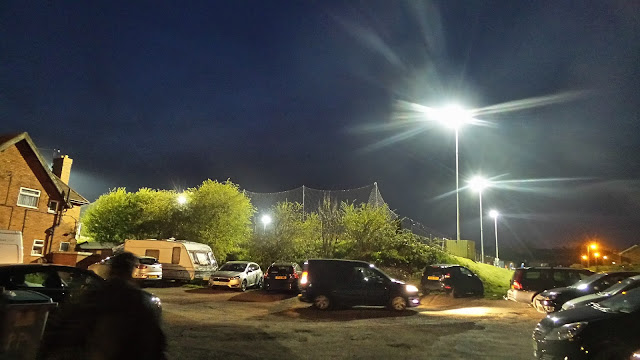 THE WELFARE GROUND is an excellent venue for step 7 football and could easily serve a couple of levels higher. There is one stand at the ground, tucked away down one end which holds around 100 fans seated under cover. The rest of the ground is hard standing. The tea bar at one end offers a decent selection of pre-match food and drink and the pie, peas and gravy I had were fantastic. Outside the Miners club provides a good choice of drinks, albeit that cider drinkers are restricted to Strongbow on draught. This venue shows live games from BT Sport & Sky Sports and a separate room has a huge screen to make viewing all the better. Overall It's a great friendly place with a real community spirit and is well worth a visit. 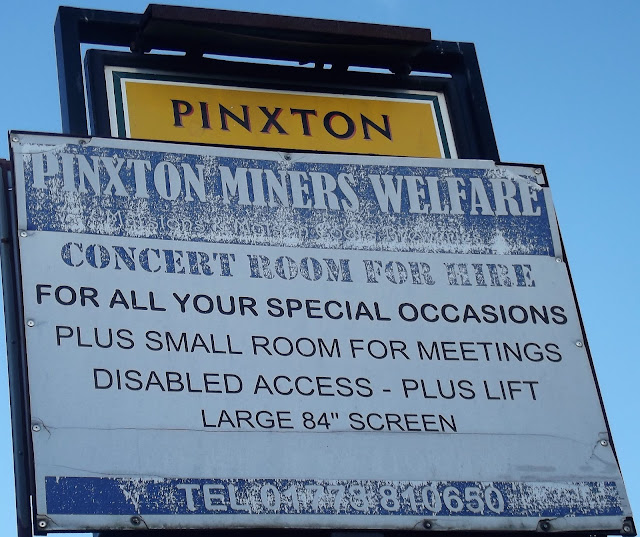 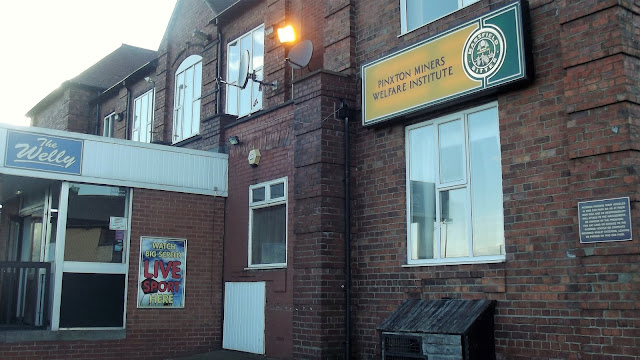 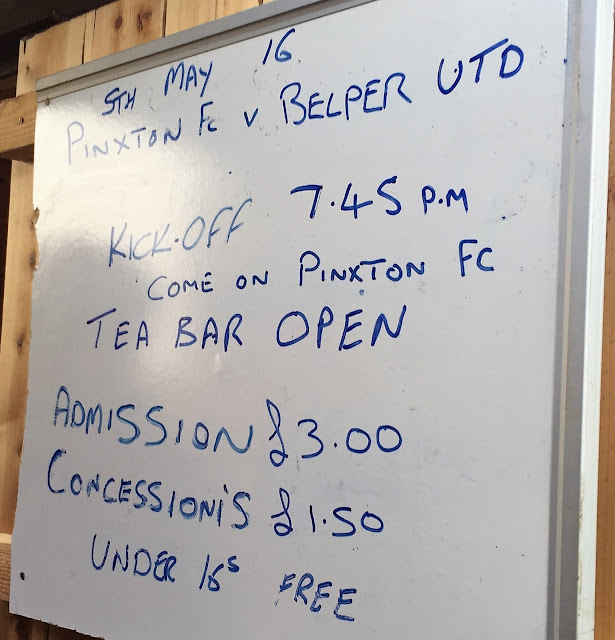 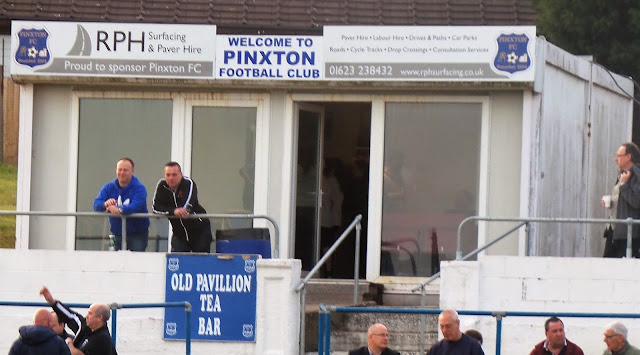 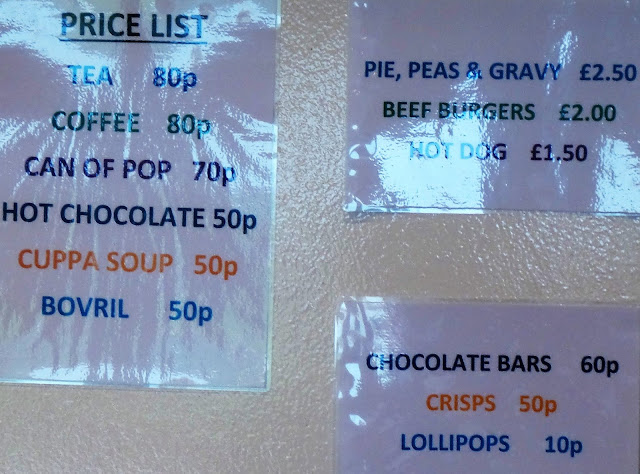 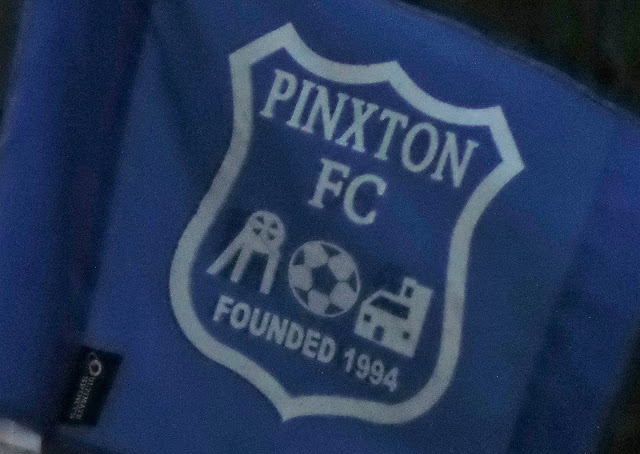 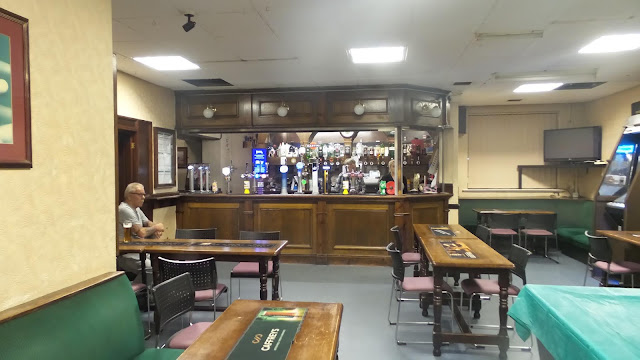 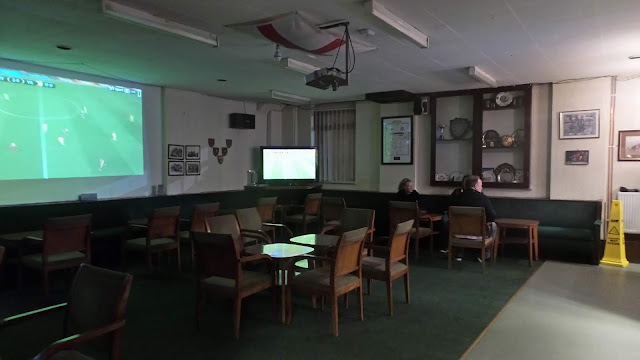 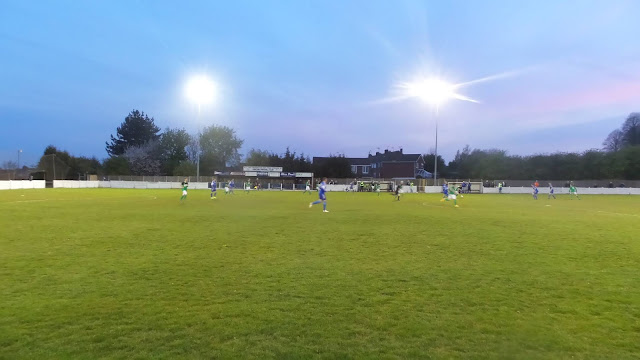 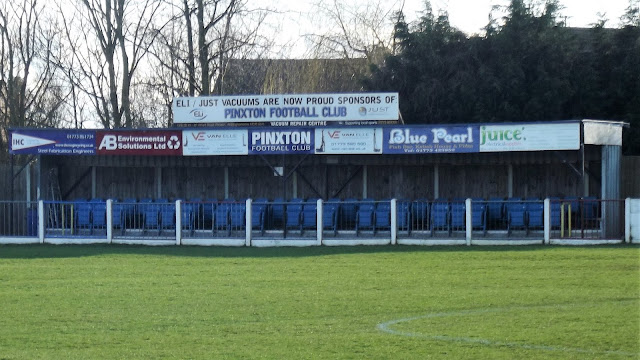 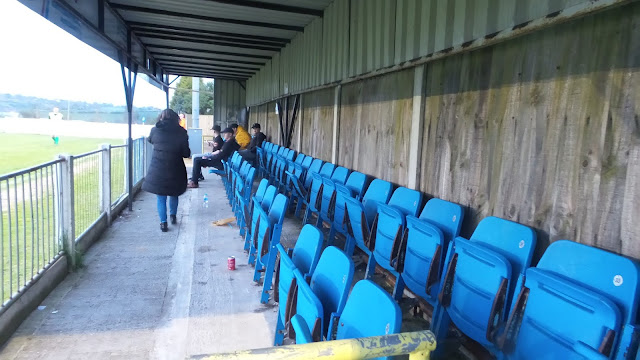 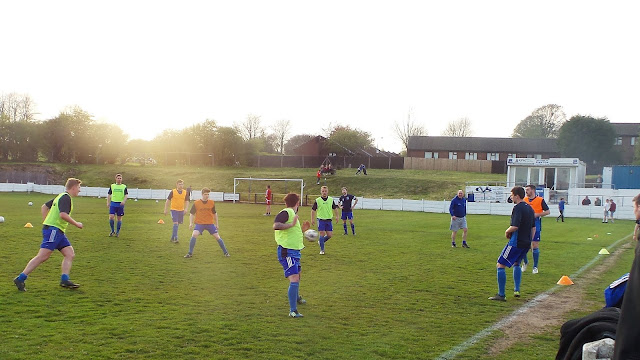 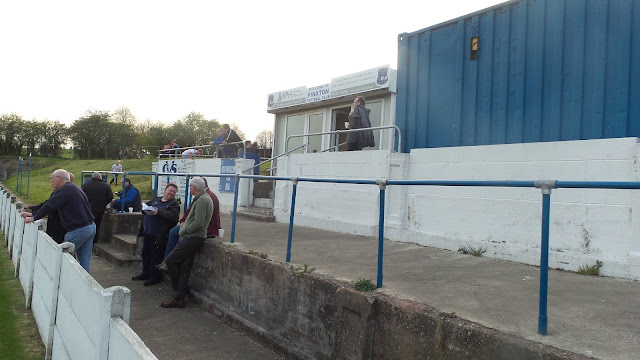 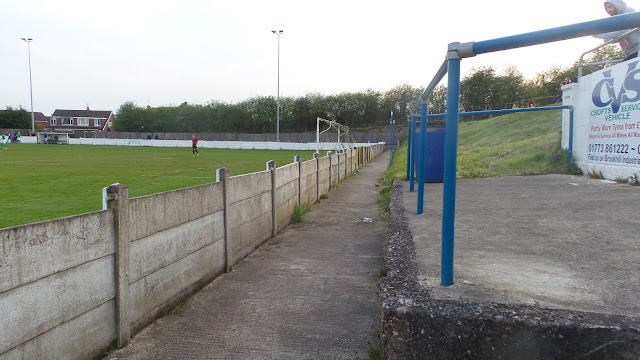 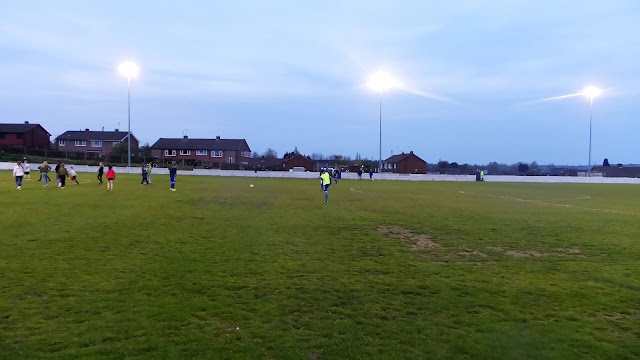 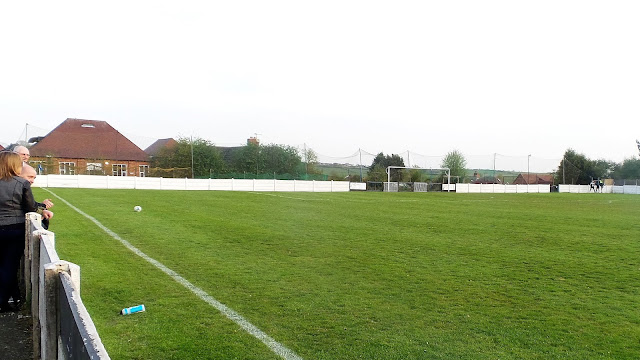