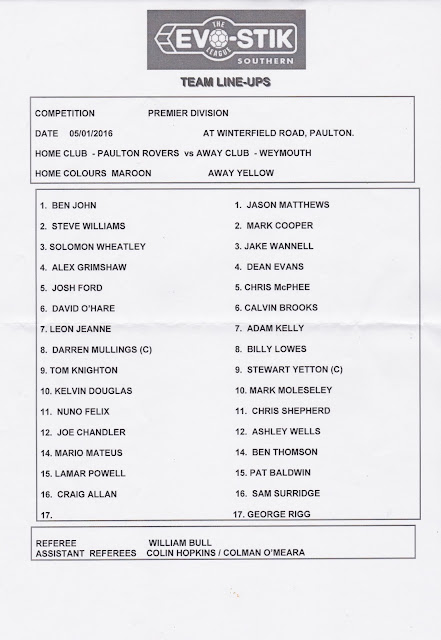 PAUL TON ROVERS were formed in 1883 and spent the vast majority of their history playing in the Western League, both when it was a singular league, and in it’s present and original format of a 2 tier system. Despite not ever becoming champions, plenty of high placed finishes were had, most importantly of all in 2004. That season a runners-up spot behind Bideford was enough to earn them promotion to the Southern League Division 1 South & West. After a steady start, they finished as runners-up in 2007 but were beaten in the playoff semi-finals by Hungerford Town. It was not until 2014 that they would get another chance, but this time Tiverton Town and Merthyr Town were defeated to send them up to the Southern Premier. After a 10th placed finish in their debut season last time out, they had found this season a lot tougher and sat bottom of the league prior to kick off, with only 2 wins all season. Playoff chasing Weymouth, sitting in 6th place, would be a tough nut to crack.

In the FA Cup a famous run was embarked upon in 2009 and it earned them national recognition when the game was shown live on ITV. Though they lost the 1st Round tie to Norwich City, they gained a lot of admirers and did well financially out of it. They’d neaten plenty of higher league sides to get there, most notably Newport County in the 3rd Qualifying Round. The Welsh side were in the Conference South at the time and would go on to reach the Football League little more than 5 years later. Though success in the FA Trophy has been hard to come by, the 5th Round of the FA Vase was reached in 1990, where they lost to Yeading in a replay. A number of local cups have been won, most notably the Somerset Senior Cup on 12 occasions. Well known former players include former Wycombe left back Andy Sandell and ex Bristol City keeper Steve Phillips. 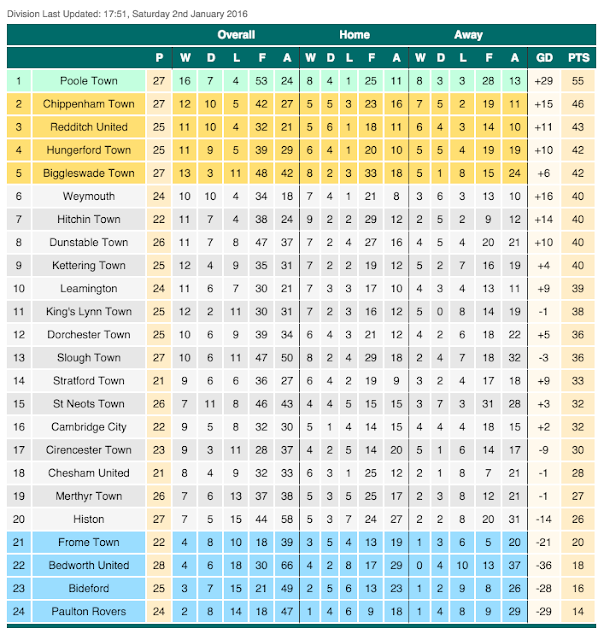 After a great game and day out on New Years Day, up at Heanor, my hopes were high for the decent start to continue. Wycombe Wanderers had other ideas however and saved our worst performance of the season for last Saturday, losing 2-0 at home to Morecambe in an absolutely terrible game. To make matters worse, we had keeper Matt Ingram sent off, and now he will miss next week’s FA Cup game against Aston Villa, meaning that relative rookie Alex Lynch, who has only played a handful of games, albeit the playoffs last season, will be between the sticks. The dismay continued over the next 2 days with hard days at work, not helped by the usual suspects not turning up. It doesn’t help that the manager is a lazy toerag, barely lifting a finger, and doesn’t bother punishing people for their laziness either. I was glad to be having my day off, though our destination for our groundhop was still undecided. I got the feeling that Anwar really fancied doing Paulton Rovers, which was totally fine by me. The weather looked better in the Midlands but even that had not stopped a game at AEI Rugby being called off on Monday night. So perhaps it was a good idea that we were making the decision when I got to his at 4PM. It would mean I’d not be able to research the hosts' history or eating places near the ground, but that’s the poxy weather for you.

I’d had a good 10-hour sleep the night before the game, my best in ages and a real bonus seeing as I was only going to get around 3 hours tonight, what with work at 4 in the morning. I walked down town for a bit of exercise, before coming back and spending the afternoon at home checking fixtures and pitch inspections. After Paulton Rovers v Weymouth passed its inspection we decided to head off there, barring any last-minute monsoon the game would go ahead as scheduled, I was quite pleased, as the weather being exceptionally uncooperative meant that most of my options were off. In fact, the weather had played havoc with my list - out of the original 27 options, only Paulton and Blackfield & Langley were on, with 6 others still to be decided. I got to Anwar's at 4 and soon we were on our way. The journey down to Bath was decent, where we stopped at Morrisons for dinner. I had Chicken Tikka Masala and an apple juice which went down a treat and only cost me £4.50. From there it was on to the ground and with a good journey, we got there at 7.10. 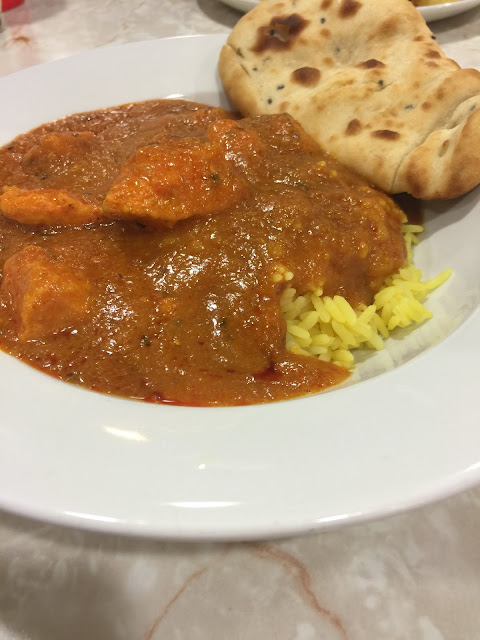 I paid £9 entry which included a free teamsheet as there was no programme. A bit of a missed opportunity with good travelling support, but I was content with a team sheet. There were only 20 minutes to kick off so I killed time by taking pictures of the ground and catching up on Facebook. I was looking forward to a hot drink but annoyingly my flask had stopped working and my Bovril was cold. Weymouth fans were in good voice and they started the game on the front foot having a couple of chances early on, though Paulton had a couple of openings on the break. It was more equal as the game went on and it was the hosts who took the lead with 20 minutes to go. It was a really well-worked move that I caught on video and though the last touch may been by a Weymouth defender, it was the excellent cross that set it up. The lead didn't last long as a few minutes later the visitors were level, courtesy of a close-range finish after the ball was dragged back across the 6-yard box. There were chances for both sides but it remained level until the end. Paulton had certainly impressed me, and should they put in a performance like that every week, they won’t be at the bottom of the league for long.


It had been a good day, and I was pleased with my choice of game. Out of 27 options that I had, only 4 survived. Norwegian hopper Anders was present as Blackfield and Langley beat Hamworthy United 2-1 and in my only other unhooked ground Mildenhall Town beat Kings Lynn Town in the Eastern Counties League Cup. Otherwise, it would have been a revisit to Camberley Town who thrashed Farnborough 7-0 in the Aldershot Senior Cup. Before I set the Sat Nav homeward I stopped at a Co-op food store as these are usually decent for local cider. The one in Midsommer Norton was no exception with a huge range and 4 that I had never had before. The journey home flew by, listening to the Stoke v Liverpool game which the visitors won 2-1 and the after match phone in on TalkSPORT. I dropped Anwar off at 11.45, getting home myself just after Midnight. After winding down and getting into bed I eventually dropped off after 2am, meaning I’d only have 2 hours sleep before work and probably need a nap the next afternoon. 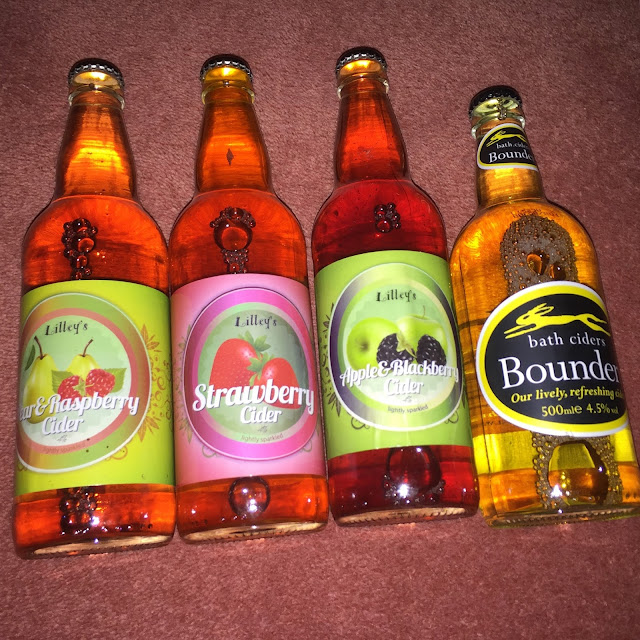 ATHLETIC FIELD is a ground that has seen much improvement following the teams rise up the leagues. The original main stand holds around 250 and access is gained via steps as it is elevated high above pitch level. Next to this is a metal 'arena' type stand where another 200 can be accommodated. There is a decent terrace holding just over 1000 behind the goal where you come in, and a narrow covered terrace along one side. Completing the ground is open standing at the far end. The bar looked excellent with a great range of ciders but I didn't indulge. There was no club shop that I could see and I didn't visit the tea bar. There is a pub a short walk from the ground, though I'm not sure what it is like. 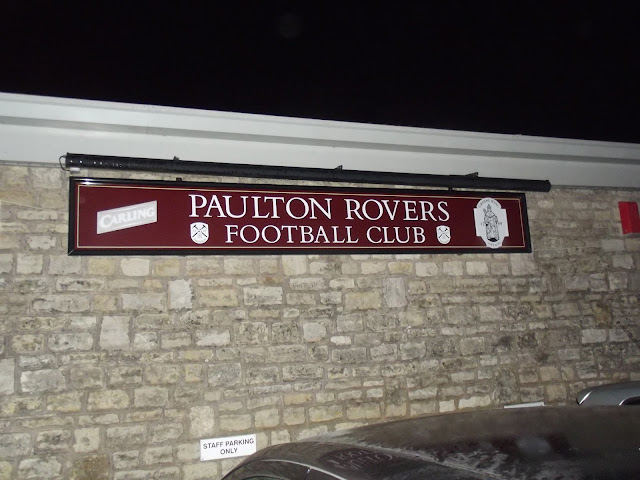 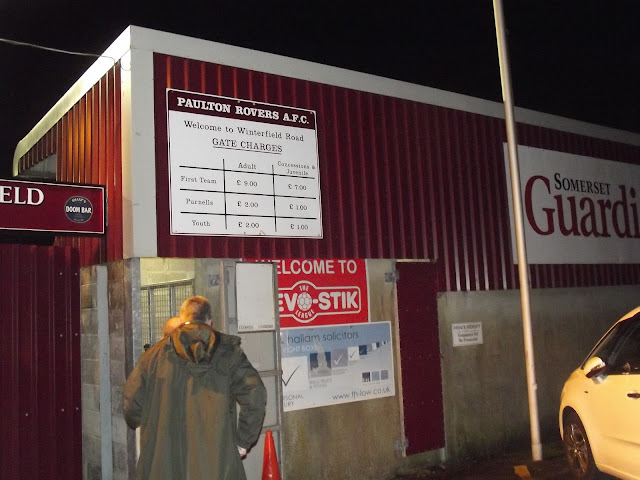 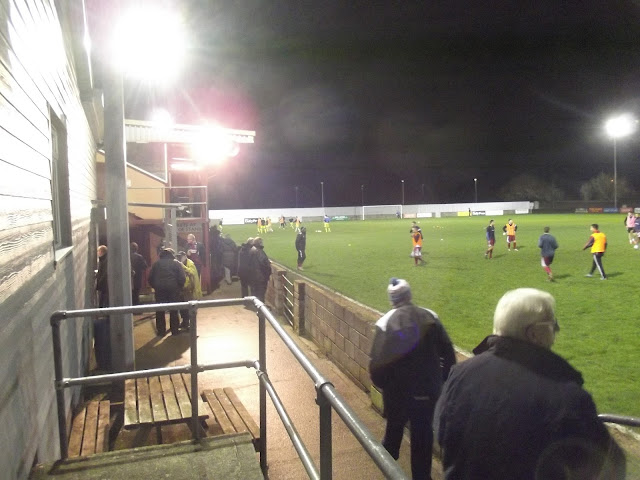 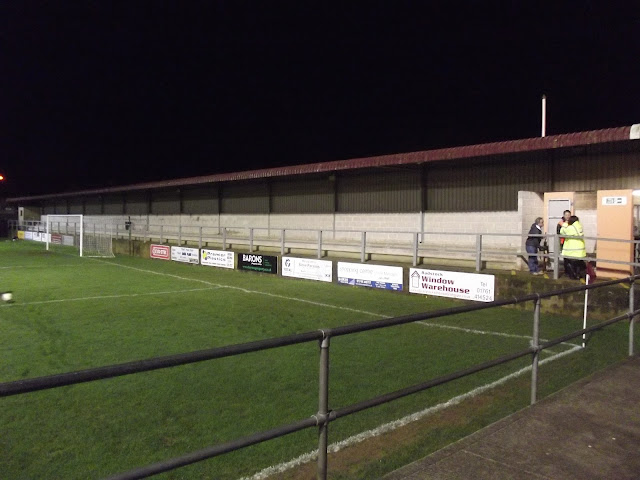 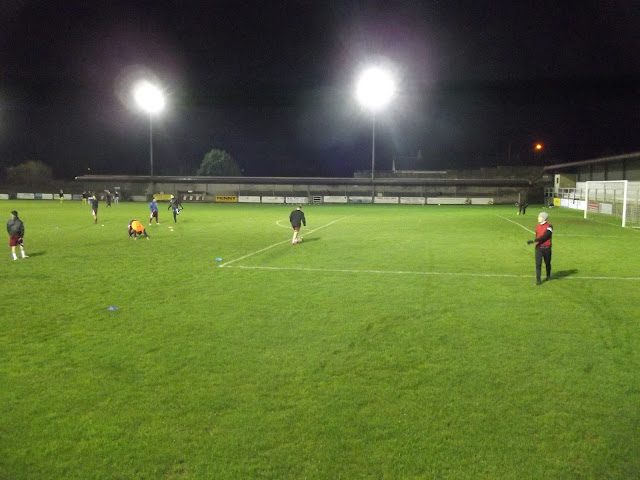 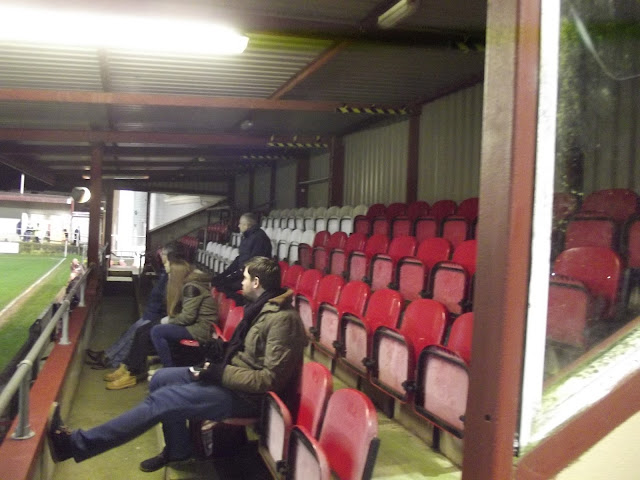 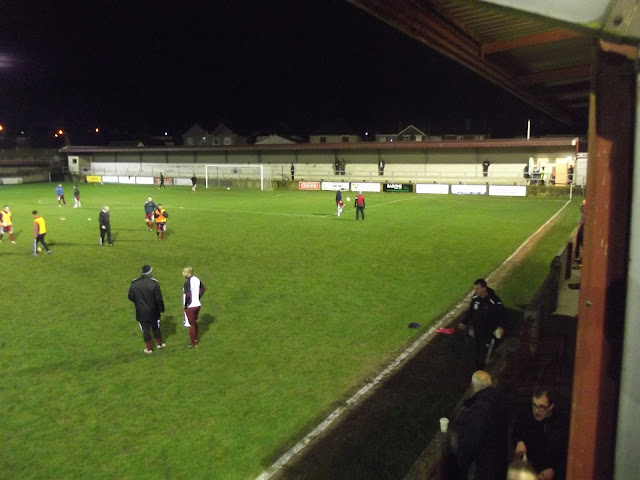 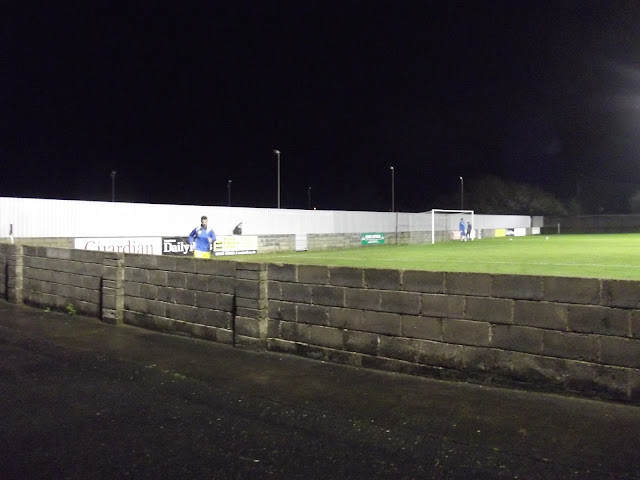 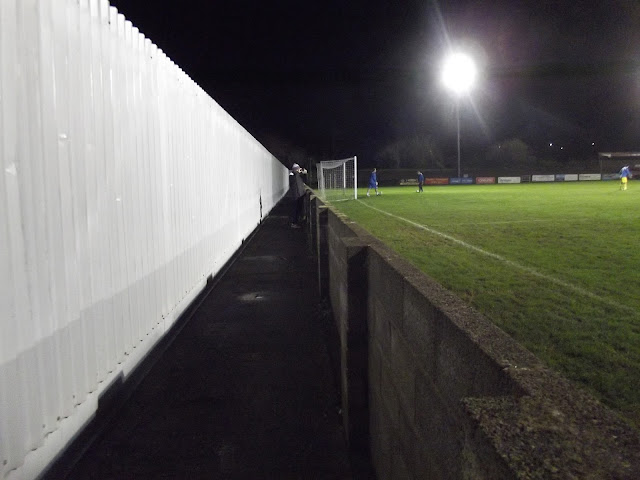 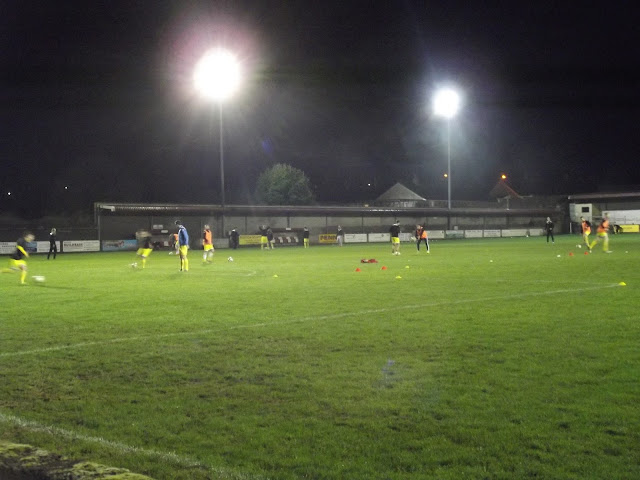 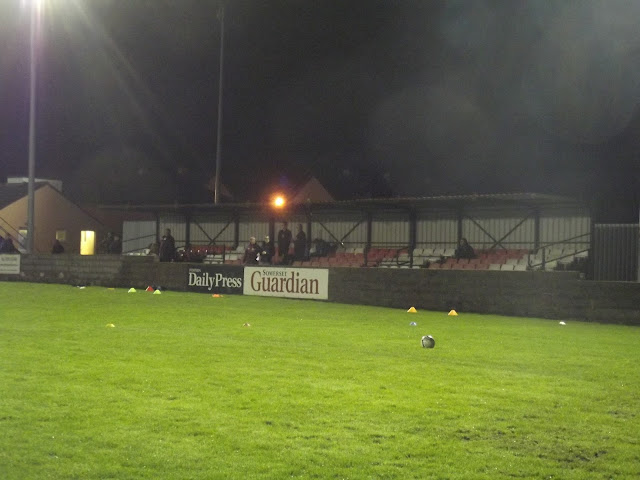 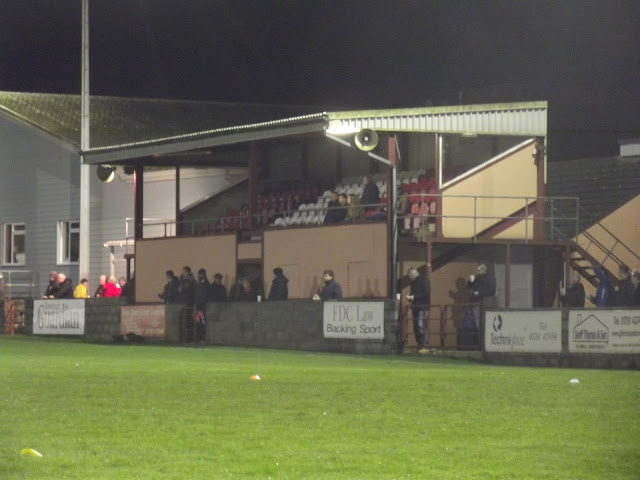 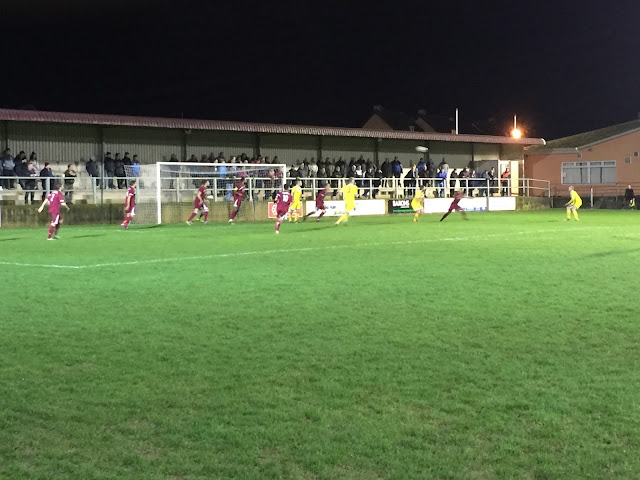 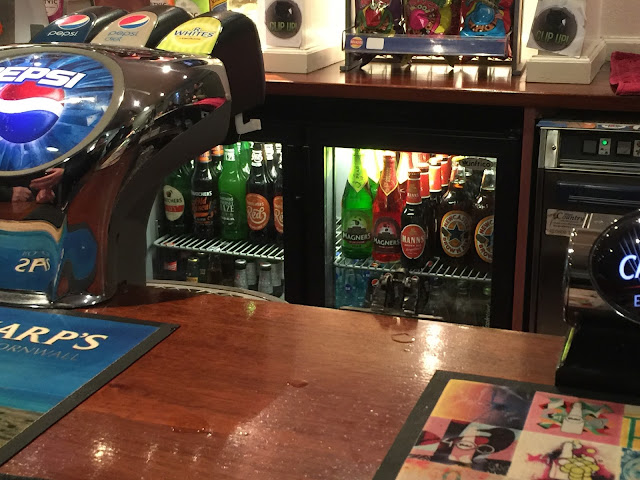 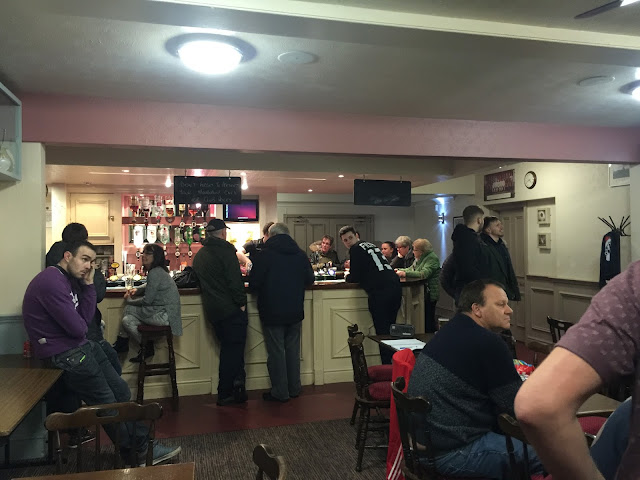 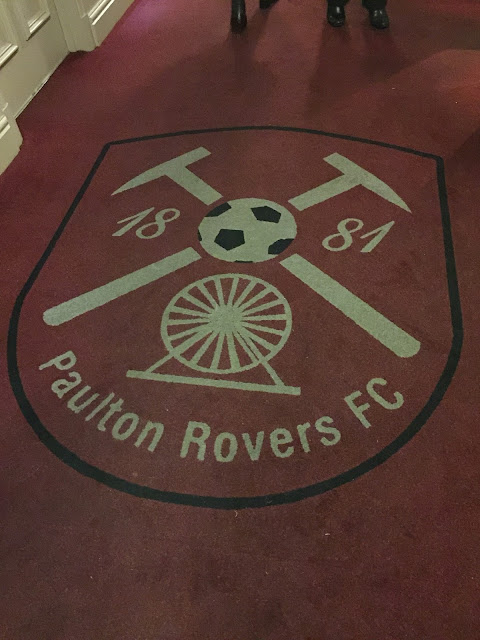