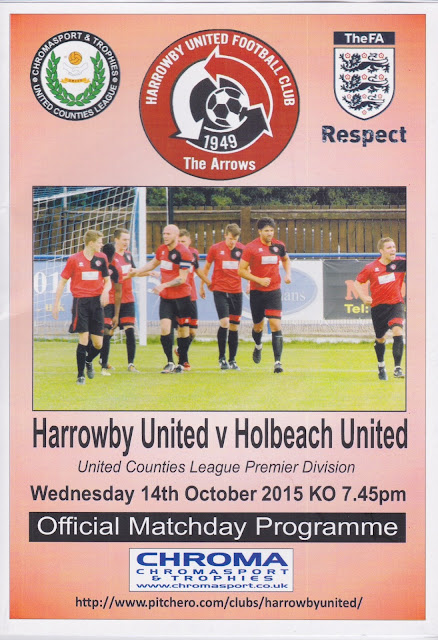 Harrowby United FC was formed in 1949, playing in the Grantham & Lincolnshire Leagues up until 1990 when they joined the United Counties League. Starting at Division 1 they finished in 3rd in their inaugural season, winning the league the following season. However a lack of floodlights they were denied promotion and would remain in UCL D1 up until 2003 when they finished runners up to Northampton Sileby Rangers and were promoted to the Premier Division. Despite finishing in 3rd and 5th in their first 2 seasons at the higher level 2006/06 was a real struggle and they finished well adrift at the bottom, earning just 11 points all season. Instead of going back to Division 1, they chose to play in local leagues again for the next few seasons. For one season in 2009/10, they were renamed Grantham Rangers and ground shared at Grantham Town though after winning just 3 games all season they disbanded before reforming in 2012 back at their own ground. Starting back in the United Counties Division 1, they won promotion back to the Premier in their second season, finishing in 17th place last season. Before the game they sat in 20th place, just above the relegation zone.

Though Harrowby have entered the FA Cup in the last 2 seasons, both games have resulted in defeats against Clipstone and Long Eaton United. 2013/14 saw their best FA Vase run - beating Cambridge Regional College and Peterborough Sports before Graham St Prims ended their ambitions in the 1st Round. 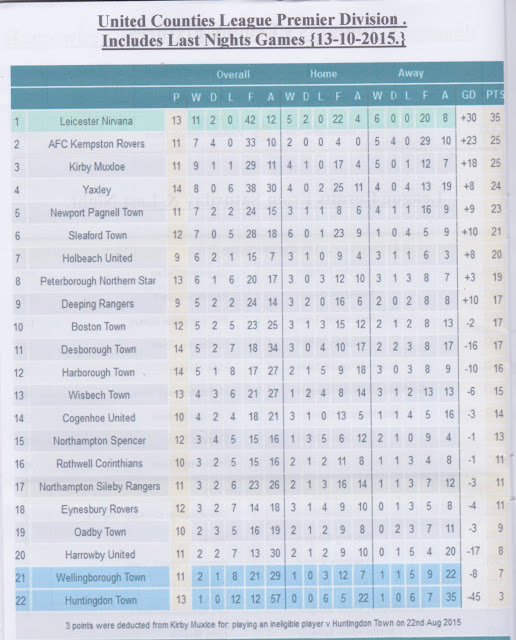 I'd already decided on my Wednesday afternoon game, that was to be at Kidsgrove Athletic as part of my week off. I'd be travelling down from Marine FC, so I wanted something that would not add to much onto the fuel costs. Had money been no object then I'd have been off to Whitby Town, which has been a long term target, But as things were, I'd made a provisional list, the options being Hucknall Town, Belper United, Leek CSOB, Nuneaton Griff & Cinderford Town with me still having no idea on my destination as I left home on Tuesday morning. At the time of leaving my afternoon game at Kidsgrove, I was still undecided where to go. I'd whittled it down to 2 and in the end, chose Harrowby United over Hucknall Town as the half hour walk to town would eat up the excess of time that I had. It was a fairly simple trip, taking around 2 hours. I parked up at Harrowby's ground at 4pm and took the 1.5-mile walk into town. Annoyingly it was raining but thankfully it was not too heavy. My intended dinner place was Wetherspoons but before that I had a look round the shops, buying a Darren Anderton book and some snacks for the game. It was 5.30 by the time I'd finished and so I made my way to the pub. There I had a nice chicken burrito and a pint of Thatchers Gold for £6.75. There was still ages to go before the game so I had myself a half of Black Dragon cider before walking back to the ground. I arrived at 6.45, putting my stuff in my car before paying £5 to get in plus £1 for a programme. There was still ages to go before the game so I sat in the bar reading my programme and catching up on Facebook. 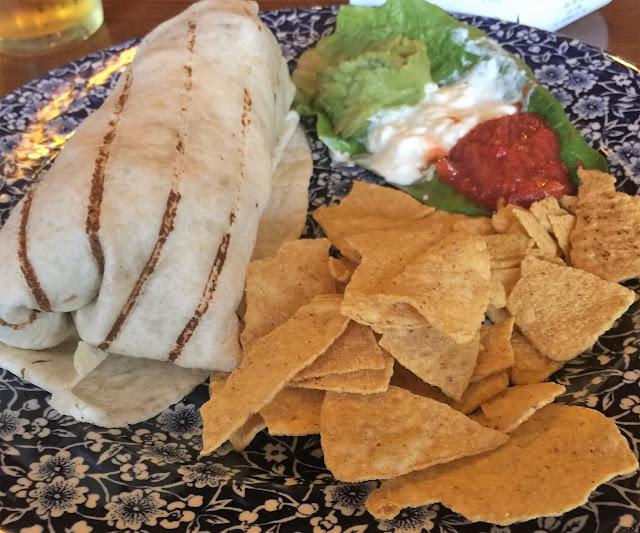 The game started off at a steady pace. Holbeach were slightly the better side but it was the hosts who had the first real chance on 27 minutes when a shot hit the post before deflecting wide. After that, they had the better of the game but it was a fairly tepid affair and that continued into the second half. It looked as if it was heading for a 0-0 but the visitors opened the scoring with a close-range header around the hour mark. They doubled their advantage on 73 minutes with a low drilled shot and looked to be home and dry as Harrowby were offering little going forward. During the game, they were going around with one of those cards where you pick a team and the winner takes the prize. I chose Blackpool and was lucky enough to win £20 which at least paid for my tickets over the past 2 days. Holbeach were emerging clear winners too, making it 3-0 with 10 minutes to go and put the game beyond doubt. After the game, I drove home, with the journey being hassle-free and getting me back home around twenty to midnight. Though I'd done well to keep the costs down, and the £20 I won at tonight's game certainly helped, I had to use my overdraft for a few days. Luckily with Halifax who I bank with, the charges are simple and easy to understand - just a quid a day for each day you are in debt. I never normally have to use it but have had an expensive month. It had also been an unhealthy few days, but at least I had enjoyed myself. I will have a days rest from football tomorrow, before going again with the Western League Hop on Friday & Saturday. 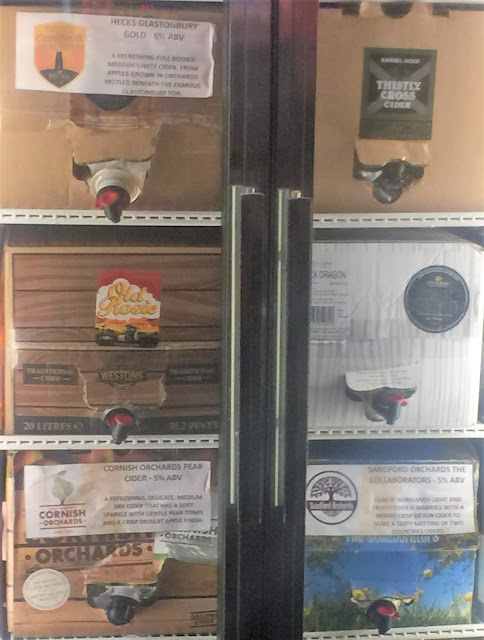 THE ENVIRONCOM STADIUM is a basic but characterful ground. The one seated area that they do have is called 'Stan's Stand' and has space for around 100 fans seated on wooden benches. There are supporting pillars but generally, the view is not too bad. To both sides there is also covered flat standing. Opposite there is some cover in front of the clubhouse, but apart from that it's open hard standing. The ground has plenty of colour and character with not many straight edges to be seen. I didn't use the bar or tea bar, but both seemed pretty standard for this level. There are pubs and takeaways within 5-10 minutes walk but if you fancy a wider choice, Grantham town centre is 30 minutes walk away. Merchandise was limited to shirts (a very reasonable £20) so far as I could see. 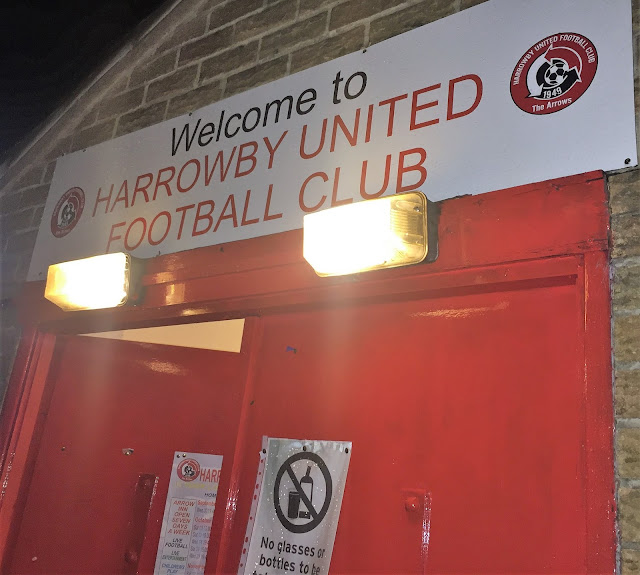 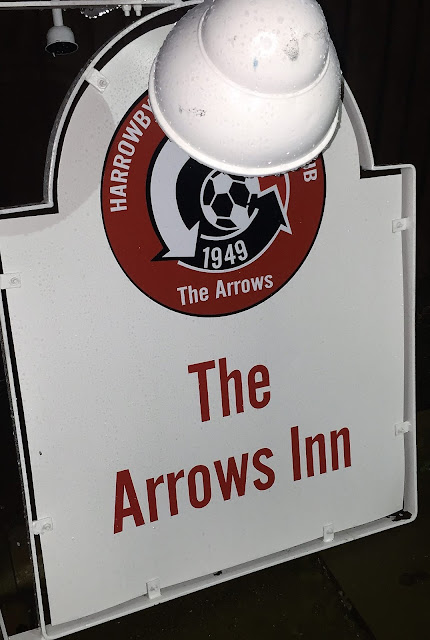 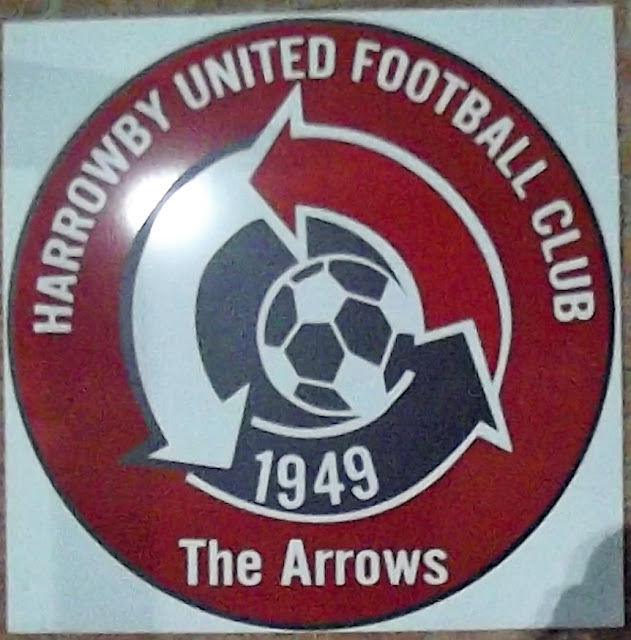 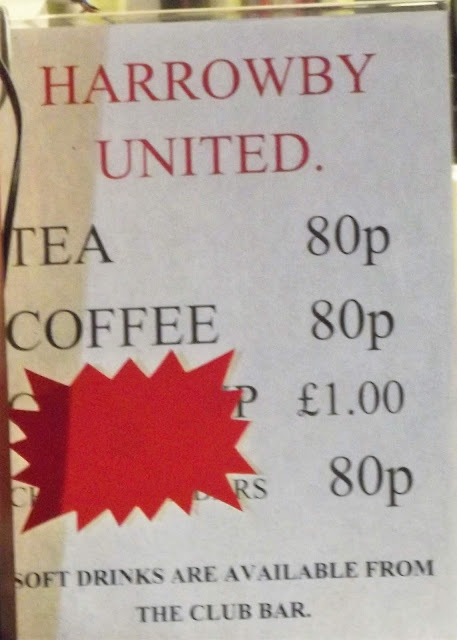 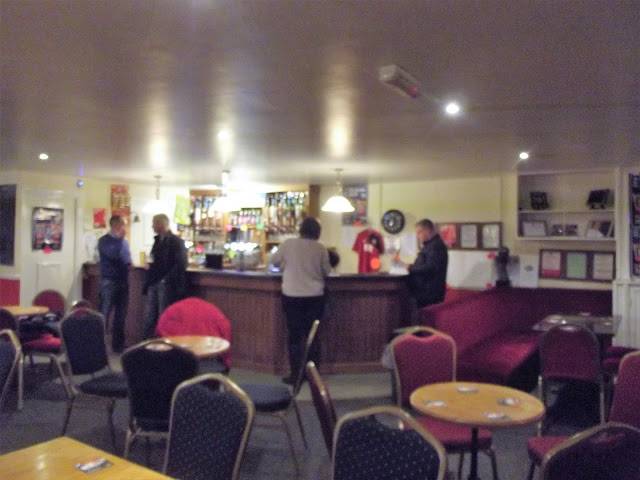 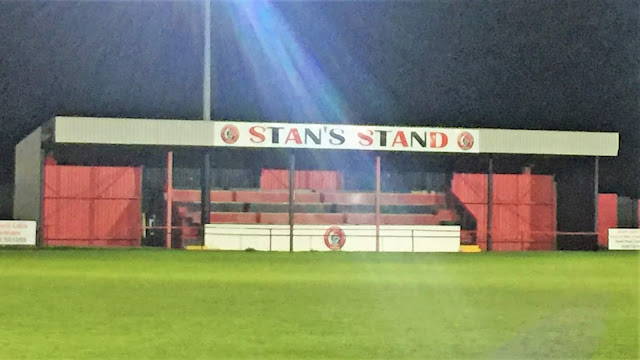 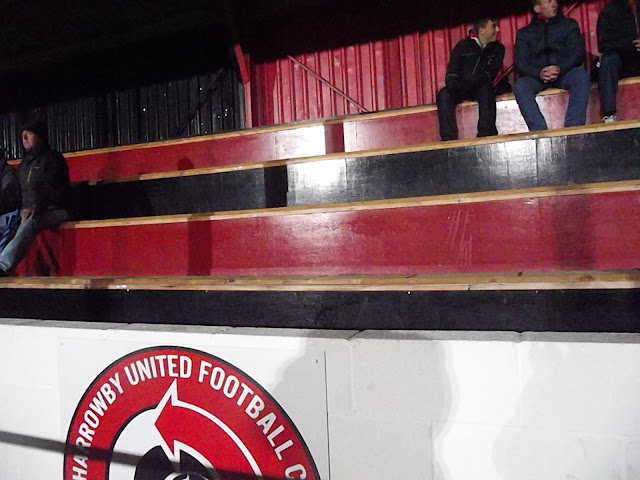 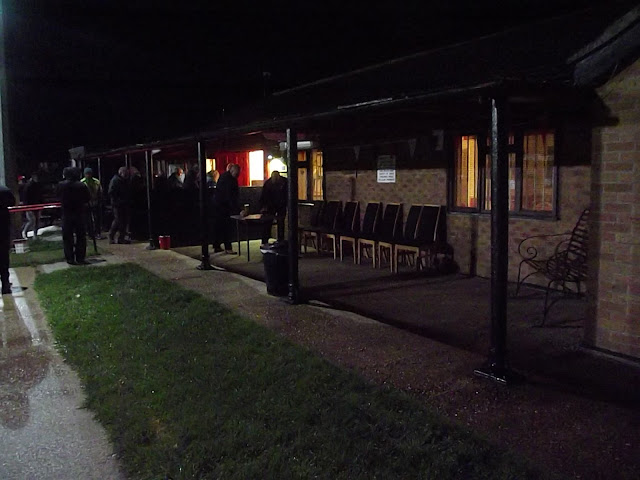 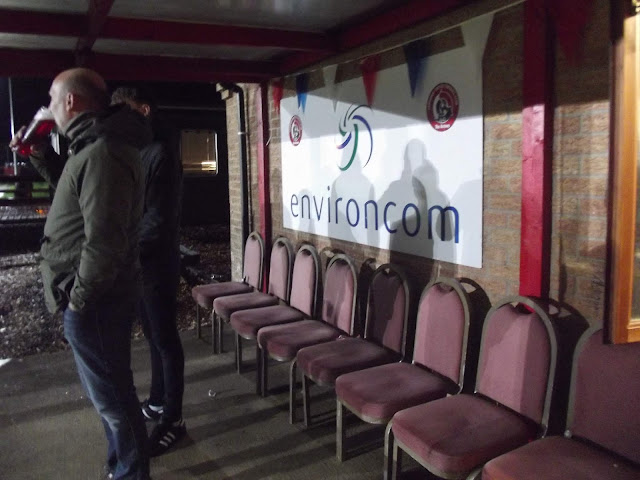 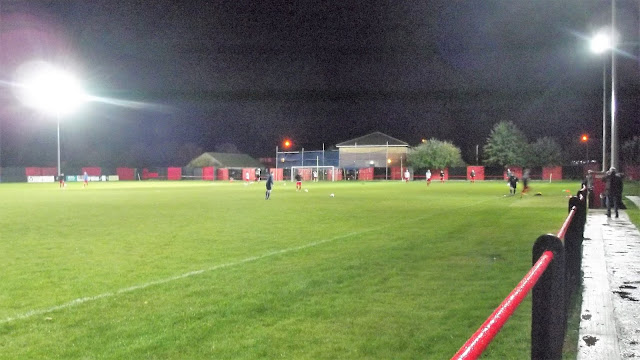 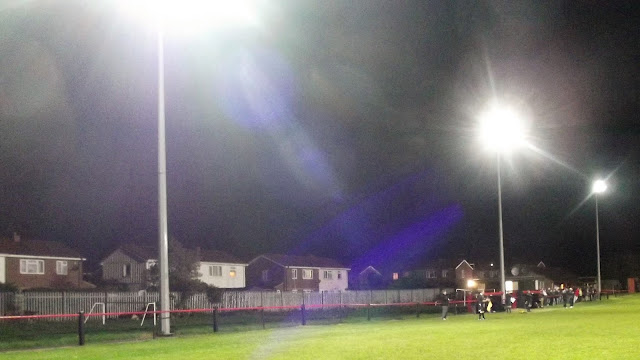 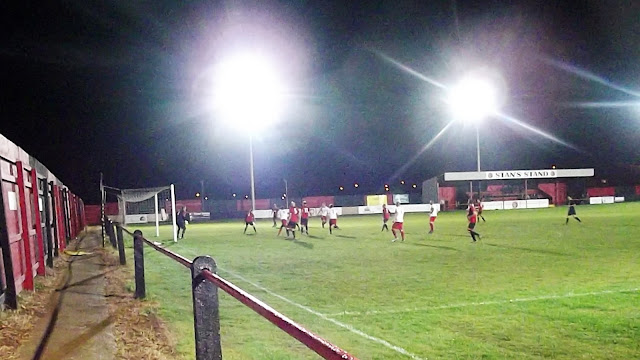 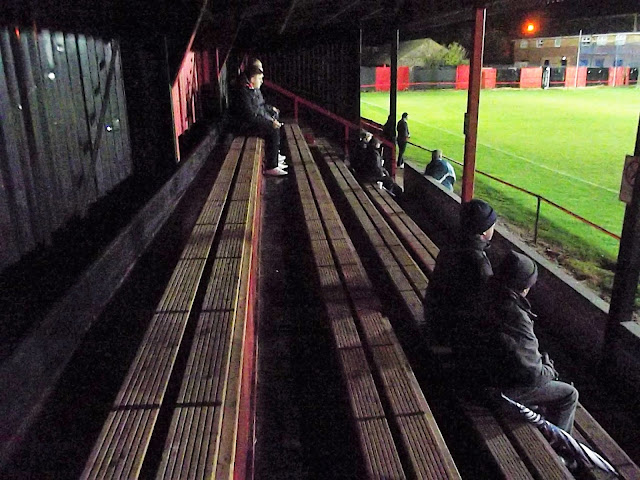 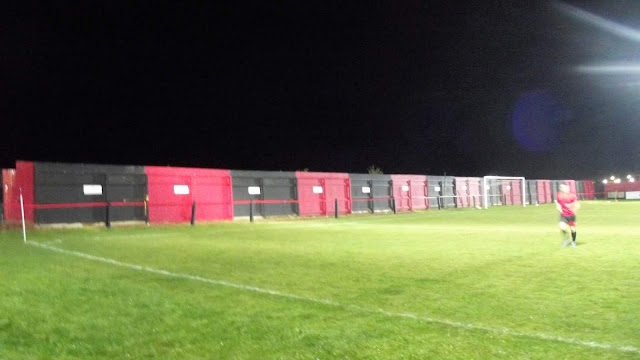