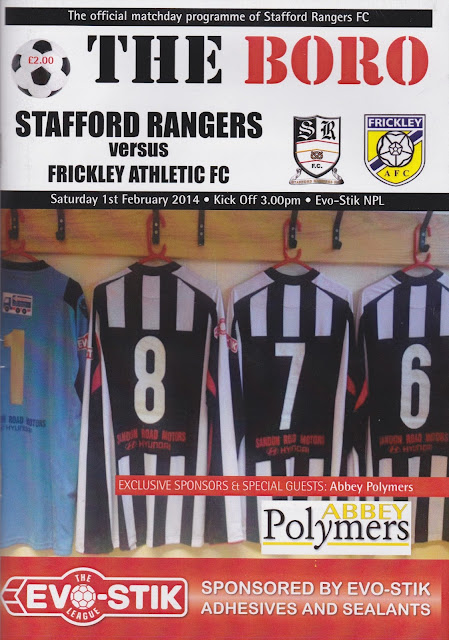 I had seen Stafford Rangers on 3 previous occasions. In my first season of watching Wycombe, 91/92, we had a fairly routine win against them at home, winning 3-0. They were bottom of the table at the time and looked doomed but they recovered to finish in a safe league placing. The next season they really pushed on and had an excellent away record. Indeed they gained a 2-2 draw at Adams Park and were the only team to take points off of Wycombe in a 21 game run where we gained 61 out of 63 points at home. They finished 6th that league, 19 points behind runaway leaders Wycombe and only 5 short of 2nd place. They also provided the opposition for Wycombe's last ever GM Vauxhall Conference away game as a solitary Tim Langford strike provided a 1-0 win at Marston Road for the Chairboys. I saw them once more, the following season. Wycombe were away up north, ironically against the team they were playing today, Bury. So my dad took me to see Slough Town v Stafford Rangers, which the home side won 3-0. At the time, and indeed now, I just loved watching games and my dad used to take me to local games occasionally. Had I thought as I had then I'd be pushing to go and see another ground as I had been to Slough before. From what I remember it was a good game and I recall Slough fans taking the mick out of one of the Stafford players for looking like Denzil from Only Fools & Horses! 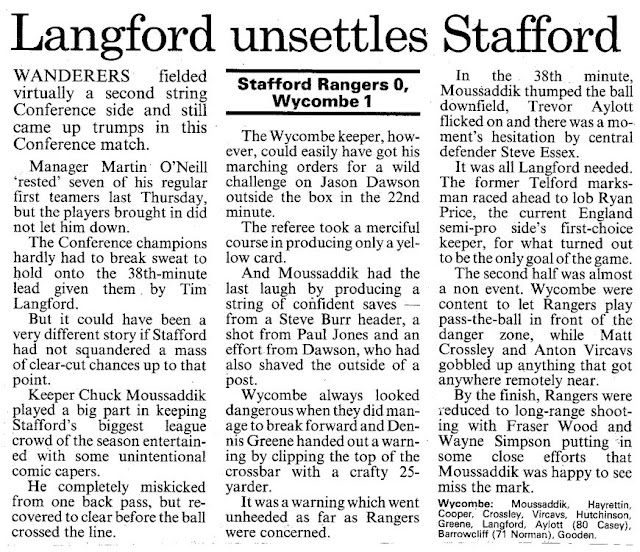 Stafford have had a whole load of big names don the black and white striped shirt. Most famous of all is Stan Collymore. He commanded a 6 figure sum when he signed for Crystal Palace and though he didn't do much there his career really took off when he joined Southend United. From there, his journey is more well known, with him going on to have a good, but all too short career with Nottingham Forest, Liverpool and Aston Villa. The players I remember most from playing them were England semi-pro keeper Ryan Price and defender Mark Bradshaw who played a big part in an FA Cup run in that 1992-93 season, during which they beat then Football League side Lincoln City 2-1. I also remembered Brendan Phillips, one of the few black managers to manage at a good level, he was in charge for the tail end of that season. The success was not built upon however and by the end of the 1994-95 season, the club was saying goodbye to the Conference. In those days that meant relegation to the Southern Premier. The rot had well and truly set in and a second successive relegation saw them in the Southern League Midlands Division. They remained there for a few more years before starting to climb up the leagues again. In amongst FA Cup runs and a 15-0 victory over Kidsgrove Athletic they won 3 promotions and found themselves back in the Conference for the 2006/07 season. They had another good FA Cup run that year reaching the second round and just stayed up by skin of their teeth. However the reprieve didn't last long and another 2 relegations saw them back in the NPL Premier, where they find themselves today. Their prospects of avoiding another relegation does not look good and it's almost certain that they will be relegated again this season. 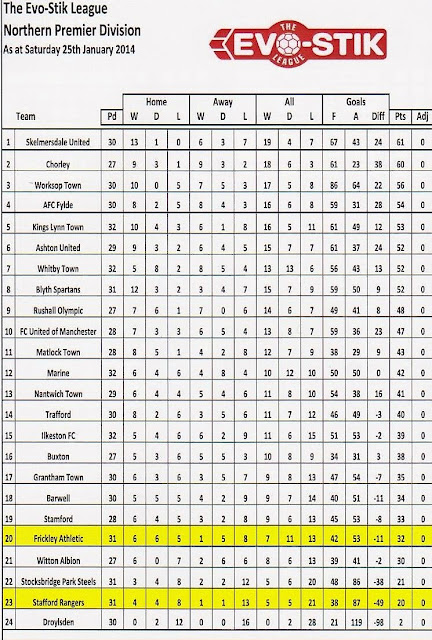 As Wycombe were playing up at Bury, I decided to do a groundhop. Wycombe has been on a poor run of form and I had been to Bury several times before. So in the week, I started drawing up a list of 70 matches that I could potentially go to. But quickly on the Saturday morning this was cut in half, with the weather putting paid to pretty much everything south of Birmingham. So I was left with a few isolated options, one at Chipstead stood out as the only one in the area on. But I wanted to see a game today and the north was pretty much a full bill of health. Plus if the worst came to the worst I could still bomb up the M6 to Stockport Sports and their 3G pitch. My usual ground hopping partner Anwar had already decided he couldn't come as he had his daughter to look after and we could only go a short distance as she gets car sick. I tried everything I could to persuade him, including offering to stop for a bit halfway, but he couldn't be swayed. Probably the right decision on his part, as you have to put your kids first, though I'd miss the company and the contribution towards fuel costs. 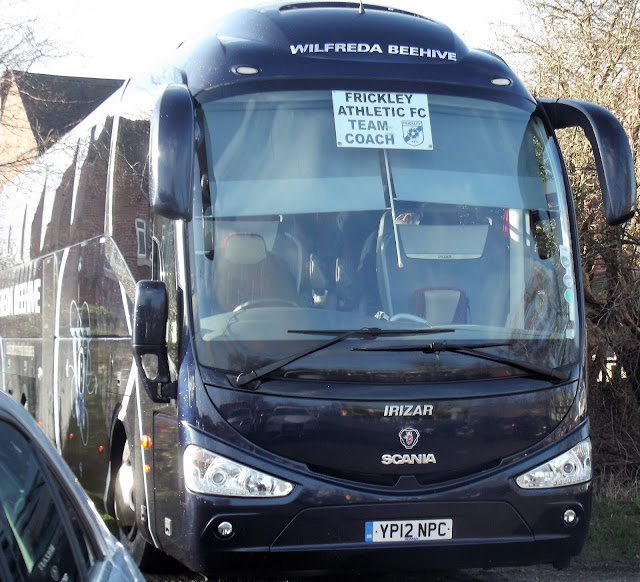 So I was travelling on my own, and it was going to be an expensive day. I checked the list of fixtures that were still on, and opted for one of the most southernmost, and also one that I had wanted to visit for a while in Stafford Rangers. They were hosting Frickley Athletic in a relegation 6 pointer at the foot of the NPL Premier. I checked my CAMRA app to see what there was in the way of pubs, and it looked pretty good. More's the pity, as I had left it so late trying to allow a cluster of more local options to appear, that I would not have time to go into town. It was 11.30 by the time I left. I was at Handy Cross when Anwar phoned me to say Kidlington had announced their game was on. That was actually one of the first choices originally, but I had heard no news on it. But I had seen a load of games around that area were off, and anyway, I was keyed up to go and see Stafford, one of Wycombe's old rivals when we were in the Conference 20 years ago. The first 2 seasons of me being a Wycombe fan were spent in that league and as I was so young I didn't go to many of the grounds. I regretted missing out on the likes of Runcorn whose ground has now gone and whose team have now been reformed as Runcorn Linnets and play in the North West Counties League. But some were still around and I wanted to see them while I could. 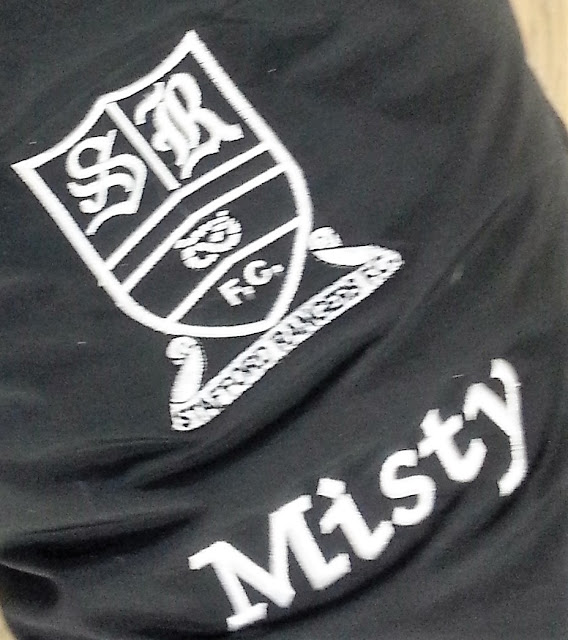 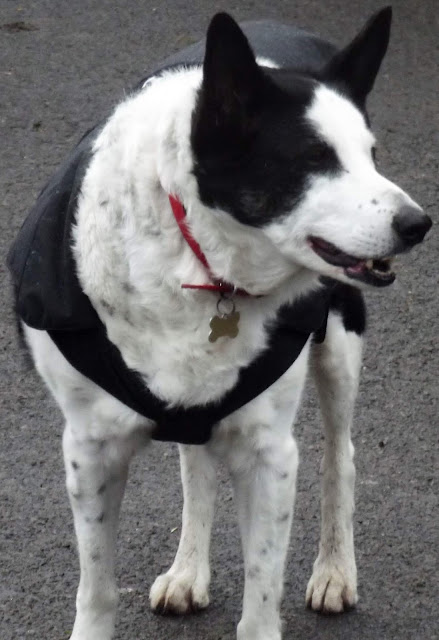 I made reasonable progress up the M40, M42 and then the M6. But the latter was littered with roadworks and average speed cameras which restricted me to 50 MPH and really made that part of the journey drag. I eventually got to near the ground and suddenly realised I only had a few quid in my wallet. So I stopped to get some cash and at the same time some dinner. There was only one place near where I stopped, the Northern Lights Fish Bar. Luckily it turned out to be excellent - a big portion of Chicken Meat, Chips and Gravy was only £2.90 and was delicious. I got to the ground at 1.50 and parked in a nearby road before going into the clubhouse. There were a few bars, all of them looked closed so I went into the door marked 'Members Only'. I ordered myself a pint of Strongbow and checked out what had been happening on Facebook since I left home. After that, I watched the rest of the QPR v Burnley game which finished 3-3. By the time I had finished my pint, it was still only 2.15 and so I bought a programme. 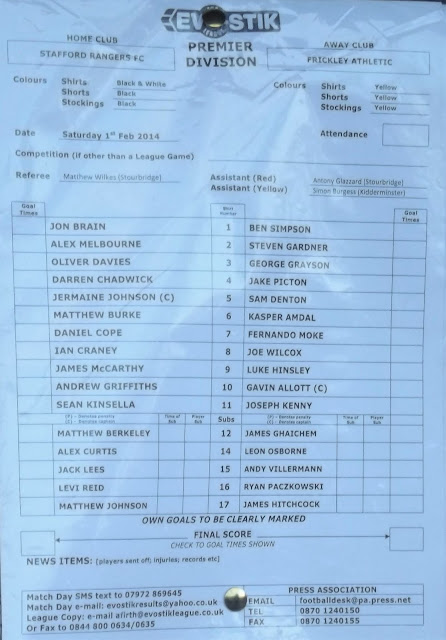 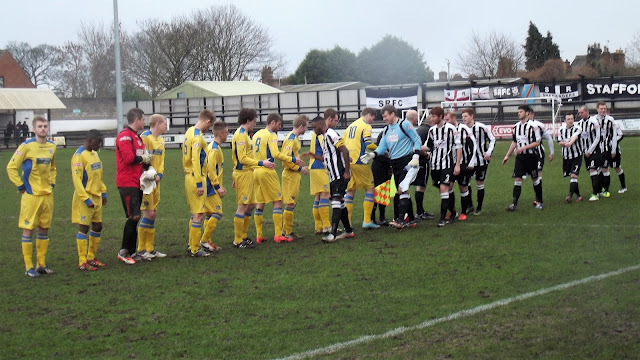 I paid to get into the ground and first port of call was the club shop, to see if there was anything worth buying. Sadly there wasn't - it was mainly full of club clothing and I was looking for a pen or a pennant. So I went out and got some nice pictures of the ground. I then bumped into 2 friendly faces. First, the club dog, Misty. She was a Border Collie and so came ready-made in the club colours of black and white. She also had a specially made dog cover with the club badge on and seemed very much part of the place and well liked by everyone. Then I got my picture taken with Bobby The Badger, the big cuddly club mascot who was recently saved from being replaced. It was getting on for kick off by now and I was getting a bit cold so I got myself some chips and a Bovril and found a place to watch the game from. The report from the non-league paper is below.

To be honest, it wasn't the greatest of games. The home side had a bright start and several good chances before Frickley scored, but once they had there was no looking back. I was also disappointed to learn of Wycombe's 1-0 defeat to Bury. From what I heard we were really poor again and now with only goal difference keeping us from a relegation place, we are starting to look doomed. It had also turned out to be an expensive day too, costing over £50. But I had an enjoyable day, so it wasn't a complete loss. I left straight away and made good progress on the way home. Save for a 5-minute delay navigating around an accident on the M42 the journey was fine. I got back to Wycombe just after 7, stopping at ASDA for petrol and LIDL to get something to drink with Match Of The Day later, arriving home at 7.50. 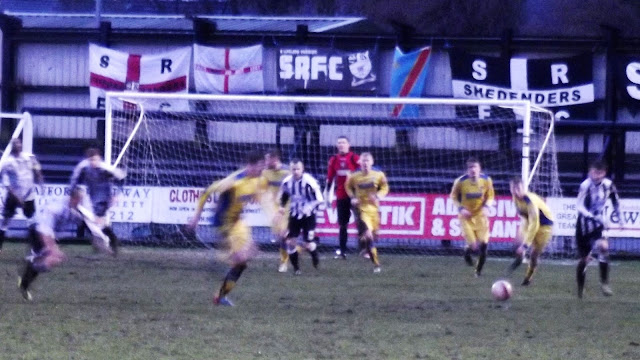 MARSTON ROAD is a traditional non-league ground and well worth a visit for groundhoppers. They are a friendly club too. The clubhouse is split into 2 areas, a big room for the normal punters and a very well furnished members area. The club shop isn't that great for the casual hopper, being mainly leisurewear. The tea bar offers a decent selection at prices standard for this level.

The MAIN STAND has remained pretty much the same for years. That is, apart from the colour of the seats. In an old programme, I looked at they were red and when I visited in 2005 ish they were black and white. However today they are blue and come from Leicester City's old Filbert Street Ground. The SHED END was a covered terrace when I first visited. But according to Wikipedia there was a 2000 seated temporary stand there at one point. Now it is just an uncovered terrace, similar to the Clubhouse End. The LOTUS SIDE is a covered terrace along the side of the pitch, that again has remained unchanged. The CLUBHOUSE END is a small uncovered terrace at the end of the ground where you enter through the turnstiles. The metal wall of the clubhouse is severely dented, due to all the flying footballs. 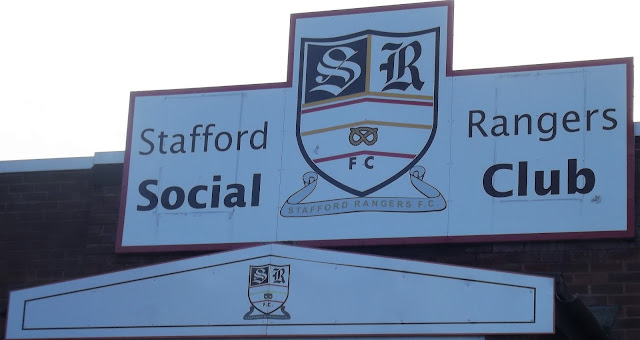 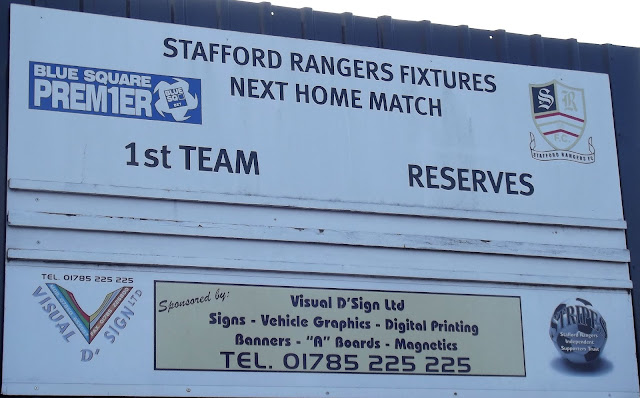 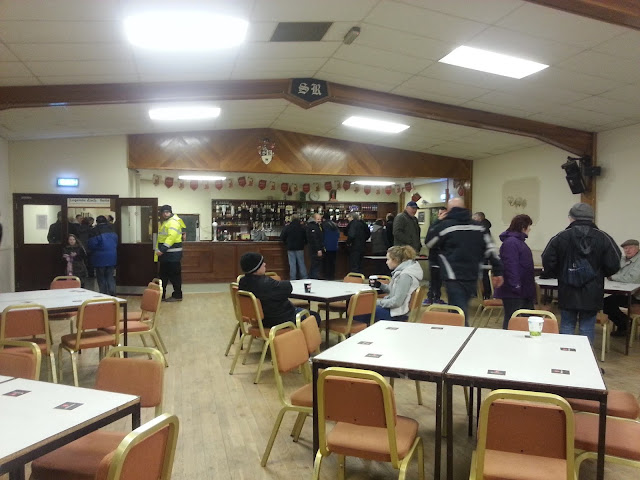 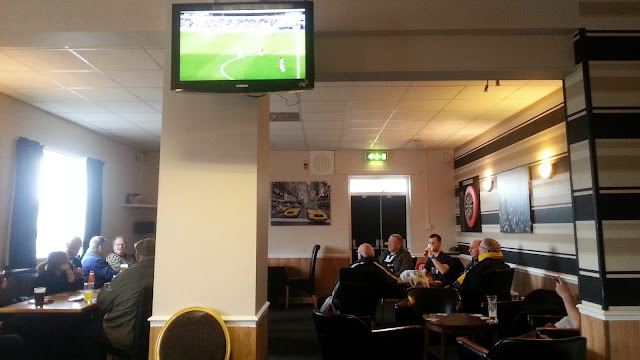 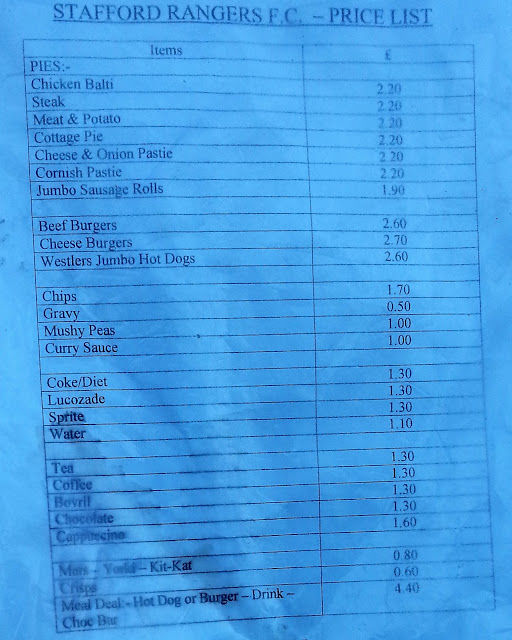 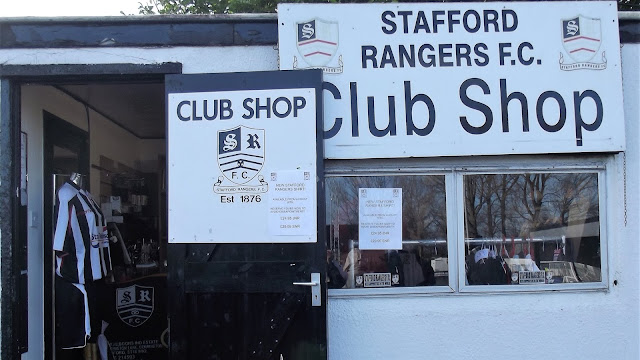 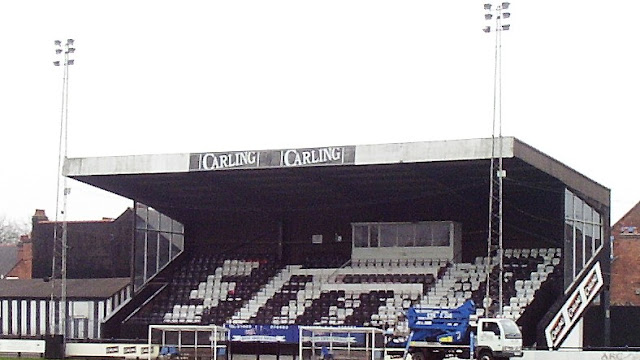 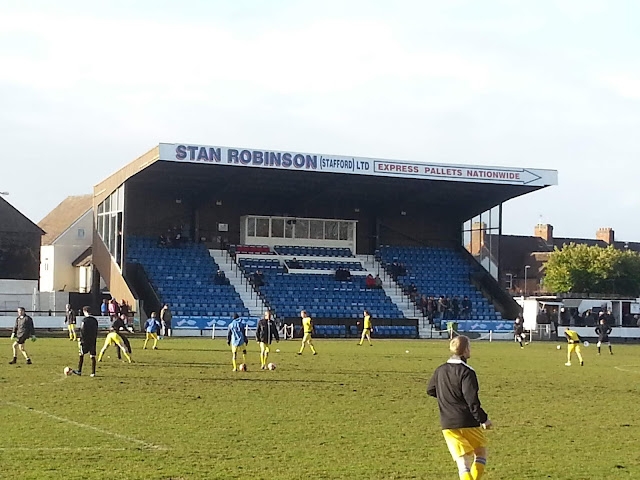 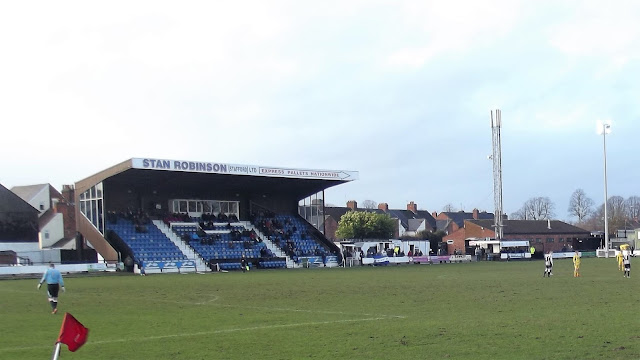 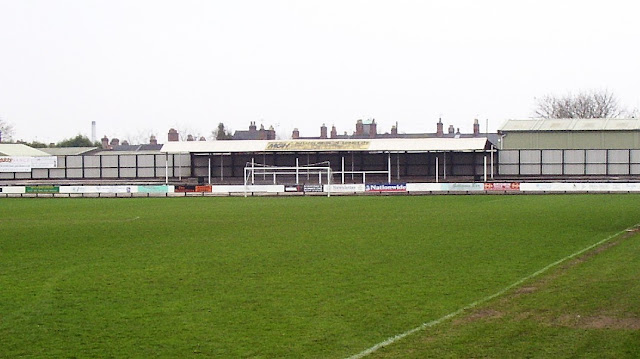 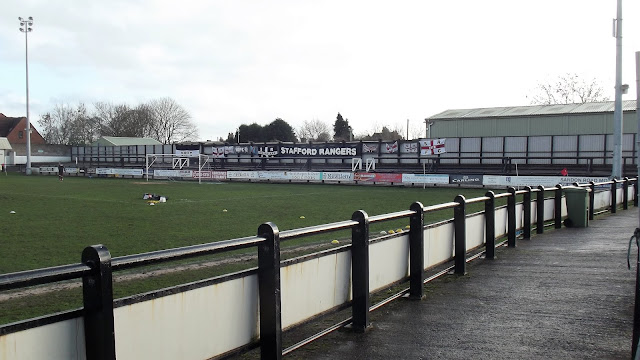 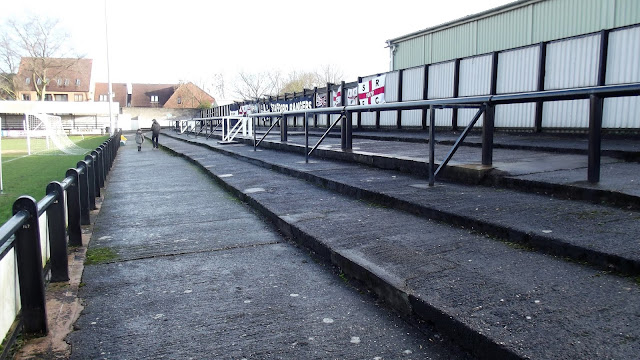 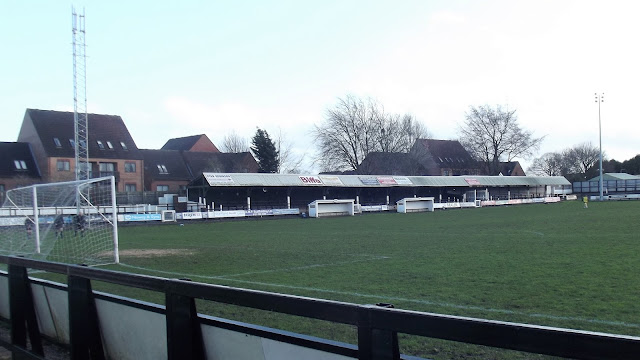 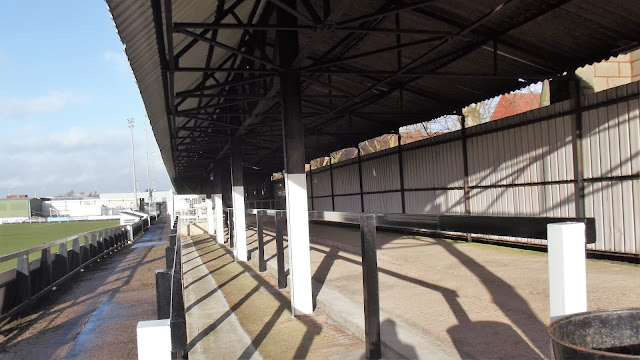 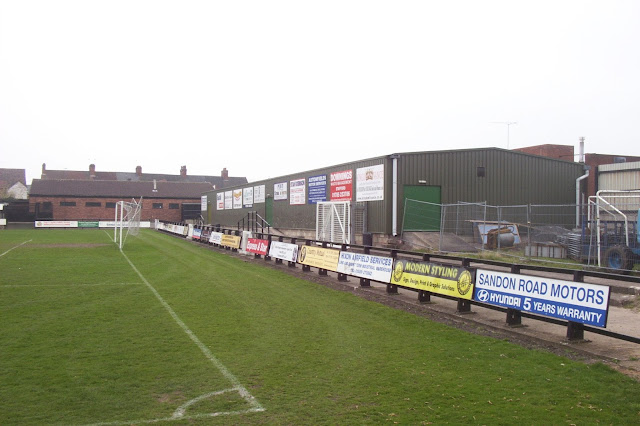