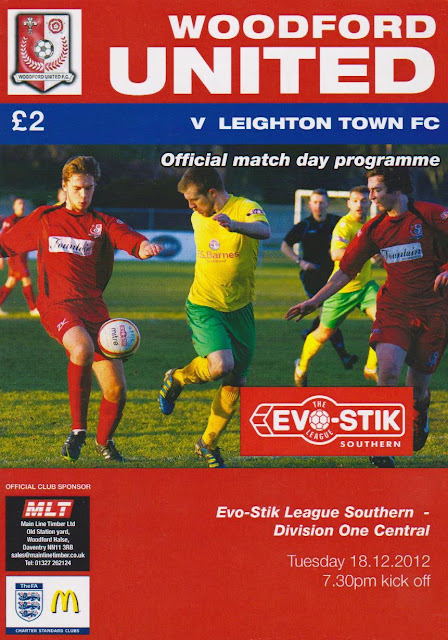 Initially, I had been planning on going to Hinckley United v Bishops Stortford tonight, but this morning the game was called off due to the home side being only able to raise 8 fit players due to a load of injuries and also a transfer embargo due to financial issues. They had already had 3 points deducted this season, and with only one win to their name anyway, were back to zero points. I had been to see them play at Bradford Park Avenue and they had had to select their 42-year-old manager Carl Heggs in the side for that game. It was a great shame as it was a decent ground and they were supposed to have a good club shop. So, what do you do when you can't go and see a team that's only won once all season? That's right, find one with an even worse record! The team in question, Woodford United had lost all 17 of their league games this season. The latest, on Saturday, was an 8-1 drubbing at the hands of Thatcham Town, themselves struggling near the foot of the Southern League Division 1 Central. Tonight's opponents Leighton Town were in a similar position, but they had at least garnered 14 points so far this season, and would surely start as hot favourites given this statistic. I had been meaning to visit Woodford for a while actually. In 2008, whilst on the way to Notts County v Wycombe, I had called in at the ground to take pictures. They couldn't have been more friendly, showing me around and even giving me a free pennant, pin badge and programmes! By far the best welcome I have received! So I promised myself that I would return the favour and go and see a game, and now, finally, 4 years later it was happening. 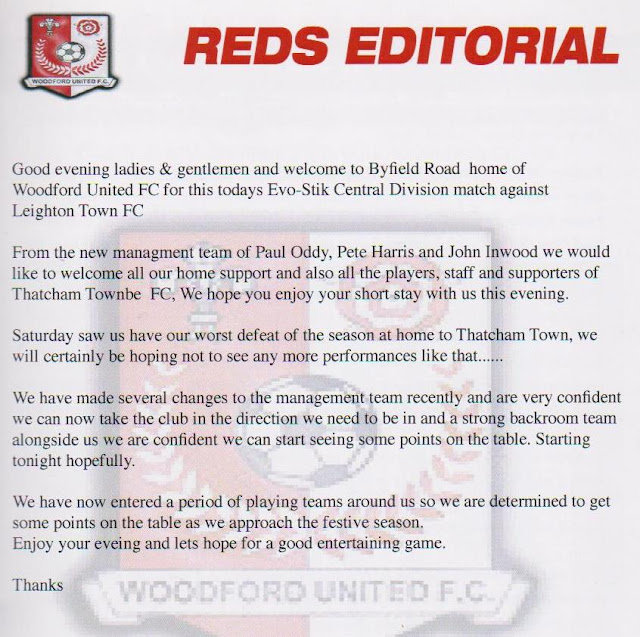 As ever for a random Tuesday game, I was going with fellow traveller Anwar. Due to the destination being closer than most, we didn't have to leave Aylesbury until 5.30, and so I left home at 4.50, allowing enough time for the rush hour traffic. I arrived a few minutes early, but we were soon on our way. After a pretty hassle-free drive, we got to the ground at 6.40. With time to spare we had a look around, going and looking in the clubhouse before going in. After that, we paid our £8 to get in and £2 for a programme. After taking some pictures and checking my phone, it was time for the game to start. 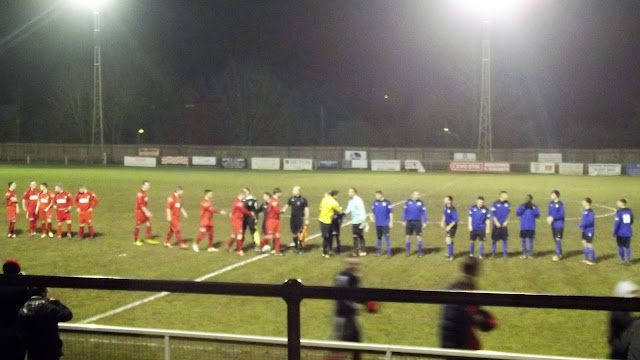 Woodford looked nervous early on and with no confidence and so it was Leighton who started the strongest. And it was the visitors who had a golden opportunity to take the lead from the penalty spot, around 15 minutes into the game. Home keeper Jamie Brassington brought down a Leighton striker and maybe could have been sent off. But he redeemed himself with a great save from the resulting penalty. This seemed to spur Woodford on and they took control of the game. 25 minutes in they took the lead. But this was short lived, Leighton were soon level with a scrappy goal by Chatterton which delighted the travelling supporters. Woodford were soon back in front though, this time through a nicely worked goal with half-time in sight. But Leighton equalised again, this time through Fryer. Woodford's heads did not drop however and 2 quick fire goals made it 4-2 to the home side with half-time fast approaching. A couple more chances were missed, with the hosts looking on course for their first win of the season. Woodford had real chances to sew things up early on on the second half, with quite a few chances missed. A golden opportunity was then presented to them in the form of a penalty, but that too was spurned, the player blazing over the bar. Both sides continued to have chances and it was another penalty that swung the game in Leighton's favour. This time, Leighton keeper Sam Mazurek took the penalty and blasted it home. Leighton were awarded yet another penalty around 10 minutes from time. The keeper stepped up again, but this time it was saved, only for the rebound to be put away by Walton to make it all-square. Woodford's hearts sank at this point, and there was only going to be one winner. The inevitable happened around 5 minutes from time when Leighton got their winner, a second by Walton. The hosts stepped up a gear in pursuit of an equaliser, but it never really looked like happening. 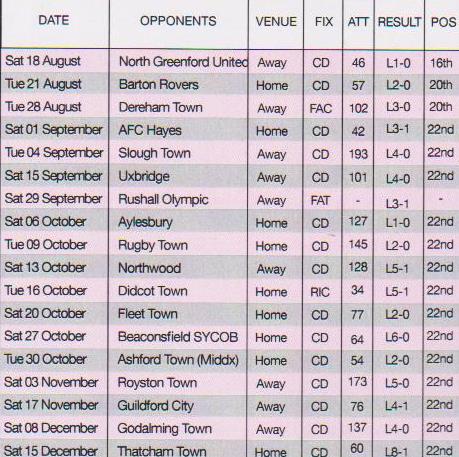 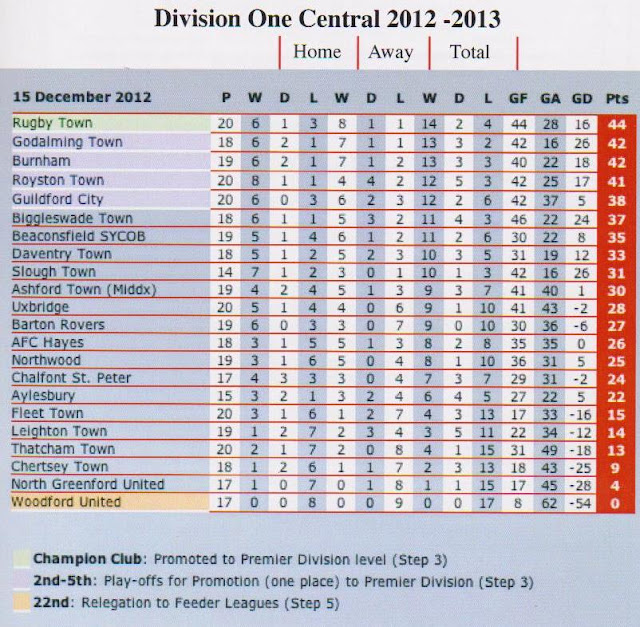 I noted from the programme and the fact that the vast amount of Leighton Town players named as scorers on their Twitter, but not listed in their pen pics, they must have had a huge turnover of players recently. Overall Woodford were very unlucky and should have got something from the game. But there defending was not the best, and that's 21 straight losses in all competitions this season. The last time they won was 25 games ago, back against Chertsey Town on 7th April 2012. It was a great game for the 49 fans in attendance though and a shame that the hosts couldn't get a share of the spoils. After the sparse choice of food at the ground, we stopped off at a local Chinese takeaway for some chips and it was nice to see them displaying a Woodford United scarf. I dropped Anwar off, getting back myself at 11.15. 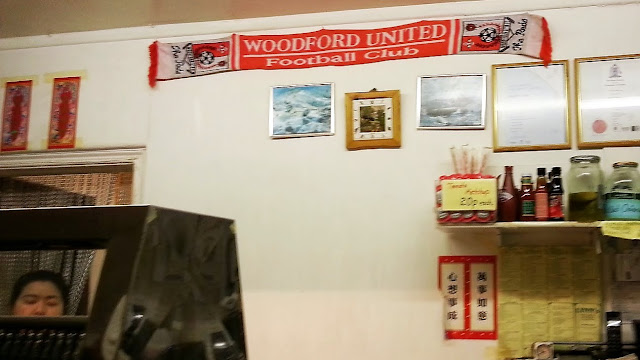 BYFIELD ROAD is a pretty basic ground, but pretty much the usual standard at this level. There is an 'Arena' metal stand along the side, holding around 150, but this at least is raised, so you get a decent view of the action. The only other covered area is some standing behind one goal, and a small section of covered standing along the side, whilst the rest of the ground is open to the elements. Due to the small crowds though, there is little danger of you having to stand in the open. The ground is set in the countryside, so quite a nice setting. I didn't see a club shop, but I know that they sell various bits online and in the club bar. The bar itself is pretty good, especially for this level, with big screen TV's and a fairly decent selection of drinks. The tea bar is very basic, only doing bacon and sausage rolls, along with drinks 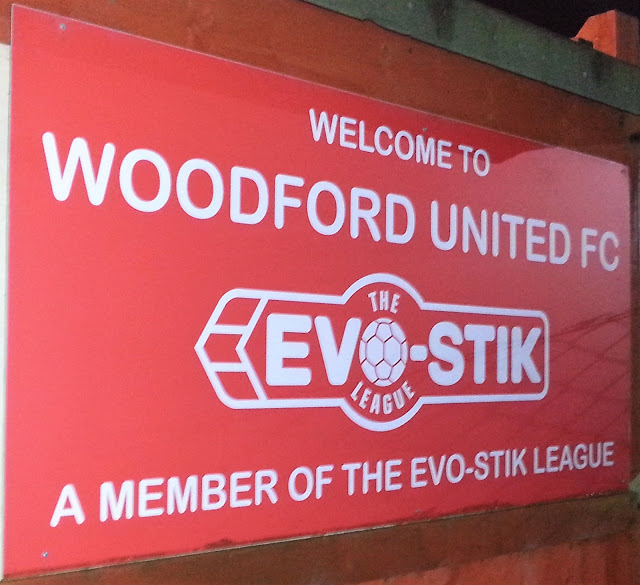 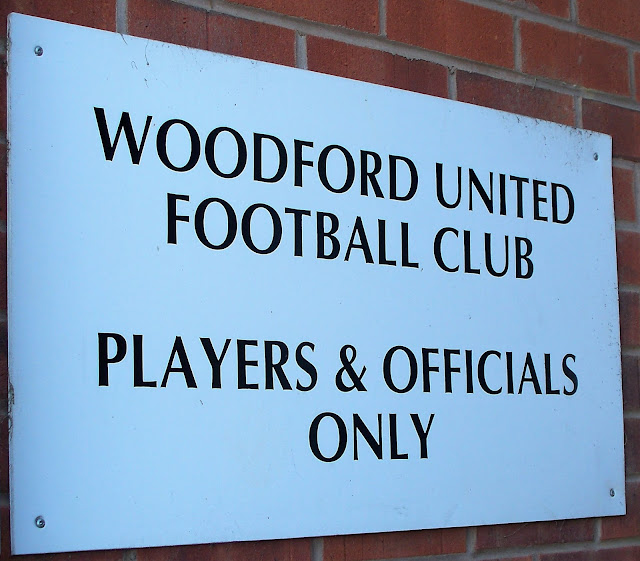 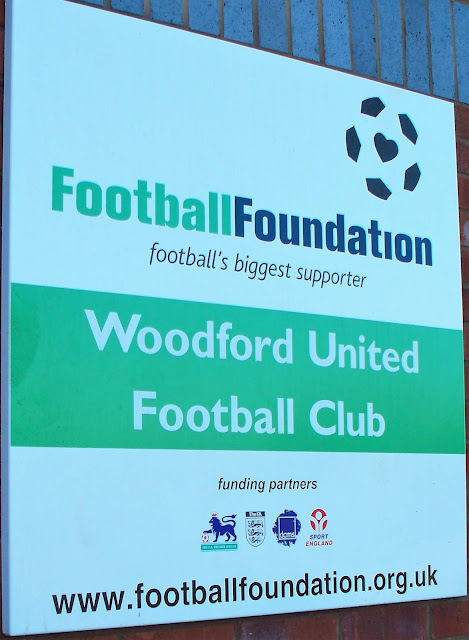 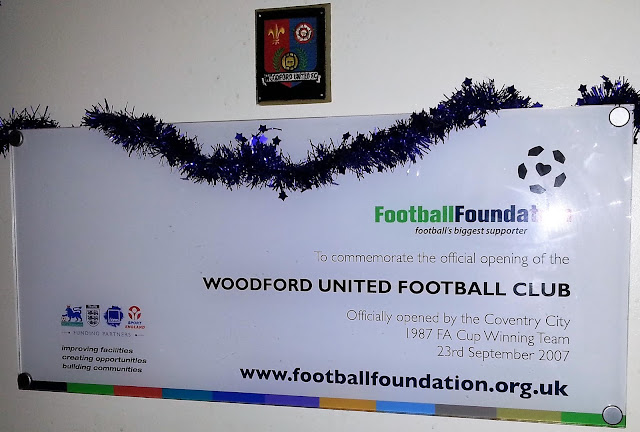 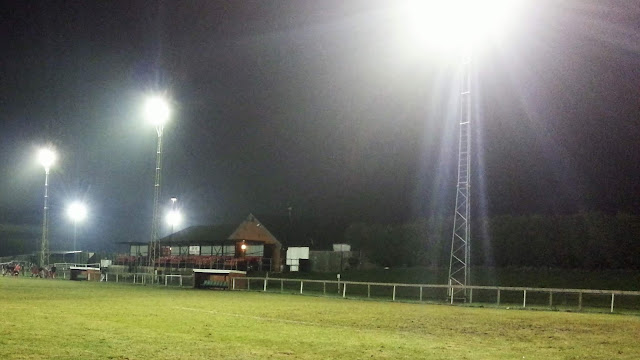 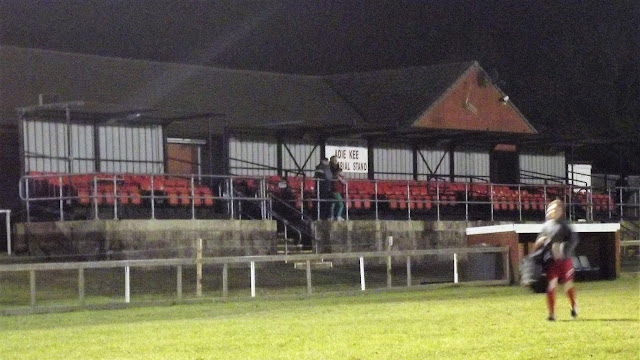 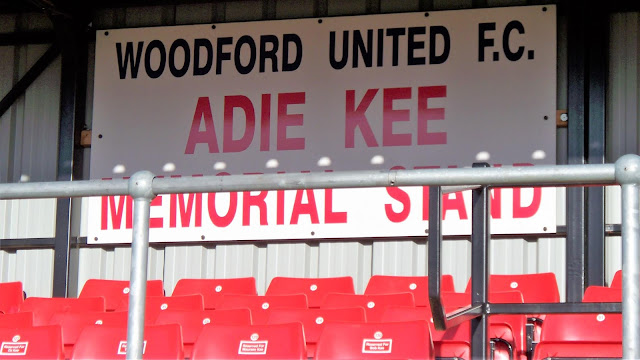 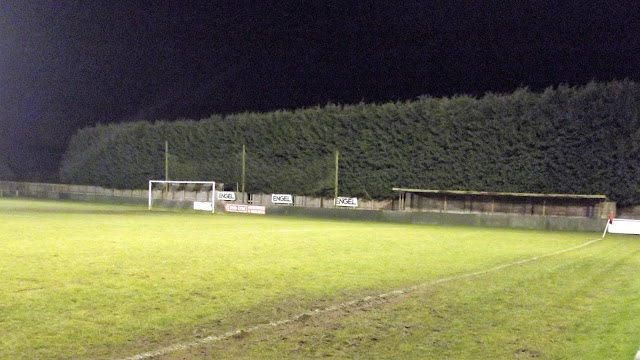 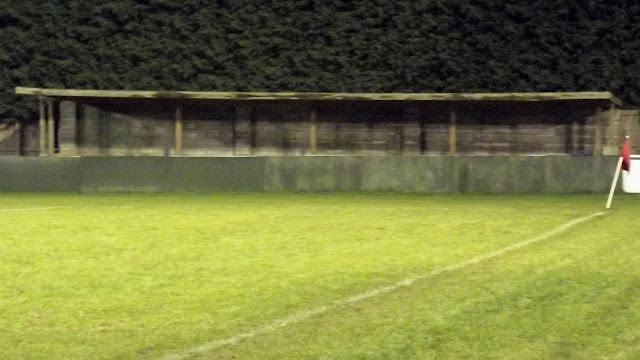 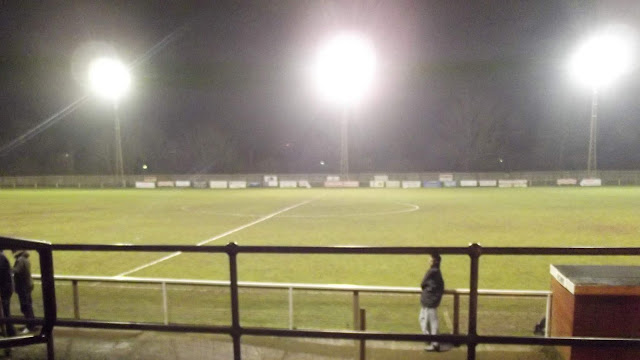 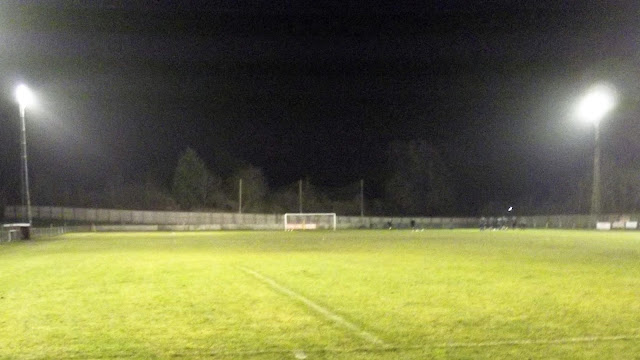 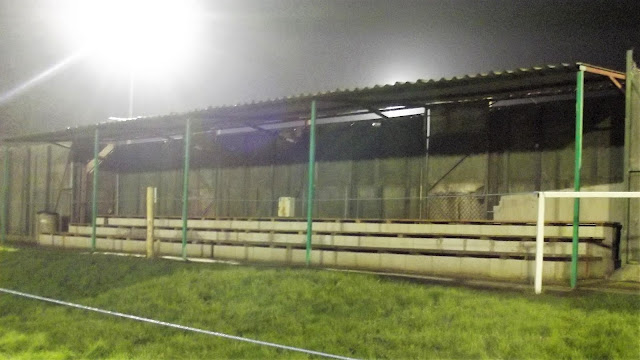