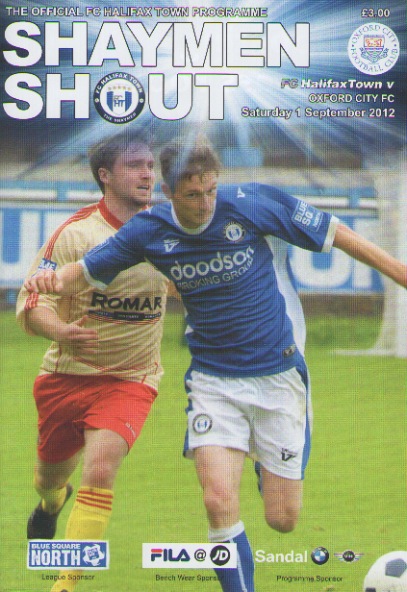 When I went on the Oxford City message board in the summer, to find out about Wycombe's pre-season friendly there, I was initially disappointed as it had been cancelled. But one thing caught my eye. Oxford City had been promoted via the Southern League playoffs and due to the disproportionate number of Southern clubs at the step 2 level had been placed in the Conference North. So, to help out with costs they were selling spare places on their team coach for a tenner each. So a real bargain way to see a game at some of the Conference North grounds, travel wise at least.

Sadly there wasn't a huge amount of choice, owing to my commitment to Wycombe home games. But one that did come up was the trip to Halifax on the 1st September. Having only having been to Halifax on the way back from Bradford to take pictures, this was a good opportunity to see a game there. And add in the fact that Halifax seemed a great town with some good pubs, plus the fact that I knew a couple of people up there, my mind was made up. It certainly beat the idea of going to Southend for the umpteenth time with Wycombe, especially with team manager Gary Waddock's less than inspiring management decisions in the recent home games. The last of those team games had been abandoned due to a thunderstorm at the request of Stan, the Wycombe safety officer. Bristol Rovers were leading 3-1 at the time, Wycombe had been pretty woeful and didn't look to have any chance of getting back into the game. So you could understand their frustration at it being called off. Initially, their manager Mark McGhee agreed that the right call had been made. But their fans and Chairman didn't agree. After the game, a small number of Rovers fans proceeded to smash up the away stand at Adams Park, later attacking the ticket office too. And in the week their chairman confirmed that he was putting in a complaint to the FA so that they could look into the abandonment. It hadn't been a great week for Wycombe. Despite bringing in 3 players on short-term deals and Waddock denying that Jo Kuffour was an addition to our strikeforce and not a replacement for Beavon, we eventually succumbed to Preston North End's advances and let our star striker go. Sadly the reported figure was £250,000 - a paltry sum given the player's immense talent. I wish Bevs all the luck in the world, but can't help but think a move to play under Graham Westley may not have been best for his footballing career.

Going back to the initial subject, it was ironic that the only other abandonment requested by a safety officer came against Oxford City. Back in 1998, the 2 sides were deadlocked at 1-1 in an FA Cup 1st round replay. With the game about to go to penalties, an electrical fault behind one of the stands, leading to a potential fire was discovered. So on the grounds of safety, the game was called off just as the players were getting ready to take penalties. City were gutted to lose their chance of going down to the lottery of a penalty shootout. But they acted with decorum and accepted their fate. The third duel between the clubs, another replay, was played at Oxford United's old Manor Ground. Despite a brave performance from the non-leaguers, Wycombe squeezed through 1-0.

After a restless nights sleep, I awoke at 7 and got ready. After faffing around and leaving later than I wanted to, I left at 7.40 am, having to be at Oxford City's ground by 8.30. Sadly this meant I had to miss out on my breakfast sub from Subway that I had been looking forward to for ages, only having time to stop for a paper. Instead, I had to settle for a couple of Mars bars and some fruit for breakfast. And they say it's the most important meal of the day. I got to Oxford City's Court Place Farm stadium at 8.15, leaving enough time to sort all my stuff out before the scheduled departure. City's ground is a smart, compact modern stadium, which I had been to 3 times before - twice for pre-season friendlies with Wycombe, and another time for a Southern League game against Farnborough. There were several ex Wycombe players on show that day, indeed Oxford City and Wycombe have shared several players over the years. The most notable was probably Jermaine McSporran, who after being bought by Wycombe for a fee of £75k, looked like he was going all the way to the top. Sadly injury cut short his career and he ended up playing for local league teams all over Oxfordshire. Sadly there were no such connections, the most recent one being last seasons long-term loan of goalkeeper Jason Mooney. Despite winning the player of the year at City, he was released by Wycombe and signed for Tranmere. I'd not be surprised if he went on to do well, I feel that Waddock had made a mistake.

After picking up fans from Bicester and Northampton, we were well on our way up the M1. On a plus note, I bagged myself a double seat to myself - there is nothing worse than being cramped up with someone else on a long journey. Annoyingly though, the portable battery for my phone was not working as it should have been. With my HTC Desire HD's piss poor battery this was most unwelcome. I am so glad I am getting a new phone at the end of September when my massive 2-year contract expires. After a stop at Woodhall services for the driver to have a rest, we drove through the rest of Yorkshire, stopping for an hour and leaving just after 12. It was just after 1 that we arrived in Halifax. After a quick look around the town, I made my way to a recommended pub, The Three Pigeons, for a much-needed pint. At the shops, I got a new lead for my phone charger which fixed the earlier problem that I had. Also an Inbetweeners book and a copy of Olympic Soccer for the PS1. On the drinks front I got to try a new cider. A Whisky Cask cider from the Udders Orchard brewery which came in at a rocking 7%. After that, I went in search of food. The local cafe closed just as I got there, so I picked up a few bits from the local shop. 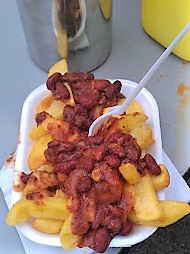 Halifax are one of the biggest teams in the Conference North and Oxford City were one of the smallest, so the visitors would have to be at their best to get anything out of the game. The last time I saw Oxford City was in an FA Cup tie at at Burton Albion in which they gave a great account of themselves before going out 3-2, a similar performance today would be just what they were looking for. After paying £13 to get in, I spent another £3 on a programme and finally found some food - chilli and chips for £2.10. The game itself started well for Oxford City. With the first chance of the game, the Halifax keeper parried the shot and another player followed up. It didn't last for long - within a minute the home side were level when Dale Johnson scored. They took the lead just before halftime too, Paul Marshall the scorer. Oxford had a good shout for handball but the referee said no. As City tired, Halifax added a third when Johnson got his second of the game. Overall it was a dominant win for the home side. After the game I had to wait for the team, it was well past 6pm when we finally left. It was a long journey back and it was pushing it as to whether I would be back for Match of the Day. In the end, I made it, just getting in as the opening titles were on, that was after getting back to Oxford City at 10 and driving back home in 30 mins. It had been a long but enjoyable day. Oxford City were a really friendly club and I hope that the opportunity to do more away games with them arises as a tenner is great value for travel to far-flung northern towns. 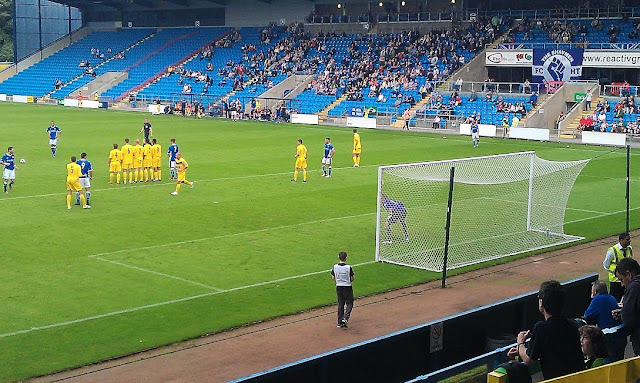 THE SHAY is really a football league ground and is too big for the team's current level. Which is why they open 2 sides. Firstly a huge seated stand which must hold around 6000. Away fans are given one end of this. At either end of the ground, there are big terraces holding around 3500 each. Only one of these is open and is given over to home fans only. All 3 of the stands mentioned so far are really modern and offer great views. The one remaining stand is an old seated stand, holding around 2500. This has pillars to hold the roof up, so it isn't as good as the other stands.

The food in the terrace is nice and reasonably priced, which was a pleasant surprise as I had heard it was a rip off in the seated area. There are also proper bars in each stand with club memorabilia on the walls. The range of drinks is pretty basic with only Magners on the cider front, so you would be better nipping into the nearby town centre for a few pints, as mentioned above, The Three Pigeons is excellent. As for a club shop, I can't say. I couldn't see one outside the ground, and the one inside was closed. Overall Halifax is a great day out with a decent town and a good stadium to watch football in. 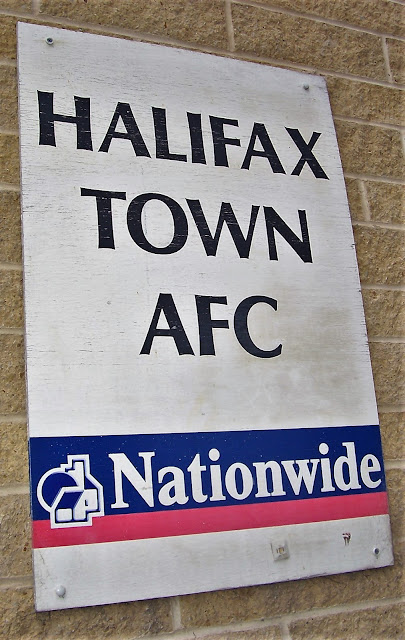 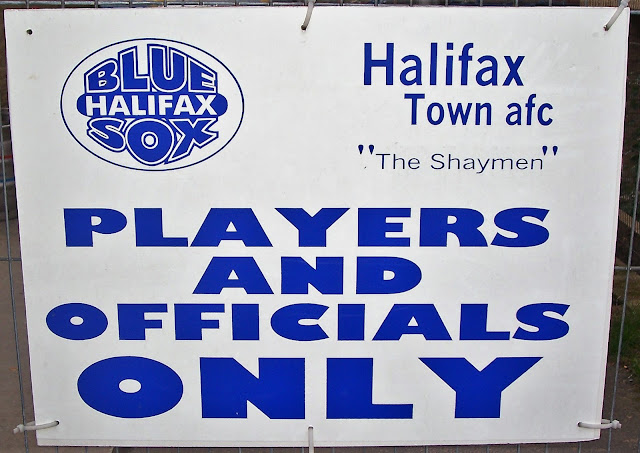 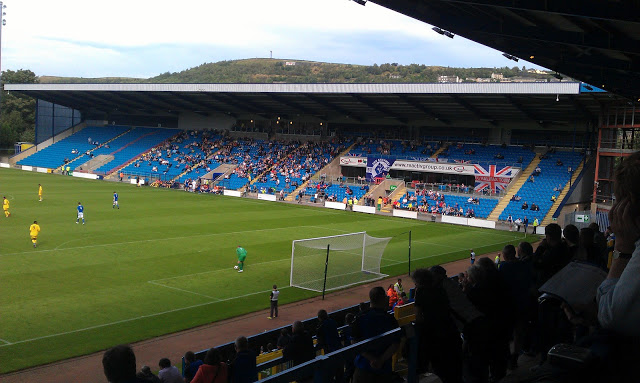 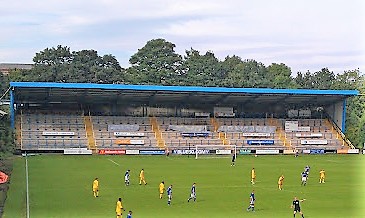 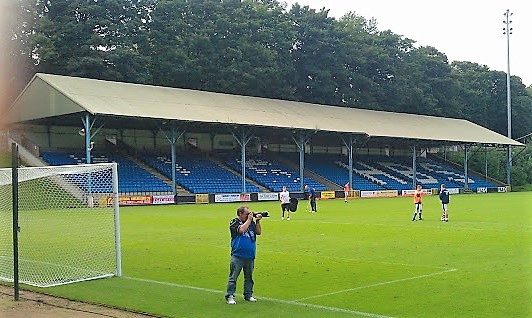 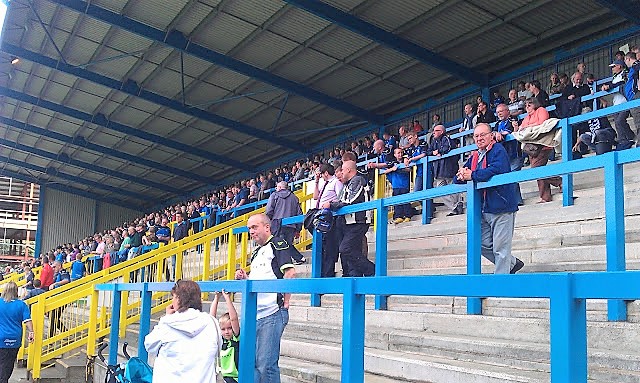 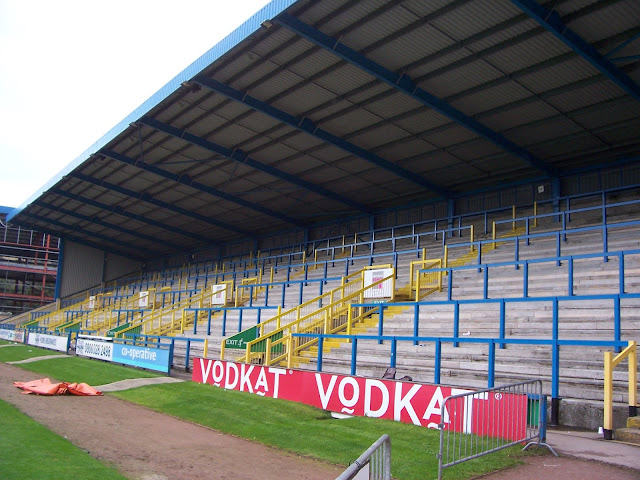