When the draw for the Carling Cup was made, I was initially thinking of going to this game. I knew the tickets would be fairly cheap and I had long wanted to go to a game at The Boleyn Ground, as part of my quest to tick off the 92 and see games at each of the stadiums. However, I was soon disappointed. Owing to the England v Holland match being scheduled for the Wednesday, all games were put back to the Tuesday. And I was going to Wycombe v Colchester that night. Then something strange happened out of the blue. A massive half week of rioting in London! This lead to the game being postponed (and the England match cancelled) and rearranged for a date I could actually make. We may not have a lot to be grateful to the scrotes that tore up our towns and cities in a pitiful display of neanderthalism, but it actually turned out OK in this case! 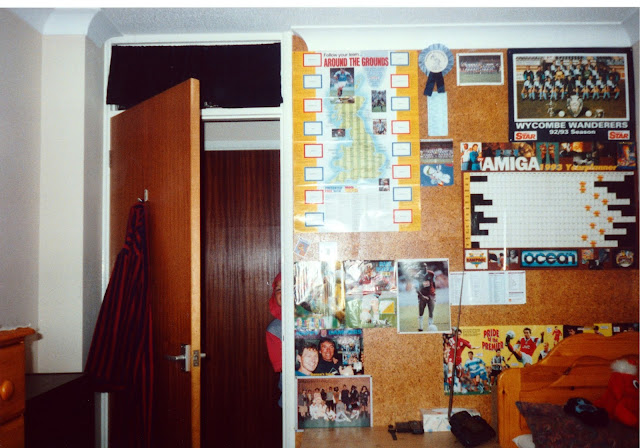 I'd actually supported West Ham as a youngster. They were my other love, after Wycombe Wanderers when school rules dictated that you had to have a "Premiership Team" So in the days of Ludek Miklosko, Tim Breacker, Julian Dicks, Alvin Martin, Ian Bishop and the like, I was an armchair West Ham fan. I had many enjoyable moments from afar - the 2-0 win at then successful Blackburn in September 1993, denying Manchester United the title with a 1-1 draw in the last game of the season a year later and Paulo DiCanio's memorable goal against Fabien Barthez at Old Trafford in the late '90s. Not to mention some of Harry Redknapp's crazy transfer deals - for every Di Canio, there's a Marco Boogers! But when I got a job, I started watching Wycombe full time and going away a lot, I realised that I could only give my love to one team and that West Ham was just a schoolboy crush. And it wasn't the same anymore. Players like Julian Dicks and Alvin Martin who would put their head on the block for the club were replaced by foreign mercenaries and journeymen who were only in it for the money. Much the same could be said of the current team, relegated despite having a squad of several decent players, they are now under the uninspiring stewardship of Sam Allardyce - hardly a pupil from the Academy of Football that previous West Ham teams were so famous for. 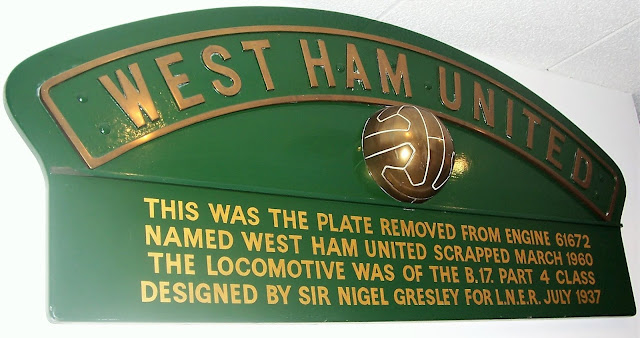 Anyway, as I was going with Paul to the game, it made better sense to go from West Ruislip station as opposed to my normal Amersham stop, to save going back on myself when I dropped him off home. So we left there around 4.30, after a few train changes we were in London Waterloo station, where we were due to meet Aldershot fan Laura, who turned out to be a lovely lass and she bought her Portsmouth supporting friend Manda along for the ride. As it was still half an hour before we were due to meet, Paul & I went for a pint at a pub across the road. Forgotten what it's called actually, not that it mattered as it was just a boring generic pub serving boring generic cider and taking very large amounts of boring generic money for the privilege. Over £9 for a bottle of Desperado and a bottle of Bulmers. The pub where we had actually planned to meet up was a bit of a gem really, a nice traditional pub that served a decent pint of Weston's Bounds Scrumpy on tap, and probably a lot more too, but it was that busy I couldn't investigate properly. After chit chat and another cool pint, we made our way to Upton Park, the tube station near West Ham's stadium, arriving at about 7.15. 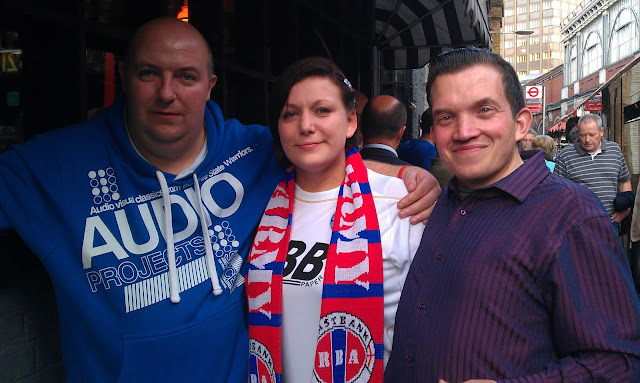 The area around the ground is certainly a multicultural and varied one. I can't think of any other grounds that have an Afro-Caribbean hairdresser, various halal meat butchers, restaurants of several nationalities and funeral directors right on its doorstep. I settled on a Pancake Roll and Chips (due to there being no Jamaican Pasties available!) before popping to the local shop to stock up on snacks and drinks to avoid the overpriced grub in the stadium. We took our seats right on kick-off. West Ham took the lead in the 16th minute when Junior Stanislas' 25-yard shot found it's way past former Wycombe keeper Jamie Young. West Ham continued to have the better of the chances but looking at the stats at half time, it was actually Aldershot who were edging the game. At the start of the second half, West Ham's Callum McNaughton was sent off for a professional foul. This lead to Aldershot really taking the game to West Ham and they were rewarded in the 77th minute when Luke Gutteridge finished after the keeper had parried the initial shot. And the hosts misery was complete 2 minutes time when Kirk Hylton finished well to seal a deserved victory for the Shots. I was really pleased for them but tried not to show it as I was in the West Ham end. The home fans roundly booed off the team at full time after an abject performance. So the latest in a long line of embarrassing cup defeats for the Hammers, not to mention struggling past the likes of Oxford, Farnborough and Emley. Their fans deserve better to be honest, time and again they are let down in cup competitions, it's something of an East-end tradition. We got back on the train after a long but quick queue, arriving back home around midnight. I eventually got to bed at 1, though I had to be up 3 hours later for work! 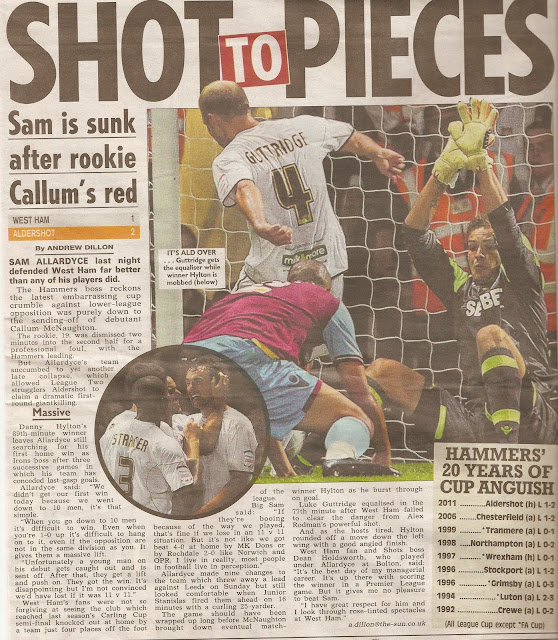 Typing this nine years on, as I tidy up this blog, West Ham now play at the truly dreadful 'London Stadium' thanks to poor ownership getting a deal on the cheap. Upton Park is sadly missed, with four separate stands that were close to the pick. Three of these were ultra-modern. The Trevor Brooking Stand and Bobby Moore stand were identical two-tier stands at either end of the pitch and these were built in the early 1990s to ensure that the ground game up to scratch following the 'Taylor Report'. The third new stand - the Alpari Stan was along the side and was set back slightly from the pitch. The one remaining stand housed the famous 'Chicken Run' - a place guaranteed to barrack both opponents and underperforming Hammers alike. 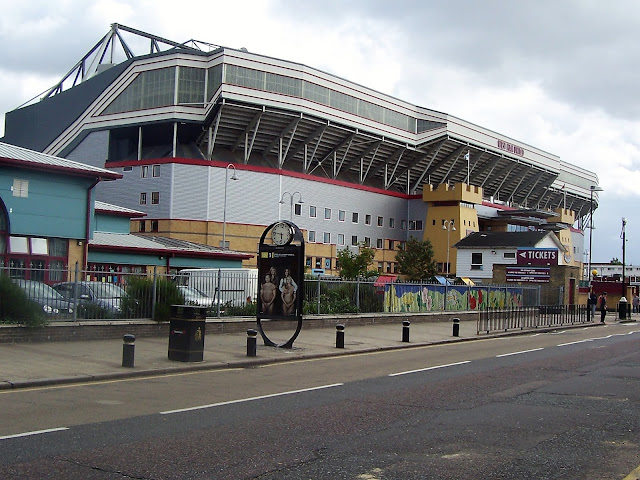 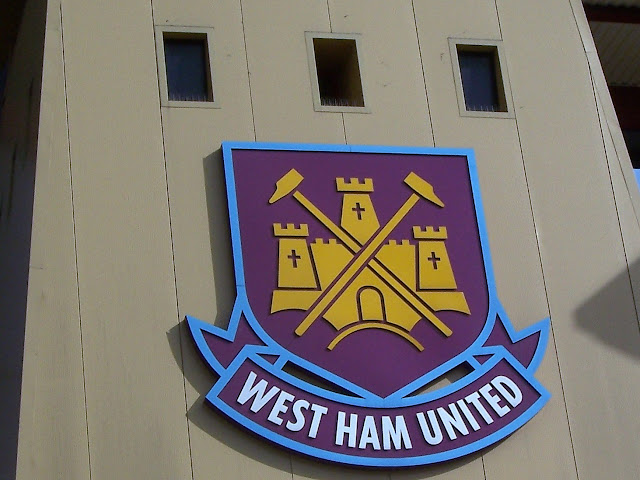 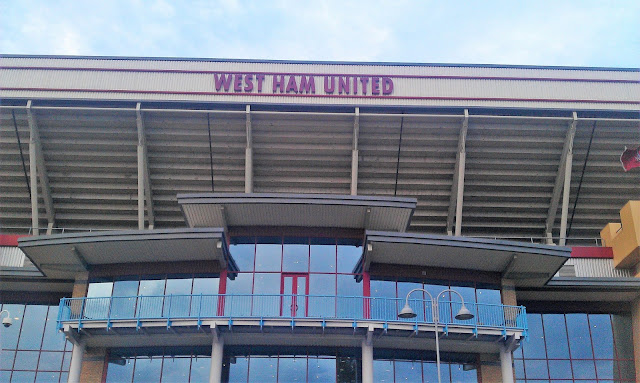 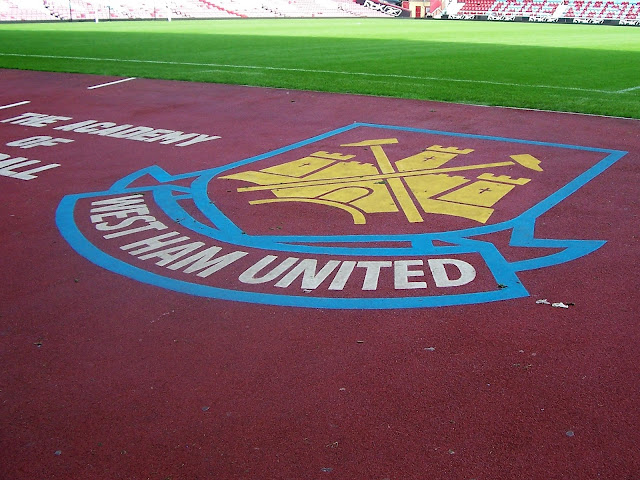 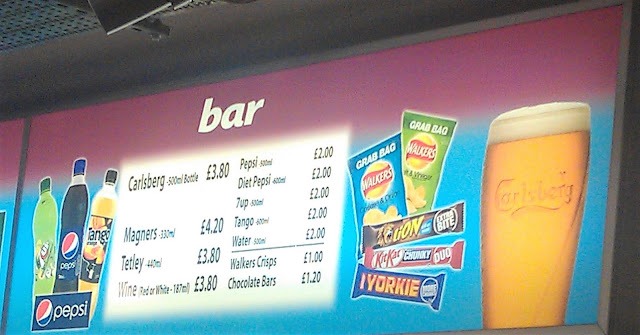 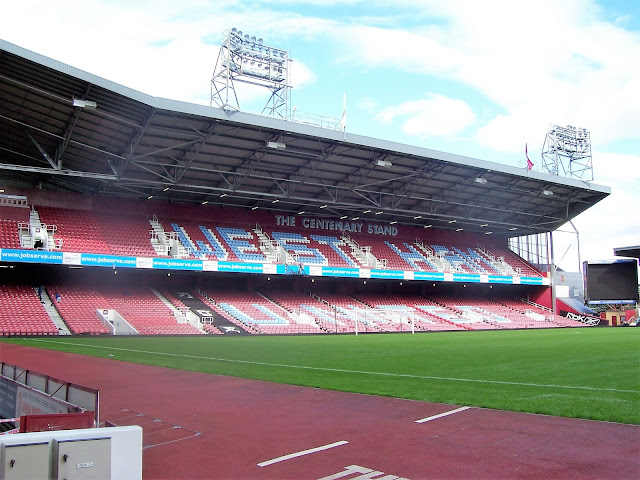 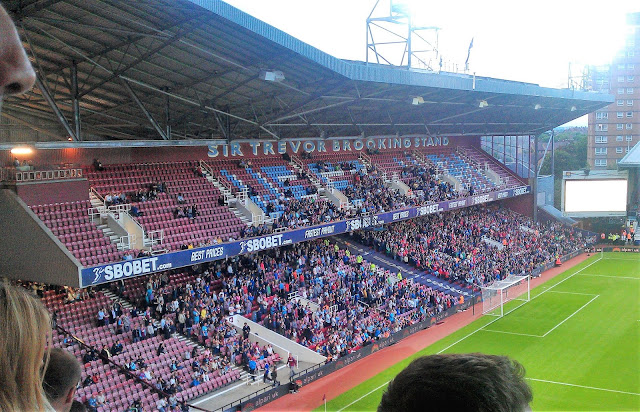 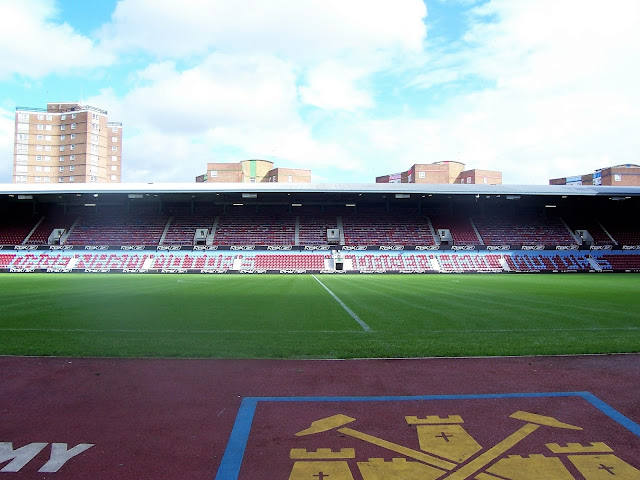 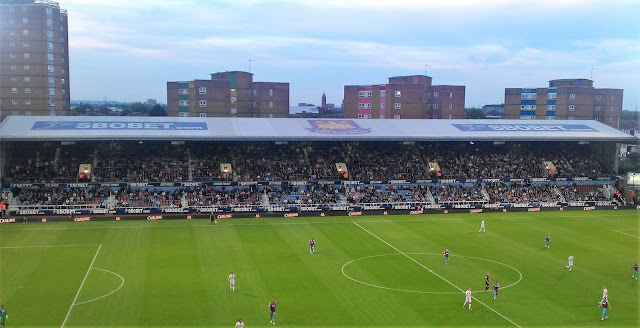 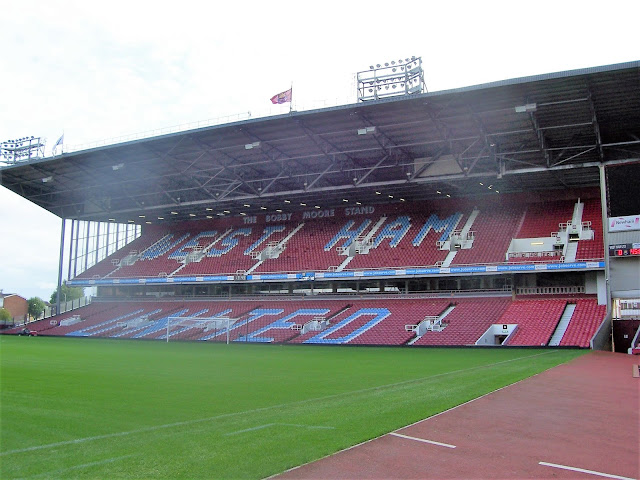 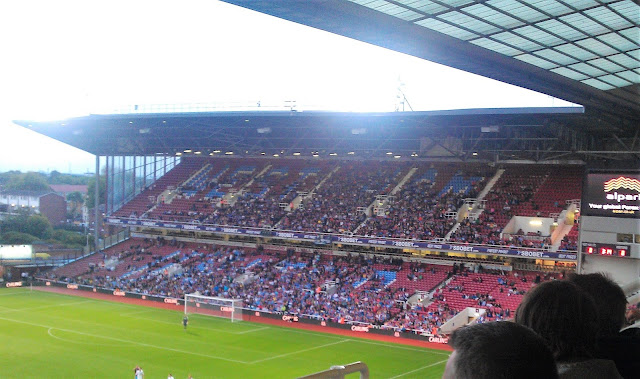 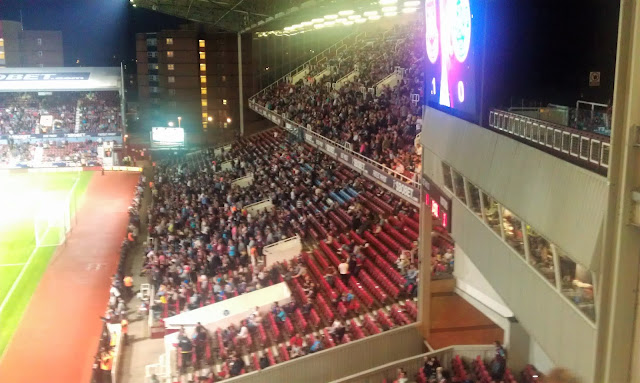